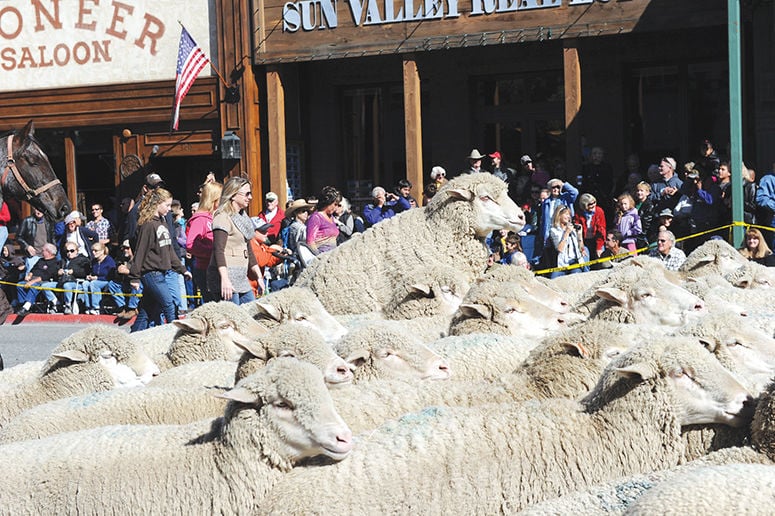 The highlight of the Trailing of the Sheep Festival is the sheep parade down Main Street in Ketchum. 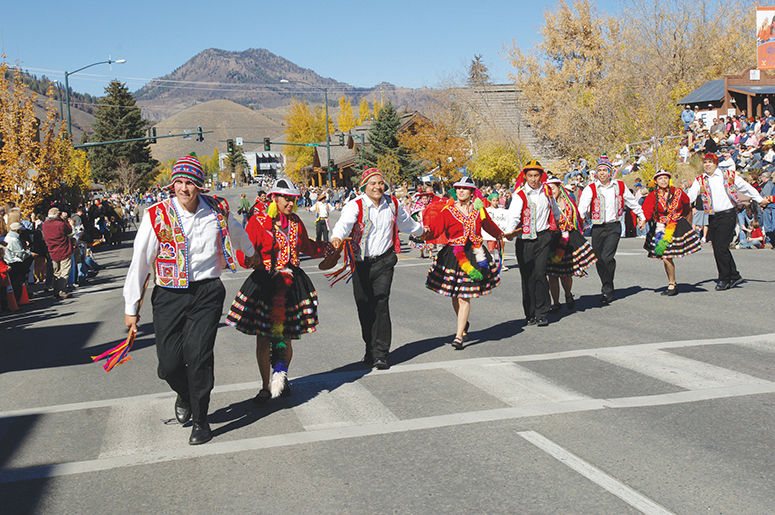 The Peruvian Dancers & Musicians are regular participants in the Trailing of the Sheep Festival.

The highlight of the Trailing of the Sheep Festival is the sheep parade down Main Street in Ketchum.

The Peruvian Dancers & Musicians are regular participants in the Trailing of the Sheep Festival.

Before the Trailing of the Sheep became a nationally recognized event, it was first a means to defuse the anger of bicyclist and rollerbladers who were getting sheep poop stuck in their wheels. Many did not know at the time that when the Wood River Trail System was constructed, portions were built on a sheep driveway that was dedicated in the early 1900s for grazing migration purposes.

John and Diane Peavey—who own Flat Top Ranch near Carey—took the growing voices of opposition to the tradition of herding sheep down the Wood River Valley each fall as an opportunity to educate, and so the Trailing of the Sheep festival was born.

Today, the coffee chats that the Peaveys held to share the culture and history behind the annual sheep migration has turned into a nearly week-long event that draws thousands of people to Ketchum to witness an event that “today, resembles a Smithsonian folk festival,” according to a November 1998 issue of the Sheep Industry Journal.

Sheepherding began to thrive in Idaho at the beginning of the 20th century. In 1918, the sheep population, at 2.65 million, surpassed the human population by six, according to the Trailing of the Sheep website. In 1936, the Sun Valley Resort opened, causing the Wood River Valley to grow in population significantly by the 1990s, and making the historic sheep migration a challenge.

“… [I]n recent years, moving the sheep has become increasingly difficult as the exploding population of the Wood River Valley spills out onto formerly undeveloped lands in the Pioneer Mountain Foothills,” wrote Diane Peavey in her book “Bitterbrush Country: Living on the Edge of the Land.” The Peavey’s created what would become the Trailing of the Sheep festival in 1996, by inviting locals to meet them at a local coffee shop, where the couple told them about the history of sheepherding in the area and integrating them into the process of getting the sheep from the mountains to their ranch in Carey to be transported south to California.

In 1999, the festival included a sheep shearing demonstration, a sheep herding display and talks by third-generation herders who shared tales of tradition, and the Folklife Fair spread over a three-day weekend. By 2007, cooking with lamb events had taken off, with restaurants promoting local delectable lamb dishes along with sheepherder bread-making, a hands-on demonstration of the art of Dutch oven baking. By 2014, the festival had tacked a Thursday onto its schedule, adding quilting events and cooking classes for the public, and had won a coveted Star Award from The National Committee of American Craft Week, which called the festival one of the top 10 festivals in the world. In 2015, the festival became what it is today, a five-day celebration with wooly fun events, talks, presentations and culture.

This year, spectators can expect to see a flock hailing from Faulkner Land and Livestock Co., based in Gooding. Since 1956, John Faulkner, a third-generation sheep rancher whose family has been in Gooding since the Great Depression, has run the sheep operation with his sons, Mike and Jack.

According to the Trailing of the Sheep website, the Faulkners’ sheep graze in the Smoky Mountains, to the west of the Wood River Valley, in the headwaters of the South Fork of the Boise River and near Fairfield. Their bands are also brought up the Wood River Valley and into the Sawtooth National Recreation Area north of Ketchum. The company operates on these public lands through agreements with the U.S. Forest Service.

Beyond the sheep, the parade will also have a single riderless horse in memoriam of three lives lost from the sheep family and industry in the past year. Trailing of the Sheep Executive Director Laura Musbach Drake said people memorialized either have family history involved in the festival or in sheepherding, were Basque or of Basque descendants or were supporters of the festival and its mission over the past two decades.

Astorquia died Sept. 3 in Gooding after a series of illnesses, according to his obituary in the Idaho Statesman. He was raised west of Gooding on a family ranch rich in Basque tradition and language.

Goitiandia was born in Murelaga (Vizcaya), Spain, in the Basque country in 1945. He moved to the U.S. in 1963 and passed away on April 20 of cancer. According to his obituary in the Idaho Mountain Express, he worked as a sheepherder for one year followed by another 53 years working throughout Sun Valley, including 30 years at Michel’s Christiania restaurant.

Lieder died on July 15 of natural causes, according to a story in the Idaho Mountain Express. She was a three-term Sun Valley mayor between 1981 and 1994 and a supporter of the Trailing of the Sheep Festival as a Sun Valley resident.

The parade will also include historic sheep wagons and participants from the Folklife Fair.

As in years past, Trailing of the Sheep coordinators ask that parade patrons be courteous in spectating by not bringing their dogs to the parade and staying on the curb at all times during the trailing.

“And when it was over, everyone collapsed, tired and dusty but understanding a little better about the place they call home.”

Diane Peavey, in “Bitter Country: Living on the Edge of the Land”

To close out the festival, locals and guests can attend a festival closing party on Sunday from 10 a.m. to 3 p.m. at Ketchum Town Square. This free event will have craft vendors and food by the Wood River Sustainability Center as well as drinks courtesy of Warfield Distillery & Brewery along with music by Cindy & Gary Braun from 10 a.m. to noon, and the Carolyn Martin Swing Band from 1-3 p.m. in partnership with the Sun Valley Jazz & Music Festival.

The Big Sheep Parade will take place at noon Sunday along Main Street in Ketchum.

Wolves died for your muttony!