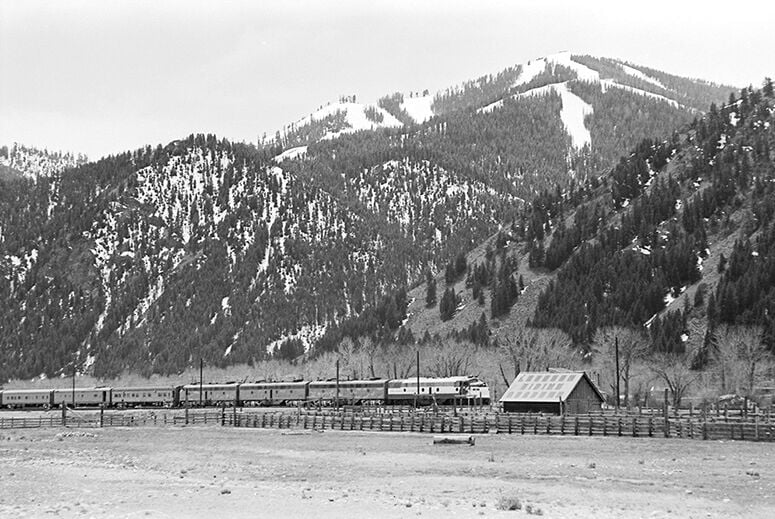 The 14-car passenger train Preamble Express was the last to arrive in Ketchum in May, 1975. 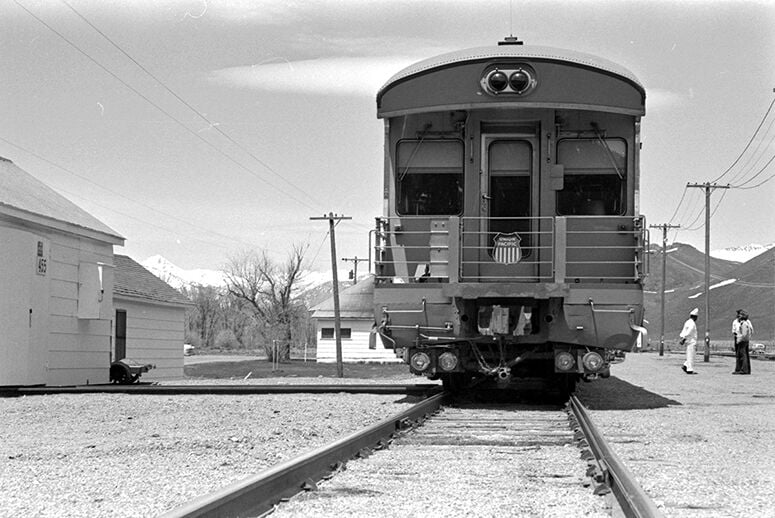 The Preamble’s caboose, with the Ketchum Depot on the left. This building was moved, and it collapsed under heavy snow the following winter. 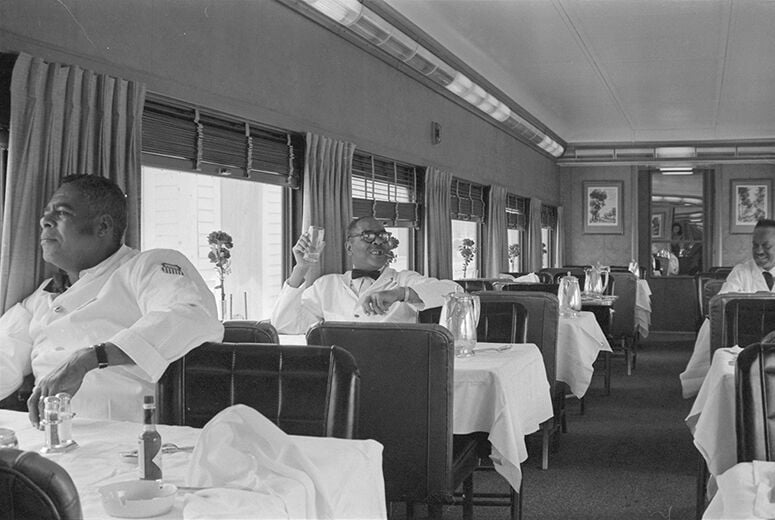 Porters await the arrival of students in the train’s dining car. 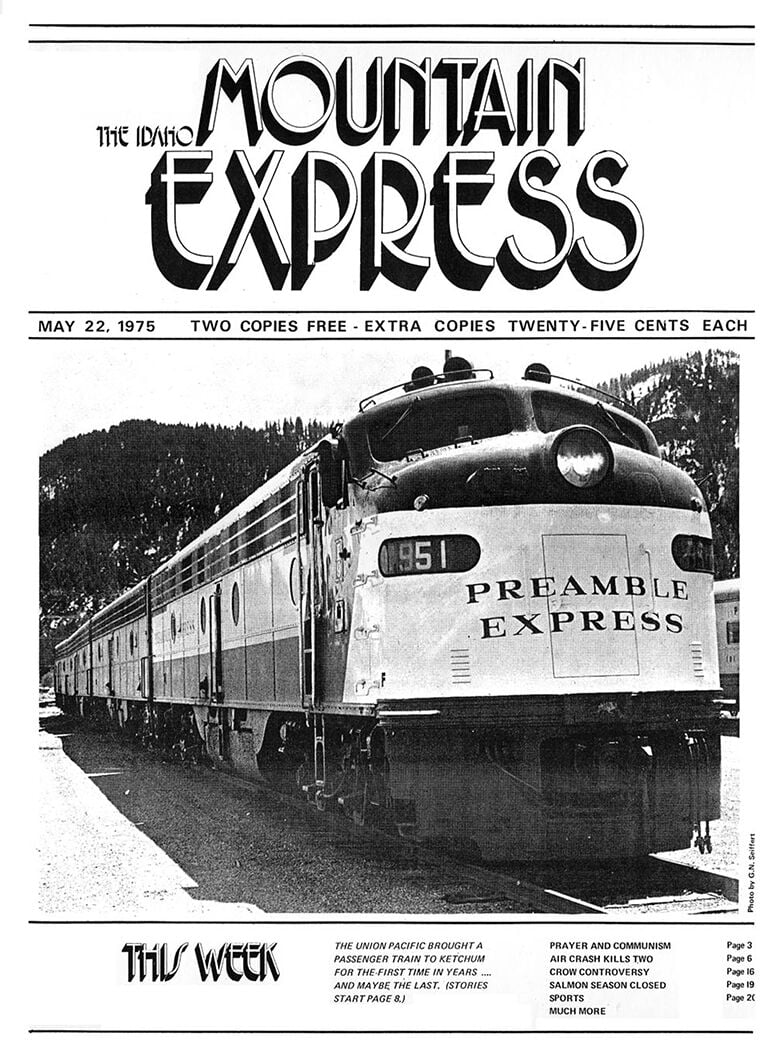 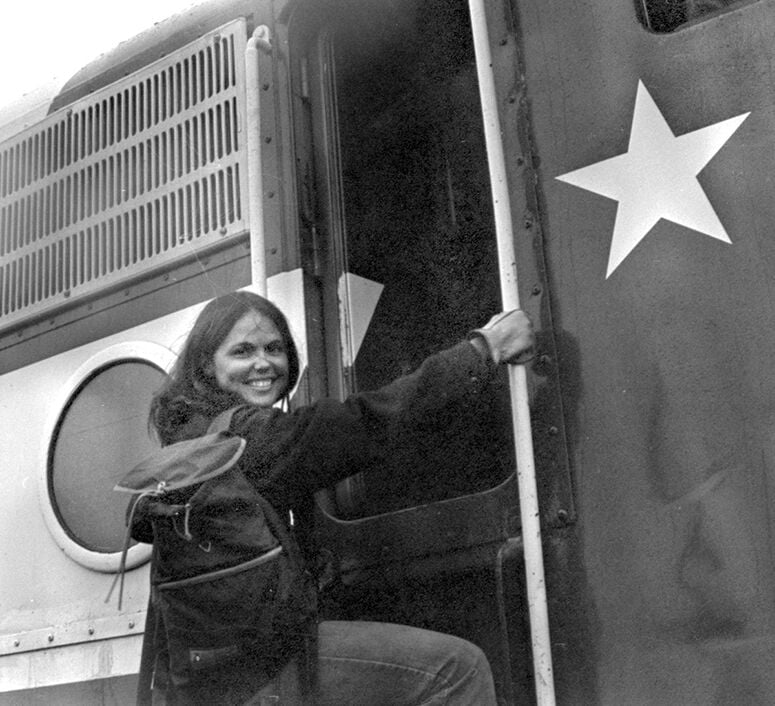 Special Authorization was granted to Idaho Mountain Express reporter Evelyn Backman to ride the Preamble Express locomotive from Shoshone to Ketchum yesterday morning. In giving his permission, Union Pacific President J.C. Kenefick said, “There hasn’t been a passenger train here since 1968, and there may never be another.” 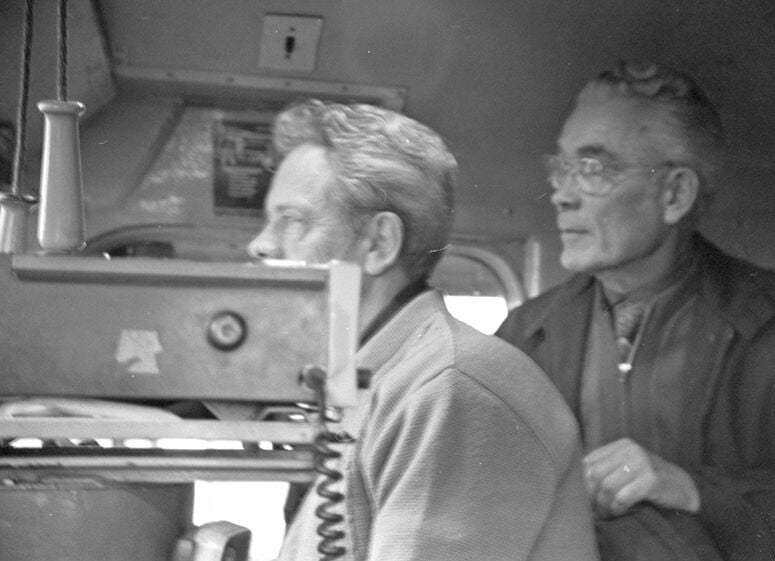 Engineer Woody Woodworth and Trainmaster Morris Muck in the cab of the engine. 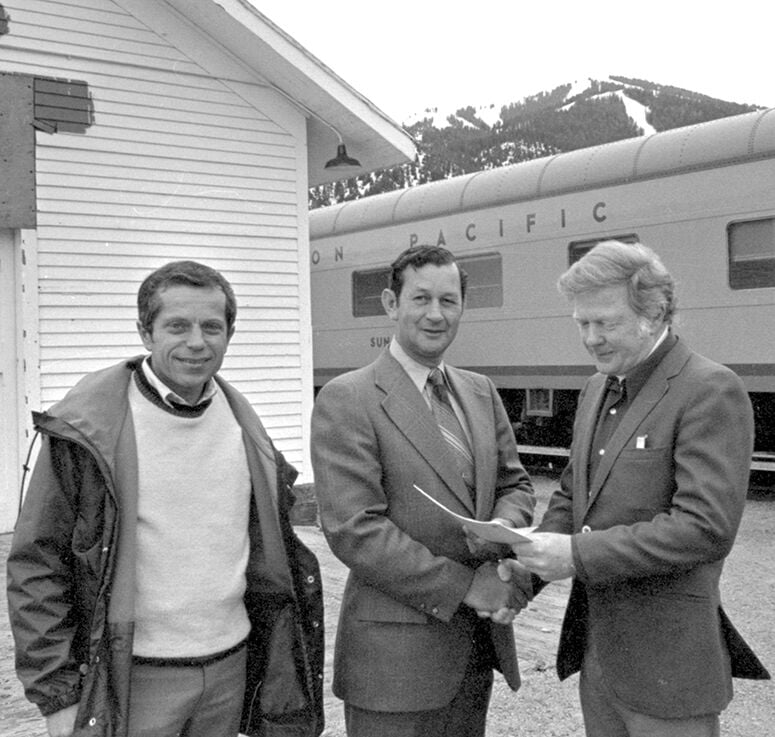 Union Pacific’s Director of Public Relations Ed Schafer presents Ketchum’s mayor Bill Brandt, right, with the deed to the Ketchum Depot with the condition that the city move the building. City Administrator Chuck Corwin stands on the left. 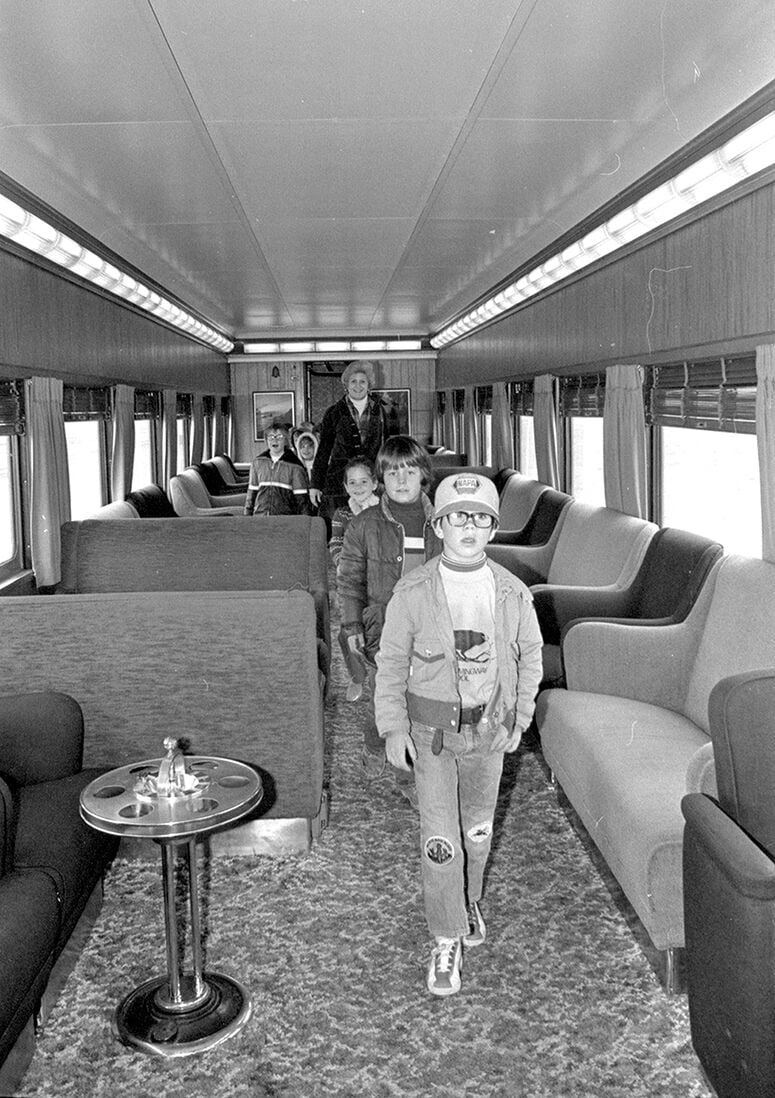 The 14-car passenger train Preamble Express was the last to arrive in Ketchum in May, 1975.

The Preamble’s caboose, with the Ketchum Depot on the left. This building was moved, and it collapsed under heavy snow the following winter.

Porters await the arrival of students in the train’s dining car.

The railroad—and the Union Pacific Railroad Company that ran it—shaped the valley we see today as much as any entity or industry. It, quite literally, built Sun Valley Resort. Some 45 years ago, it sent its last-ever passenger train up the Shoshone-Ketchum line. Idaho Mountain Express reporter Evelyn Backman—now Evelyn Phillips, president of the paper’s board of trustees—rode along. A version of this story originally published in 1975.

Last Sunday, a fourteen-car Union Pacific railroad passenger train rolled into the Ketchum depot. Disembarking were about 130 executives of the line, including the president, who spent the next three days in Sun Valley on a special board meeting. The train had come all the way from Omaha, Nebraska; it went back to Pocatello that same Sunday and returned to pick up its passengers Wednesday morning.

They kept the best cars too, one of the porters said. The 14 cars which came to Ketchum were in excellent condition. The sleeper cars had names painted on the outside, which all played on a “Sun” theme: “Sun Skies,” “Sun Slopes,” “Sun Point,” “Sun Manor,” and so on. Of the two lounge and bar cars, one was domed in glass. The dining car was lined on both sides with tables for four; white linen tablecloths, silver-plated utensils and a crystal vase with a red rose adorned each one.

Cars 100 and 101 belonged to the president and vice president of the line. These cars were identical, each with a compact kitchen, a dining room, two fair-sized bedrooms, which shared a bathroom, a secretary’s room, employees’ room, and a study in which the desks featured a built-in speedometer, brake pressure gauge and a clock. The kitchens in these cars (and in the main dining car) were filled with stainless steel cabinets that could store enough food for one month in the president’s and vice president’s cars, or for 1,300 people in the main dining car. The stove was heated with presto logs; the perishables kept cool with dry ice. The kitchens were full of goods on these trips: the liquor cabinets well stocked, the silver trays laden with nuts, and cigarettes and chocolate mints lay around in the lounge cars.

When the Union Pacific passengers had left the station for Sun Valley in buses last Sunday, the porters (almost all of whom were Black), engineers and train masters were the only ones left. Several bystanders asked and were invited to tour the train. Many of the porters said they had been working for Union Pacific a long time, 25 to 30 years, and several would soon be eligible for retirement.

This summer, the Preamble Express will bring two conventions of Union Pacific Old Timers and Junior Old Timers to this area, but the train will stop at Shoshone, with the rest of the distance having to be covered by bus.

“After those we’ll do a trip to Las Vegas,’’ one porter said, ‘’and then there’s nothing ’til next year.”

On Wednesday, when the train returned to Ketchum to reload, all 300 of the elementary school children of the Hemingway School were invited to board the Preamble Express. The older children had a chance to go into the cab of the locomotive, and all the students and teachers walked through a sleeper car, the bar cars and the dining car. The children were obviously enthralled.

On Wednesday, too, Union Pacific officials presented Ketchum’s mayor with a deed to the white Ketchum station building. The city plans to make a museum out of it. The only condition Union Pacific made on the gift is that the city must move the building off the railroad’s property.

Just before 7 a.m. on Wednesday morning in a light rain I met train master Paul Wyatt at the Shoshone railroad depot, according to prearranged plan. We then drove out to a railroad crossing east of the station, Wyatt talking to the train on his radio. When the 14 cars and four engines of the Preamble Express reached the crossing, they stopped to let me climb into the cab. Woody Woodworth, who has been with Union Pacific 25 years, was driving; Morris Muck, a Union Pacific veteran of 40 years and a train master, rode along. On freight runs, he said, the Interstate Commerce Commission doesn’t require more than one engineer in the cab; for passenger trains it takes two.

The train took off towards the north at a speed not over 45 miles an hour. Muck explained that this was because of the poor track bed between Shoshone and Ketchum. The bed must be constantly maintained, he said, and periodic shoring up is necessary to keep both rails level. Before the Preamble Express made its Sunday run to Ketchum, he said, a fair amount of work was done on the tracks to get them in shape.

The diesel locomotive we rode in seated three, with standing room behind the seats and a door on either side. The instrumentation and controls were simple. The driver had one throttle, which moved to eight different positions. He also had in front of him two levers for two sets of hydraulic brakes. One braked the engine only; the other braked the engine and all the cars. Gauges to the left of these levers showed brake pressure.

Then there was a foot pedal called the “Deadman’s Pedal,” which the driver depressed all the time the train was in motion. If the pedal were allowed to spring up, such as in the case of the hypothetical heart attack, the train would stop. Also, if an air pipe between cars broke, an emergency brake would stop the train. Other than a whistle pull, a speedometer, some light switches and so on, there was not much more in the way of train controls. There was a radio in the cab with which the engineers could communicate with train masters, stations, and even a telephone operator who could then put through a regular call.

Yet it took about three or four years to train an engineer to the point that you could really feel confident with him, Muck said. He went on to describe the lengthy training and schooling process, which included classroom instruction which took about a year and a half.

“It takes a special feel to run a train,” he said. “You just need a lot of experience.”

The Preamble Express locomotive was capable of traveling 120 to 130 miles an hour, but the Interstate Commerce Commission set the speed limits, and 90 miles an hour was the maximum on tracks where the lights and switches were controlled through a central office. Muck said that even so, the train would probably run at 70 miles per hour when it hit the main lines. Freight trains were required to go about 10 miles per hour slower.

We passed through some farms and open grazing lands on the way to Richfield. As the train passed, any horses or cattle near the track turned and ran away. At one point a small dog ran along the middle of the tracks, and the train slowed down until he jumped out of the way. Morris said that the trains frequently find cattle on the tracks.

“Sometimes you come across them coming around a corner,” he said, “and you’re going too fast to stop.” He then mentioned the problem trains have with railroad crossings. ‘‘Last year was the worst we’ve ever had for accidents,” he said, “but what can you do when you’re going 70 miles an hour and it may take a mile or so to stop?”

He said that engineers report license plate numbers of any near-misses which they can catch, or on vehicles like school buses that fail to stop.

The trip of 69 miles from Shoshone to Ketchum took almost two hours, yet it seemed to pass like 15 minutes. After Richfield, the rain let up and the mountains came into view across the river. The track crossed U.S. 93, then crossed the hills which separate the Wood River Valley from the desert below. The train went through Picabo, then headed north to Bellevue. Each time the train approached a crossing, Woodworth blew the whistle four times.

As we approached Ketchum, Muck talked more about the track. He said the main line tracks had bigger ties, nine feet long instead of eight. Each tie, he said, was so saturated with creosote that it weighed about 200 pounds. Each tie, he said, cost $14.

Along the length of each rail there were metal grippers called creepers, which prevented the rail from expanding and slipping in the hot sun. Once in a while the creepers would fail and the rail would snake out of shape. The speeds were so precisely engineered on given curves, he added, that it was known exactly what speed would make the train tip over. When a train took a curve too fast, he said, it tore the rail and ties out of their bed until they reached the tip-over point.

The train pulled into Ketchum and looped to turn around. One year, Morris said, the train was so long that when the engine had completed the loop, the last car was only 15 feet into the start of it. “We almost didn’t make it,” he said.

With the train stopped at the depot, pointing south, I climbed down from the cab. I wondered if we would ever see one like it again.