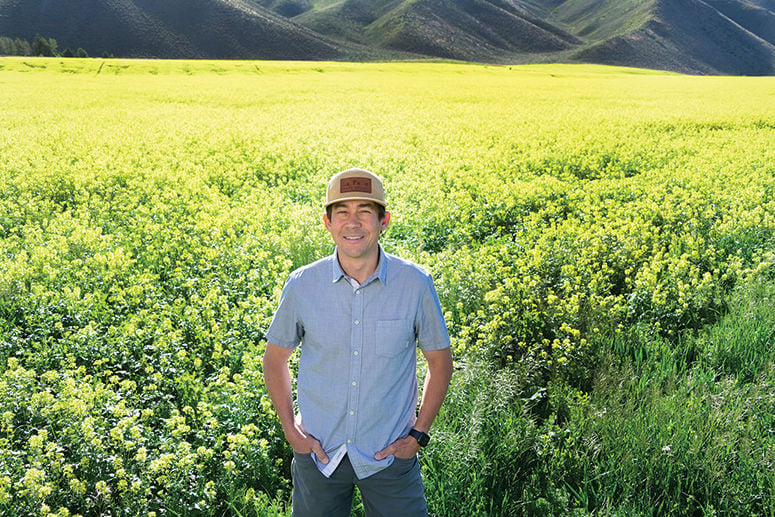 Josh Wells, photographed here in front of a mustard field in Bellevue, makes small batches of artisanal condiments in Hailey. 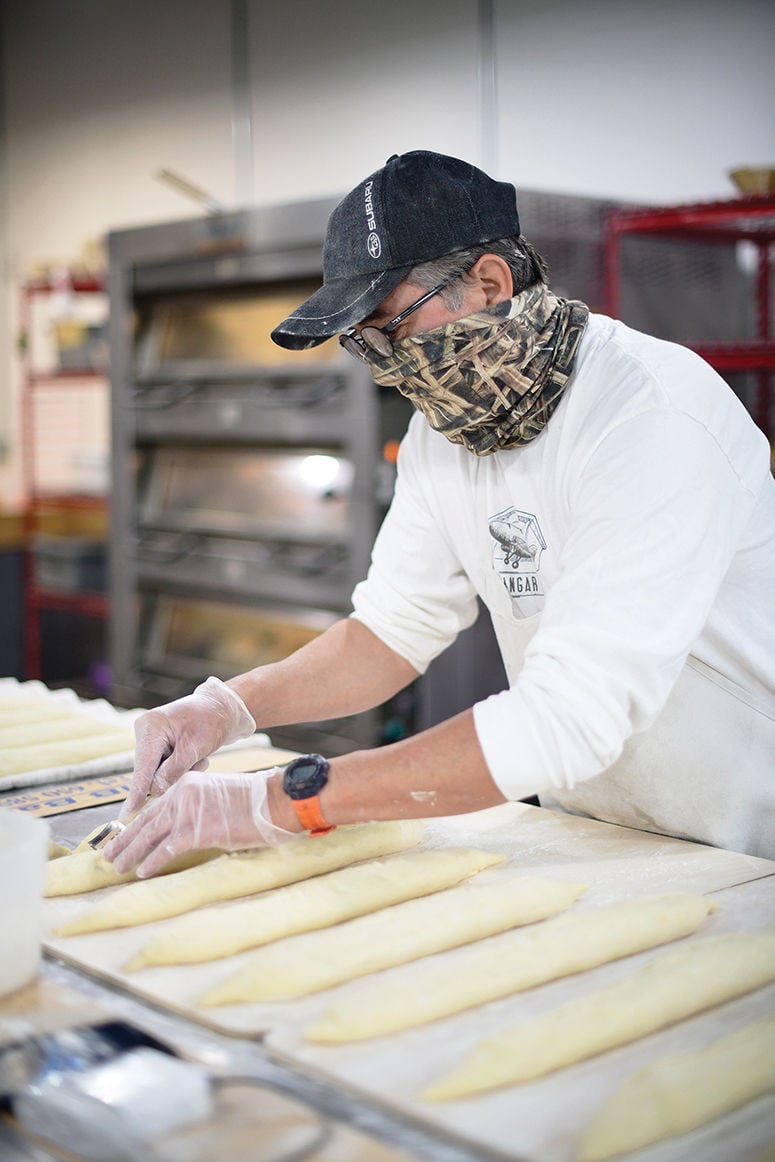 Roman Chavez’ Hangar Bread has weathered the COVID-19 pandemic at its headquarters in Hailey. 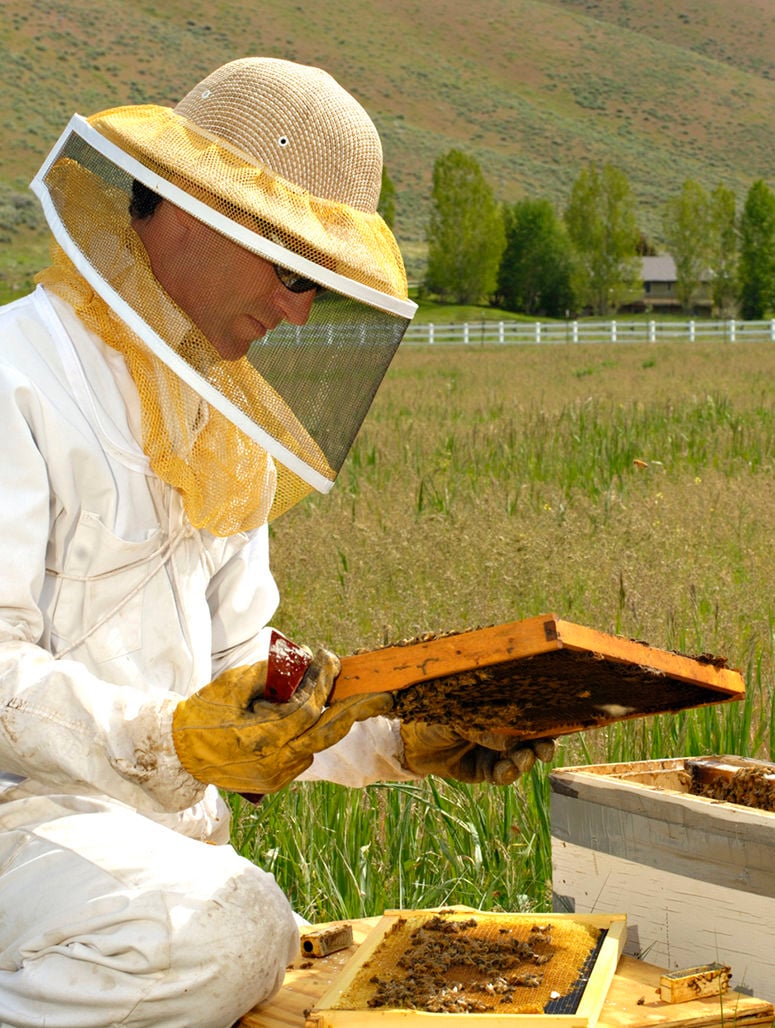 Tom Harned tends to his bees in the Bellevue Triangle

The Wood River Valley has been struggling for decades to diversify its tourism-based economy, and one business area that has been expanding is locally made food products. The owners of three of them—Sun Valley Mustard, Five Bee Hives Honey, and Hangar Bread—say they’re doing well despite the COVID-19 pandemic—popularity proven by their top three spots in the local product category of this year’s Best of the Valley. The Express checked in with the three medalists to find out how they’re weathering the economic storm.

Roman Chavez opened Hangar Bread last October in Hailey and was soon going gangbusters and struggling to keeping up with orders for his artisanal breads.

“Our first year in business I was overwhelmed,” said Chavez, 56. “I didn’t think I could keep up with the demand. We were inundated with orders for Thanksgiving and Christmas. I got a little burnt out, to be honest. I love living here. I was working too much before the pandemic.”

Chavez started baking several years ago as a sideline while working as a jet fuel broker at an airport in his hometown of Long Beach, Calif. After taking a trip to Europe with his wife, Rachel Schochet, he decided to attend the San Francisco Bakery Institute to learn how to bake the kinds of breads they ate while touring France.

Instead of giving up his day job, Chavez had an industrial oven delivered to a hangar (hence the company name) and built his clientele among the 200 Federal Express and other airport workers.

In March, the Meriwether Building, Hangar’s headquarters in Hailey was “ground zero” of the pandemic, with one of the first cases in the valley. The building shut down quickly and Chavez prepared for the worst, but within two weeks he had some calls from NourishMe in Ketchum and Kraay’s Market south of Bellevue.

Chavez went back to baking with assistant Jorge Martinez and soon was making four times as many deliveries as before the pandemic. He also baked some rolls for The Hunger Coalition in his free time.

“The deliveries are what really sustained me through this,” Chavez said. “But what really gave me peace of mind was getting a letter from Wilderness Investors Inc. and Eagan Real Estate, the owners of the Meriwether Building, that said we didn’t have to pay rent for two months. This was huge and for me and everyone on the building. I knew then that I could at least bake and sell enough to pay the electricity bill. It was a huge relief.”

“It wasn’t my plan to have cinnamon rolls be the star if the show, but that’s the way it goes sometimes. Over Christmas we sold 300 in one day.”

Tom Harned Five Bee Hives started making honey 10 years ago after learning the art and business of beekeeping from a friend. He started with five hives in the Wood River Valley and now has 900, with half located in Three Forks, Mont. Each hive produces about 25 pounds of honey each year, Harned said, meaning his bees can crank out around 11.5 tons of honey a year. That’s almost as much as the weight of an average school bus.

“My goal has always been to provide local honey in the Wood River Valley,” Harned said. “But the other half of my honey is sold on the open market in Montana.”

Like many apiculturists, Har-ned travels with the seasons. He gathers his hives and trucks them west during winter to pollinate almond trees in California, and apples and cherries in Washington.

“It’s a way to help make ends meet in the honey business,” he said. “And beekeepers are naturals at social distancing. When you start unloading bee hives off a truck you can pretty much open up a swath through a crowd of people.”

By late April, about half of Harned’s bees are back at 15 locations scattered around the Wood River Valley, feeding on new dandelions and then on mustard blooms on a farm on Gannett Road, or fresh blooms of alfalfa elsewhere in the Bellevue Triangle before farmers’ fields are cut.

“They like clover, rabbitbrush, bitterbrush and fireweed,” Harned said. “Anything that has a flower, they will go for it.”

Many of Harned’s customers buy Five Bee honey because his bees are going after local nectar, and bringing back some local pollen, which many claim helps fight localized allergies. In any case, these bees are working hard to bring sweetness to the community.

Harned said a single queen bee can live for three years, far beyond the six-week lifespan of the colony’s summer-born worker bees. She produces up to 1,500 eggs per day in high season, reducing that number sharply in the fall and winter.

“But when the dandelions bloom again in the spring, that’s a trigger,”

Harned said. “She builds back up the hive enough to produce honey.”

Josh Wells’ Sun Valley Mustard company has won numerous local, national and international awards, including gold and silver medals at the National Mustard Museum (Yes, there is such a place!). Founded in 1984 by Lois Allison, aka the Mustard Lady of Ketchum, the company changed hands a few times before Wells came to town and purchased it in 2011. He diversified Allison’s original 50-year-old recipe into several flavors and expanded operations and distribution.

Wells ran a coffee shop with his partner, worked on Capitol Hill as a staffer, studied philosophy and earned a law degree before settling in as a moutardier (Yes, there really is such a thing!). He also owns a photography business in Ketchum and can be found flying a drone from time to time to capture a higher perspective on life.

The pandemic’s disruption of the grocery business took a toll on the company’s supply chain for raw materials, leading to a temporary shortage of eggs and sugar.

“We also couldn’t find squeeze bottles because everyone was using them for hand sanitizer,” Wells said.

“The deliveries are what really sustained me through this.”

“Beekeepers are naturals at social distancing. When you start unloading bee hives off a truck you can pretty much open up a swath through a crowd of people.”

“We also couldn’t find squeeze bottles because everyone was using them for hand sanitizer.”