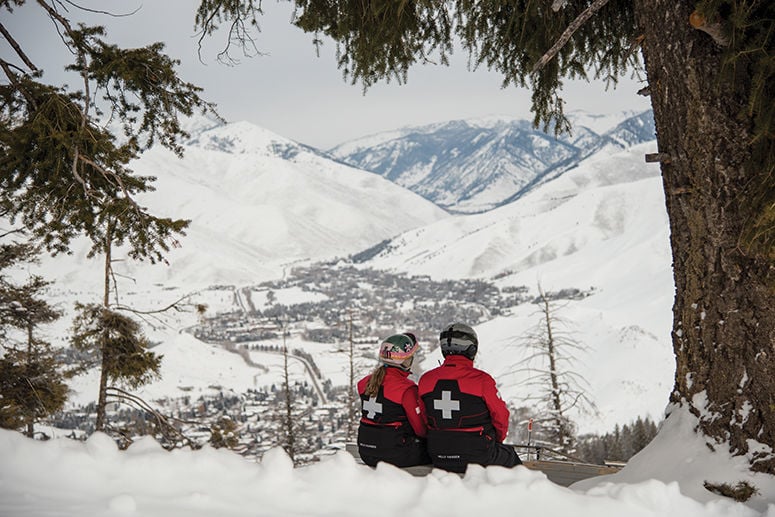 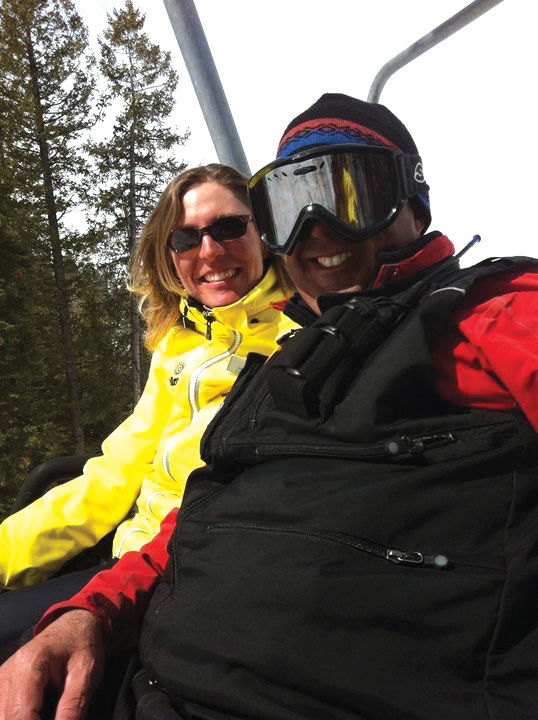 If absence makes the heart grow fonder, so too must another’s presence—at least that seems to be the case for Ted and Angie Tuma. Each workday, each winter, for nearly a decade, the couple has served resort-goers as members of the Sun Valley Ski Patrol. Skiing together isn’t just a job for the easygoing, outdoorsy pair; it’s the bedrock of a love story that’s as ‘Sun Valley’ as skiing itself—Austrian ski instructors and all.

“You can’t make it up,” Angie said over an après beer with Ted in January, marveling at their uniquely Ketchum story. “This really happened.”

It was 2010 and Sun Valley was kicking off its 75th season in style, replete with powder and a newly built gondola to the Roundhouse. More than 1,000 feet above, Ted Tuma was working his fourth season as a patroller, a job the Twin Falls native had taken in part out of practicality, but primarily to join his friends and further his love of skiing between summers spent guiding on the Middle Fork.

“When I got here in 1995, I think I paid $1,200 for a season pass, which was a lot but it was sort of doable,” he said. “By the time I got on ski patrol the passes had gone up ... so I needed to find a way to continue my skiing habit. It was way harder back then—there wasn’t as much turnover, so they only hired a few people each year.”

With a youth spent skiing at Magic Mountain and Pomerelle, and college years skiing the Wasatch, Ted was at home in the mountains, especially on skis. And as with so many now-longtime residents, when Ted moved here after college 25 years ago, “I was only going to stay here for one year and I never left.”

Elsewhere on Baldy that winter, Wood River Valley native Angie Cameron was serving not in a patrol uniform, but in a yellow jacket—the early days of Sun Valley’s Guest Services skiers and riders.

“I grew up skiing here, my mom taught me how to ski. I really didn’t think I’d end up being a ski patroller,” she said. “I graduated college and moved back to this area and kind of had this in the back of my mind.”

And then, “I met some guy,” Angie said with a grin.

It happened, of course, at Free Beer Fridays at Grumpy’s—back when patrollers would bring other departments to socialize over courtesy beers at the longtime après watering hole.

“We just kinda hung out and started talking to each other,” Angie said. “I didn’t think he liked me.”

“We were just friends,” she said. “I was actually trying to date this Austrian ski instructor. He was very Austrian, he had the accent.”

Ted was also working the new gondola at night, ferrying diners to the Roundhouse alongside Angie’s brother, Thomas. One night Angie and the Austrian took a ride up the mountain.

“Ted told Thomas, ‘I don’t know why she’s hanging out with that guy,’” Angie recalled, “and it got back to me. That was kinda bad. It’s funny to look back on it now.”

“I just remember asking Thomas a bunch of questions about you,” Ted said.

But none of Ted’s confusion or inquiry, nor her friends’ insistence, swayed Angie.

“The girls on Guest Services kept saying, ‘Ted really likes you, you should try dating him,’” Angie said. “And I was like, but we’re really good friends. I just didn’t see it.”

As the season progressed, things weren’t poised to change. Spring had arrived, Ted was eyeing another summer on the river and Angie, with a deep equestrian background, was set to begin grooming dressage horses boarded here by part-time residents from California. Summer 2011 was on the horizon, ski season was winding down and things were warming up.

“And then the end of the season rolled around,” Angie recounted from a booth at Lefty’s. “We worked the last day at Dollar and we ended up coming in here. I gave him a ride home and that was when it happened: He kissed me and I let him out of my car.”

Or, as Ted remembered it, “She kissed me and said, ‘Get out of here.’ And then I called her every day for a ride to work.”

“That summer before, I went on the Middle Fork. We put in at the ramp at Boundary Creek,” she said. A group of guides were doing a deadhead, rowing empty rafts downstream. Ted was one of them. “I remembered his face,” Angie said. “We kind of put two and two together.”

And now, they too were together, with Angie joining Ted on two Middle Fork trips that summer and spending two weeks at Angie’s employers’ getaway in the Caribbean.

“We’d gone out to dinner with Angie’s employers and they casually mentioned that they had this place in the Virgin Islands,” Ted said, and “‘Anytime you want to go down to the Caribbean you just call us,’” Angie added.

Reflecting now on their first major trip as a couple, Ted wondered aloud.

“That was probably cementing the deal, right?” he asked.

But if that didn’t do it, “Then we went on the Grand Canyon and that’s the ultimate test,” Ted said. “We all passed.”

Summer blended into fall and fall hardened into winter, skis replaced boats, snow flew and Ted and Angie moved in together ahead of the 2011-12 season. Ted was back on patrol, Angie back in yellow.

But, already armed with the requisite education, “I got on the patrol last-minute, the middle of December,” Angie said. “Somebody quit and they put me in that position. I was ready to be on there.”

Years passed with what proved to be a winning formula: Ted guided on the Middle Fork in the summer while Angie worked with Swiftsure Ranch, and the pair patrolled together in the winter, squeezing in as much time together in the outdoors as they could, on and off the clock.

“We spend a lot of time together,” Ted said.

“We do find times at work where we’re not together,” Angie said. “I’ll go days at a time where I don’t see him [at work].”

“You can’t let your girlfriend go to France without some kind of commitment, right?” Ted joked. That was kind of the moment that we decided we should get engaged so that, you know, there’s a clear message over there.”

Each slack season, the couple made a pilgrimage to Moab, Utah. That fall, at Tower Arch in Arches National Park, Ted said, he “hiked up to a cool spot and asked the question.”

“Except you didn’t have a ring!” Angie reminded him through laughter.

And off she went to France for the 2015-16 season, racing to keep up with European patrollers who out-skied nearly everyone, she said, and delivered a helping of friendly teasing to their newfound American compatriot—especially when Ted visited mid-season.

“The French patrollers would always tease me constantly,” she said. “They would say, ‘I saw Ted and he was with a black-magic woman!’”

Once Angie was back stateside around April 2016, it was time to plan a wedding—nothing “frivolous,” she said, but something in a beautiful, nearby locale with significance to the couple.

Wild Horse Creek Ranch fit the bill—Angie, a geology major, did her field session nearby and worked on her senior thesis in Wild Horse Canyon.

“It was a perfect place to do it,” she said. “You look right up the canyon and see the Pioneers.”

If the venue was perfect, the weather wasn’t as certain. The day of the wedding, Oct. 1, 2016, was a tumult of thunderstorms enveloping the nearby Pioneers.

Then, on cue, the clouds parted for the wedding, and shortly thereafter an eclectic crowd of friends and family gathered for a toast—quoting Edward Abbey, no less—to kick off the reception. Wedding-goers partied into the early morning before wandering off to sleep.

They took autumn with them. The next morning, the newlyweds and their guests awoke to 5 inches of powder shrouding the landscape, harkening what would become Sun Valley’s all-time record winter.

And that meant back to work for Ted and Angie, where their co-workers had acclimated to a couple working in the high-stakes environment of snow safety and first-response.

“We’re not the only couple, but we’re the only married couple,” Ted said. “It was fine.”

Their secret, if there is one: more skiing, of course.

If that wasn’t enough adventure, the couple just opened a business together, Idaho River Rentals, providing raft rentals delivered to the put-in.

But for now, Ted and Angie are once again patrolling the slopes at Sun Valley together, looking forward to even more professional and personal adventures in the outdoors—together.

Angie recalled, “One thing Ted’s dad told me before we got married was, ‘You better like to sleep in a tent.’”