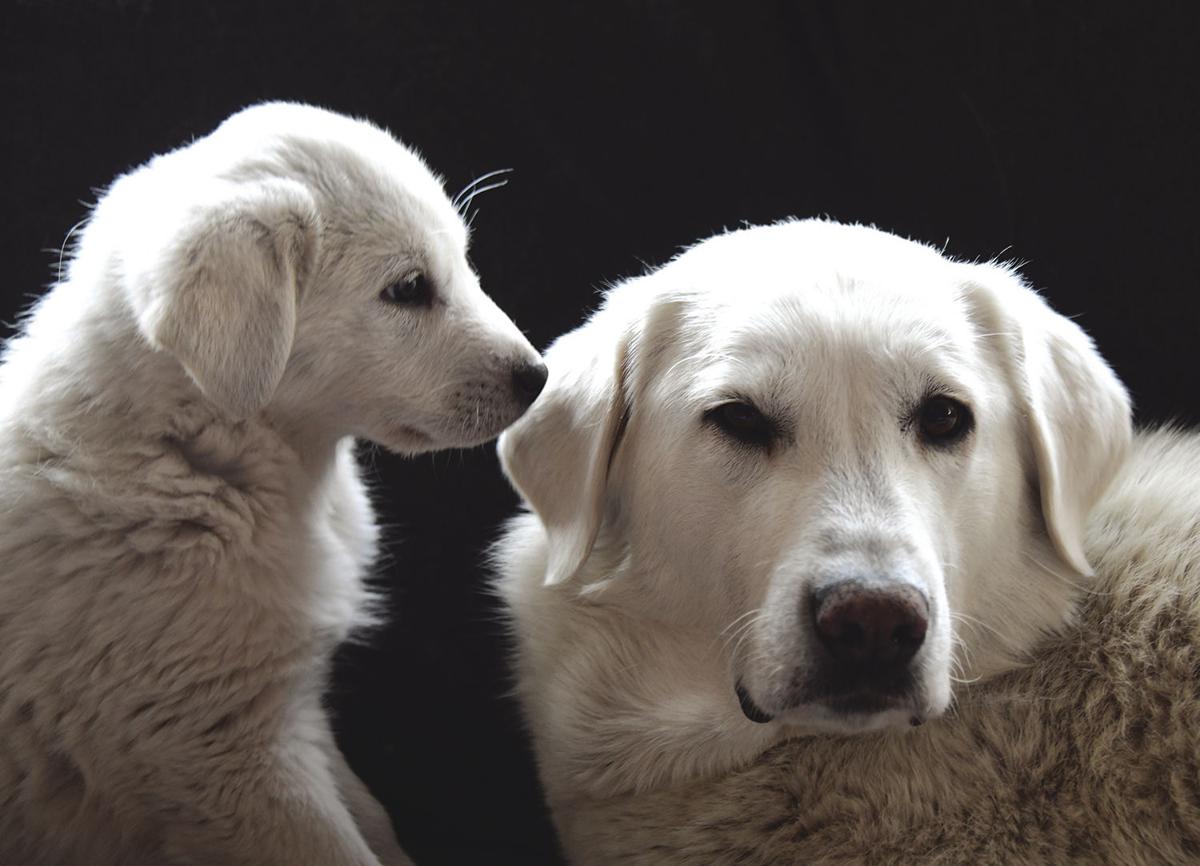 Eve, an Akbash mountain dog, and her puppies are now healthy and content after being rescued from the snow near Croy Canyon on Christmas. 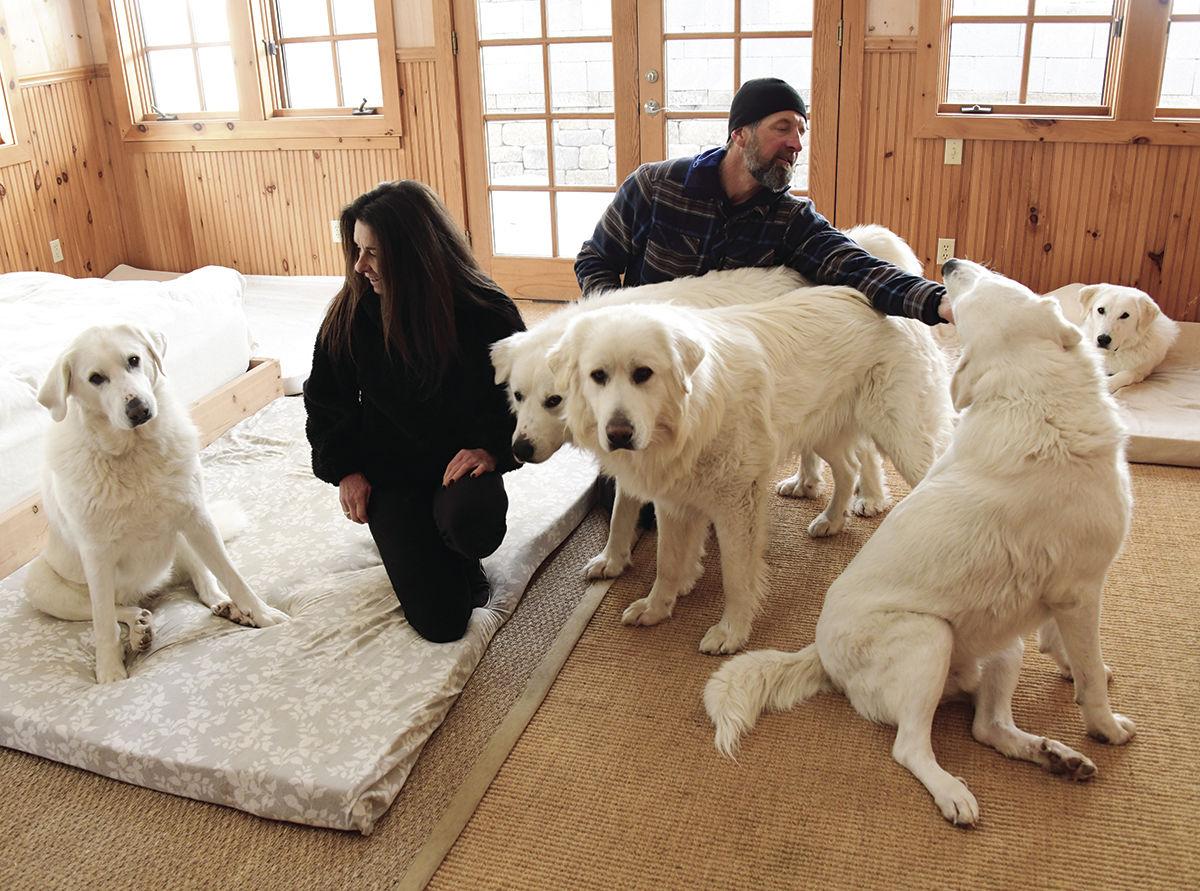 Gary Tickner and Tiffany Larson assembled their rescue dogs at their home in Ketchum in an attempt to get them to look at the camera.

On Christmas Eve, Gary Tickner trudged through knee-deep snow near Carbonate Mountain west of Hailey with three great Pyrenees and two Akbash mountain dogs at his side.

As Tickner scanned the foothills, he was occupied by one prevailing thought: an emaciated Akbash mountain dog, long separated from her herd of sheep and left to freeze. The evening marked day five of the search—sparked by a report from the Blaine County Sheriff’s Office—and Tickner’s hope was quickly fading. A snowstorm had just hit the Wood River Valley, erasing any fresh prints.

“I was out there with the dogs, searching for five days, morning and night, sometimes to midnight,” he recalled. “With low visibility, you couldn’t tell what was what.”

Then came a small lead. Tickner located a string of pawprints going up the mountain, but that dead-ended. The following day, friend Cory Peavey and his father took out a snowmobile to the track site; a call soon ensued.

“[Peavey] went, ‘I have four puppies and a mom,” Tickner said. “He was able to get the puppies onto the snowmobile, but the mother took off. One of the puppies—the runt, we think—bit Corey right through the lip, actually.”

Without the puppies’ mother secured, Tickner couldn’t sleep. So he headed back out to Kelly Gulch, west of Hailey. Three and a half hours later, he’d wrangled Eve—as she was later named—into his truck using dog treats.

As it turns out, Eve had become pregnant, prompting her to leave her assigned herd of sheep and dig a protective den on the mountainside to birth five puppies. As evidenced by a wing print near one puppy’s carcass, it had been partially devoured by a golden eagle, Tickner said.

But rescuing five dogs was still an accomplishment for Tickner, who with his partner Tiffany Larson checked the canine family into Mountain Humane that night for temporary sheltering.

“A Christmas miracle has happened,” Larson wrote on Instagram the next day.

Weighing up to 120 pounds, Akbash and Pyrenees dogs—bred to keep sheep safe from wolves and other predators—are, if working as intended, viewed as livestock in the state of Idaho.

Since 2015, Tickner and Larson have been rescuing, rehabilitating and socializing Pyrenees and Akbash dogs separated from local sheep herds or deemed ill-equipped for the workload. Five Pyrenees and Akbash members have been added to the family in that time, too, each with his or her own story: Kellee and Boone were both left behind by a band of sheep, Kellee near death with parvovirus. Boone had repeatedly wandered from his herd. Olaf and Josey were both relinquished by owners. And Spencer’s collar had grown so embedded into his neck that he needed surgery to remove it. (He was too skittish for sheepherders to catch him, the couple said.)

Paying a visit to Tickner and Larson’s home in Ketchum, one would not suspect the origins of their dogs. In the afternoon, Olaf lies comfortably on a plush dog bed, gnawing contently at a bone. Boone will paw at Tickner’s leg, demanding more belly rubs.

These days, Eve and her puppies spend most of their time nuzzled into the couch or romping around outside.

“It’s amazing how far the dogs have come, how joyful and trusting they’ve become,” Larson said. “At first, we were predators to them. They were scared to death of us.”

Both Larson and Tickner, who own The Mill training center in Sun Valley, have backgrounds in health and fitness.

“I thought owning our own studio would be the end-all, be-all, but when we got Kellee and Boone and had our eyes opened to the conditions [Pyrenees and Akbash] are sometimes subjected to, that all changed,” Larson said.

Tickner and Larson said the working dogs are often mistreated and underfed.

“When you’re hiking near old livestock corrals in the backcountry and come across a Pyrenees dog shot in the head, still wearing his collar, you can’t just be a bystander,” Larson said. “The truth is, if some of these dogs don’t perform well, they are shot.”

At first, productive conversations with ranchers seemed unlikely. But in the last five years, Tickner and Larson said, they’ve formed strong relationships with sheep companies across south-central Idaho—helped along, in part, by offering medical care to the dogs.

“When we’re not taking care of our own pack, we’re out in the corrals feeding, vaccinating, shearing dogs from different sheep companies,” Larson said.

One Pyrenees that Larson approached in the summer was visibly limping and whimpering from a severely matted coat. After shaving and detangling his fur, Larson revisited the dog weeks later while it was out working with sheep.

“He walked towards me, head and tail held high,” she said. “He was a new dog.”

Today, Tickner and Larson hope to open the first strictly Pyrenees and Akbash rescue center in Idaho—the Unega Mountain Dog Rescue. (“Unega” is Cherokee for “white wolf.”) They have their eye on a 170-acre property in Carey, Larson said. The nearest center is in Montana.

The idea is to give dozens of mountain dogs a second chance to grow old, with adequate space to roam and grow.

A link to the Unega Mountain Dog Rescue fundraiser can be found at gofundme.com/f/unega-mountain-dog-rescue/share.

“It’s amazing how far the dogs have come.”

If the dogs are allowed to become feral, which makes sense, how are they fed? And as others have mentioned, vaccinated and cared for (i.e. matted coats and limping). These dogs are the best natural protection against wolves, but there must be a way to care for them.

Certainly the sheep owner/ranchers should take the lead on this---they own the dogs and are responsible for their humane treatment---they should be held accountable.

The people doing this rescue are true angels on this crazy Earth, but why should they do all this while this evil industry gets away with these terrible practices? No vaccinations?? Also, the poor sheep spread invasive weeds and somehow that is overlooked. We have rescued two herd protection dogs from the backcountry. One starving and one young Akbash that was smart enough to quit and run far far away. He was about 6 months old and had a collar that had USSES on it (United States Sheep Experimentation Station) where apparently our University of Idaho scholars are trying to figure out how herd protection dogs can be left alone for months on end to save the industry the cost of human involvement. Wow - thanks U of I...we can guess who funds this “research”. People, we can see here first hand the abuse, neglect and ultimately the murder of these amazing animals if they don’t “perform”. Outrageous cruelty disguised as an accepted business practice - nauseating. If these owners treat the dogs this way, how do you suppose they treat the sheep? Time to stop factory farming in all its forms. Factory farming is three times the cause of global warming than from fossil fuel combustion. Time to go vegan people...the future requires we take a long look at our ethics, and massive change is required. The UN says life on Earth will not endure unless 90% of us give up meat. Make a commitment to the Earth in 2020 and go vegan!

Well said , But I am not going vegan. These horrible sheep ranchers do need to be held accountable !