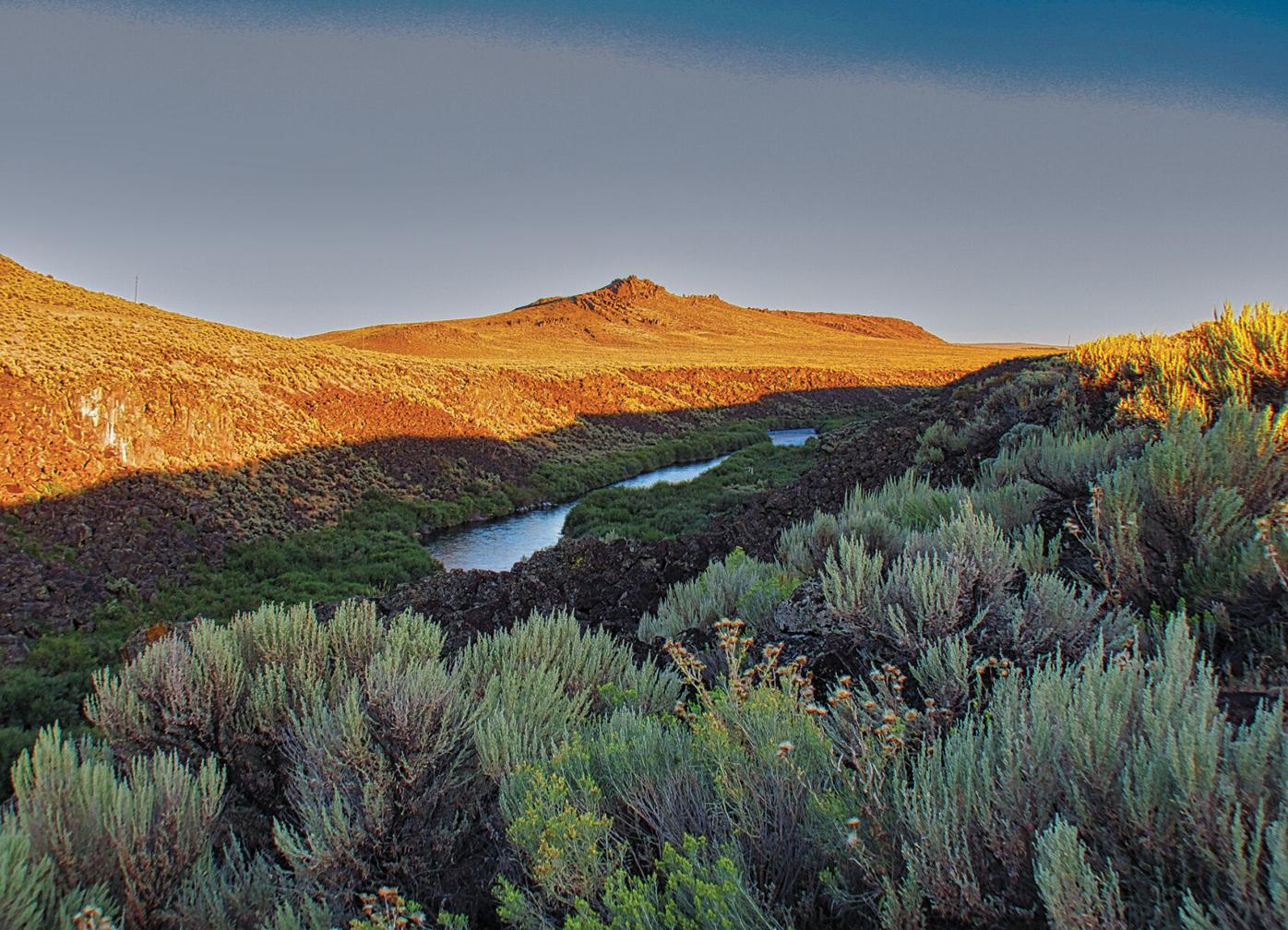 This landscape near Magic Reservoir is within the 1.7 million acres under supervision by the BLM Shoshone Field Office. The area shown is not where the archaeological site described in this 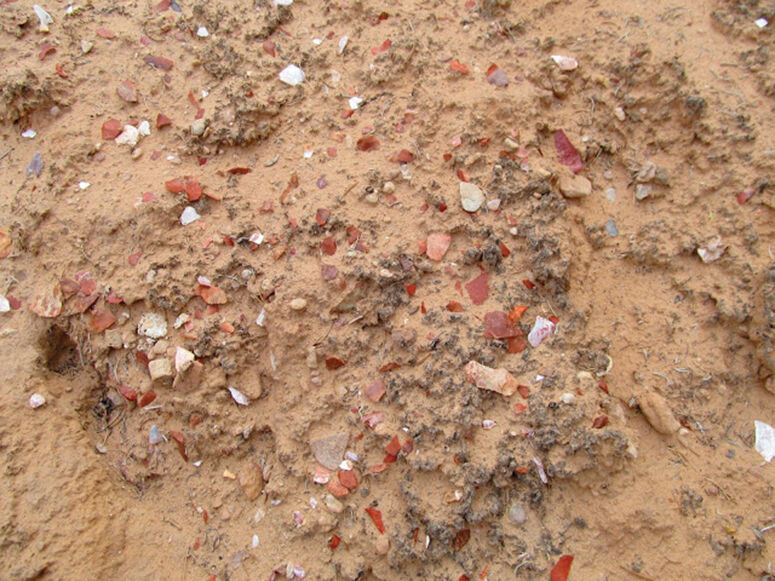 A “lithic scatter” from an unidentified location, courtesy of the BLM Shoshone Field Office. 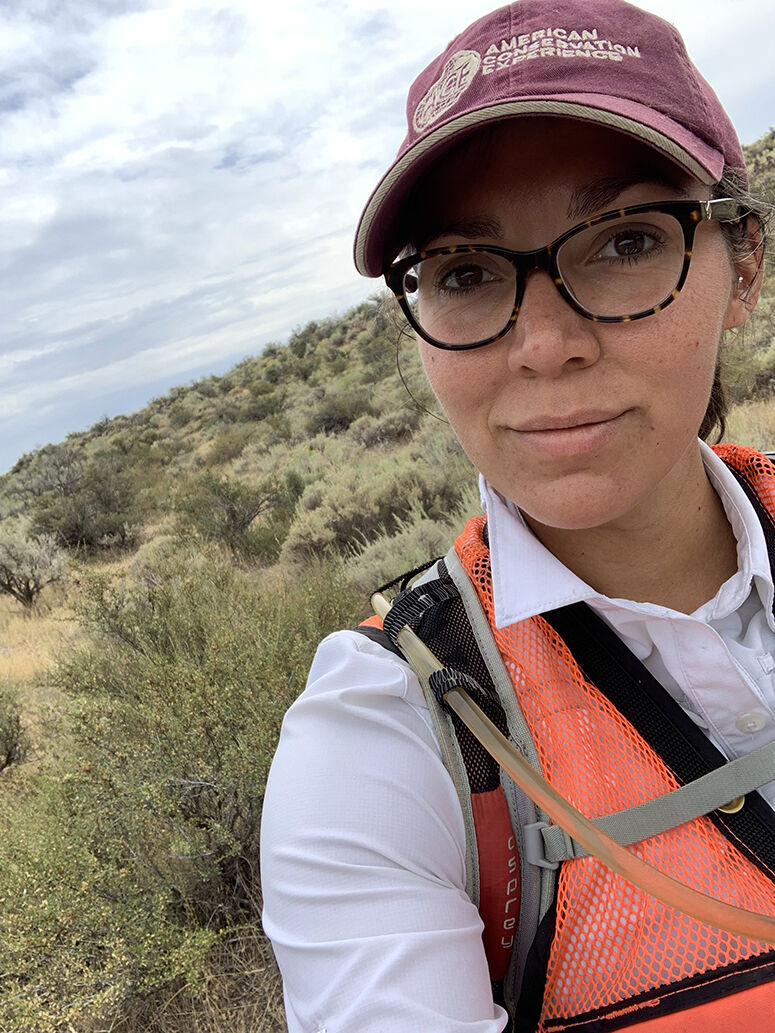 Ashley Long works for the BLM as a field archaeologist. Part of her job is informing the public about laws protecting cultural and historic sites on public lands.

While on a recent hike in southern Idaho not far from the Wood River Valley, I stumbled upon a scientific discovery, a missing piece of the archaeological record that is also considered sacred to local Native Americans.

On a dry piece of ground atop a butte in a trackless area of thick sagebrush, I paused and looked down to see a scattering of small shards of stone that appeared to have been hand-flaked at some point in the distant past. I picked up a few of the artifacts and put them in my pocket, intent on finding out when they were made, and by whom. Because the remote area I was hiking across was Bureau of Land Management land, I contacted BLM Shoshone Field Office archaeologist Ashley Long, who came by to see what I had found.

“I really appreciated that a member of the public had potentially stumbled across an archaeological site and instead off looting the site or damaging the site or even just going about their way, contacted me,” Long said.

Through Long, I learned that the stone flakes were surely man-made and anywhere from several hundred to several thousand years old.

I also learned that taking artifacts from this “lithic scatter” was a big no-no.

Any person who knowingly violates, or counsels, procures, solicits or employs any other person to violate any part of the law can be fined up to $10,000 or imprisoned up to one year, or both. The shards I discovered have since been returned to the site.

Two weeks later, I joined Long on an initial survey of the discovery. She mapped the roughly three-acre site using flags and a GPS device and noted plant species, soil compositions and geological formations in the area. The data were compiled and compared with a decades-old confidential BLM database of other known cultural sites in the region.

“I was pretty excited right off the bat,” Long said.

She found through her research that the site was a new discovery. Though it will probably never be excavated—sites rarely are—its location will serve to provide a broader understanding of the historical record. The BLM will also know to avoid damaging the site during future developments, firefighting or other activity risking disturbance.

“I now know there is a resource there to be aware of,” Long said. “It was crucial information.”

Long oversees archaeological resources and assessments on 1.7 million acres of public land in the Shoshone Field Office, including portions of Craters of the Moon National Monument. She said the numerous known sites in her database are not generally disclosed to the public, as per federal law, to protect them from destruction.

Due to the vastness of public lands, she said that there could still be thousands of undiscovered sites out there.

Most of her work takes place under Section 106 of the National Historic Preservation Act, which requires federal agencies like the BLM to take into account the effects of their undertakings on historic properties.

“Any time there is a federal project on public lands that has the potential to affect cultural resources, there must be an evaluation and an assessment of those effects,” Long said. “From a scientific perspective it is just difficult to study and learn from a site that has been disturbed. We are tasked with preserving these resources, but I don’t want anyone to think we are discouraging anyone from visiting these places.”

If an assessment indicates that there could be impacts on an archaeological site, the BLM works with the State Preservation Office and local Indian tribes to study how to avoid those impacts.

Long’s academic work has taken her to Nevada and Peru. Using “collaborative archaeology” methods, she has worked with tribes to form archaeological projects and analyses that prioritize the goals of indigenous communities, rather than focusing entirely on the goals of academic institutions.

Long said she typically communicates with the Shoshone-Bannock and Shoshone-Paiute tribes about newly discovered sites in this area because it would exist in their traditional territory.

“Indigenous sites are sacred to tribes living in the area, so there is a level of respect that is required,” she said.

Leo Arriwite is a resident of the Fort Hall Reservation and a member of the Agai’Dika-Shoshone (Salmon-eater) of the Mixed Band. He has been instrumental in bringing native cultural events to the Wood River Valley in recent years. Arriwite said that if any cultural artifacts are found, they should be left in place.

“They are a footprint of our past, and sometimes someone today steps in the same footprint,” Arriwite said. “But there may be a good reason something was discarded. If there are rocky places nearby, there could be burials in that area.”

Arriwite said sites on high ridges where many shards of stone can be found are often mistaken for “tool-making sites” by archaeologists.

If near a water source down below, then the site was probably a lookout, according to Arriwite.

“These are places where people who did not go on hunts or on war parties would spend time looking out for the nearby camp or village,” he said. “Making points gave them something to do.”

Arriwite said very small points made at these sites were likely not used for hunting, but instead were used as a kind of currency, or as offerings for animals killed in a hunt.

“The smaller they were and the more perfectly they were made, the more valuable they were,” he said.

Long said anyone who is interested in learning about specific sites or wants to know if they have found something significant should call the BLM.

“Part of my job is about informing the public,” she said.

“They are a footprint of our past, and sometimes someone today steps in the same footprint.”

Leo Arriwite, Resident of the Fort Hall Reservation and a member of the Agai’Dika-Shoshone (Salmon-eater) of the Mixed Band

Cultural sites are sacred to indigenous peoples and integral to American history. By treading softly and leaving things as we find them, we show respect for those who came before us and those who will visit after us. What can the public do to protect ancient and sacred places?

Artifacts are sacred to modern indigenous peoples, and scientists can learn valuable lessons about the past when objects stay where they are. It is illegal to remove any artifact, including historic trash, from public lands.

Natural oils on our hands can damage these delicate images. Vandalism of petroglyphs and pictographs erases stories of ancient people and destroys the experience for future visitors.

Archaeological sites aren’t playgrounds, the BLM stresses. Teach children to respect these places and keep a close eye on them so they don’t get hurt or accidently damage cultural resources.

Camp and eat away from archaeology

Camping, fires and food can damage archaeological features, as well as spoil the view and experience for other visitors. Remember to always pack out your waste, including food scraps.

GPS reveals too much

GPS points often lead uneducated visitors to sensitive sites. If you are interested in posting online about your trips, remove references to specific locations and GPS points from photos.

Leave historic artifacts right where they are, even things like rusted cans. What looks like trash can also help interpret the past by showing who has been there before.

It's really great we have resources like Ms. Long! Fascinating the treasures from the past.