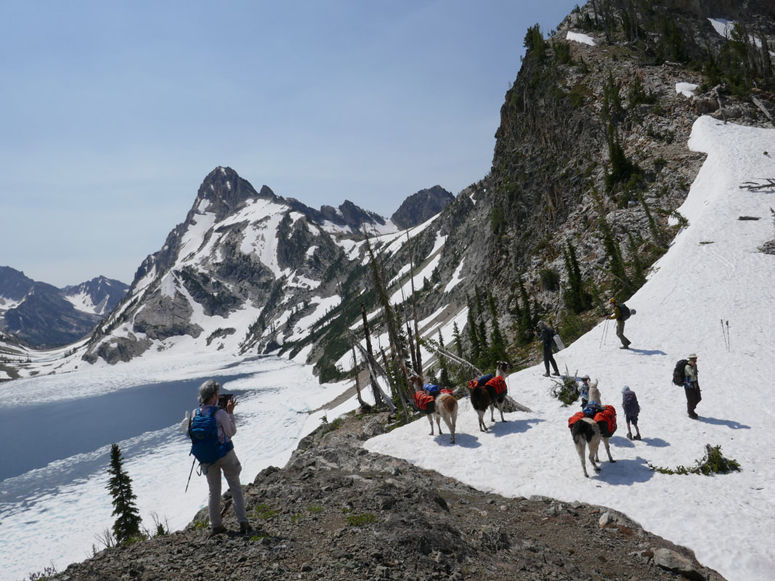 Several friends joined Bob Jonas and Sarah Michael for the portion of their trip to Stanley Lake. The lake was still partly frozen in late July. 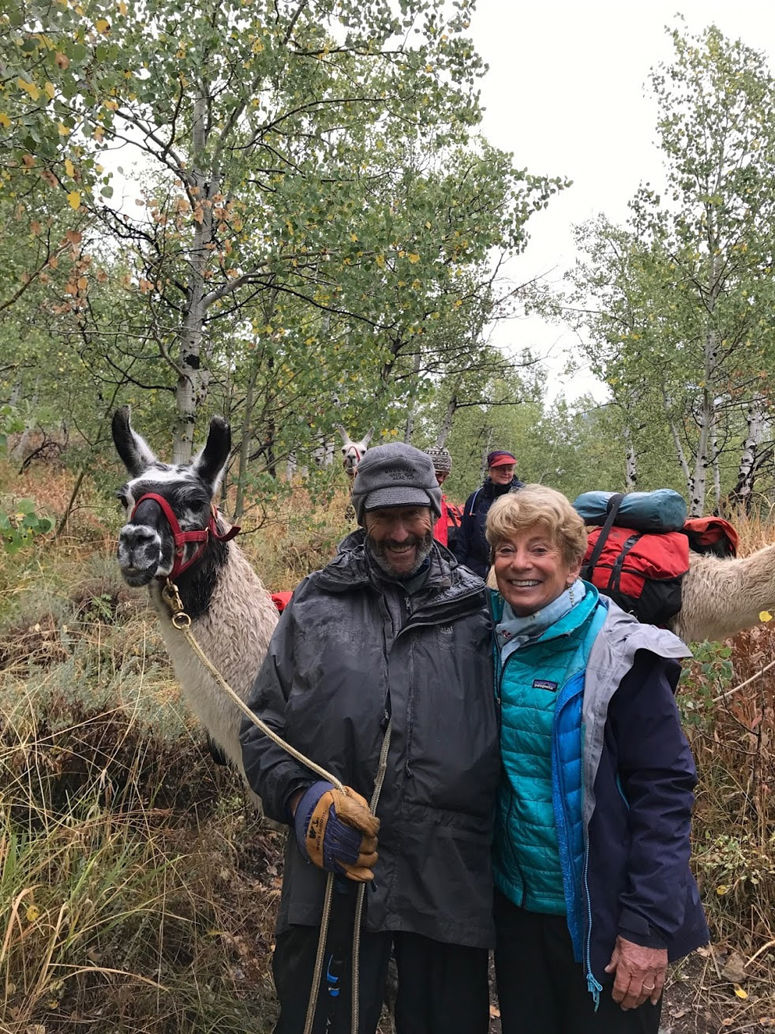 Bob Jonas, left, exits the Pioneer Mountains from Pioneer Cabin on Sept. 22 after a 75-day llama-assisted trek. His wife and hiking partner, Sarah Michael, met him at the trailhead after leaving the trip early due to an injury. 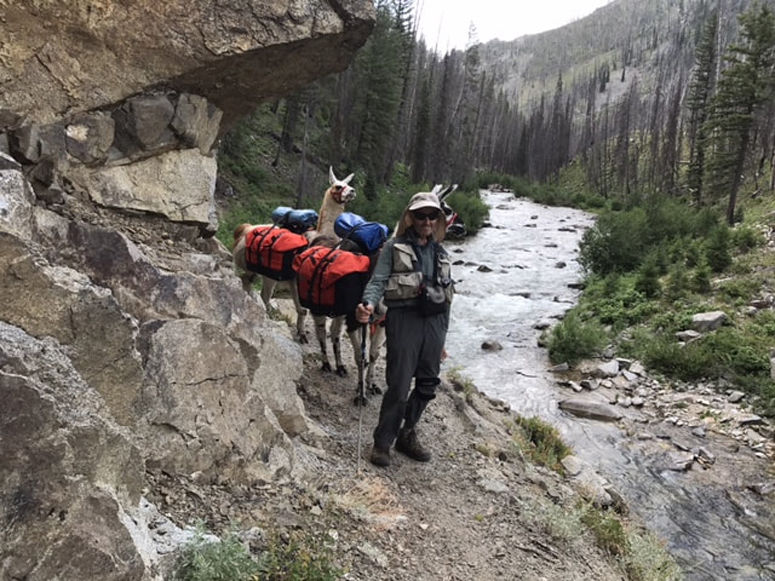 Sarah Michael leads two llamas over Cramer Pass in the Sawtooth Mountains when she and Bob Jonas returned after being forced out of the range due to deep snow in late July. 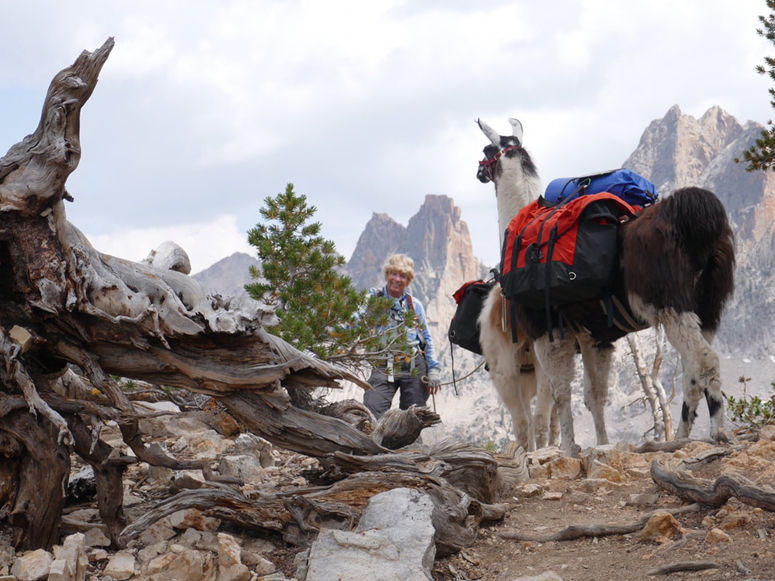 Bob Jonas leads a baggage-laden llama along the Middle Fork of the Salmon River in early August.

Several friends joined Bob Jonas and Sarah Michael for the portion of their trip to Stanley Lake. The lake was still partly frozen in late July.

Bob Jonas, left, exits the Pioneer Mountains from Pioneer Cabin on Sept. 22 after a 75-day llama-assisted trek. His wife and hiking partner, Sarah Michael, met him at the trailhead after leaving the trip early due to an injury.

Sarah Michael leads two llamas over Cramer Pass in the Sawtooth Mountains when she and Bob Jonas returned after being forced out of the range due to deep snow in late July.

Bob Jonas leads a baggage-laden llama along the Middle Fork of the Salmon River in early August.

On Sept. 15, Ketchum residents Bob Jonas and Sarah Michael reached a long-planned goal of more or less circumnavigating the Wood River and Sawtooth valleys and the Middle Fork of the Salmon drainage via wilderness trails.

The 450-mile, 75-day trip also raised more than $12,000 for the 2018 class of Wild Gift, a nonprofit organization started by Jonas 15 years ago to provide seed grants, technical assistance and a 20-day expedition into the Idaho wilderness for budding social entrepreneurs. The money was raised through “wild miles” pledges made by donors for each mile traveled.

The long hike for the couple—Jonas is 75 and Michael is 71—was enabled by the use of llamas to carry most of their gear.

“That gave us a 10- to 12-day range before we resupplied,” Jonas said. “That made the long loop possible.”

Even so, the trip turned out to be harder than they had expected, due to an unusually deep snowpack, hot weather, wildfires and lots of downed timber.

The two said they had underestimated the backlog of trail maintenance on their route, especially in the Frank Church-River of No Return Wilderness, as well as the degree to which deadfall poses an obstacle to llamas.

“We’re in the monkey family,” Jonas said about human travelers. “Four-leggeds are not. Until you’re confronted with that sort of thing, you’re not concerned with deadfall on the trails. It was like Pick Up Sticks with the deadfall.”

Of the two-and-a-half-month trip, Michael said, only two weeks were free from frequent log cutting, which had to be done with handsaws in the wilderness areas.

They didn’t do the whole trip alone—numerous friends accompanied them for sections of the route.

The trip began July 5 west of Hailey in Croy Creek Canyon. The couple headed west into the Soldier Mountains, then north through the Smoky Mountains via Dollarhide Summit, west of Ketchum, to the southern end of the Sawtooth Mountains.

However, there was too much snow and the creeks were still too high in the Sawtooths to follow their intended route, so the couple postponed trekking through most of the range and got a ride from Pettit Lake to Stanley Lake. There, they re-entered the wilderness and walked up to Sawtooth Lake, which was still partly frozen and covered with snow in late July, Jonas said. They came out of the Sawtooths on state Highway 20 at Marsh Creek, west of Stanley. That enabled them to begin walking down the Middle Fork of the Salmon River. They made it to Elkhorn Creek, about a third of the way down the river, before their progress was stopped by a wildfire that had broken out to the northwest near Yellow Pine. They had to backtrack up the river to the highway, where friend Andy Munter gave them a ride to the headwaters of Big Creek, a major tributary on the west side of the Middle Fork north of the fire area.

Jonas said they saw little wildlife on the trip, except along Big Creek, where they saw four bears and lots of bear scat. The couple said the llamas always saw the bears before they did.

From there, they had planned to go up the Middle Fork, but by then lightning had ignited the Ibex Fire just east of Loon Creek on the east side of the Middle Fork, again blocking their route.

So, the couple headed up Waterfall Creek into the Bighorn Crags area on the east side of the Middle Fork. There, they walked through an area they named the “Valley of the Standing Dead,” due to the several miles of trees killed by fire and beetles. They came out to the East Fork of the Salmon River on state Highway 75 downstream of Stanley, and spent a few days in Ketchum and a few days at their friend Heather Mack’s ranch along the upper East Fork to watch the solar eclipse on Aug. 21. They returned to the Sawtooths to finish the part of their route they had skipped over the high country between Pettit and Redfish lakes.

Then it was back to the East Fork and into the White Cloud Mountains at Livingston Mill, up Big Boulder Creek and then south through the center of the recently created White Clouds Wilderness Area.

“The most emotional part of the trip was walking up Big Boulder Creek and seeing the wilderness sign, and we saw the magnificent peaks, knowing they’re safe and protected forever,” Michael said. “That was a really big deal.”

The couple came back out to the East Fork at Germania Creek at the southeastern end of the range and returned to Mack’s ranch to resupply. By then, Michael was hurting from a minor injury she sustained falling on a rocky section of trail in the White Clouds, and she decided to bail out before Jonas and the llamas headed east into the newly minted Jerry Peak Wilderness. He traversed much of that wilderness area and came down the North Fork of the Big Lost River, taking a small shortcut from the planned route to meet a scheduled rendezvous with a camera crew from public television’s “Outdoor Idaho” show at the top of Summit Creek in the Pioneer Mountains. Michael hiked in for the shoot.

Jonas and the llamas continued south through the Pioneers to Pioneer Cabin. They exited the range at Hyndman Creek in stormy weather on Friday, Sept. 22.

The llamas, which had been suffering through temperatures in the 90s when they began the trip, were shivering and looked like wet mops when they walked out, the couple said.

The animals were rented from a business in Idaho Falls called Wilderness Ridge Trail Llamas. Jonas and Michael took a half-day course from the outfitter on caring for the animals before they headed out, and a trainer accompanied the trip for the first 10 days.

Though the llamas can carry more than 70 pounds each and were essential to the long times between resupplies—10 of which were scheduled—they slowed the pace to 1 to 2 mph due to their need to graze and to have a clear trail. The couple said they averaged about seven miles per day. They had scheduled several layover days along the trail, but had to cancel them all due to changes in their itinerary. The llamas were exchanged for fresh ones four times during the trip.

Jonas said he will return to the Pioneers at the beginning of next week for an additional six days to finish traversing the range down to its foothills near Craters of the Moon National Monument.

“It’s a country to get lost in,” he said of the central Idaho wilderness. “It takes a lot of time and a big chunk of a life to explore every bit of it. There’s only one place else like it in the U.S., and that’s Alaska.

“It’s a hell of a walkabout. It’s something that I’ve been wanting to do—to put all the pieces together in one long trip.”

Trek to be on Idaho PTV show

Sarah Michael’s and Bob Jonas’ trek will be part of a December “Outdoor Idaho” show on Idaho Public Television titled “Into the Pioneers.” The show will include a winter segment at Pioneer Yurt, the Rebecca’s Private Idaho bike race, mining, geology and a look at pronghorns and sheep.