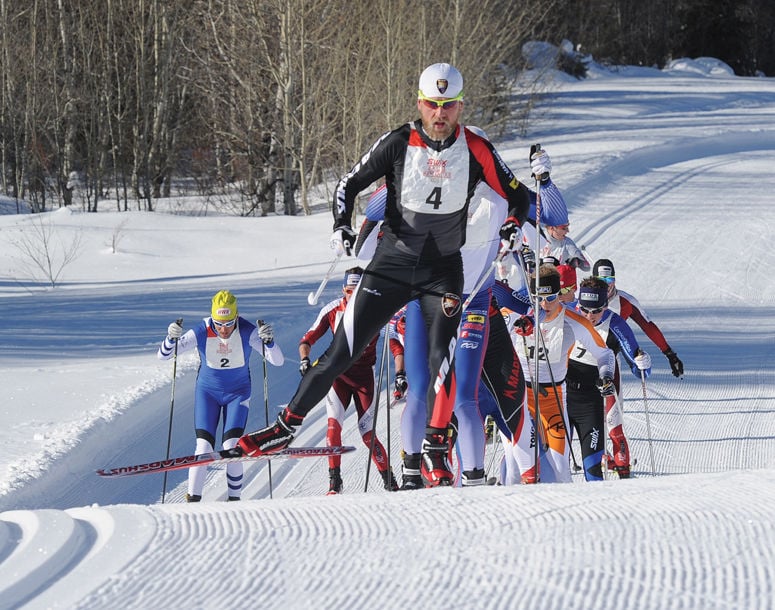 The annual Boulder Mountain Tour, north of Ketchum, had humble beginnings but has become one of the nation’s premier Nordic races. 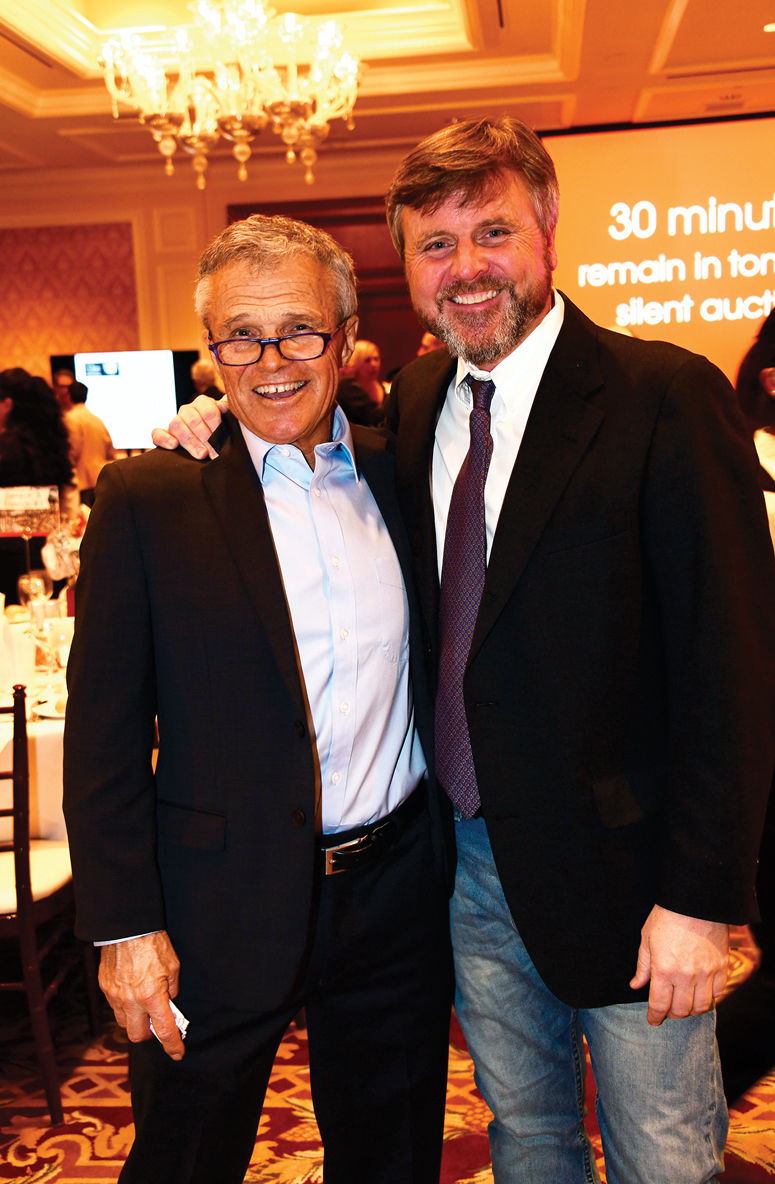 One-hundred-and-fifty years after Scottish trapper Alexander Ross became the first white man to explore the northern reaches of the Wood River Valley, Bob Rosso was skiing the opposite direction, southward down the valley from Galena, on his way to become the first skier to reach the finish line of the second-ever Boulder Mountain Tour. Just as Ross’ pioneering exploration led to greater exploits in the decades to come—namely the 1880s mining boomtown at Galena—so too would Rosso and his peers’ pioneering efforts lead to a world of skiing beyond their imaginations.

This year, three north valley trail systems—Galena’s trails, the Harriman Trail and Billy’s Bridge—swept the 2019 Best of the Valley poll—a testament to the stature of the network that arose from local passion and effort, and that has fostered a culture of recreational and competitive Nordic skiing without equal in the United States.

“The Nordic culture is pretty deeply rooted but also pretty young—you have a very broad range of skiers. You have the very traditional folks and then the up-and-comers, which is pretty spectacular because there’s always somebody to ski with, whether it’s a current Olympian, a future Olympian or a past Olympian,” said Maddie Morgan, a Sun Valley Ski Education Foundation Gold Team athlete. Morgan, who competes in FIS Elite U-23 Nordic events around North America, moved here last summer from her native Park City, Utah, to join the Gold Team, and she praised the area’s trails as being ideal for training.

“There are so many trails. Starting at the bottom of the Harriman, you can ski all the way up to Galena,” she said. “You can connect all of them, which I think is pretty unique.”

It’s not just the amount of Nordic skiing that makes the north valley trails unique—the variety of terrain is key, as is the grooming.

“The variation really has high training benefit. If you’re looking to go out for an easy ski, you can go out and cruise up the Harriman for two hours. It’s very convenient to have that when you’re supposed to take it easy you need easy terrain,” Morgan said. “Because it’s so varied, it’s easy to find steeper sections for intervals. The terrain definitely allows for productive training—it’s very conducive.”

When she visited for training camps and competitions before moving here, she said, “you could always find a trail that was freshly groomed and was groomed the right way,” which she said is rare in other towns. Also rare, she said, is that the trail network here also caters to locals and recreational skiers, not just racers and tourists, and that trails are connected to each other and easily accessible.

“Living here allowed me to really experience everything it has to offer and not just the race course, which is something I think the locals are really fortunate to have,” she said. “It’s accessible to everyone—there’s a fair amount of trails where you can ski with your dog, as well, which is neat. It really meets the needs of the locals, which I think is neat for a ski town because it’s mostly the tourists [that facilities elsewhere cater to].”

Rick Kapala, the director of the SVSEF Cross-Country Program, agreed, and praised the Blaine County Recreation District’s maintenance of the trail system.

“The stewardship by the BCRD has been tremendous and has resulted in this really, really high-quality trail system,” he said. “Led by Eric Rector, they love what they do. The guys are so committed to skiing and really care about delivering the best skiing to pass-holders, and you can tell by the quality of grooming.”

Diverse trails and terrain, skiable from November through May, with the perfect elevation and superb grooming, make the north valley’s trail network the best in the nation, Kapala said. The greatest ski team in the world, the Norwegian Olympic Team, agrees—the team came here to train ahead of the past two Winter Olympics in North America, the 2002 Salt Lake City games and the 2010 Vancouver games, he said.

“That’s, to me, sort of the tell: when Norway chooses to come here for the pre-Olympic test,” he said.

Today, Blaine County offers more than 200 kilometers of Nordic skiing in its world-renowned network of trails, which fosters a thriving community of recreational Nordic skiers, a world-class development program and elite ski team, as well as generations of professional and Olympian Nordic skiers. About 160 kilometers of trail are managed by the BCRD, most of which is on Sawtooth National Forest land in the north valley. But such a wealth of Nordic skiing is a relatively new amenity for the nation’s oldest ski resort town, and its history spans more than a century.

“From my point of view, it’s almost primarily about Bob Rosso,” Backwoods Mountain Sports owner Andy Munter said. Munter had “kind of been a Nordic skier” before moving to the valley in 1977 to work at Snug Mountaineering. He began working at Backwoods in 1980 and became an owner in 1983, “So I’m kind of the new guy compared to Bob,” who opened The Elephant’s Perch in 1976.

In the early ’70s, Rosso and the late Rob Kiesel, the owner of Snug, had the “goofy idea” of a ski race from Galena Lodge to the Sawtooth National Recreation Area headquarters, about 31 kilometers southeast of the lodge on state Highway 75, Munter said. Around that time, Nordic skiing was a fledgling sport in the valley, underpinned by the late Swedish ski legend Leif Odmark’s groundbreaking Nordic center in Sun Valley—the nation’s first. In addition to the Boulder Mountain Tour, which began in 1973, the late ’70s and early ’80s brought more eccentric point-to-point races, including courses running from Galena Summit to Busterback Ranch, from Lake Creek to Elkhorn, and one around city blocks in Ketchum, he said.

“There were all these ideas for these events that made no logical sense, but that passion and imagination kept it going,” Munter said.

“In the very early years, there was no trail, there was no grooming—we just skied and it was a free-for-all. A whole bunch of us got our skis on—you just went ripping along,” Rosso said. “In the beginning, we were just trying to figure out how to get from A to B.”

By the ’80s, the Boulder Mountain Tour course was prepared once yearly for the race, including the construction of temporary log bridges and arduous, rudimentary grooming with snowmobiles.

“When we started that project, it was way before the technology that you see today,” Rosso said. “We used to drag a rake behind a sled—it was pretty grim.” He said that snowmobiles may have ended up in the river more than once.

In 1971, Kiesel founded the SVSEF’s Cross-Country Program. A groomed trail running the length of the north valley was an enticing prospect for racers and enthusiasts alike, according to Kapala, who has now been at the helm of the team for more than three decades.

“In the late ’70s and early ’80s, all kinds of top skiers were coming here to train, and they’re all still here,” Munter said. “They stayed here for the quality of life but they came here for the Nordic skiing.”

As fundraisers built the valley’s trails to the expansive and varied network enjoyed today, the trails themselves fostered a vibrant and diverse community of Nordic skiers including local enthusiasts, tourists and part-time residents, and some of the fastest competitors on earth. It’s something that the pioneers of today’s Nordic trail network gaze upon with pride.

“They’ve developed that incredible system out there for the kids and racing, and now you look at the fruit of that: They’ve got kids getting scholarships, you’ve got kids getting on the U.S. Ski Team, and it’s all because of that network,” Rosso said. “The racing is a big part of it; it helps share the enthusiasm of it—it’s not like it dominates it.”

“In the late ’70s and early ’80s, all kinds of top skiers were coming here to train, and they’re all still here.”

All respect and praise to the early arrivers, who created and built so much for all of us. Fingers crossed a new generation of people with the same spirit and determination will preserve and grow the gifts bestowed.