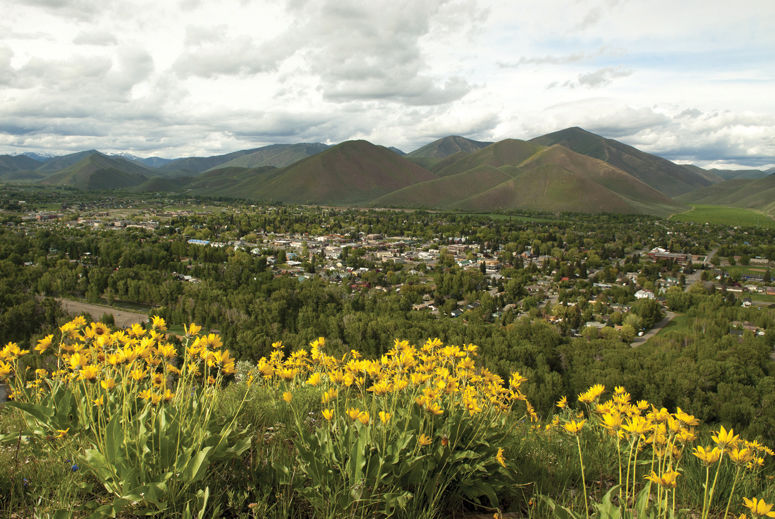 In the heart of the Wood River Valley, Hailey has become known for its small-town charm and friendly people.

Ryan Gelskey’s family has been in Hailey since the 1800s. He recently moved back to town from Seattle.

Larae Zimmerman, left, and Manay Whitcomb rode their bikes to a downtown Hailey café after catching fish in the Hiawatha Canal.

Hailey resident and artist Tom Teitge designed the logo for the city of Hailey.

The city of Hailey may have hit its sweet spot. It’s thriving, but it’s not too touristy. Historic, yet still wild. Community-centered, yet close enough to Sun Valley to have a cosmopolitan perspective. No wonder Idaho Mountain Express readers voted it the best town in the valley to live in.

“Its been an amazing place to raise a family,” said Hailey resident and artist Tom Teitge, who moved to town in 1980.

“I came here when it was so unpopulated that you could fall asleep in the middle of Main Street and people would drive around you,” Teitge joked. “It’s still a safe place, only five minutes from the wilderness. What could be better?”

Though the population has more than doubled since 1990, to about 8,285, the biggest town in the Wood River Valley retains its rich architectural history, boasts a wide variety of dining and shopping experiences (from simple to fancy) and has a diversity of neighborhoods—all within a short bike ride or hike to the surrounding natural beauty of mountains and streams.

But ask a local and you may find the real reason they live in Hailey is the people.

“There is a deep sense of community and a sense of belonging here,” said Ryan Gelskey, 27, a great-great-grandson of famed Hailey journalist Roberta McKercher.

Gelskey recently returned to live and work in Hailey after studying and working for 10 years in Seattle and abroad.

“Seattle had plenty of opportunities and was a liberal place, but I got burned out on the city and realized that I didn’t want to live in suburbia, or downtown, where I was always looking at glass and concrete,” he said.

Gelskey, who now works as a librarian in Ketchum, said he enjoys being back in the small and rustic town where he grew up.

“Hailey is where you can see elk and deer in the yard after the first dusting of snow in the fall,” he said.  “And I just love the fact that chokecherries grow wild in the alley behind our McDonald’s.”

From working-class Woodside subdivision with its newly rebuilt boulevard to upscale Northridge, and the up-and-coming Old Cutters communities east of downtown, Hailey has a neighborhood to suit almost any budget or taste.

While Sun Valley Resort draws tourists from around the world, Old Hailey is perhaps the best-kept secret in the Wood River Valley. Visitors who land at Friedman Memorial Airport in route to Ketchum and Sun Valley often pass it by.

Located east of Main Street and centered behind the iconic Liberty Theatre are Old Hailey’s quiet tree-lined streets, historic homes, churches and a Masonic hall that evoke an earlier era. The Nature Conservancy and Wood River Land Trust are tucked into this residential neighborhood that runs the length of the original townsite under towering cottonwood trees, spruces, willows and fruit trees.

“Hailey has done a good job of holding onto its history, and as a result Old Hailey has the charm and historic character that a lot of people are seeking,” said Community Development Director Lisa Horowitz. “And our design-review guidelines make sure that this history is preserved.”

In spring 2019, city staff were in the process of installing 15 new plaques that would identify Hailey’s historic buildings, including the Emmanuel Episcopal Church, U.S. Forest Service buildings, the Ezra Pound house, the Inchausti Home and St. Charles Borromeo Catholic Church.

Yet, Hailey is also a forward-looking community. Even as the city works piecemeal to upgrade or replace its 100-year-old sidewalks, the process of developing new bike and pedestrian infrastructure is showing quick results. A Pathways for People property-tax levy passed three years ago is yielding new connections to downtown from the Wood River Trail and safer nonmotorized access through Old Hailey on Second Avenue.

Those paths are used by many kids who live around town. Hailey is home to most of the schools in Blaine County, as well as many of its teachers and students. This gives the city a diverse demographic profile and family-oriented feel.

Manay Whitcomb and Larae Zimmerman, both 11, rode their bikes together to a downtown Hailey café after catching fish in the Hiawatha Canal east of downtown. Both girls said they enjoy their public-school classes in which they are encouraged to think creatively and engage with the community.

“This is a peaceful town that has everything we need,” Whitcomb said. “And all of our teachers are amazing.”

“I am in love with science,” said Zimmerman. “We get outside and see the beauty of science and how we can use it in our everyday lives.”

The girls said their teachers have them spend time working with nonprofit organizations such as The Hunger Coalition.

“Our education is interconnected with our community,” Zimmerman said.

The city has 14 neighborhood and community parks, which comprise 60 acres. Hailey has a world-class skatepark, a rodeo arena to host its renowned annual Sawtooth Rangers Fourth of July Rodeo and a new ice rink that draws thousands for hockey tournaments each year.

A growing trail system for Nordic skiing and mountain biking includes the recently developed 4.2-mile perimeter loop trail in Quigley Canyon, made possible through the city’s annexation negotiation with the developers of Quigley Farm residential community. The deal preserved 1,161 acres of open land and wildlife corridors in Quigley Canyon under a conservation easement.

Similarly, the recent Colorado Gulch Preserve annexation will bring more homes but has also resulted in the preservation of more than 150 acres of riparian areas and trails that now connect to the Wood River Land Trust’s Draper Preserve to create the Hailey Greenway, a 1.5-mile public access along the Big Wood River.

“Nowhere in Ketchum can you walk that far along the river in a shaded corridor,” Horowitz said.

Though it has its share of second-home owners, Hailey is predominantly a residential town for local working people. Blaine County, the city of Hailey and the Blaine County School District provide many jobs. Power Engineers is a major local employer, with branch offices around the world. A vibrant business community with many restaurants, shops, craftspeople and entrepreneurs adds to the mix.

Hailey Mayor Fritz Haemmerle said the city government focuses on a “teamwork philosophy,” generally hiring people who have a history of working and contributing within the community.

“This way, our employees always have a stake in the city’s success,” he said.

Haemmerle attributes a lot of the city’s recent success to citizens who have “stepped up to the plate” and approved recent infrastructure projects, including wastewater facilities, holiday lighting and bike and pedestrian paths.

“This shows that our people are willing to invest in the success of the city of Hailey,” he said.

Haemmerle said Hailey is a town that celebrates and welcomes people of diverse backgrounds.

Perhaps due to its growing popularity, finding an affordable place to live in Hailey has become more challenging. City staff and elected officials are working to bring about solutions, including overlay districts designed to incentivize development of inexpensive apartments.

“We hope that this will allow for less costly housing for young people who wish to remain here, or come to Hailey to live and work,” Haemmerle said.