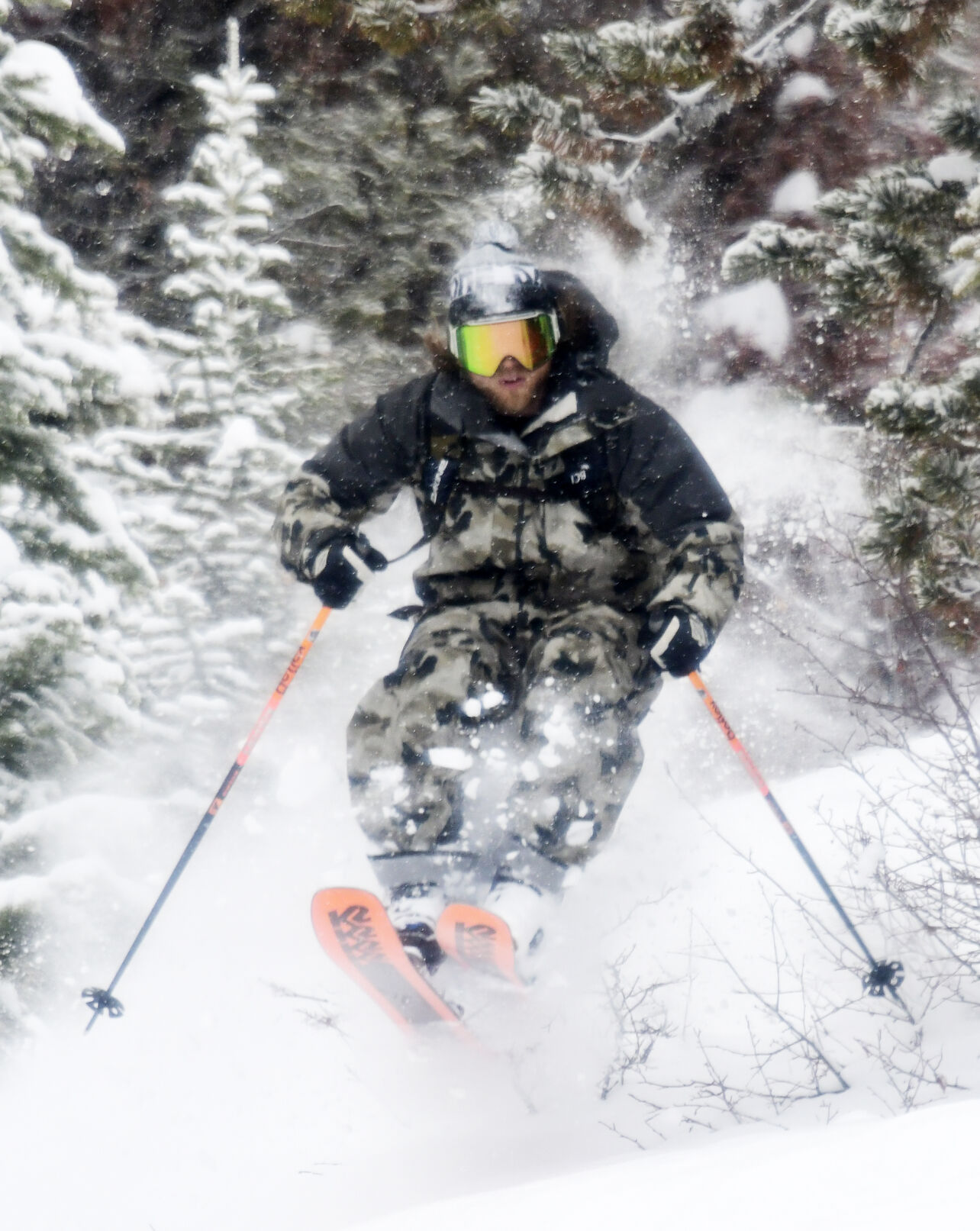 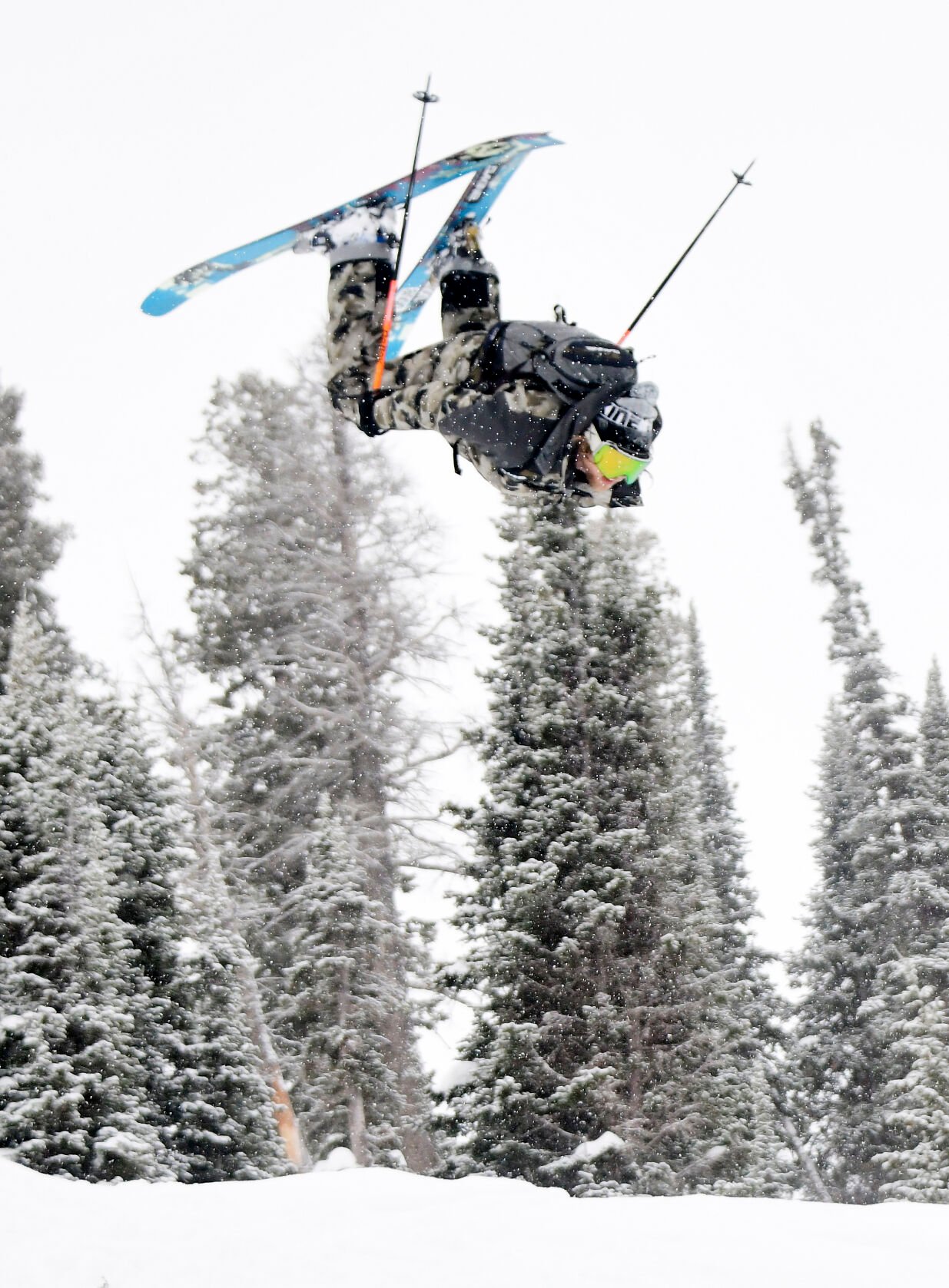 Fostvedt has become well-known for his backflips. Here, Fostvedt does his famous move on Bald Mountain. 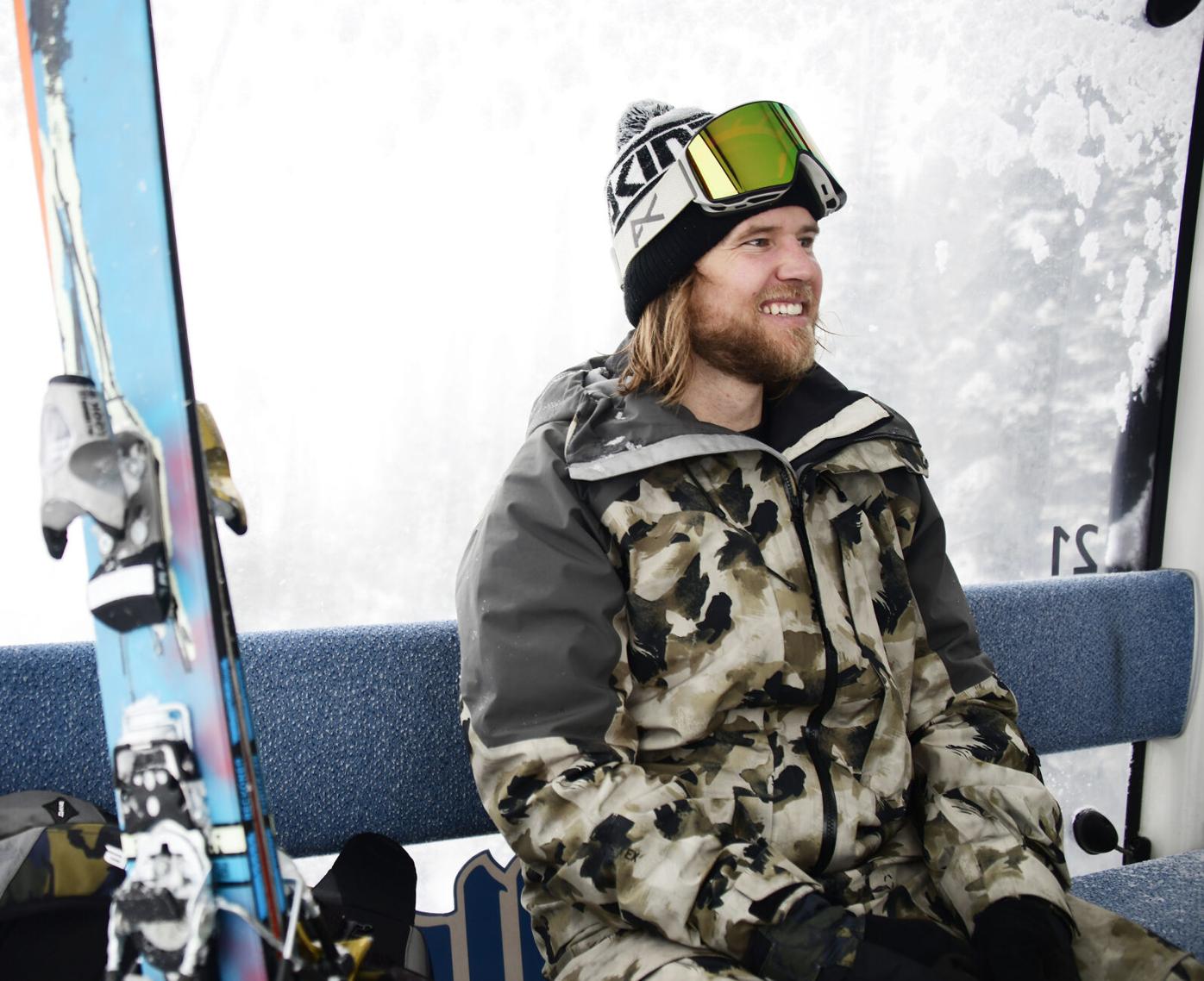 Fostvedt is always smiling when he knows he’s going skiing. 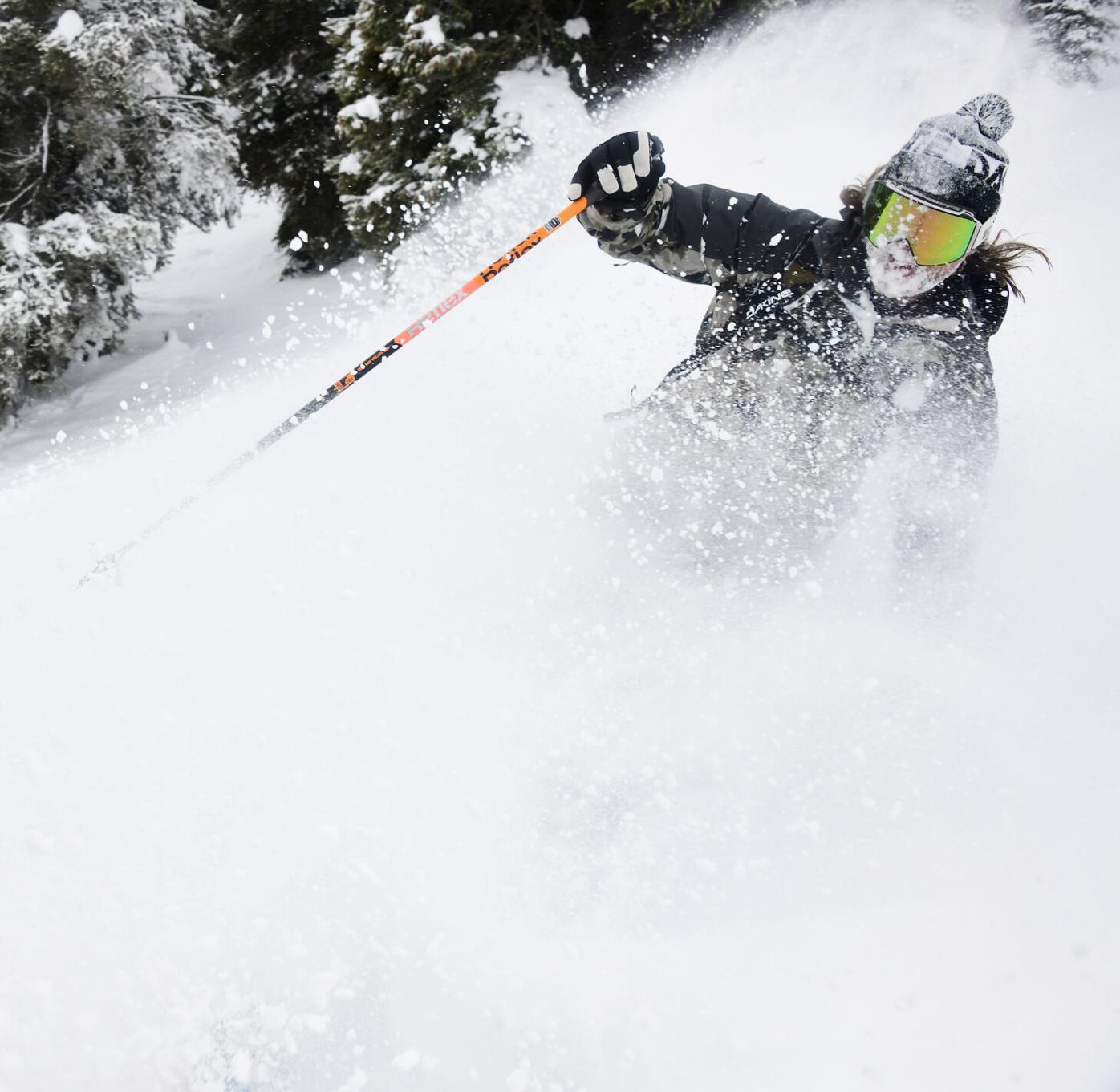 The year 2021 had seen its fair share of bumps and bruises as the world barely hung onto this crazy roller coaster ride that we’ve been calling life. And with that, there’s one person who has conquered hardships and embraced the triumphs, lending us his heart and leading us with his soul.

So, is it any surprise that we’re naming Karl Fostvedt, the King of 2021—homegrown local and fan favorite—Idaho Mountain Express “Athlete of the Year.”

Not necessarily. In our eyes, it was the easiest choice we’ve made all year.

“To get voted by the Idaho Mountain Express ‘Athlete of the Year’ is unbelievable, especially in skiing,” Fostvedt said. “I think of it as half sport, half art. I’m honored and I love this community.”

Fostvedt kicked off 2021 by winning Kings & Queens of Corbet’s at Jackson Hole’s legendary Corbet’s Couloir on Feb. 18, a feat that nearly didn’t happen for him. Then he was voted the Valley’s “Best Athlete” in the Idaho Mountain Express’ “Best of” series, which was voted on by peers and fans. Later in the year, he premiered his first ski film “BrapSki—Volume 1” at The Argyros Performing Arts Center in Ketchum.

Life is a roller coaster

Fostvedt’s year began with an unexpected low. Rewinding to Thanksgiving of 2020, Fostvedt was in Rossland, British Columbia, visiting his cousin, Alex Fosvedt. Alex was diagnosed with brain cancer in May of 2020 and was going through bouts of chemotherapy. When family was needed, Karl was there.

“It was emotionally tough to begin 2021,” Fostvedt said.

Then in January, when COVID-19 was raging, Fostvedt contracted the disease unknowingly, which put him down for the count for approximately three weeks. With the Corbet’s competition right around the corner, Fostvedt wasn’t sure if he would make an appearance.

Fostvedt left quarantine on Feb. 14, and he busted over to Jackson to register on the arrival date, Feb. 15.

Fret not: Fostvedt’s winning run consisted of a switch-cork 900 to begin the drop. He then had a clean run through the final jump, where he spun a colossal 1080 to finish.

“I won the contest, but you can see the roller coaster,” Fostvedt said. “Everything came together. Overall, it was one of the best seasons of my life.”

Winning Corbet’s was an amazing feat. The competition saw 26 male and female skiers and snowboarders perform double backflips, nose butters, huge methods and the first-ever wall ride along the rock face that bounds the iconic couloir.

To top it all off, Alex’s brain cancer is in remission.

Fostvedt, who is 31, is about as local as as a guy can be. He was born in the Moritz Hospital in Sun Valley. He’s the son of local veterinarian Dr. Karsten Fostvedt of St. Francis Pet Clinic in Ketchum and Teri Fostvedt, who currently lives in Salt Lake City and works as a nurse.

Fostvedt rose through the ranks of the Sun Valley Ski Education Foundation mogul team and it was during this time on the SVSEF moguls team that the moniker “Crazy” Karl was born. He was the youngest skier on the team and was doing jumps the older skiers were doing. A few coaches coined the nickname and it stuck.

Fostvedt then spent his freshman and sophomore years of high school at Steamboat Mountain School in Steamboat Springs, Colorado, and that’s when he was exposed to a new world. While in Colorado, he was introduced to a more developed freeride program, and he was smitten. He was drawn to terrain parks and street skiing, often trading alpine slopes for urban features.

Fostvedt came back to Idaho for his junior and senior seasons. At Wood River High School Fostvedt took on another love: filmmaking. He credits multimedia teacher Chet Olson for showing him the way in film, photography and editing. For his high school senior project, he designed a terrain park for Sun Valley Resort.

He eventually rebranded himself and took on big mountain skiing and backcountry adventures. (“I can still slide a rail,” Fostvedt added.)

However, his ability to send it in dangerous atmospheres has allowed him to keep the nickname “Crazy” Karl. To some, the nickname might have negative connotations, but Fostvedt says that’s a misinterpretation.

“The reason why I have that nickname is because of my drive and motivation,” he said.

"It was one of those years that I just put my head down and worked hard. It was stressful, and it all came together. Looking back, it was one of the best years of my life.”

After high school, Fostvedt went off to the University of Utah in Salt Lake City where he met his girlfriend—at a ski movie no less. He’s been with Sierra Kurian for eight years.

While at the university studying architecture, he came to a crossroads with his future: school or skiing.

“I was about to throw in the towel, and I thought that my dream was over,” Fostvedt said. “I knew I wasn’t going to be able to ski and go to architecture school at the same time.”

Poor Boyz Productions changed everything. They saw an online ski edit of Fostvedt, and they asked him to come along for a shoot. He soon switched his major from architecture to environmental science, which allowed him to keep an open ski schedule.

“Things began to snowball after that trip with Poor Boyz,” Fostvedt said, and at 21, he won “Rookie of the Year” at the 2012 International Freeski Film Festival. In 2013, he was nominated for a Powder Magazine Award for Best Manmade Air. The next year, he won the Under Armour War of the Rails at Bear Mountain. And in 2018, he earned a Corbet’s crown, winning the Kings & Queens competition for the first time.

Heavy is the head

From there, the ride didn’t slow down. After a short stint surfing in Mexico with the Gem State Surf Club—a collection of friends who surf as soon as the snow dries up, trading ski boots in for sandals—Fostvedt began putting together his very own production company, Native Earth Productions. This year, Native Earth put out Fostvedt’s first ski movie, “BrapSki—Volume 1.”

Hank Minor—the owner of Apple’s Bar & Grill at the base of Warm Springs—gave Fostvedt his first $500 to start the movie. The money from Minor turned into a Kickstarter campaign of $50,000 and Fostvedt was en route to filming.

The movie, which premiered at The Argyros in Ketchum on Oct. 7, opened to rave reviews and showcased Fostvedt’s filmmaking talents. Transitioning from risk-taking athlete to filmmaker, Fostvedt experienced new fears that he didn’t see coming. He said that presenting a movie to a crowded theater is one of the scarier moments of his life despite making a career of dropping in and doing 360 spins over avalanches.

“I’m getting a little more comfortable this year with the microphone,” Fostvedt said.

“I love this place.”

The crew used drones to capture footage, which was cut into a final 25-minute edit.

“It was such a great opportunity working with local athletes and creating a film with a crew that has a lot of chemistry from skiing together for over 20 years now,” Fostvedt said.

There are plans to make the series into a trilogy before moving on to new projects. “BrapSki—Volume 2” is currently to be determined.

“I think I put too much pressure on myself,” Fostvedt said. “But I’m happy I did, because now it’ll be easier for us to put out a movie from here on out. We have a foundation. It was one of those years that I just put my head down and worked hard. It was stressful, and it all came together. Looking back, it was one of the best years of my life.”

It was all a dream

For Fostvedt, putting out his first ski film was a childhood dream. As a little gromet himself, he remembered going to Teton Gravity Research and Matchstick Production films at the old nexStage Theatre in Ketchum—where The Argyros now resides.

He lived for the moments when he and his friends met their favorite professional athletes, sharing memories, taking pictures and getting autographs. Those ski stars paved the way for Fostvedt and his comrades, something he always wanted to do when he got the chance to put out his film. Being a mentor—or, as he put it an, “uncle” to the new generation—is something he strived for.

Fostvedt always makes time for younger skiers who are fans. To them, he’s part of the old guard of skiers, like the athletes who paved the way for him. In many ways, he bridges the gaps between generations. He understands the skier code of the old-school ways, but with a youthful eagerness where children find comfort and inspiration.

Fostvedt says couldn’t have done it alone. He credits his older brother, Stephen, for being his biggest fan. And Collin Collins, a longtime mentor who has turned into a lifelong friend.

“He’s been my best friend for 20 years,” Fostvedt said of Collins. “It all started with me looking up to him. He’s the one who showed me all the ski movies back in the day.”

Collins, Barrymore, Cincotta and Josey are all part of the same generation of skiers and riders who grew up together, ripping around Bald Mountain at the same time.

And this place loves him back.  

Oh boy. He’ll be popular at the retirement home someday.