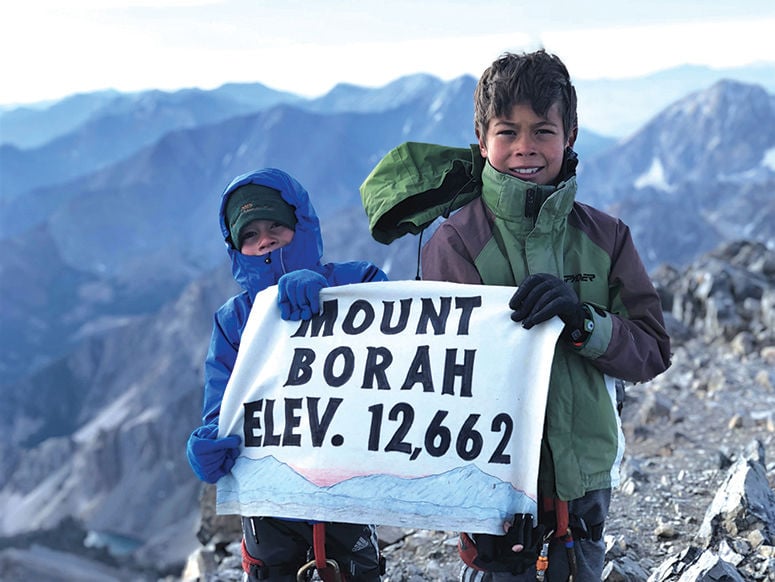 Cody Lloyd, 6, and brother Thijs, 8, stand on top of Mount Borah, the highest peak in Idaho, in the Lost River Range. Borah was the eighth out of nine 12,000-foot mountains they scaled this fall, a pursuit that made Cody the youngest person to climb all of Idaho’s “Twelvers.” 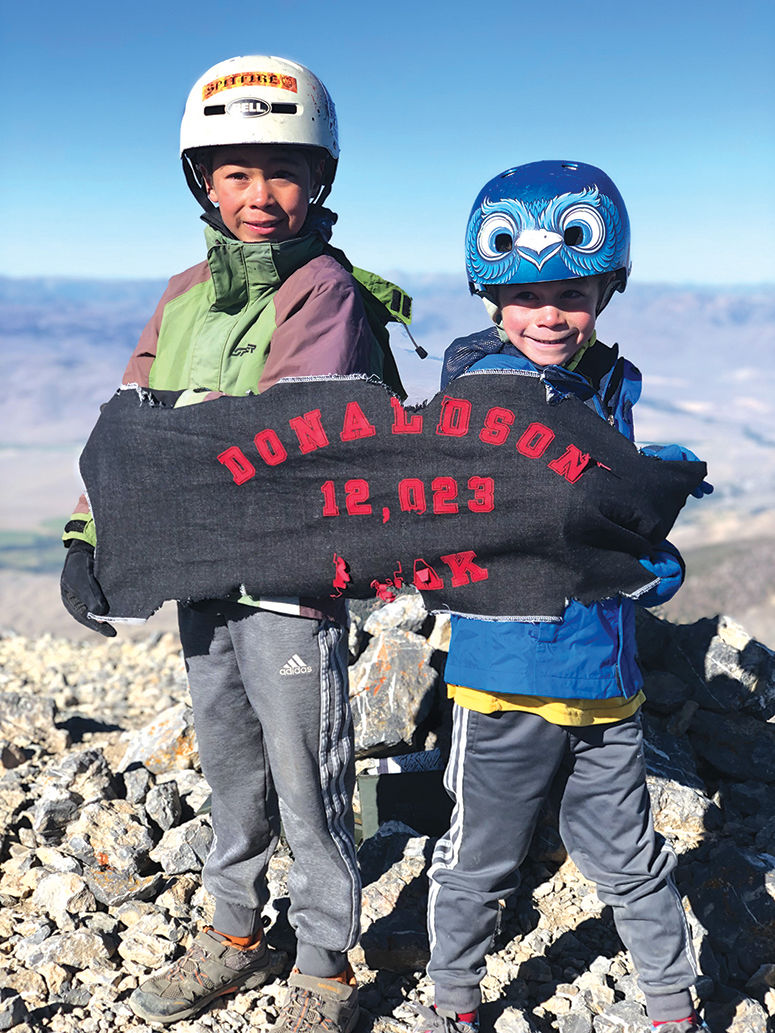 Since he can remember, Ketchum resident Cody Lloyd has always felt safest in the mountains. Every winter, he’s accompanied his parents and older brother, Thijs, to backcountry yurts at Galena Lodge, and since he could walk he has regularly climbed up to the Roundhouse on Bald Mountain.

This year, Cody—age 6—decided to do something slightly more ambitious.

It all started on a backpacking trip with family friends, according to parents David Lloyd and Rachel Wolfe.

“We were out North Fork, up Prairie Creek north of town on a hike with friends this summer, and ended up on the top of an unnamed mountain,” Wolfe said. “That got the boys thinking about climbing bigger ones.”

Cody and Thijs, 8, filled in the story from there.

“I asked Dad, ‘Is this the highest mountain?’ and he said nope, that’s Mount Borah,” Cody recalled.

David Lloyd then informed his sons that there were nine 12,000-foot peaks—or “Twelvers”—in Idaho.

Thus began the family’s eight-week mission to scale Idaho’s tallest peaks, a pursuit that would eventually net Cody the honor of becoming the state’s youngest to climb all Twelvers.

From knifelike ridgelines to deep, snow-packed gullies carved into mountain faces, David and Rachel were well aware of the challenges their sons would face in the nine expeditions to come.

Mount Borah, for instance, has a vertical ascent close to a mile high, and a ridge running between nearby Church and Donaldson peaks calls for complex ropework.

For Rachel and David, every trip also meant rounding up helmets, poles and ropes, along with plenty of snacks and water for everyone. While several peaks were not far from Ketchum, like Hyndman in the Pioneer Mountains, David said getting to Diamond Peak in the Lemhi Range meant a 4:30 a.m. wakeup call and a three-hour drive in the dark.

“If it wasn’t for Cody’s willingness, there would’ve been no way we could do this as a family,” David said.

The family pursuit began in early August, at a rate of around one peak per week for eight weeks straight.

“The boys knew I had a work trip coming up, so we didn’t have a lot of time,” David said.

He added that it was important that his family’s lifestyle wouldn’t detract from his sons’ school and extracurricular activities, which always come first.

“We’ve never missed any school, or work or Saturday soccer games,” David said. “Every week, Rachel and I would reevaluate if the boys wanted to go climb the next mountain—and every time they would say yes.”

A compact climbing schedule also decreased the chances of encountering an avalanche or loose scree.

“You kind of want to do it in the summer or early fall, because in winter and spring there’s still a lot of snow and loose rock,” Thijs said.

With the sun beating down intently, the family set out to their first mountain—Leatherman Peak, elevation 12,228 feet.

“We thought we should do Leatherman first because it isn’t as technical and there’s lots of big rocks you can hold onto,” Thijs said. “Hiking up was easy but on the way down, you had to watch out for rockslides.”

He inserted a piece of advice.

“Rockslides can be fun to go down, but if you see one and you’re on a ridgeline and the guidebook doesn’t say anything about it, don’t go down it because they are usually drop-offs and that’s how a lot of climbers die,” he said.

At the top of Leatherman, all family members were treated to impressive views of the Lost River Valley that spread before them thousands of feet below. They also rammed into another surprise.

While Leatherman proved to be a relatively easy and rewarding climbing experience for the family, Rachel said Diamond Peak—up next—was more of a hair-raising experience.

“We were close to the top by early morning, and these clouds formed really quickly. We had nowhere to go,” Rachel said, describing a “freak” electrical storm.

“It was way worse than a thunderstorm,” Cody said.

Thijs agreed. “We were too late when the bad weather came in. I touched Mom, and her hand zapped me,” he said.

A strong electrical field on the peak had created what meteorologists call the “St. Elmo’s Fire effect,” a bluish, luminous plasma that causes audible crackling and can make one’s skin buzz. Luckily, David’s father was with them and knew what to do from a prior run-in with the same phenomenon—drop all metal objects and run.

“I threw my backpack down the mountain and we ran down until we were able to get the boys’ metal climbing gear off without shocking them, which took a few tries,” David said. “The event ended when dime-sized hail fell for five minutes, and after that there wasn’t a cloud in the sky.”

The seven following mountains presented their own unique challenges. Breitenbach Peak required them to cross a mile-wide boulder field, for example, and strong winds on Mount Borah made footwork tricky.

“My shoes got holes in them and we had to duct tape them,” Cody said. “And we got our socks wet a lot, but at least our mom bought extras.”

For Cody and Thijs, spending time with family high over alpine forests and glacial lakes made the grueling ascents worth it. (Card games were a favorite while camping.) A strong brotherly bond also helped, David said.

“Thijs cheered on Cody the whole time—he knew this was his goal and he wanted Cody to win, so he did everything he could to make that happen and hand him some positive reinforcement,” he said.

Cody agreed. “Thijs helped me out the most. He even let me be first [to the top] on Borah.”

By late September, the family had scaled all of Idaho’s 12,000-foot mountains except for Lost River Peak.

Cody found the large swaths of snow and ice on the mountain’s crevices the most challenging.

“It was up to here,” he said, gesturing to his thighs. “The snow was warming up and the rocks were falling down everywhere.”

“We had been following one guy who tried to go up but had to turn around at the summit because the snow was too deep,” Thijs said. “It was hard. But climbing always feels safe, because we always have so much stuff to do. Usually, I just want to get to the top as fast as I can.”

David said that after Cody and Thijs stood on Lost River Peak, a celebration involving the boys’ favorite food—Tim’s jalapeno-lime chips—was in order.

“Fun was the No. 1 goal,” he said. “And, of course, safety. It was great to see the boys become very skilled at reading the mountain, so they knew which way they could go and which way is dangerous. Sometimes, it will seem like the right route, but it’s a trap.”

From speaking with Cody and Thijs, it’s clear the kids have been raised in mountain culture; each is comfortable using climbing terminology, like “scree,” “gully” and “cliff-out.”

Both Rachel and David grew up steeped in alpine culture, too. David’s father is an avid hiker and skier, and Rachel’s aunt—whom Cody and Thijs affectionally refer to as their grandmother—worked as a climbing guide on Denali in Alaska.

“We know what the boys have accomplished is unusual, but they’ve grown up following the sport,” David said.

While Cody and Thijs’ peers tend to gravitate toward sports stars like LeBron James or Roger Federer, the brothers prefer to watch rock climbers Tommy Caldwell and Jimmy Chin on YouTube.

They’ll also emulate their heroes’ moves on two climbing walls that David installed in the home—one in the backyard and one in the basement.

Like the professional climbers the boys look up to, they’ve set their sights high.

“I want to climb Mount Ranier and Mount Whitney in California, and maybe Devil’s Bedstead too,” Thijs said.

Cody broke into a wide smile while contemplating his “goal” peak.

“Denali is my dream,” he said.

Cody: “Don’t go close to a cliff when it’s warm out. And a good tip is don’t think about height—just do it.”

Thijs: “If someone wants to climb a mountain but they’re scared, maybe they should start on a little hill and practice on that, and once they’ve done it enough and think it’s pretty easy, they can move on to something a little harder.”