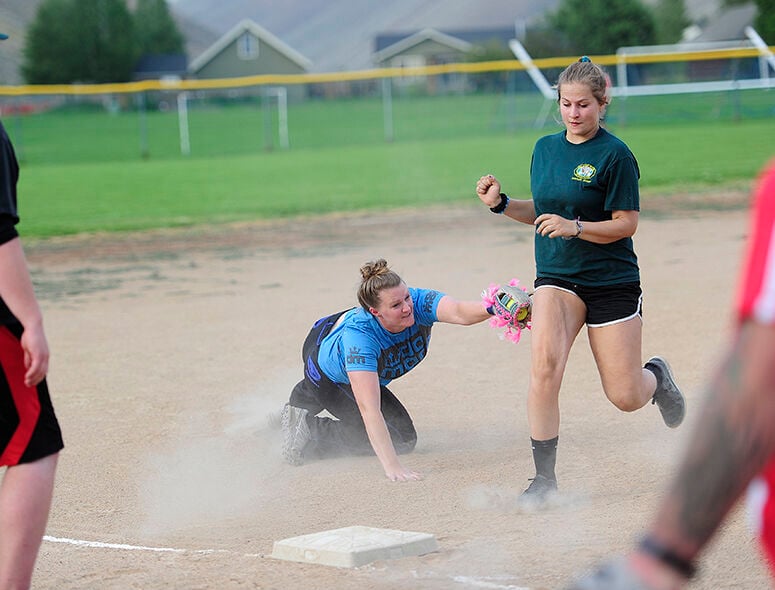 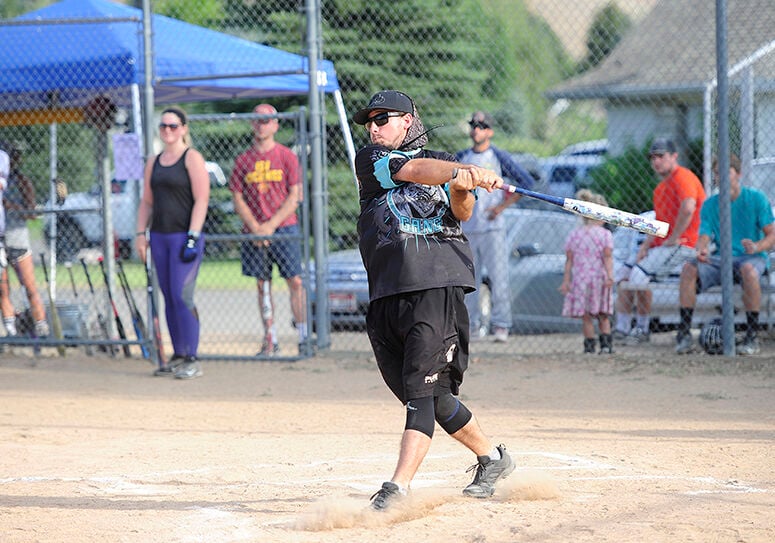 Whitehead’s Landscaping left center fielder Chase Uhrig gets all of a pitch during the Bellevue Summer League slow-pitch softball tournament championship game won Whitehead’s 11-9 over 7 Fuego/Silver Dollar. Uhrig (2 hits) made all the catches in the field for the champs.

Whitehead’s Landscaping left center fielder Chase Uhrig gets all of a pitch during the Bellevue Summer League slow-pitch softball tournament championship game won Whitehead’s 11-9 over 7 Fuego/Silver Dollar. Uhrig (2 hits) made all the catches in the field for the champs.

A quiet, defensive masterpiece of a slow-pitch softball game wrapped up the Bellevue Summer League tournament Wednesday night just 24 hours after all the offensive thunder of a 44-run, 54-hit potboiler between the same two teams.

Whitehead’s Landscaping (11-4, 27-6 over two seasons) emerged as the repeat tourney champion when extra hitter Austin Hafer launched the game-winning, two-run walk-off homer to end the only extra-inning game of the season 11-9, in eight frames.

The tough-luck losing team was regular-season champ 7 Fuego/Silver Dollar (12-2, 27-6). 7 Fuego, trailing all game, miraculously roared from behind to lead 8-7 with a two-out, six-run rally in the seventh and final inning of regulation.

A monstrous grand slam homer by pitcher Mason Kluge finally put 7 Fuego ahead. But Whitehead’s was the home team with the chance to tie it.

In home seventh, Andrew Nelson tied the game 8-8 on a one-out triple and Ashley Hicks RBI infield out. That set the stage for Austin Hafer’s game winner, after Hunter Thompson’s RBI single for Whitehead’s in the eighth.

Tuesday at O’Donnell Field, Whitehead’s had forced the deciding game of the six-team double elimination tournament with a 28-16 victory—Hafer the star by hitting for the cycle and making a fully-extended miracle catch.

In contrast, Wednesday’s title game featured one fine defensive play after another. The combined 20 runs and 29 hits between the two teams was different from not only Tuesday’s semi-final clash, but also was a far cry from last year’s title game won by Whitehead’s 25-24 over Fuego.

Banged up from his amazing catch in right center Tuesday, Hafer was the extra-hitter Wednesday and gave Whitehead’s a 2-0 lead with a first-inning solo homer. The champs kept chipping away and led 7-2 after six innings.

In the seventh, three straight singles by JonMarie Shaw, Guisasola and Jamie Stone filled the bases for 7 Fuego. Brandon Beall delivered a run with an infielder grounder and Sarah Soulis hit a sacrifice fly. Levi Perryman (3 hits, 2 runs) kept the rally alive with a bloop single and, with two outs, Kluge crunched his grand slam to deepest center.

Mike Kluge delivered 7 Fuego’s run in the eighth, and Thompson re-tied the game 9-9 with her second single. Hafer stepped to the plate and ended the classic with his walk-off.

Adding two hits apiece for Whitehead’s were Tidwell, Chase Uhrig (5 outfield putouts) and Nelson, while Ruiz went 3-for-3. Jared Riemenschneider filled in ably for Hafer in the outfield, and Lacey Ellsworth made the catch of a towering Thomas Black fly ball look relatively easy.

Mason Kluge went 3-for-3 with 5 RBI for 7 Fuego, while Guisasola and Stone had two hits each.