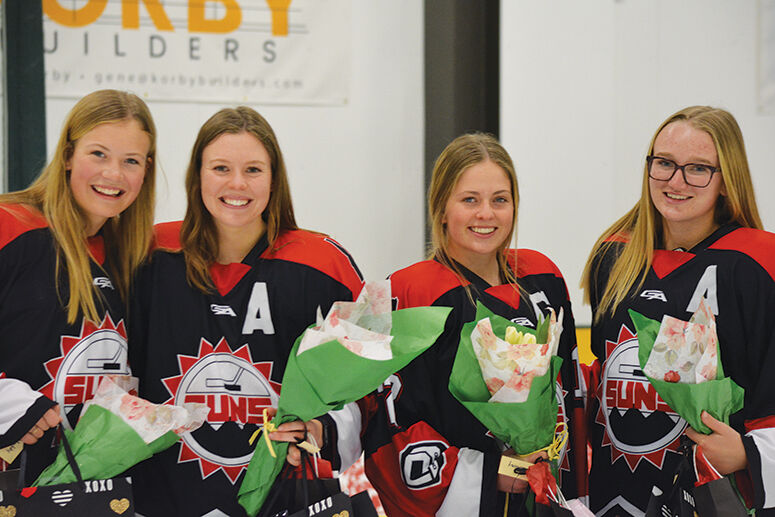 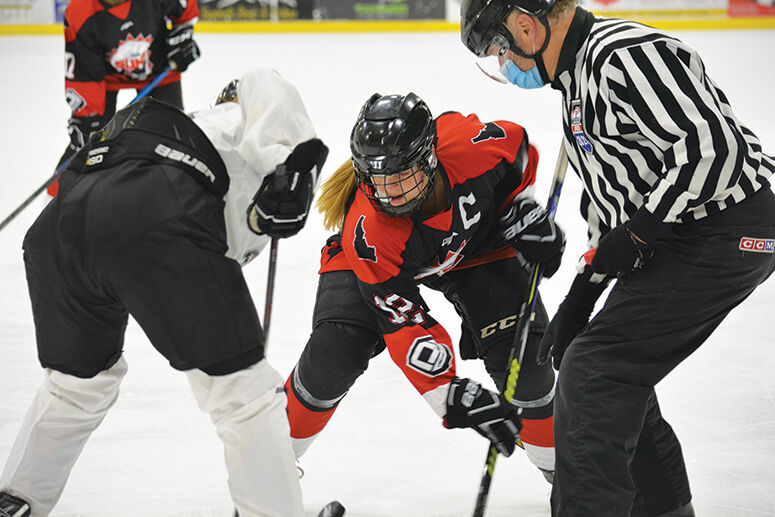 The Sun Valley Youth Hockey U19 girls’ team took to the ice over the weekend for a three-team home tournament at Hailey’s Campion Ice House.

The weekend round-robin tournament (Feb. 5-7) saw the Boise Fireblades and the Idaho Falls Lady Eagles come visit. The Fireblades ended up winning the entire three-day, three-team tournament by going 2-1, with the deciding championship win coming against the Suns, 3-2.

The weekend also served as a way to show appreciation to the Suns’ seniors.

“I really rely on them as our ‘core four’ on this team.”

Seniors Daisy Buxton, Maddy Dunn, Marcella Fisher and Penelope Weekes were honored at the Friday game before the Suns’ matchup against Boise.

“With no seniors on the team last season, these young women have been the leadership on the team for two years now,” Sun Valley U19 girls head coach Jo Golub said. “I really rely on them as our ‘core four’ on this team.  They are exemplary, both on the ice and off, with success in hockey, academics, and other activities. I’m really proud of these four young women. Their leadership will be missed.”

In the opening game against the Fireblades, the Suns shut out Boise, 5-0, behind goals from Taylor Nelson (2), Nikki Lahnum (2) and Lola Randolph (1).

SVYH had just recently—and cautiously—allowed games and travel. Up until now, these were not possible due to COVID-19 precautions.

According to SVYH President Heather Daves, at the beginning of the 2021 season, SVYH focused on in-house practices and scrimmages to maintain high quality programming while keeping players healthy and safe.

Daves added that Hailey Ice’s Sarah Benson has been the leader in rink management to keep protocols in place and in conjunction with SVYH so the Suns can hold successful practices and games.

During the tournament, Hailey Ice allowed limited spectators with masks required. Players were allowed to bring two family members each.

After Senior Night, the Suns returned Saturday with another victory over Idaho Falls, 2-0, as goalie Grendel Sprong was once again strong in the net, claiming her second shutout of the weekend.

Buxton scored both goals for the Suns while Amanda Dunn got an assist on one of Buxton’s goals.

On Sunday, Boise beat Idaho Falls 9-1 to earn a spot in the championship game against Sun Valley.

The Fireblades recovered from the weekend’s opening loss against the Suns and cashed in on momentum against Idaho Falls to return the favor in the championship game.

O’Connell scored the first goal of the game in the second period for the Suns, but Boise answered right back and scored two goals before the second intermission.

Golub said she saw progress in her team over the weekend, which bodes well for the future.

“I truly saw a coming together of the team as a whole where the ladies were able to finally put all the systems we’ve been practicing for the past four months to use in a game setting,” she said. “The players are finally settling into their lines and roles and I only see this team getting better leading up to State in Idaho Falls at the end of the month.  I’m going to expect big things out of all the ladies and I know they’re up to the task.”

Up next for SVYH, the Idaho Amateur Hockey State Tournament will be held Feb. 25-28 in Idaho Falls. That tournament is for all teams U14 and higher, with both boys and girls teams competing.