Local racers gathered for another year of the Baldy Hill Climb on Saturday. 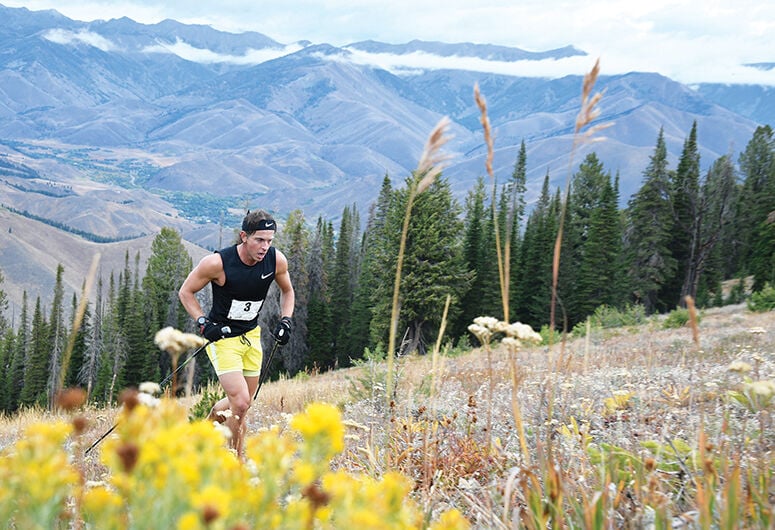 Local racers gathered for another year of the Baldy Hill Climb on Saturday.

Mere seconds separated the top finishers for Saturday’s race up Warm Springs to the top of Baldy as Johnny Hagenbuch, 18, beat Karl Schulz, 22, by a hair to take the 42nd Sturtevants Baldy Hill Climb.

Hagenbuch’s time of 37 minutes, 25 seconds was three seconds faster than Schulz, who finished at 37:28.

Ketchum iron man—and all time leader with 10 wins—Miles Fink-Debray, 32, came in moments later with a time of 38:23. This was Fink-Debray’s 20th BHC event.

Both Landis and Goble are also SVSEF team members.

Earlier in the year, Singer posted the victory in the Standhope Ultra Challenge 30k footrace.

This year’s Winning Family Team was the Lloyd/Woods Family, which was composed of David and Rachel and their two sons, Thijs and Cody. Their aggregated time was 3:08:36.

The annual BHC is hosted by the SVSEF with all proceeds benefitting the SVSEF Youth Ski and Snowboard programs.

This year’s BHC was different than in the past.

Due to COVID-19 concerns, the 2020 version of the BHC worked on a more basic format with only the foot climb competition. There was neither a bike race nor Baldy Cheeso Double. There was also no hike or race class separation.

*This story has been updated to reflect that Johnny Hagenbuch is not a senior at Sun Valley Community School.

Let's give Jon the the benefit of the doubt as he has some YUGE shoes to fill with the retirement of Jeff Cordes who served ad sports editor for 43 years. Jeff was certainly one of a kind.

Here's a link to your own paper's article in February.

The one that calls Hagenbuch a "senior" in high school. Last school year.

Where is Cordes when we need him??

Are you significantly curtailing your normal Thanksgiving get-together?

Amid the uncertainty surrounding COVID-19 in the Wood River Valley, one thing has …

‘The Coronavirus Capital of Idaho’