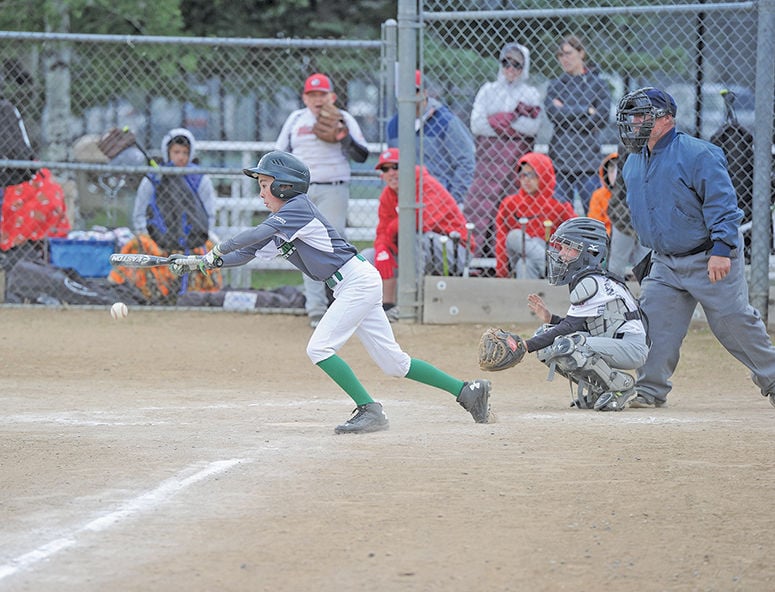 Wood River hitter Finn Naghsh belts out a base hit during the 2017 Ray Nelson Invitational youth baseball tournament in Hailey. 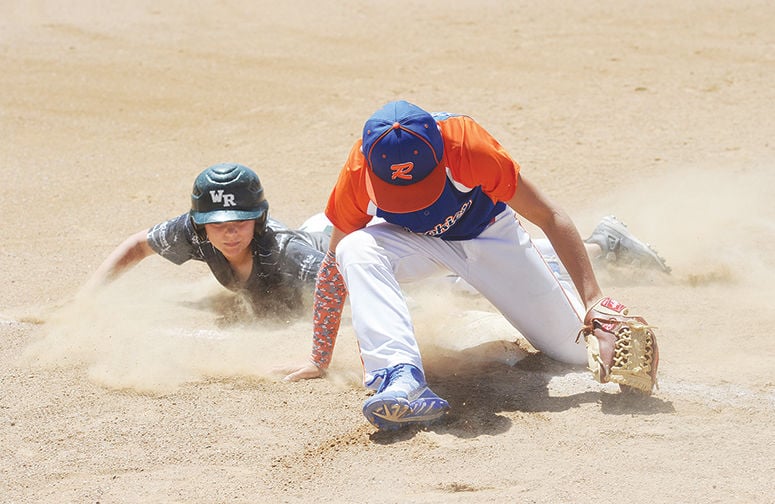 Sliding on the basepath in 2016 Ray Nelson Invitational baseball action in Hailey.

Wood River hitter Finn Naghsh belts out a base hit during the 2017 Ray Nelson Invitational youth baseball tournament in Hailey.

Sliding on the basepath in 2016 Ray Nelson Invitational baseball action in Hailey.

NOTE FROM THE PEANUT GALLERY

Major League Baseball was supposed to open its 2020 season Thursday, March 26 with all 30 teams playing games in the earliest opening ever for the complete roster of clubs. The coronavirus health crisis put an end to America’s spring ritual of “Play Ball!” The games will be missed by countless fans.

Hopefully the teams and young players will soon return to the field and their games. In the meantime, take a short, socially-distanced drive down Memory Lane to Nelson Field in Hailey for an account of the Ray Nelson Invitational tournament that was published in the Idaho Mountain Express on Aug. 9, 1989. Batter up!

Out on the mound, in full view of nearly the entire world, the pitcher cuts a commanding presence.

He winds up, but it isn’t a full major-league wind-up. It’s an impatient rush job, herky-jerky, get on with it, typical of a Little League kid.

The fastball heads toward home plate and rises on a jet plane trajectory.

The batter bails out, ducking for dear life. Helmet and bat go flying. The catcher and umpire bail out, raising their forearms for protection, whipping out of the box as fast as they can. The ball crashes into the backstop wire, about 12 feet off the ground.

“Little lower, Robert,” yells one fan, breaking the brief, watchful silence from fans in the bleachers.

“Right down the tube, play catch

“Force at third, get the easy out!”

“Zip it in there, Robert, right in the mitt!”

Such sideline chatter, summoning all the advice of thousands of years of sandlot experience, has a distinct beginning.

That’s the realization that Ball Three has happened, face it, but better things must lie ahead—with the proper coaxing—or else the batter from third is going to be forced home with the go-ahead run.

The bases are loaded with enemy shirts. Two outs. One to go.

And the chatter has a distinct end. That’s the realization that whatever words of wisdom are imparted while the pitcher waits for the ball’s return and paces nervously around the rubber—the boy has to do it himself.

The batter digs in. The umpire adjusts his equipment. The catcher confidently raises his pinky and index fingers in the air. The second baseman makes sure the outfielders are still out there. Vastly encouraged by the turn of events, the base coaches outline every possible situation to their puzzled runners.

His socks dangle around his ankles, one sock at half mast, the other fully collapsed. His uniform knees are patched. He’s skinny as a rail. His hat doesn’t sit right. By God, he’s wearing glasses!

He’s got nothing but hope.

An infield chant stops the sideline chatter dead in its tracks, mercifully quieting the well-intentioned parents. The boys have taken charge and all is well for the moment—even if they don’t get out of the inning without major damage.

MEETING AT THE MOUND

This is Little League baseball, maker of dreams and champions. And the best bargain parents can buy in the heat of the summer and the absence of school’s regimen.

Little League is 50 years old this year. In the decade-long renaissance of baseball across the country, Little League has never been younger.

Requirements to play are being young at heart, and being able to play right field at the very least.

Summer requires plenty of variety for a youngster. You ante up for the inevitable scout camps, sports camps, swim teams, tennis clinics and summer school sessions. At some point you have to close the checkbook.

Baseball doesn’t cost much. It cost $15 to join the Hailey Little League this season.

The games began in early June and continued through mid-July. Fourteen games. Five or six practice sessions. Maybe 28 to 30 hours of baseball. Every night, it seemed.

That’s the dollars and cents of it. But you can’t put a price tag on the games and the memories. Especially when you coach the kids.

I used to think 5- and 6-year-olds, cute as buttons, were the best to coach. That was when our son was 5 and 6 and I was the parent making out the lineup card, toting the ball bag and adjusting the batting tee.

Just getting the kids running in the right direction was a big plus.

Now our son is 7, and the 7- and 8-year olds are the best to coach. They’re learning to make the plays. Tomorrow he’ll be 9, then 10. There will be real pitching and base stealing. There will be choices to make.

As coaches of the 7s and 8s, we never said there were good and bad choices. But you can bet your Jose Oquendo baseball card that in certain cases we suggested there were better choices that could have been made.

Baseball is a game of reaction, though, and you never know how the ball is going to bounce.

BACK ON THE BASEPATHS

Take, for instance, a play during the Ray Nelson Invitational baseball tournament in Hailey July 30. It was the championship game of the 9-10 year-old tournament, with Ketchum playing Valley of Hazelton.

Runs were being scored in bunches. There were more baserunners than customers at the hamburger hut. Balls were taking weird hops and relay throws were sailing all over the field. For all the excitement, the coaches were remarkably restrained.

One time, Valley pushed their biggest and slowest player, a boy whose size dwarfed the others, all the way around to third base. Runners on second and third, maybe one out.

The ball skidded through the pitcher’s legs, sending baseball’s chain reaction into high gear. The big Valley boy took off lumbering for home. His choice had been made.

Suddenly, he applied the brakes and chugged to a stop. Wonder of wonders, the defensive team had actually backed up the misplay!

Two Ketchum infielders converged on the loose ball. Counting the pitcher, there were three Ketchum players in the immediate vicinity of a hardball that was constantly changing direction by hitting every rock and pebble on the dirt infield.

The big Valley runner realized he was a dead duck at home, so he rammed his battleship into reverse and, with all the speed he could muster, began the long run back to third.

Aghast, he discovered his own teammate was pulling into the same hot corner area, having sprinted down the baseline from second.

Only one alternative remained.

Resigned to his fate but clinging to a final hope, the big Valley boy was forced to retrace his steps and face the humiliation of being tagged out by 20 feet at home.

He headed home again, his face a picture of total panic.

But it takes two to tango.

Confronted with a myriad of choices at the sight of two surprised Valley runners arriving at the same base at approximately the same time, the Ketchum fielders savored their embarrassment of riches.

The scene was total chaos. The throw was made to third base, but the runner from second was standing on the bag, safely. Ketchum needed to take another course of action to deal with the big Valley boy.

Parents hollered. Fingers were pointed. The big Valley boy continued to barrel down the baseline with the weight of the world on his back.

The screams and yells of friend and foe alike eventually convinced the Ketchum fielders to throw the ball home. They had plenty of time to make the play. Then the last unexpected twist unfolded in the drama.

The throw was high.

The catcher jumped as high as he could and unbelievably caught the ball at the top of his stretch.

And the big Valley boy, sensing a light at the end of the tunnel, slid with all the base-running canny of a Vince Coleman. It was a good slide. It was a good tag. But only one call could be made, and the umpire made it as faithfully as he could.

The best things in life seem to happen on the base paths.

Our team was right in the middle of a very close game, a high-scoring affair in which the balls leaking through the legs of 7-year-olds outnumbered balls that boys and girls caught by about a 40-to-1 margin.

Catching the ball in the air with a multitude of fans and family members watching is a major accomplishment for a 7-year-old.

At one point, the bases were completely loaded with kids of every size, shape and attention span, all wondering what to do next, just like the fielders. Plenty of advice was coming from the peanut gallery.

The coaches yelled “Any base!” for about the 20th time in the inning, hoping for a small miracle.

The ball was hit in the air, toward one of our players, the second baseman. Of all the fielders, he had a reasonable chance of getting to the right place and staying under it.

It took forever to rise, and forever to fall, but the arc of the ball demanded everyone’s rapt attention. The ball fell into his glove and stayed there for the second out.

Meanwhile, runners began running and stopping and heading out on trips to Who Knows Where.

The reaction to the successful catch from the mothers in the grandstand was one of nearly total approval. They gave grateful applause for the out, with virtually no dissension.

In contrast, the reaction from the fathers was completely different. Unsatisfied, they pointed frantically to second base, from where the baserunner had already departed. A double play was in order.

As coaches, all we had to do was get the second baseman’s legs moving in the right direction, and we’d be out of the inning before the 10-run rule went into effect.

Coaches hope for such small opportunities for progress. They’re always looking for the boys and girls to make the quantum leap between reacting to the ball, making a play and recognizing what is needed next.

It’s up to the player, though.

Our second baseman stood there, trancelike, the ball safely tucked away, looking at our dugout and our side of the ball field with a satisfied look on his face and just a hint of a smile. He may have realized that he was holding our hopes hostage.

What may have jarred him into action were the fathers who were practically crawling up the chain link fence in their attempts to get him moving the few short feet over to second base for the double play.

He ran quickly to second, arriving a split second before the backtracking runner. He stood squarely on the base with the ball in his glove. He looked at our sideline again, his eyes the size of beach balls and his smile just as wide.

Out of the inning!

We waved the players in, yelling “Hustle Up!” and they ran like deer to the water cooler.

Learning baseball is running a few short feet and coming a mile.