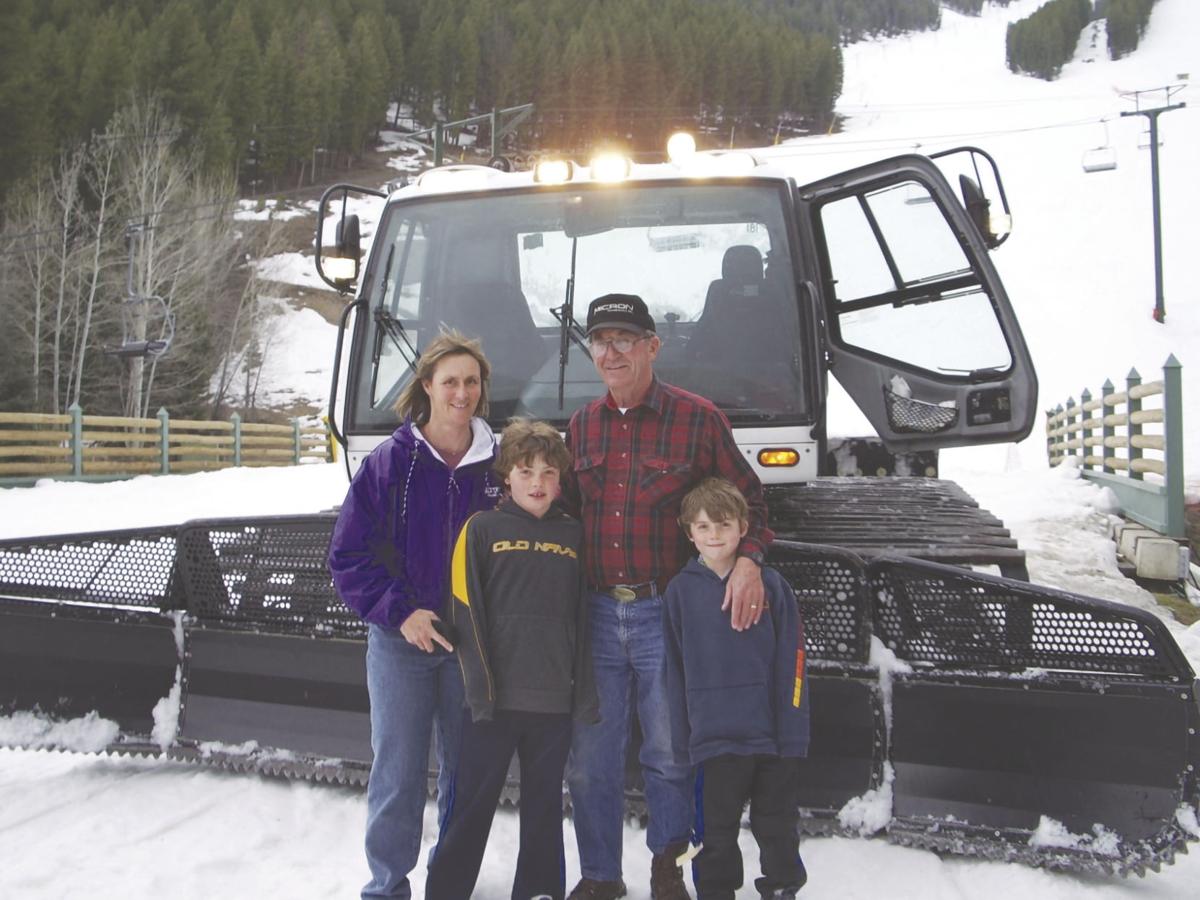 Jim Savaria worked for Sun Valley and the Sun Valley Ski Education Foundation on Baldy for 50 years. He first served on the Sun Valley Ski Patrol in 1956. From 1976-2006, he groomed the ski runs and drove a snow cat. Here, in this 2005 photo, Jim poses alongside one the machines with his daughter-in-law Adele Savaria and grandchildren Kaden James “KJ” Savaria, 9, and Austin Savaria, 7. 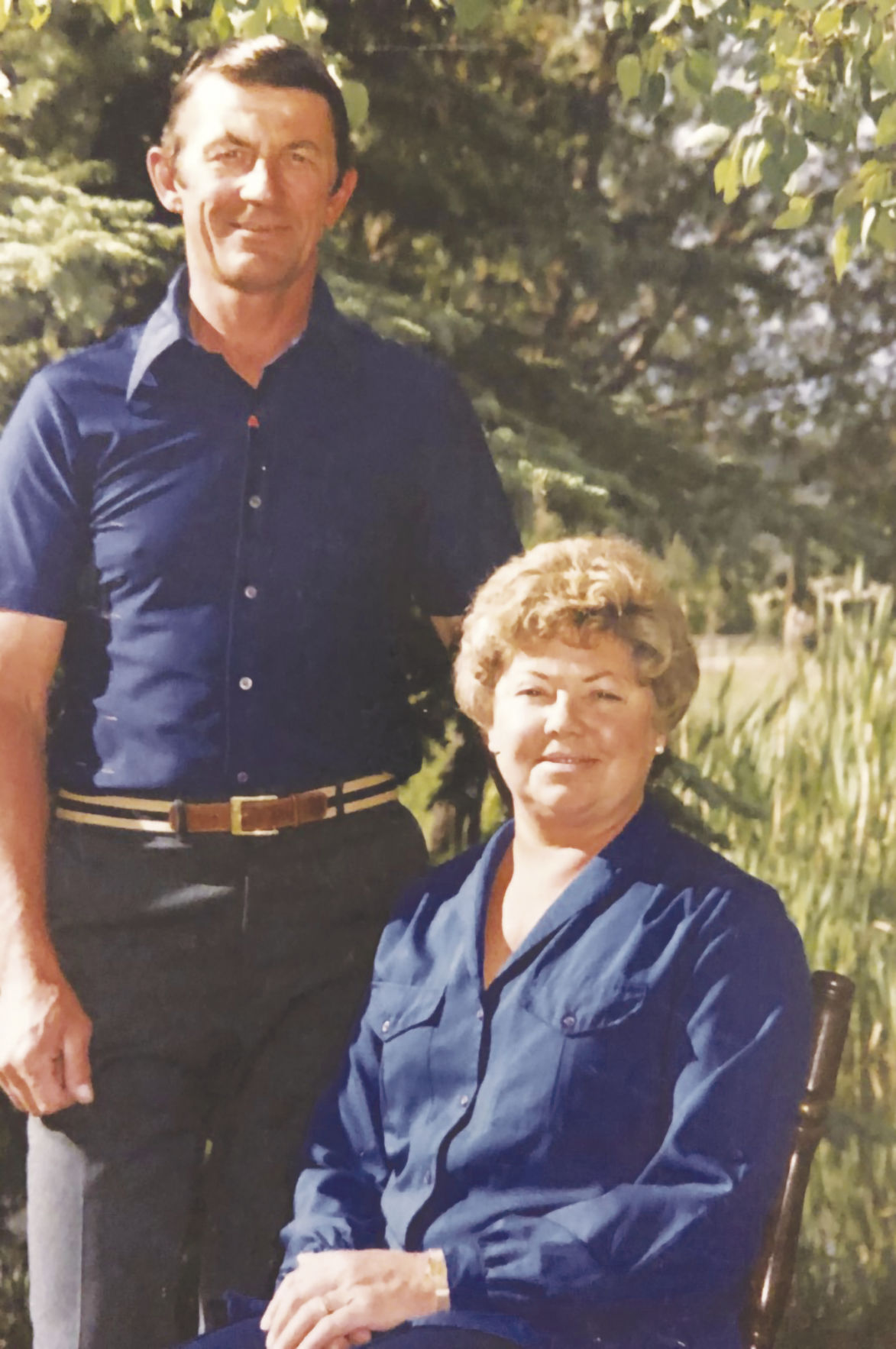 Jim and Shirley Savaria started their 58-year marriage at young ages. Jim was 21 and Shirley 20 when they married in Hailey Aug. 23, 1958. A lifelong Wood River Valley resident, Hailey-born Shirley Jean Savaria, daughter of Vern and Dorothy Davis, worked for Sun Valley Company for many years as a switchboard operator. She also sold lift tickets. You could also find her working at The Konditorei, Pendl’s Bakery, Warm Springs Restaurant and Bitterroot Property Management. She served on the Blaine County Historical Society Board of Directors.

Whenever you talk about the early days of Baldy skiing and the origins of the Sun Valley Ski Education Foundation (SVSEF), one name that keeps coming up is Jim Savaria.

He didn’t only coach on Baldy where he also served on the Sun Valley Ski Patrol and Sun Valley Ski School. Savaria taught kids at Hailey’s Rotarun Ski Area when its rope tow was first installed during the 1950s.

Savaria groomed Baldy’s sky runs for 30 years on snow cats. And he was married to his beloved wife Shirley for 58 years.

For nearly a half century, he worked on mountains and did his jobs thoroughly and well.

In the near future, Savaria, 83, will be formally inducted along with seven other individuals as the Class of 2019 of the newly-named Sun Valley Winter Sports Hall of Fame.

As his daughter-in-law Adele Savaria of Hailey has written, “Jim will be remembered and respected most, by the Wood River Valley kids he has coached. If you ask any of them who their coach was, his name will be the first name you hear.

“He will be remembered for his unwavering belief in hard work, honesty and fairness.”

After retiring 14 years ago, Jim and Shirley enjoyed life with their three children, nine grandchildren and four great-grandchildren, along with siblings, nieces and nephews.

Shirley passed away at 78 three years ago. Jim keeps busy tinkering around at his house on an acre of land about three miles south of Twin Falls.

A lifetime of hard work

Fourteen years ago, when longtime SVSEF coach Michel Rudigoz accepted the Jack Simpson Dedicated Coaches Award during the 30th annual Fall Game dinner, Rudigoz in his thank-you remarks said about Savaria, “Jim, you are my inspiration in this town.”

Not a bad compliment about someone whose first pair of skis was bought from Sears and Roebuck, and who first learned to ski on a slight slope down from where the flagpole now sits at Hailey Elementary School.

Jim was 10 at the time. In that year, 1947, he paid 25 cents per day from the lessons he took from Ann Jeanette Winn Albrethsen of Gannett, the daughter of beekeeper Maurice Winn. Ann became the Wood River Valley’s first Olympic ski racer a year later in 1948.

The son of Albert and Alta Savaria, Jim Savaria was born Jan. 16, 1937 in Triumph where his father worked in the mines. Jim’s SVSEF nickname was “The Spaniard,” or “The Old Spaniard” by kids, as a way to point out his Basque heritage.

Savaria’s era with the ski team was roughly 1965-79, after which he retired from coaching and accepted the retirement gift of a shotgun—so he could chase birds instead of kids down hills.

He attributed much of the success of the new SVSEF in those years to Sun Valley owner Bill Janss and mountain manager Kenny Zimmerman. Both would do anything for the ski team and its athletes, making sure the snow surfaces were excellent for the young racers.

It was a time of great innovation. Allan Brooks of Ketchum‘s Brooks Welding developed what was called a “sheep’s foot” attachment on the snow cats to ensure great racing surfaces.

Savaria spent the final 30 years of his Sun Valley employment grooming the slopes on snow cats. When the new POMA lift was installed at Rotarun, he back-filled around the towers and later re-contoured some of the hill.

He started collecting awards. In 2004, Savaria was the first recipient of the SVSEF’s Jack Simpson Dedicated Coaches Award. He earned the Intermountain Division’s Jack Reddish Award. He accepted the Jimmy Griffith Award.

No honor was greater than his family with Shirley. Their children raised in Hailey are Patrick, Albert and Lynette. All were skiers, but only 1978 Wood River High School graduate Pat Savaria went hard at ski racing and coaching after that.

Pat attended Colorado University and Boise State before beginning his long coaching career in the valley in 1983 for the Sun Valley Ski Education Foundation. He has served in many roles. This past winter, he was SVSEF FIS coach. He also works in construction.

The Savaria family and sports

Jim and Shirley Savaria spent some of the most enjoyable days of their 58-year marriage as two of the most loyal Wood River High football fans from 2011-14 as coach Kevin Stilling’s Wolverines made their ascent to league champs.

Shirley loved her family deeply and would drive to the end of the earth to watch her grandchildren in any activity they were involved in.

Adele added, “I remember one night the rain was blowing sideways in Twin Falls, and they were still there rooting.”

In 2011, KJ was a first-team All-Great Basin Conference outside linebacker. The next season, running back KJ led the Wolverines in scoring and had four 100-plus rushing games en route to a 775-yard season.

Austin was a sophomore on that 2012 Wolverine grid team. By 2014, he was an important kick returner and pass receiver who turned into a running back like his brother as Wood River’s 6-4 season came to an end.

On a wet and cold November day at Hailey’s Phil Homer Field, Wood River hosted its first home playoff game in 19 years against Skyview of Nampa. Skyview eventually won 39-20, but Savaria provided the heroics in the final five seconds.

He finished a 191-yard, two-touchdown rushing effort with a 49-yard touchdown gallop on the final play of the playoff game. For the season Austin rushed for 455 yards and caught 24 passes for 618 yards.

The Savaria brothers both attended and graduated from Boise State University, KJ in construction management and Austin in general business.

All in all, the Savaria family has been quite an athletic group, one that has contributed much for years to the SVSEF.

Pat’s wife Adele Allender Savaria moved to the Wood River Valley as a teenager from Squaw Valley, Ca. so she could join the Sun Valley Ski Team. She was a tennis player and an alpine skier in high school here.

Finishing her junior year at Wood River in 1982, Adele partnered with Anise Morrow to win the Idaho State Class B girls’ doubles tennis championship for the Wolverines. And from 1983-89 Adele Allender was a member of the U.S. Ski Team.

After her national ski team career, she matriculated at Albertson College of Idaho in Caldwell at age 24 and maximized her final year of ski eligibility—winning the national NCSA slalom, giant slalom and overall titles at Waterville Valley, N.H. in 1990.

She played three years of tennis for Albertson College, now named College of Idaho, making it to the NAIA nationals each year in women’s doubles before graduating the four-year college in 1993. In 2002, Adele was voted into Albertson College’s Athletic Hall of Fame.

Adele coached for SVSEF “A” and “B” teams from 1993-2001. She teamed with Pat to teach after-school ski racing at Rotarun Ski Area when their boys were in elementary school. The couple has returned to coach many years for SVSEF.

Last winter was truly a family affair of ski coaching for the Savarias of the different generations. Pat, Adele, KJ and Austin all coached on the hill for the SVSEF, extending the legacy of Jim Savaria even longer.

“That is one hot streak of Sun Valley ski racing DNA we can all be proud of.”

Well done sir. With all the glum and doom in the news, it's nice to read a story about a person who has meant so much to skiing in the valley...and the legacy continues with his children and grandchildren.