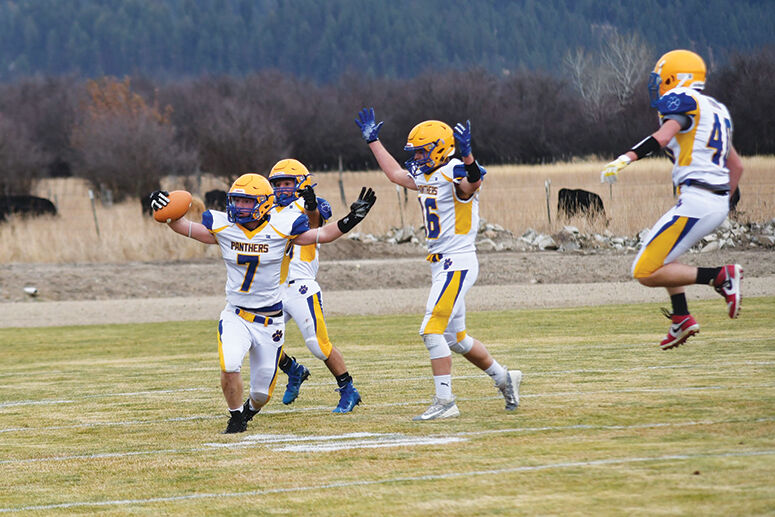 Senior Dallin Parke and the Panther defense stopped Garden Valley’s offense on their way to the 46-28 victory. 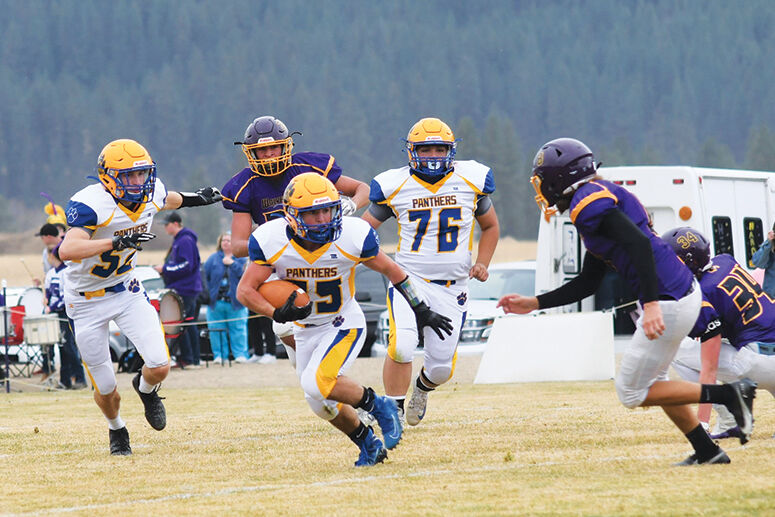 Senior Dallin Parke and the Panther defense stopped Garden Valley’s offense on their way to the 46-28 victory.

A confident Carey High School football team wore down a familiar foe in the Garden Valley Wolverines on their home turf on Friday, Nov. 6.

In doing so, the Panthers advanced to the semifinals of the Idaho High School Activities Association 1A Division 2 “Milk Bowl” state football tournament.

Playing with a sense of maturity, the Panthers scored 24 points in the second quarter, and relied on big plays and crucial fourth down conversions, to pull off the 46-28 victory at Garden Valley.

“We really grew up against a talented Wolverine team,” Carey head coach Lane Kirkland said. “We still have a few more things to work on, but we are headed in the right direction.”

The Panthers were 2-for-2 on fourth-and-goal conversions, while constantly deflating a Wolverine defense that by the end of the game was flabbergasted.

Coming off an 88-12 win over Rockland, Carey finally met a matchup that took some serious game planning.

While Kelly did score two touchdowns on offense, Carey succeeded by keeping the ball out of Kelly’s hands as a kick returner, which is where he is most dangerous.

On all of Carey’s kickoffs, the Panthers didn’t kick the ball for more than 25 yards.

Despite giving up great field position to keep the ball out of Kelly’s hands, Kirkland’s faith in his defense allowed for that strategy to work.

This was the fewest points Garden Valley scored all season after averaging 44 points per game.

To begin the game, Carey went with a run-heavy offense.

Working with only half the field, Garden Valley swiftly moved down the field and got in when Kelly scored from the 2-yard line.

At the end of the first, the game was close as Carey led 8-6.

The second quarter is when the Panthers separated themselves from the Wolverines as Carey scored on back-to-back drives.

After the Panthers stopped the Wolverines, Carey marched down the field and Smith found senior Ashton Sparrow for a 15-yard touchdown pass.

Smith was a perfect 10-for-10 passing for 169 yards and three touchdowns.

Sparrow finished with 68 yards receiving and a touchdown.

The Panthers totaled up 393 yards of offense and went 4-for-8 on third-down conversions.

Carey also managed to milk the clock by keeping the ball in the Panther’s possession for 36 minutes. Garden Valley’s time of possession was only 12 minutes.

Carey’s offense began to get into a flow by game’s end, which is something Kirkland noticed as his players began to call their own plays.

“The boys started to scheme on their own to keep the ball moving,” he said. “When our teams in the past have done that, they became really dangerous and unstoppable. This team is showing a lot of signs of that right now.”

Defensively, Carey was on point the entire game, especially in the second half.

In the third quarter, Carey forced Garden Valley to turn the ball over on downs after the Wolverines went for a fourth-and-goal from Carey’s 2-yard line.

Fields went for a quarterback sneak, but was stuffed.

“I was impressed with our defensive focus in the red zone,” Kirkland added.

With a sizeable lead, Carey’s defense kept the pressure on and the offense was methodical.

Parke had 17 tackles on defense while senior Chase Gross added 11.

Carey will now face Kendrick, which beat Watersprings 44-34 on Nov. 7.

Carey and Kendrick will match up against each other at 3 p.m. on Saturday, Nov. 14, at the Kibbie Dome in Moscow for a shot to play in the IHSAA 1AD2 state championship.

Pick up Friday’s edition of the Idaho Mountain Express for a full game preview of Carey and Kendrick.