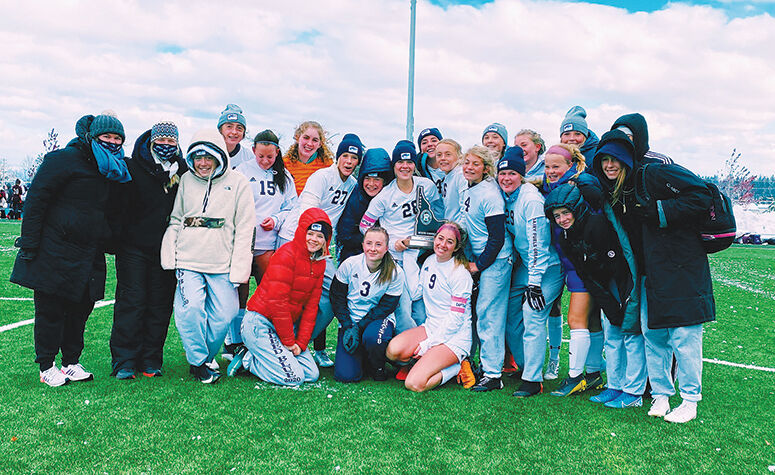 The Sun Valley Community School Cutthroat girls soccer team finished with the fourth-place trophy and the IHSAA 3A Academic championship. 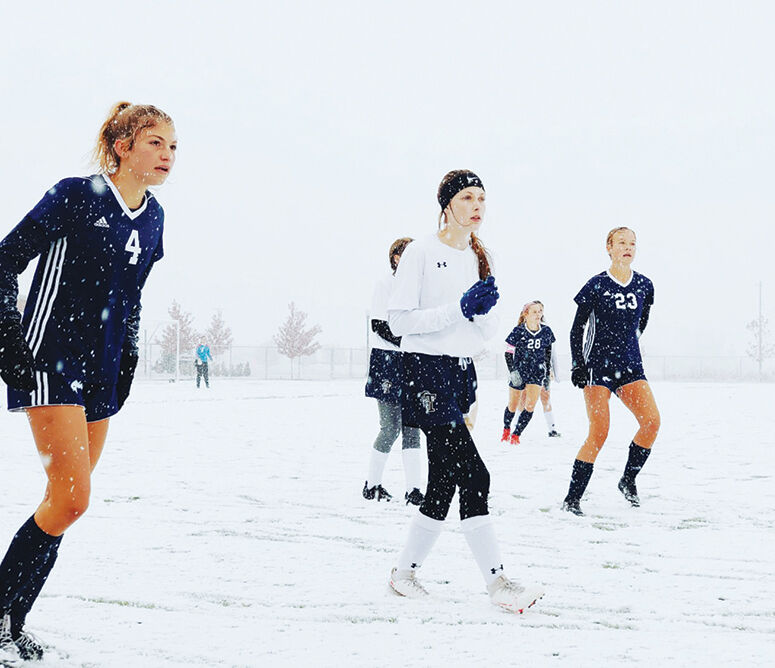 Seniors Lyla Maxwell (4) and Maddy Dunn (23) were ready for an intense match against Timberlake on Saturday, Oct. 24.

The Sun Valley Community School Cutthroat girls soccer team finished with the fourth-place trophy and the IHSAA 3A Academic championship.

Seniors Lyla Maxwell (4) and Maddy Dunn (23) were ready for an intense match against Timberlake on Saturday, Oct. 24.

But it wasn’t meant to be, as the Cutthroats (10-1) finished the 2020 season winning the consolation round and finished in fourth place.

The Cutthroats 1-0 overtime loss to the Sugar-Salem Diggers in Thursday’s opening round of the state tournament was all that separated SVCS from getting to the championship game.

“We dominated the game, but couldn’t put the ball in the net,” SVCS head coach Kelly Feldman said.

SVCS had two goals that went wide and one that hit the goalpost, but the Cutthroats couldn’t punch anything in against the Diggers (16-3).

Sugar-Salem’s Ellie Puzey hit the game-winner with the assist from Sunny Bennion.

“That’s how it goes,” Feldman said. “It was a bitter pill to swallow.”

With the loss, the Cutthroats had to pick themselves back up and battle through Timberlake (6-6-2) the next day, which they won 4-0.

That victory set up the fourth-place game between the Cutthroats and Teton (11-6-1), which they won 1-0.

“That is the biggest thing—to lose on the first day, then to get up the next day and move on,” Feldman said. “They were brilliant. They were right on it and came out firing.”

Estep was the lone goal-scorer for the Cutthroats’ win over Teton.

Feldman’s Players of the Game in the finale were Estep, Lilly Pogue, Gretel Huss, Lyla Maxwell and Logan Lindstrom.

Feldman said they had a spectacular three days, especially the last day.

Sugar-Salem narrowly defeated Marsh Valley in the semifinal game on penalty kicks (4-3) when the game went through overtime on a 1-1 game.

This is also CDA Charter’s sixth straight 3A state girls championship. Bizarre storms disrupted both the boys and girls 3A state tournament, which was held in Post Falls from Oct. 22-24.

The wet and gloppy snow threw a wrench in the spoke of the tournament.

“The snow changed how the ball rolled and packed in the cleats, it was a mess and a disaster,” Feldman said. “The only thing that would be truly 2020 is if they canceled the whole thing. If they couldn’t get the field in good condition, there was discussion in canceling.”

Thankfully, since the games were played on field turf at the Fields of Real Life, officials were able to clear off enough snow and continue the tournament.

With an odd year due to COVID-19 complications, the Cutthroats’ soccer season was bound to end in a way that might not make sense.

The Cutthroats finished with only one loss, but a fourth-place finish.

SVCS also had 23 goals-scored through the postseason while giving up only two goals allowed.

Between the district and state tournaments, Estep and Hansmeyer both led the team with six goals, and Minor had five goals.

“Christine has been a great producer all year and very consistent for us,” Feldman said. “Tatum Minor has blossomed this year and stepped up. She really turned it on and we are excited for next year.”

Despite the fourth-place finish in 2020, the Cutthroats did finish tops in the classroom for its combined grade point average. The Cutthroats claimed the IHSAA 3A Academic state championship with a combined 3.83 GPA.