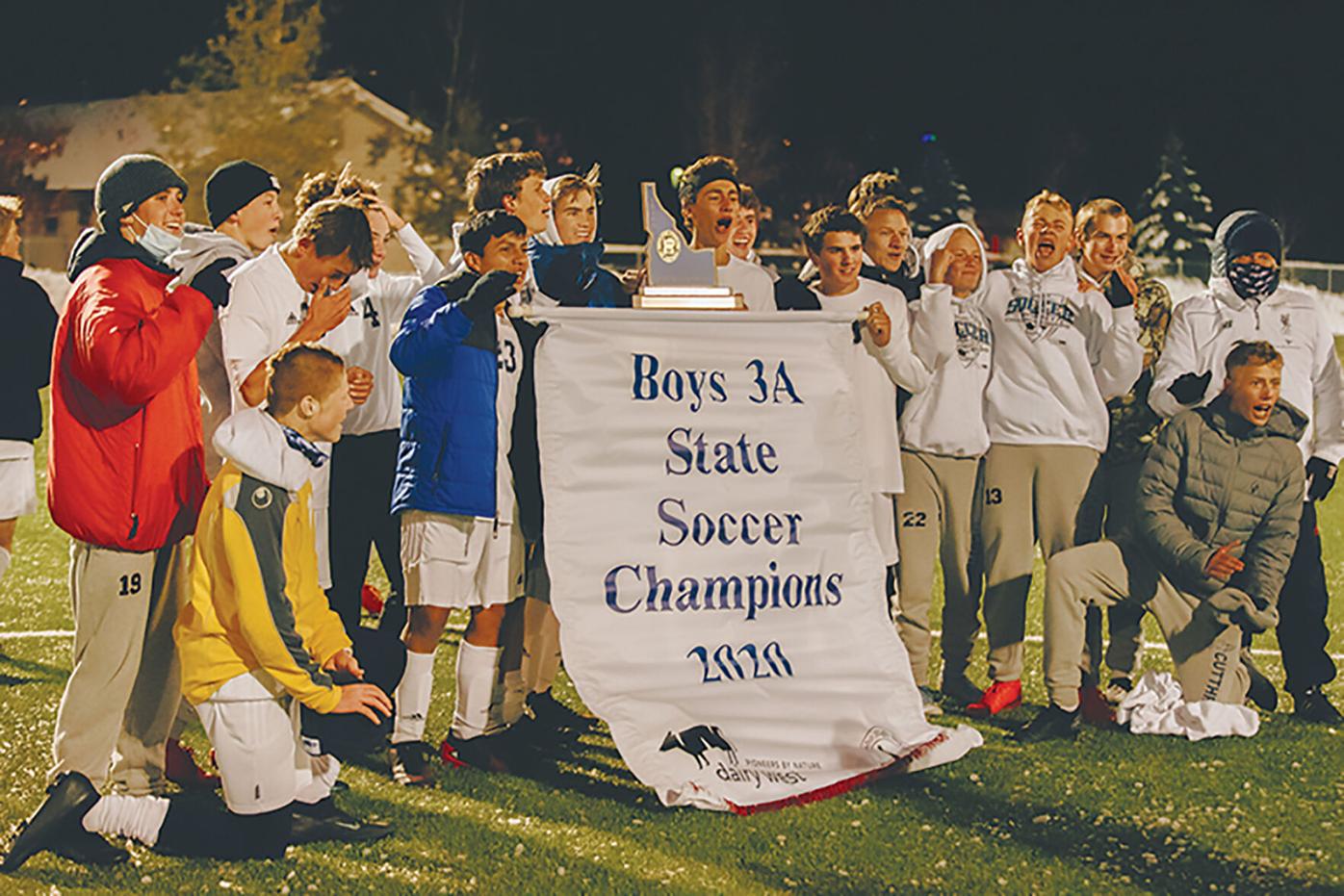 The 2020 Sun Valley Community School Cutthroat boys soccer team had quite the road to travel on their way to their third straight IHSAA 3A soccer championship. 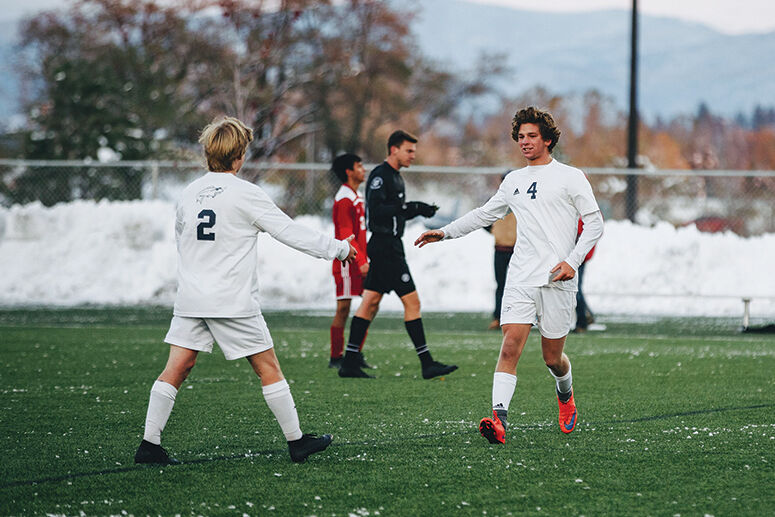 Senior Toby Rafford (2) and fellow senior Willie DeWolfe (4) congratulate each other for the team’s performance. 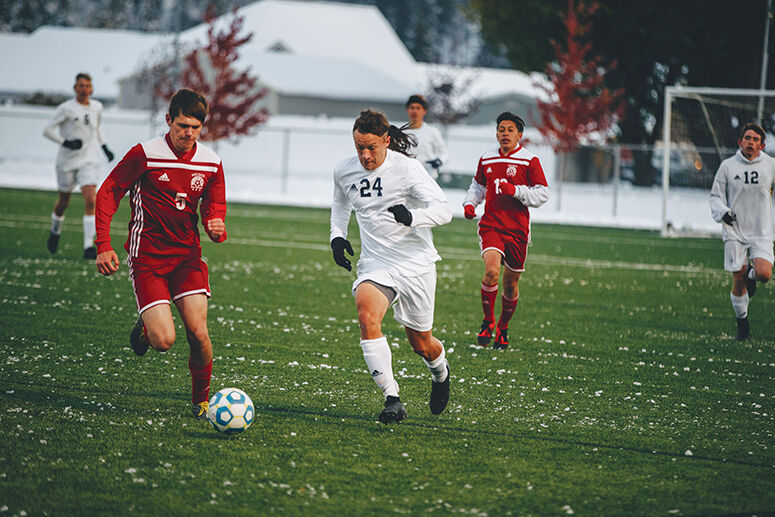 Sophomore midfielder Nils Galloway pushes the ball against Weiser in the final match.

The 2020 Sun Valley Community School Cutthroat boys soccer team had quite the road to travel on their way to their third straight IHSAA 3A soccer championship.

Senior Toby Rafford (2) and fellow senior Willie DeWolfe (4) congratulate each other for the team’s performance.

Sophomore midfielder Nils Galloway pushes the ball against Weiser in the final match.

That was the case for the Sun Valley Community School boys soccer team as the Cutthroats battled brutal weather and played two games in one day on their way to their third consecutive 3A state title.

“It’s been a challenging and long season,” SVCS head coach Richard Whitelaw said. “It all came together and we were superb.”

It was quite the day on Saturday, but these road warriors were not to be denied.

As extremely brisk temperatures came down from the north, SVCS dominated the Weiser Wolverines for the Idaho High School Activities Association 3A boys state soccer title by way of 2-0.

Senior Willie DeWolfe scored both goals for SVCS, which finished the season with a 9-3 record.

The day began with a narrow 1-0 overtime victory against Coeur d’Alene Charter Academy in the semifinals, and ended in a convincing performance over Weiser in the championship game, which all happened on the same afternoon.

The IHSAA 3A semifinal game against CDA Charter was originally scheduled for Friday, Oct. 23, at 4 p.m., but was postponed because of extreme wintry conditions.

Because of the postponement, the semifinals were moved to the morning of Saturday, Oct. 24, the same day as the championship game. Hence, the Cutthroats had their work cut out for them.

As the championship game began, temperatures were in the low 20s with a hazardous weather outlook that called for blustery north winds behind an Arctic front.

What seemed to be the icing on the cake for a tumultuous 2020 season only meant that SVCS had yet another obstacle to get through.

Whitelaw’s squad managed to keep warm and the momentum high in the championship game by rushing out to a 2-0 lead in the first half, and the defense did the rest.

“We bundled up and the adrenaline was high—we didn’t have time to think about it,” Whitelaw said. “My players didn’t complain about it. We played better and we wore teams down. We took the initiative and dominated all the games.”

By ruling the epic day, the Cutthroats have a dynasty on their hands.

Throughout the postseason—district and state tournaments—SVCS scored 14 goals as a team while allowing only two goals in six games. Four of those games were shutouts.

Leading the way for the Cutthroats was DeWolfe, whose seven postseason goals were the best on the team.

“The legend of Willie DeWolfe grows,” Whitelaw said. “Willie was the epitome of this team. He defended, he scored and he was phenomenal. All of the boys fed off him and they saw how hard Willie was working.”

Whitelaw has developed one of those once-in-a-generation runs that stretched from 2018-2020 with three consecutive championships.

Along with the offensive brilliance of DeWolfe, senior midfielder Nils Huss gave a great amount of gusto.

Senior Kai Nelson’s prowess was also splendid throughout the postseason.

There was sophomore goalkeeper Blake Currey who was a brick wall, and Alex Austin who delighted in defense.

For the entire 2020 campaign, the Cutthroats outscored their opponents 23-13.

The entire 2020 season was up in the air from the get-go due to COVID-19 complications.

For the first time ever, the Cutthroats didn’t play a single home game.

“Three weeks ago we weren’t sure if we would even compete, and to end up where we finished is truly remarkable,” Whitelaw said. “There was a lot of emotion. We are thankful to play and then to win it all—it makes it all worthwhile.”

In the 3A High-Desert District Tournament, the No. 2-seeded Cutthroats beat top-seeded Gooding, 1-0, to punch their ticket to state.

“American Falls was tough, we always have an epic match with them,” Whitelaw said.

Freshman forward Walker Pate and DeWolfe were the goal-scorers.

In the semifinal game against CDA Charter, DeWolfe kept the dream alive for the Cutthroats when he scored the winning goal in overtime. The game could’ve ended in regulation, but a header from outside midfielder Toby Rafford was called back with an offside call.

The Cutthroats beat the Wolverines 6-0 in 2019 for the second part of the three-peat.

That’s where the legend of Willie DeWolfe began. DeWolfe previously had never started a varsity game for the Cutthroats. Getting the call, he scored a hat-trick, which had never been done in SVCS boys soccer history.

For their first chapter in this championship story, SVCS beat the Bliss Bears 3-0 in 2018.

Weiser is no stranger to the championship game, either. The Wolverines have played in the title game in the last four of six years.