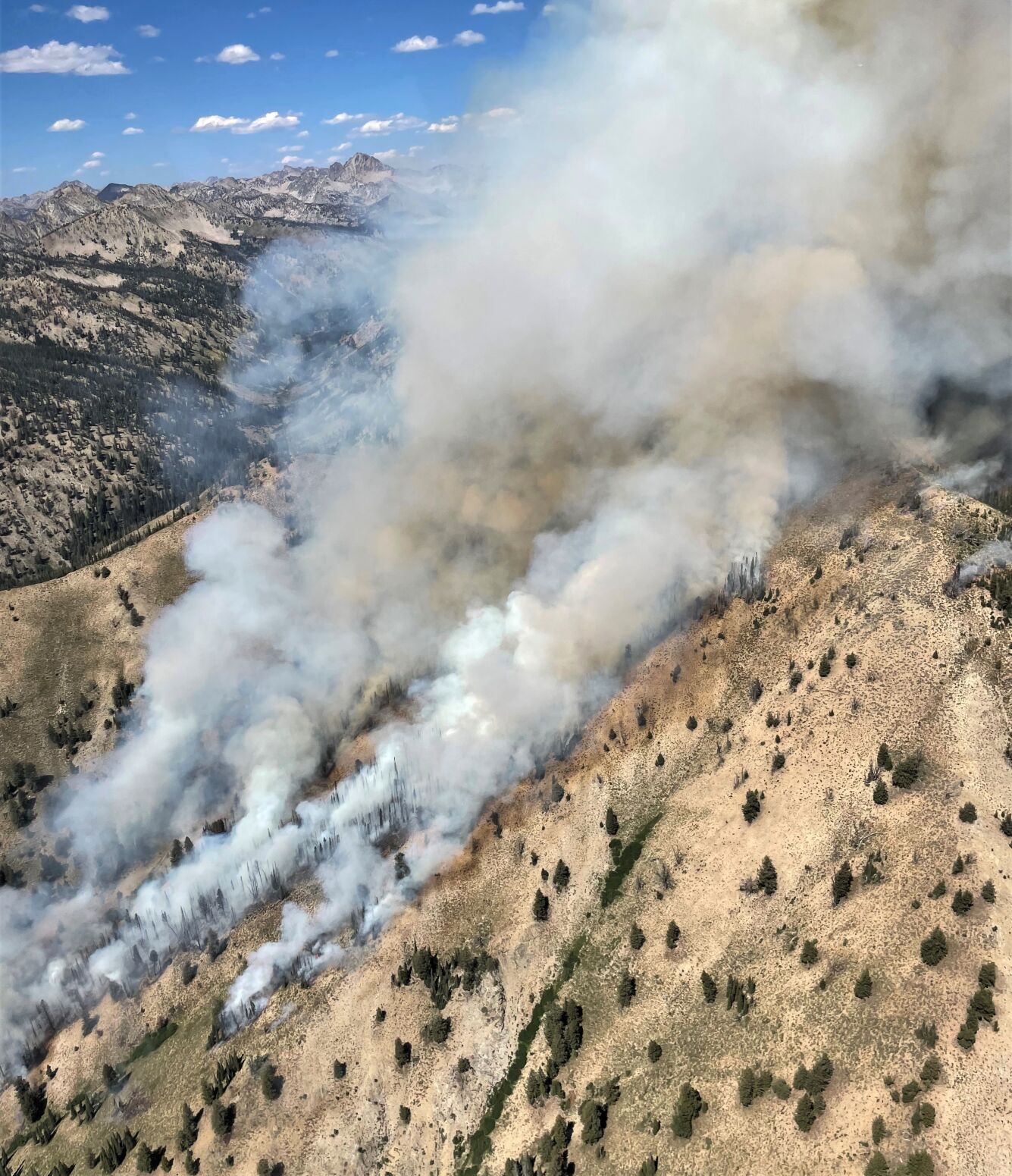 Plumes of smoke from the Ross Fork Fire could be seen Sunday afternoon from Galena Summit and Alturas Lake. 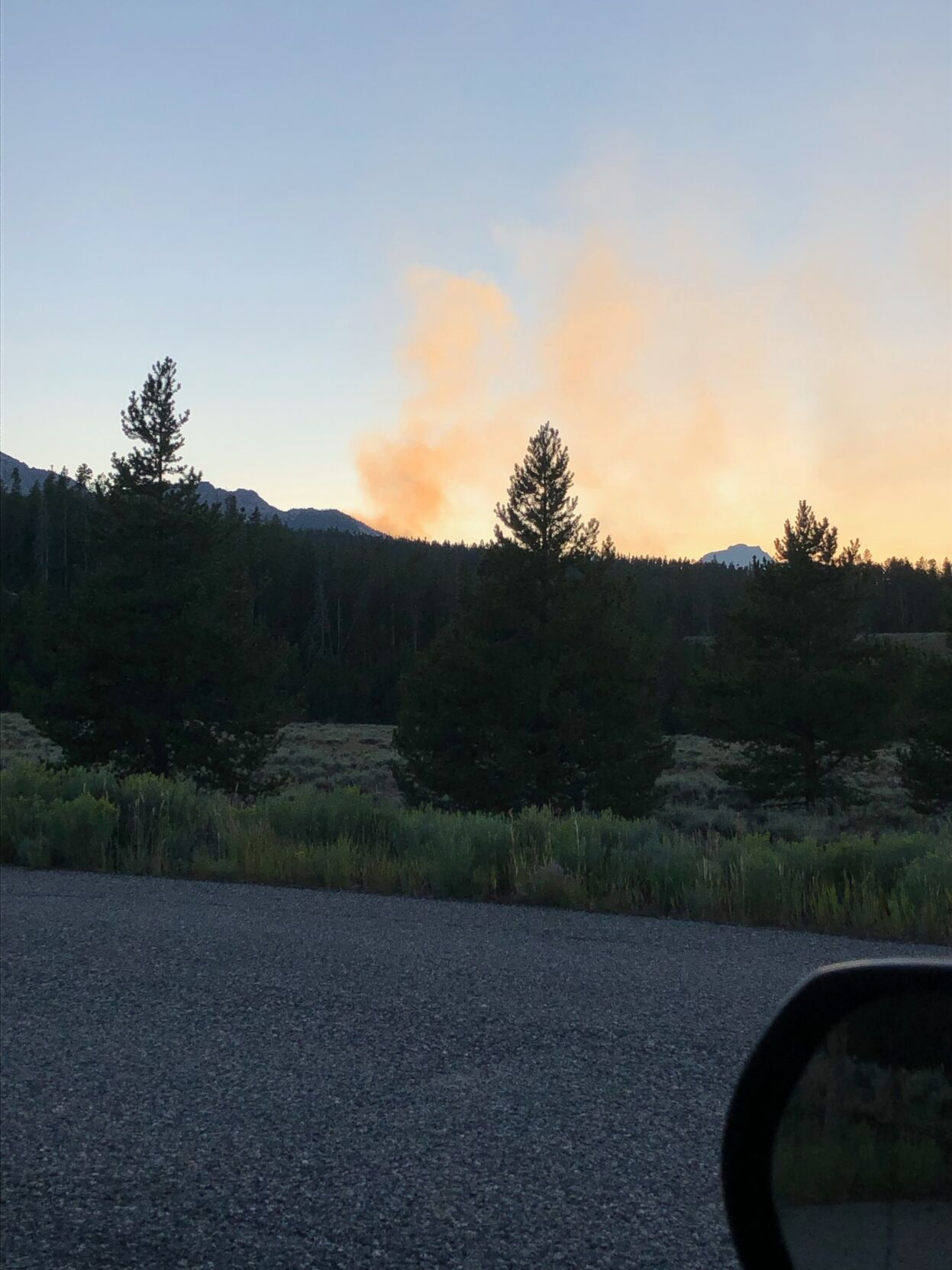 Smoke from the Alpine Lake Fire was visible from Stanley on Monday, Aug. 15.

A naturally ignited wildfire burning about 8 miles southwest of Alturas Lake had grown to around 320 acres as of Tuesday afternoon, according to the federal Great Basin Coordination Center.

The Ross Fork Fire was first detected by satellite around 2:30 p.m. Sunday. It is now burning through subalpine fir stands near the confluence of the Main Ross Fork, North Fork Ross Fork and South Fork Ross Fork, the Sawtooth National Forest reported Tuesday.

Lightning is suspected to be the cause, the Forest Service said. Six smokejumpers are currently assigned to the incident.

By Tuesday, the six smokejumpers had contained 5% of the fire perimeter and were dealing with westerly winds that were pushing the fire toward the confluence of the Gold Run drainage, the Forest Service said.

The incident is separate from the 6,400-acre Ross Fork grass fire near Pocatello, which prompted evacuations from the Fort Hall Reservation last week.

A second wildfire was detected around 5:30 p.m. Sunday near Alpine Lake, about 6 miles southwest of Stanley in the Sawtooth National Recreation Area, the Great Basin Coordination Center reported.

The center mapped the fire at 44 acres Tuesday afternoon.

According to the Sawtooth National Forest, the Alpine Lake Fire is also burning in subalpine fir stands. Though smaller than the Ross Fork Fire, it has prompted a greater response due to its proximity to Stanley and several well-trafficked trails.

The cause of the fire is currently unknown.

“We are concerned about firefighter safety due to the steep and rugged terrain,” the Forest Service stated. “Please stay away.” The Forest Service said it expects “heavy fire traffic” called to the area in response to the Alpine Lake Fire , and warned visitors of the potential for the fire to spread.

Two hotshot crews of around 20 firefighters each and a Chinook-type “Type 1” helicopter—the largest of helicopters used for fighting wildfires in the U.S.—have been ordered for the Alpine Lake Fire, the Forest Service said.

A “Type 1” helicopter has the capacity to carry up to 3,000 gallons and 15 or more passengers.

A crew of about 10-20 firefighters and a smaller “Type 3” helicopter were on scene Tuesday “focusing on the east flank of the fire with helicopter bucket drops and setting up hose lays along the perimeter of the fire,” the Forest Service reported.

Meanwhile, about 1,000 firefighters continue to fight the Moose Fire near Salmon, which continues to grow to the west and south and send smoke into the central mountains.

As of Tuesday, crews had contained about 34% of the fire perimeter, mostly on the north side, and had made headway on the “Diamond Containment Line,” a defensive perimeter protecting the Salmon municipal area from the active eastern flank of the fire. The line continues to be reinforced by clearing out pine stands and expanding old logging roads, according to the Forest Service.

The fire is expected to exhibit “moderate” activity this week as temperatures climb above 90 degrees, fire officials reported on federal incident site InciWeb.

• The 1,100-acre Wolf Fang Fire, which ignited via lightning strike on July 13, is burning about 4 miles northeast of the confluence of Big Creek and the Middle Fork of the Salmon River in the Frank Church River of No Return Wilderness. Fire officials said Monday that it is exhibiting “minimal” spread.

• The 470-acre Norton Fire, ignited on Aug. 1 by lightning, is burning about 7 miles northwest of the Lower Loon airstrip in the Frank Church Wilderness. It is also exhibiting “minimal” activity.

• The 7-acre Pete’s Fire, ignited by lightning on Aug. 14, is burning on the Salmon-Cobalt Ranger District and has required air attack by helicopter, single-engine air tankers and large air tankers.

• The 3-acre Pretty Fire, ignited by lightning on Aug. 13, is located about 1.5 miles southeast of the confluence of Panther Creek and the Main Salmon River near the Moose Fire perimeter. It has been successfully contained and controlled, according to InciWeb.  

"Stanley residents and visitors may see fire and smoke.”