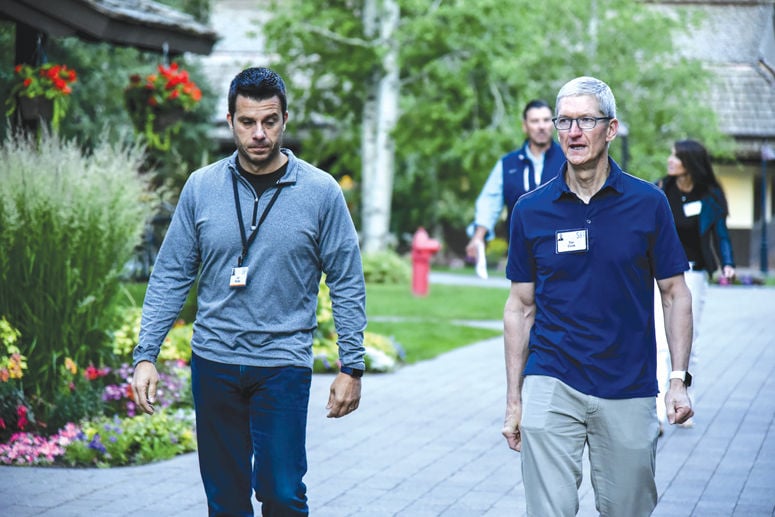 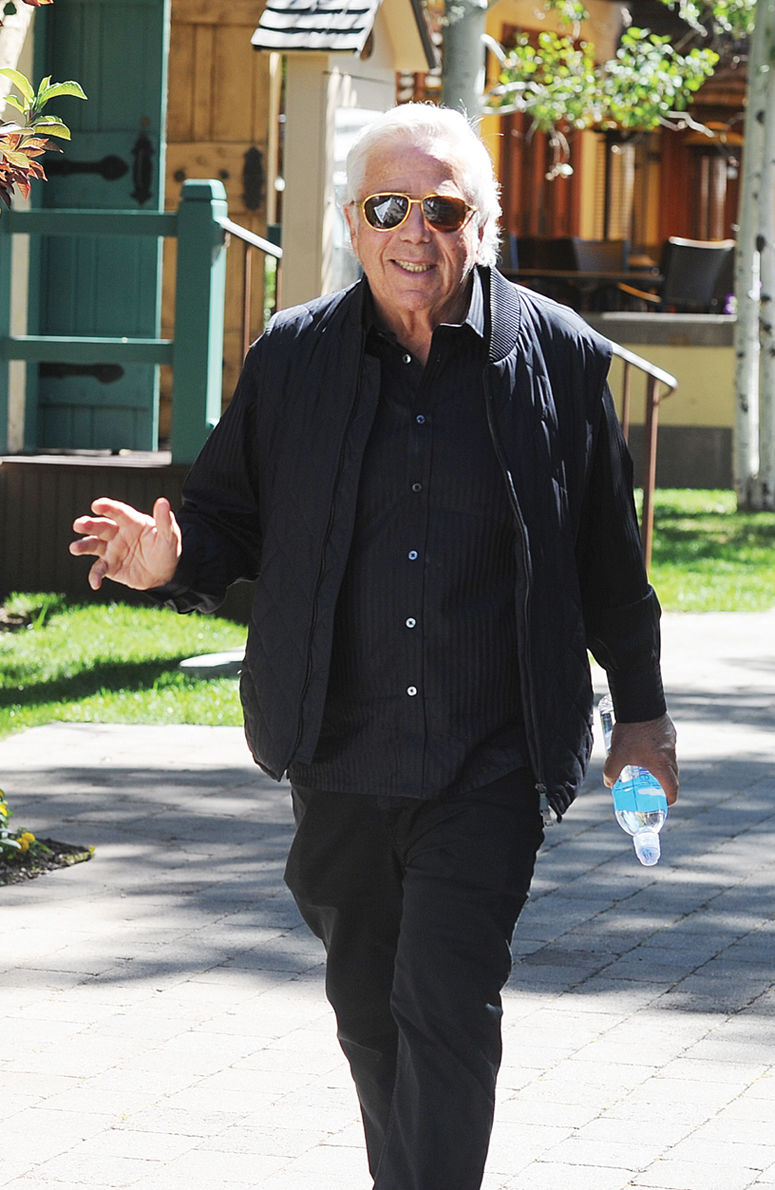 Expect the telltale giveaways to continue through the weekend and into next week, as a select cadre of the world’s richest and most powerful converge on the Wood River Valley for the hush-hush affair, slated to start Wednesday.

Though guests rarely say what happens in the Limelight Room of the Sun Valley Inn, the Allen & Co. effect ripples countywide. For many residents, the week of work, ranging from babysitting to catering to guiding gigs, has become a welcome rite of July, complete with boosted wages and, often, a fat tip.

The conference, like the company itself, is secretive. Allen & Co., a private Fifth Avenue investment bank, doesn’t have a website. It counts George Tenet, the former head of the CIA, among its employees. Organizers and staff are contractually bound to silence. The schedule, as always, stays under lock and key. Presentations and panels cover a wide range of topics, but have focused on politics and on the technology, media and telecommunications sector—the bank’s specialty.

Still, much of the real business happens outside the classroom, yielding very big and eventually very public results. Time Warner’s doomed merger with AOL is rumored to have grown from the meeting. So was the $250 million purchase of The Washington Post by Amazon founder Jeff Bezos, the richest man in the world. Last year, Bezos’ top competition for that title shared the same room, as four of Money magazine’s five richest people on the planet came to the conference: Bezos, Bill Gates, Warren Buffett and Mark Zuckerberg.

Every year, the guest list stays tightly guarded, and the 2018 invitees are no different. In early June, Bloomberg and Variety claimed to have a copy in-hand, which included some of media’s biggest and most controversial players.

These days, Charlie Rose counts in the second camp. A longtime television journalist and celebrated interviewer, Rose is a regular at Allen & Co., known for hosting Q&As with its most powerful attendees.

Now, felled by the #MeToo movement and, it seems, his own behavior, Rose is out of a job: In November, a Washington Post investigation found that Rose had allegedly sexually harassed eight women in the workplace. He was fired from CBS, PBS and Bloomberg the next day. Since then, the accusations have widened: The Post continued its investigation and, in May, published a report that identified 27 women who said they were sexually harassed by Rose, as recently as April 2017.

So his invitation to the 2018 event comes with some surprise—as well as the possibility for ignominious photo-ops and awkward interactions with his fellow guests.

Not if his invitation is any indication. But maybe Harvey Weinstein does. Embroiled in a broader cloud of sexual misconduct, the disgraced film producer was reportedly left off this year’s list. Earlier this week, a New York grand jury heaped another set of charges for sex crimes on Weinstein, who has already pleaded not guilty to counts of rape and forcible sexual acts against two women.

Then there’s Jerry Richardson, until recently the owner of the NFL’s Carolina Panthers, and another 2018 invitee, per the initial reports. A December Sports Illustrated investigation found that “at least” four former employees received confidential payouts to stay silent on Richardson’s workplace misconduct, which included sexual harassment and the use of a racial slur.

Under pressure from the league, he sold the Panthers in May for a record $2.2 billion.

NBC’s Tom Brokaw was also invited back, despite sexual harassment allegations against him. Brokaw, who hosted the “Nightly News” for 22 years, has denied wrongdoing.

Or try to ask them, and get used to Allen & Co.’s de-facto motto: “We have no comments on the conference,” said Sun Valley Resort spokeswoman Kelli Lusk.

That message has been the same for 35 years: Everybody’s here, and nobody’s talking.

Friedman Memorial Airport Manager Chris Pomeroy expects flight traffic next week to be similar to the 2017 edition, with East Coast flights touching down around noon Tuesday, landing everything from Pilatus turbo-props to G6s on their 100-foot wings.

Get in early or be prepared to circle the block: It’ll only take six or seven hours for parking spots to fill up, Pomeroy said. Late arrivals drop off and dash—to Twin Falls, Boise, Pocatello, anywhere with space. When the weekend comes, they’ll all turn around, and head the other way.

“It’s a captive audience,” Pomeroy said. “The organizers know who they’re going to get—the same people come back, year after year. And based on what they’re telling me, it’s going to be a busy week.”

President Abraham Lincoln, on Nov. 21, 1864, said "I see in the near future a crisis approaching that unnerves me and causes me to tremble for the safety of my country...corporations have been enthroned and an era of corruption in high places will follow, and the money power of the country will endeavor to prolong its reign by working upon prejudices of the people until all wealth is aggregated in a few hands and the Republic is destroyed."

Insertfoot, I am not sure how much it enriches Ketchum. Aside from renting out a few restaurants that would be busy anyway this time of year, they are pretty much sequestered up in Sun Valley.
Sure some locals make some quick cash they can trickle over the valley, but for most businesses in Ketchum the direct benefits are negligible.

You're not sure? One of the biggest events that the Valley touts, and city funds are provided to Visit Sun Valley (not exclusive to SV) and to SVED (not exclusive to SV), among others, and you don't know how much it benefits Ketchum? And Ketchum is providing funding, why? If I'm wrong on that, I apologize.

"Hear that hush?" That's the private aircraft ripping open the sky above Hailey and Bellevue to deliver the parasites back home.

Can we get the grass cut on the sides of the roads, it is taller then the deer.

Time to worship the 1%, and a hush, give me a break all the south valley hears is constant jet noise. Each jet with only a couple of passengers.

Anyone notice their cellphones not working very well these past couple of days? Same thing happened last year at this time. There's not enough towers to handle the massive increase in call volume this week.

The Weinstein express is coming to town,why no headline story about this?

Have they trickled on us yet?

I do see that the Silver Cr Hotel in Bellevue is rather full based on parking lot volume. Not sure about the other businesses.

It enriches me nothing more. I have a full time job, and it only impacts me adversely. More traffic, more jet noise and pollution. If it provides a boost you, congrats; I mean that sincerely. But it doesn't benefit everyone. I always leave the valley this weekend, with the constant jet takeoffs and landings.

Oh good. Looking forward to the back-to-back landings and takeoffs, jet exhaust washing over the dirty masses in Bellevue. As long as it enriches Ketchum, all is good.