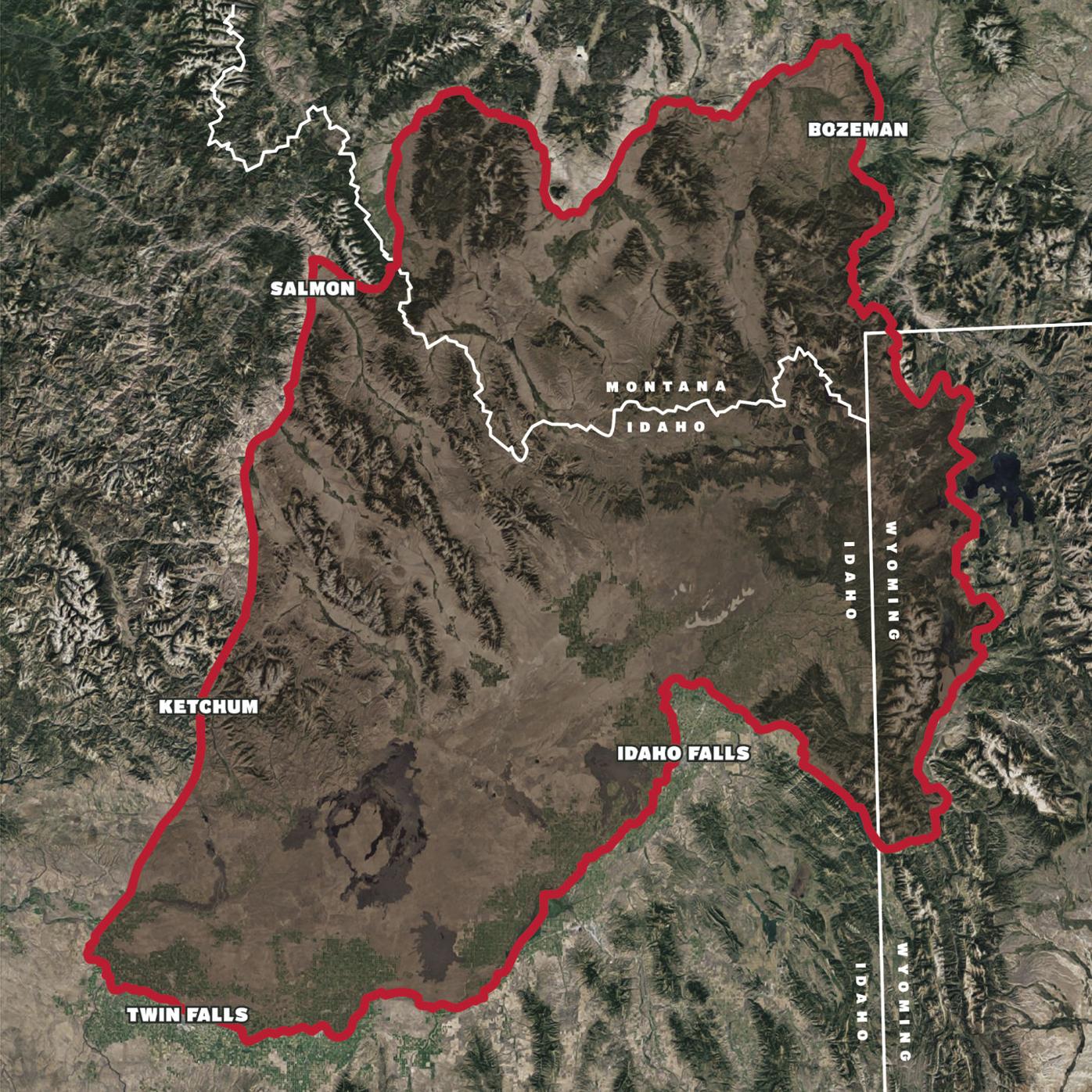 A newly drawn territorial map based on an 1870 cession document shows that much of the Wood River Valley was once claimed by the Mixed Band of Shoshone, Bannock and Sheepeater Indians, otherwise known as the Lemhi Shoshone. 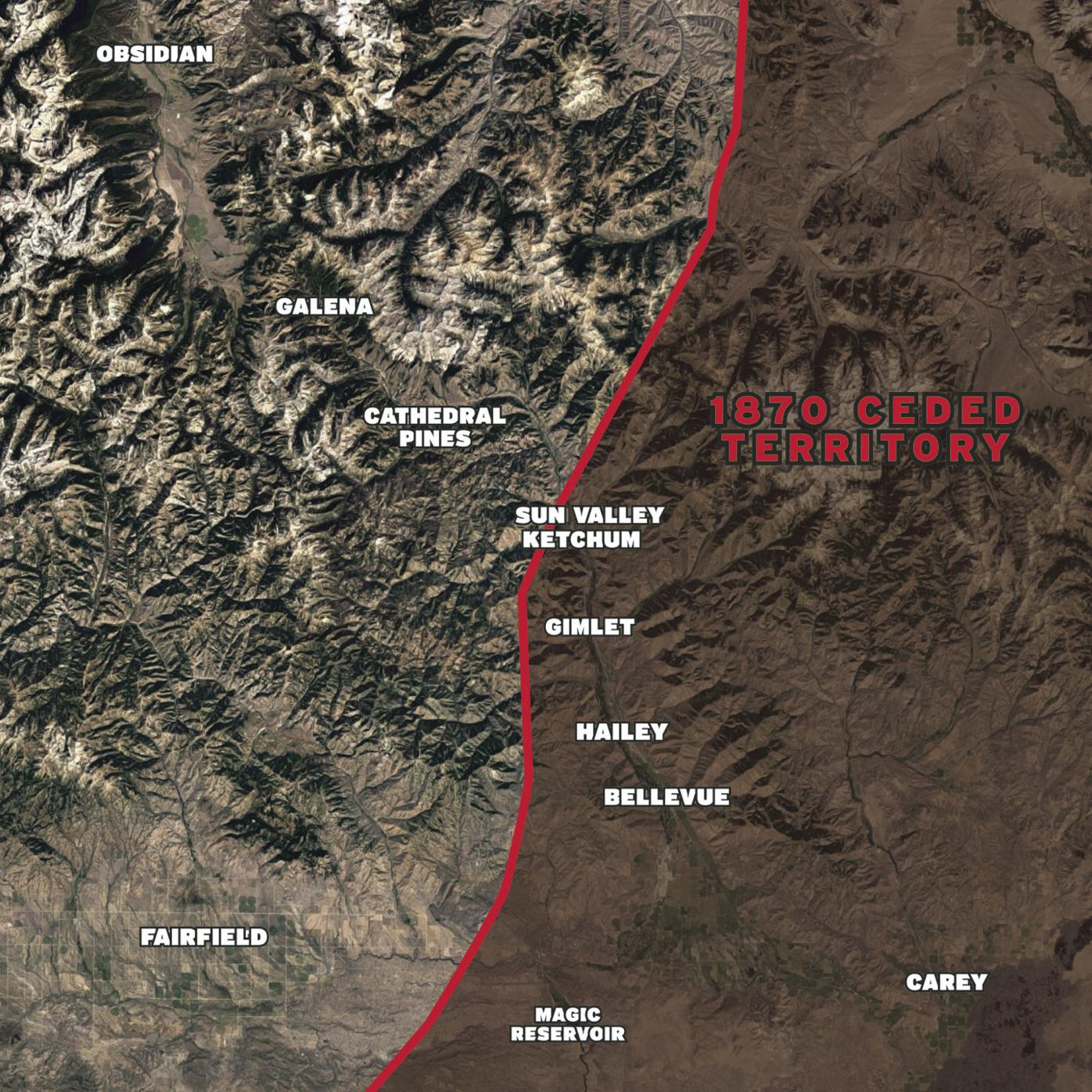 A recently discovered document shows that the Lemhi Shoshone ceded far more territory than once understood, for a reservation that was taken away in 1907. 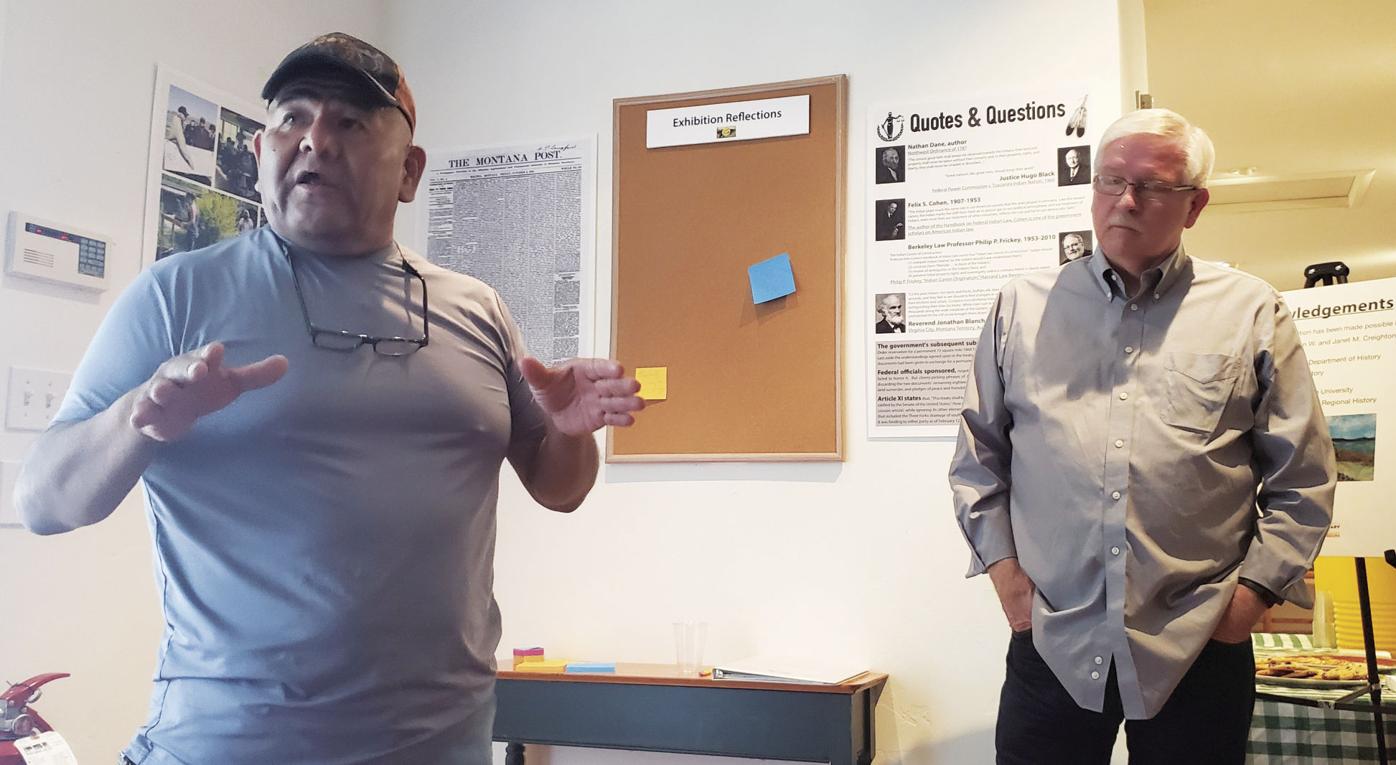 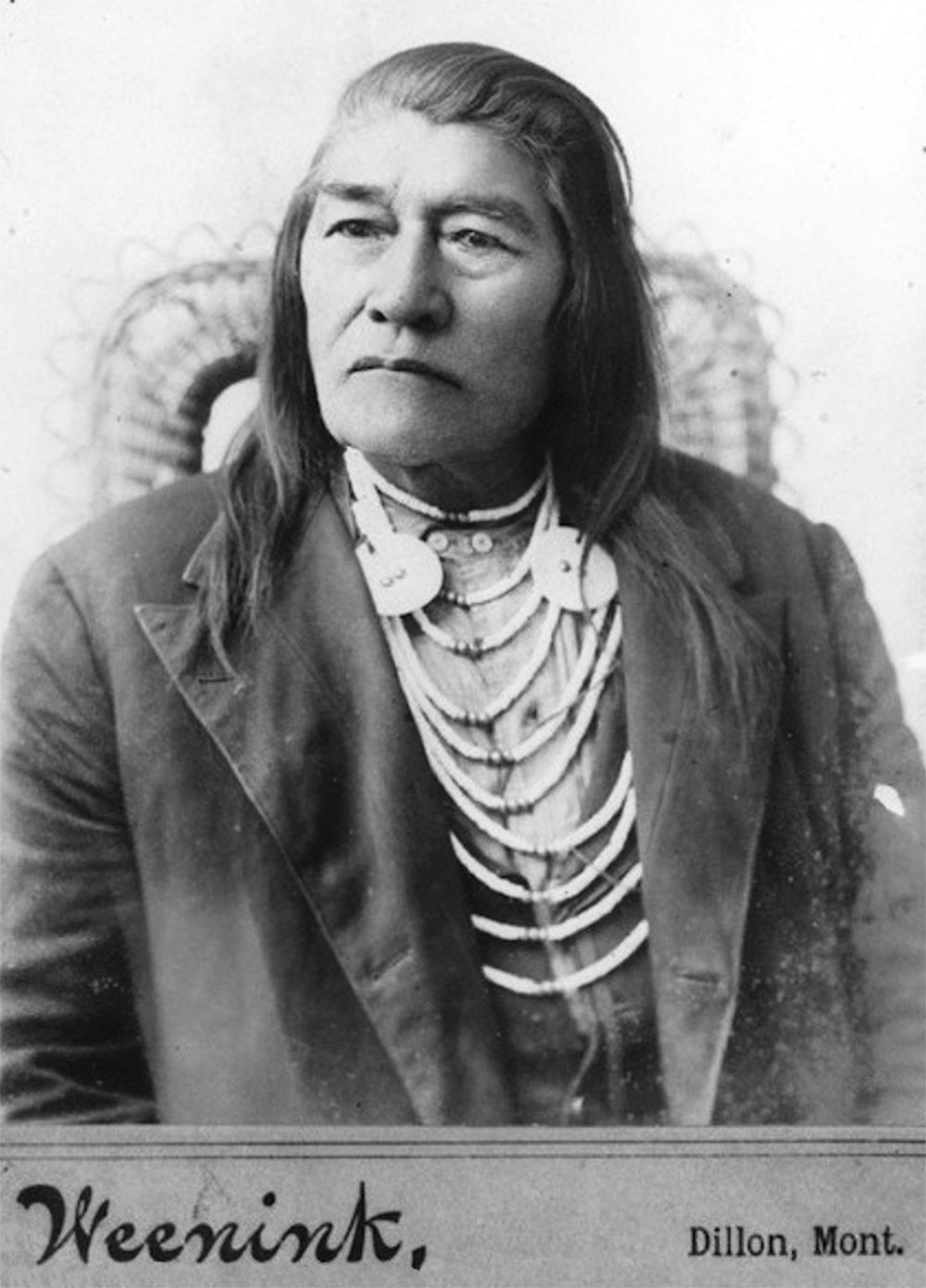 Chief Tendoy and 500 of his people were marched about 200 miles from Salmon, Idaho, to the Fort Hall Reservation in 1907. Some died along the way.

In 1907, some 500 members of the Mixed Band of Shoshone, Bannock and Sheepeater Indians were forced to march more than 200 miles from their homes near Salmon, Idaho, to the Fort Hall Shoshone-Bannock Reservation near Pocatello. Some died along the way.

The survivors of Chief Tendoy’s Mixed Band (formerly known as the Lemhi Shoshoni) found themselves struggling to retain their distinctive culture among unfamiliar people at Fort Hall, far from their ancestral territory at the upper reaches of the Salmon River.

Until recently, this final displacement of the Mixed Band, the group that gave birth to Sacajawea, was thought to be the last chapter in a long history of land grabs and betrayals at the hands of the federal government.

But the recent discovery of a historical document in the National Archives shows that territory slated for cession to the Mixed Band in 1870 was far larger than once assumed and included the lower Wood River Valley, including land under the present-day towns of Ketchum, Sun Valley, Hailey and Bellevue.

Leo Arriwite, a leading member of the Agai’Dika-Shoshone (Salmon-eater) band of the Mixed Band visited Ketchum for Wagon Days, providing cultural events in the Festival Meadow with his relatives and friends. Speaking at the Regional History Museum in Ketchum, he said members of his family came through the Wood River Valley in the 1930s and in the years that followed, but always kept a low profile.

“My grandmother always told me I should stay invisible around here until I was ready,” Arriwite said.

Thanks in part to the discovery of a treaty “cession document” by graduate student Lynnette Scriver in 2007, the time appears to be right for Arriwite and his family and friends to once again publicly celebrate their ancestral ties to the Wood River Valley.

The Mixed Band (or Lemhi Shoshone) had been restricted to a 100-square-mile reservation near Salmon from 1875 to 1907. A treaty signed at Virginia City, Mont., in 1868 to preserve the reservation in perpetuity was never ratified by Congress.

In 1870, the recently discovered cession document was written and signed by all concerned parties. It indicates that the Mixed Band once were entitled to claim territory stretching over 31,871 square miles in three states, with 10,072 square miles in southwest Montana, 2,318 square miles in northwest Wyoming and 19,480 square miles in Idaho.

Washington State University Professor Orlan Svingen, with the help of Arriwite and others, converted the written descriptions contained in the document into a map of the ceded territory. It extends south from the Three Forks of the Missouri River, where the Lewis and Clark Corps of Discovery first encountered the Mixed Band, including relatives to their native guide Sacajawea. The map includes a portion of what would become Yellowstone National Park in Wyoming, as well as a vast section of the Magic Valley, the Bellevue Triangle and Craters of the Moon National Monument.

A traveling exhibition of the historical findings, as well as cultural artifacts and in-formation relating to past relations between the Mixed Band and the U.S. government, will be on display at the Regional History Museum in Ketchum through Oct. 26.

The exhibit includes the story of a dispossessed people who agreed to exchange their once vast territory and a 100-square-mile “executive order” reservation for a permanent 72-square-mile “treaty reservation,” but were betrayed when their reservation was abolished in 1907 by presidential decree, leading to what has been called the Lemhi Shoshone Trail of Tears.

In documents sent to the Idaho Mountain Express, Svingen states that the reversal of federal policy toward the Mixed Band was never brought to Chief Tendoy’s attention and amounts to a breach of the “good faith principle,” written into the 1868 treaty because it cast aside the understandings agreed upon in the treaty and cession documents.

A documentary film titled “In Good Faith,” about the treaty, deception and plight of the Mixed Band, is being screened at the museum during hours of operation.

“They [the Mixed Band] have a dead-to-rights claim for huge acreage in Montana and Wyoming.”

Svingen said in an interview that he was “flabbergasted” by the discovery of the cession document and its implications, and surprised that it was not identified earlier. He said an Indian Claims Commission, established in 1946 to settle outstanding claims for land or compensation for tribes in the United States, overlooked the document, compensating the Mixed Band only $4.5 million for a much smaller territory than was proper. The money went into the general fund at Fort Hall Reservation, rather than to the Mixed Band individuals, Svingen said.

Svingen said he believes the settlement of land compensation for the Mixed Band has been finalized in Idaho, but outstanding considerations for compensation from elsewhere could remain, depending upon the goals and actions of the Fort Hall Reservation Business Council.

“They [the Mixed Band] have a dead-to-rights claim for huge acreage in Montana and Wyoming,” Svingen said. “Although some people consider the issue to be settled law, a layperson would say that stolen property is stolen property forever.”

Arriwite told stories at the museum over Wagon Days weekend and thanked the Wood River Valley community for welcoming back his people to the land they have always called home.

“I am not invisible anymore,” he said. “Next year, we hope to have a bigger powwow and invite people here to participate in games with us. Our people are fun people. We enjoy life.”

“My grandmother always told me I should stay invisible around here until I was ready.”

I thought that was a nice touch of your graphics department to add the seldom referred to 'Obsidian' town to the interpreted Indigenous lands map.

Its a good start for the Native Americans. After all “manifest destiny” raped these people of their land and way of life. Lol ask the indians how they feel about illegal immigrants!

Happy to hear this. Sure could use a big casino where the airport is located.

Turn the land over the rightful owners the Native Americans and build a few casinos. That is is a sure way to bump up the visitor numbers.