The “Spruce & River Workforce Housing” project would span several lots across the street from Silver River Residences on the edge of Hailey's business district. 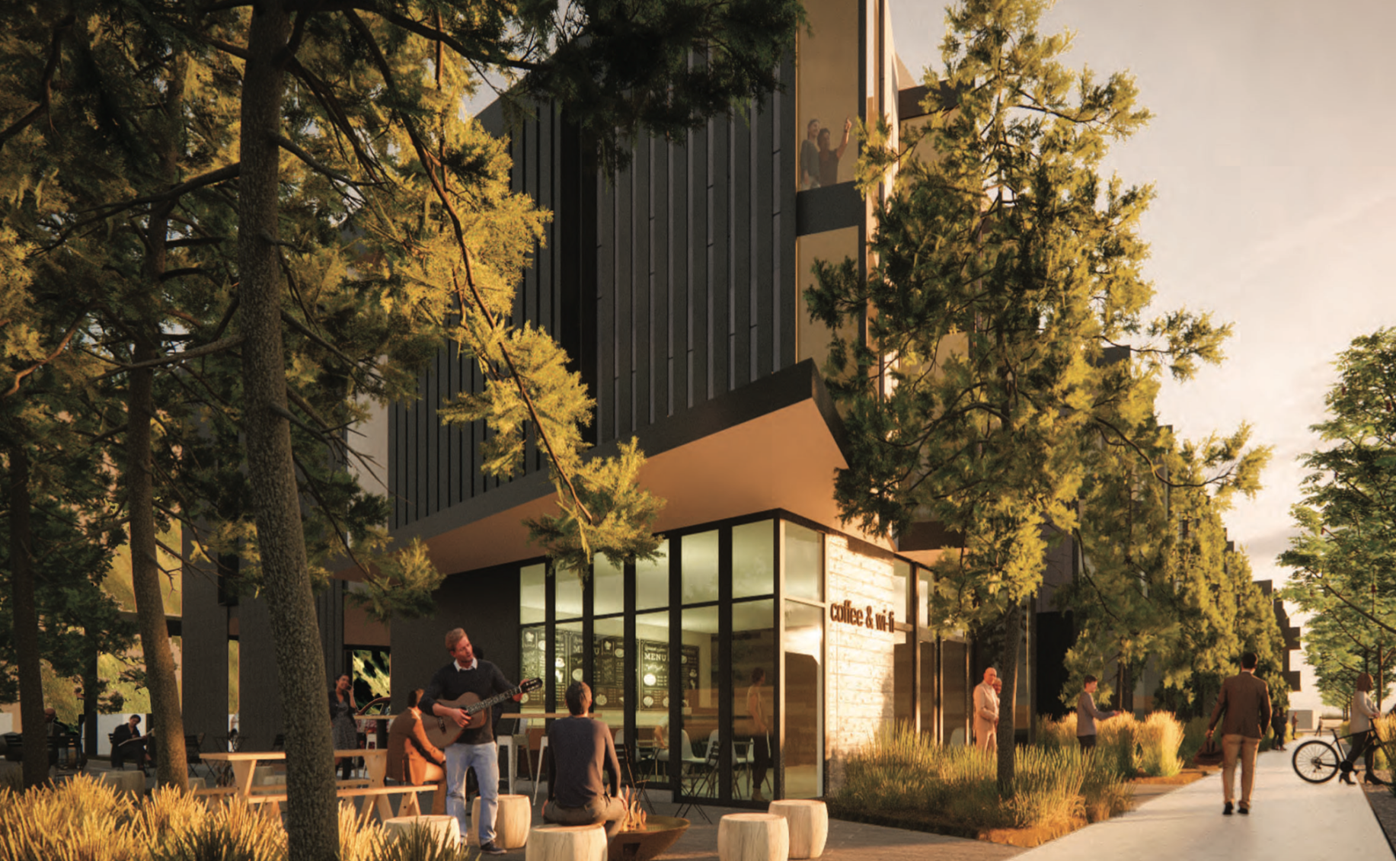 A 500-square-foot coffee shop and outdoor patio is planned at the corner of Silver and River streets, according to project representative Mark Sindell. The patio would lead into a main lobby and central stairway.

Design plans for a 51-unit apartment project earned mostly favorable reviews from the Hailey Planning & Zoning Commission on Monday night while raising some questions about pricing and affordability for year-round residents.

Ketchum-based developers Trent and Elisabeth Grabher are hoping to construct a three-story multifamily building at 403 to 419 North River Street with 43 one-bedroom apartments and eight two-bedroom apartments for a total of 51 residential units.

The Grabhers’ project—currently dubbed “Spruce & River Workforce Housing”—would span the entire block from Silver Street to Spruce Street. It would sit across the street from the 16-unit Silver River Apartments project and the forthcoming 12-unit River Street Townhomes development.

The site plan calls for a total of 76 parking spots, 51 of which would be located under a carport that residents could access from the alley between Silver and Spruce streets. An additional 25 angled parking spaces would serve guests on North River Street.

According to a presentation by project architect Jonathan Hall and landscape architect Mark Sindell, both of Boise-based GGLO Design, the structure would stand 35.5 feet tall—about the same height as Silver River—and would be split into two masses.

Sindell said the main building would run parallel to River Street for about 130 feet and the other would run perpendicular along Spruce Street. A “transparent” walkway with long windows would connect both sections, he said.

“I won’t lecture you about your own town, but … when you look block by block, this is just about the best location."

Floor plans presented by Hall showed that one-bedroom units would range from 600 to 630 square feet and two-bedroom units between 880 and 1,030 square feet. Ground-level units facing River Street would have individual walkways and rear access to the carport, he said.

Sindell noted that a 500-square-foot retail space, “probably a coffee shop,” is planned for the southern corner of the building where Silver and River streets intersect. There, a retail patio would feature “parklet” outdoor seating with gas fire pits, a bar top and native conifers. A nearby play area would entertain kids with logs and other “natural” materials, he said.

Hall said the retail patio would lead into a lobby with a mailroom, elevator and a central stairway going up to a top-floor lounge facing Carbonate Mountain.

“I won’t lecture you about your own town, but … when you look block by block, this is just about the best location,” Sindell told the P&Z. “You’re able to walk to Draper or Carbonate, or turn around and walk to Tundra or Powerhouse. From a livability standpoint, that’s as good as it gets.”

As for lighting, he said the design team used software to model a natural light progression throughout the day and tweaked window angles based on those results. Renderings presented on Monday also showed ground-lit aspen trees at night.

Sindell added that the development would have about 4,000 square feet of open space that would double as snow storage in the winter months. The carport roof could also double as a planted seasonal garden depending on construction cost, he said.

The former trailer homes on the property have been demolished, according to City Administrator Lisa Horowitz.

North River Street has been a focal point for more affordable housing since 2018, when the Hailey City Council created the Downtown Residential Overlay district, or “DRO,” to encourage high-density development.

The zoning, which spans along Main Street from Albertsons to the post office, allows up to 50 housing units per building and units as small as 200 square feet each. The 400 block of North River Street, in particular, has seen a flurry of recent construction activity.

At 402 N. River is Silver River Apartments, a mostly two-bedroom development opened by local developers Kiki Tidwell and Gary Poole in June 2021. The development is listed on Sun Valley Company’s website as an“affordable” option for its employees, joining the likes of Ketchum’s Northwood Place and Hailey’s Balmoral and Blaine Manor Apartments.

At 410 N. River is River Street Townhomes, a 12-unit complex still being built by Boise-based developer Kevin Cablik. Two units in the development are capped at $375,000 each, affordable to those making 100% of area median income in Hailey as of 2021.

Sindell, a part-time valley resident, said that he and Hall had met with 18 neighbors on July 21 and received a “generally” enthusiastic response to the project.

“We care deeply about the valley and want this to be a project that is beloved by the folks who live in the community for the next 50-plus years,” Sindell said.

Commissioners commended the applicant team for meeting with neighbors but shared surprise about the size of the building. Commissioner Owen Scanlon remarked that he was “not sure that there were even pieces of ground big enough to do something like this.”

“I don’t think we had in mind [when approving the Downtown Residential Overlay in 2018] that we would see something of this magnitude, a project this ambitious,” he said.

P&Z Chair Janet Fugate and Scanlon both said they were impressed with the team’s polished presentation and found the plan “thoughtful” and “interesting.”

“Obviously you have a good track record and you probably have your finger on the pulse of what this is really going to cost. I like it—it’s an attractive building,” Scanlon told Sindell and Hall.

“It seems very discriminatory against families,” he said.

“Kids and families would love to be in this [location],” he said. “You have access to the movie theater and to the parks. If people have the chance to move up to two-bedroom units in this valley, this would be a good spot to do it.”

Smith, Fugate and Stone each requested air conditioning, which they agreed has become a necessity in Hailey.

“In smoke season people don’t want to open their windows,” Smith said. “It would be a real positive to allow them to [cool] the space without having to ventilate it at night.”

The three commissioners also united in their request to break up the building’s appearance.

“That is going to be one massive frontage that you’re presenting to people,” Smith said.

Stone described the River Street frontage as “highly redundant” and asked the applicants to consider what it would be like “walking down that sidewalk with a 35-foot building on either side of you.”

“Perhaps we could give it a little pop of color to break it up,” Fugate said.

Smith said he was happy to see the retail component, which he said would add to the sense of community and encourage more dining and shopping on River Street.

“I think that River Street is going to be an ideal location for boutique-type shopping in the future, given the amount of people that we’re going to be seeing concentrated in the area,” he said.

Smith and Stone also grilled the applicants about their plans to deed-restrict units, which Smith said was especially needed among the “local police, fire and medical community.”

“Obviously, these will be appealing to folks that want to have a place to hang their ski parkas and park their skis,” Smith said. “If we can have something that would actually support the core workforce in the community, as opposed to the more transient people that come up every few weekends … that would go a long ways.”

“Right now the only deed-restricted housing is basically resting on the shoulders of ARCH,” he said.

At Monday’s public-comment session, Hailey resident Bergen Palmer said the developers’ choice to include “workforce” in their project name was “misleading” because he and other neighbors were told at the July meeting that the plan was to charge market rate.

“As we speak, the current market rate is pretty unaffordable,” he said. “Over $1,000 for a single room.”

Palmer also expressed surprise and disappointment at the current pricing of the River Street Townhomes across the street, which he said were initially pitched as significantly cheaper.

(The three-bedroom townhome units are now selling between $749,000 and $829,000, according to the development’s website, which also promises “gourmet kitchens” and “room for your skis, bikes, and other toys.”)

“How are we supposed to believe that this product is actually going to be an affordable solution to our housing problem?” Palmer asked. “It’s clear this is not a cheap project.”

Hailey resident Kelsie Choma said she “really appreciated” the applicants’ efforts to integrate with the community and “loved” the coffee shop idea but worried about increased traffic as both a parent and former 911 dispatcher.

“If the city continues to make it a priority to increase housing [on River Street], they need to make it safe for pedestrians as well,” she said. “It’s really not safe right now. I’ve been almost hit several times [crossing] with my toddler, cars swerving around me.”

Choma also thought the on-street parking spots would cause too much congestion and strain city efforts to remove vehicles during snowplow operations.

“I imagine most of these people are going have at least two vehicles, potentially even a recreational vehicle,” she said.

Scanlon asked about the possibility of a traffic study.

“River Street is really a different experience than it was a year ago, far busier than it’s ever been,” he said.

Sindell did not discuss the price of the the end product Monday, but responded that the Grabhers were committed to serving the local workforce and “need to see how the numbers play out.” The couple is currently working with CSDI Construction to nail down construction material costs, he added.

“We wanted someone who knew the local resources and costs and are really trying to be measured about it,” he said. “This [development] will probably be closer to area median income than truly affordable. Details are to follow.”

The project will return to the P&Z for a full design review hearing and public comment on a Monday later this fall, though no date has been established.  

Hailey’s average household income is about $55,000 per year. Affordable housing costs are estimated at 30% of income. So, accounting for an 85% rate of income for taxes, fica, etc. the “affordable housing cost is about $1200 per month. At current loan rates of 5% (possibly more) and 20% down at $75k a $375k house costs nearly $2000 per month, or about 80% above the “affordable” moniker. Now, you can be somewhat creative, but. Who are we kidding? This is just another way for Hailey developers (of which there are waaaaay too many here) to make money. We simply do not have the resources to support the current growth contInuously. We don’t have the capacity in our water, sewage, parking or roads. Why don’t we get the infrastructure first if we really expect this development continue.