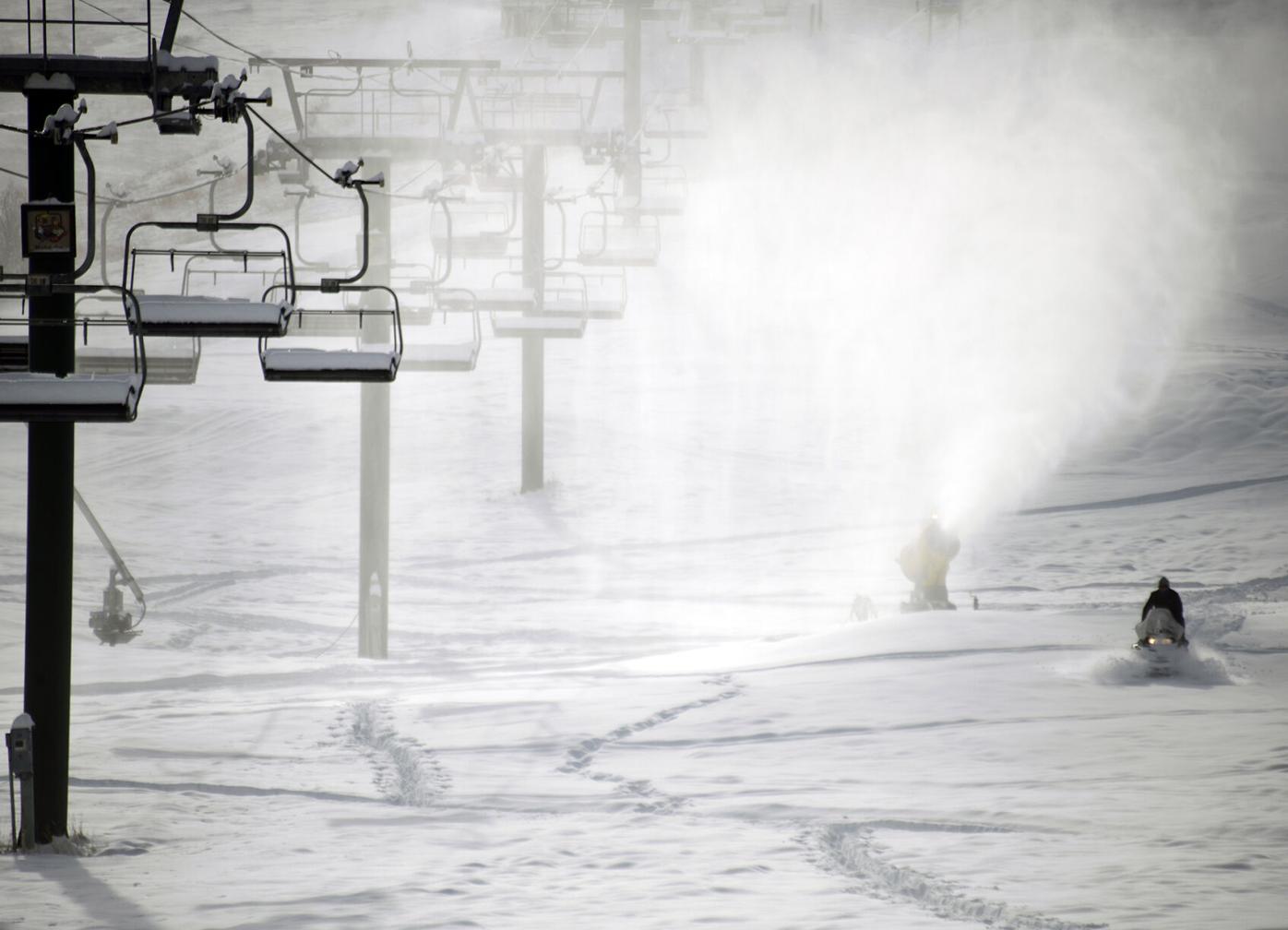 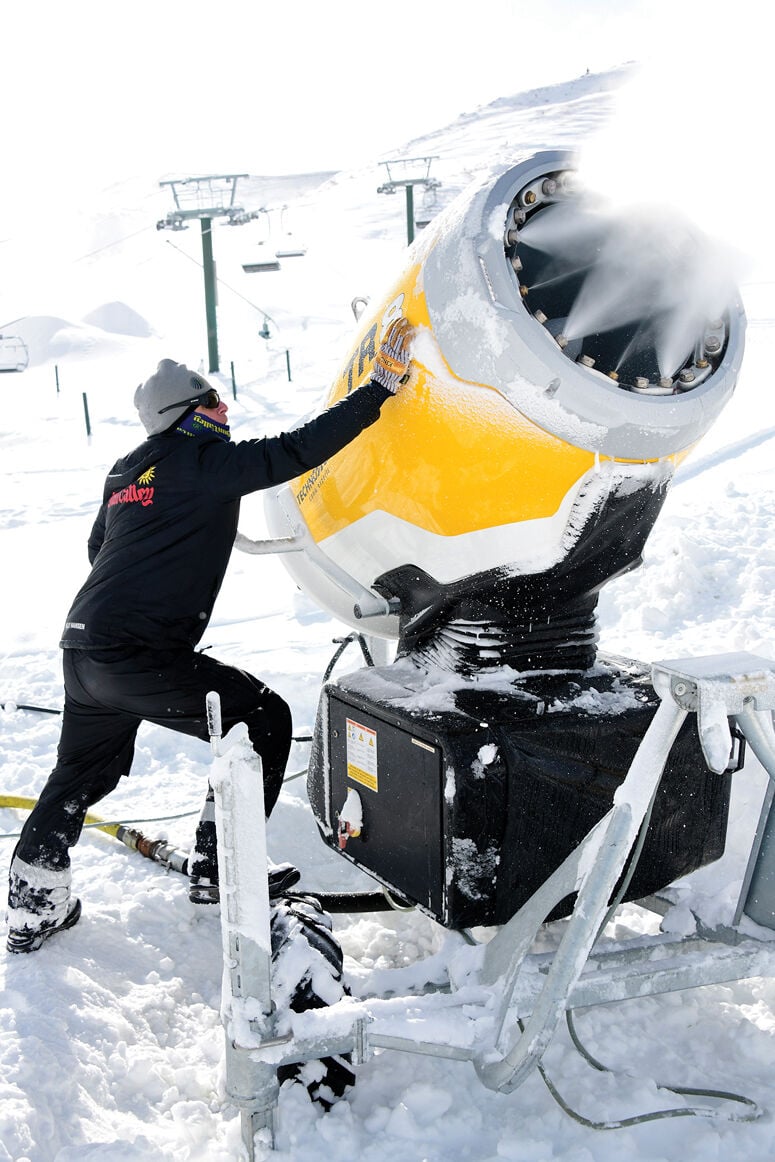 Allen manages Dollar Mountain’s fleet of 70 snow guns, which—unlike the Baldy’s system—need to be moved and calibrated by hand. He is working the new TechnoAlpin TR-8—the “latest and greatest” in snowmaking.

For Dollar Mountain Manager Corey Allen, producing high-quality powder isn’t just an art—it’s a commitment to skiers and boarders that Sun Valley’s slopes will stay open no matter what Mother Nature has up her sleeve.

Even during the driest of winters, the resort’s state-of-the-art snowmaking technology gives it a competitive edge, Allen says.

“If it turns out to be a clunker of a winter, we can still have a successful Christmas if we hit our mark with snowmaking,” he said during a recent break from managing Dollar Mountain’s arsenal of snow guns. “The holiday season can represent a third of the whole valley’s revenue, so snowmaking really ties in with repeat business and helps drive the economy.

A native of Springwood, Australia, Allen made his first foray into the ski industry in 1997 as a lift operator at Perisher Ski Resort in Snowy Mountains of New South Wales.

In 2001, Allen came to Sun Valley with a dozen other Australian lift operators and snowmakers, spending the next three years traveling back and forth before settling full-time in the valley.

Today, the avid snowboarder and father of two helps new employees at Sun Valley Resort learn the ropes of snowmaking, a round-the-clock process that involves fusing air and water at high pressure to create ice crystals.

“A lot of the new snowmakers that we have in the industry are really only in it for one or two seasons, but it’s something they will just never forget,” Allen said. “There’s a lot of pride in building skiable runs from scratch and seeing that progress.”

While snowmaking can be physically demanding, the job has several perks, he said.

“There’s a lot of pride in building skiable runs from scratch.”

“It’s a very cool experience having the mountain to yourself at night, especially with our dark skies,” he said. “I’ll encourage my guys to plan out their night so they can be sitting on a snowmobile up there at sunrise, drinking coffee, or watching meteor showers.”

Snowmaking doesn’t come without its risks. Snowmobiling, adverse weather conditions and even wild animals all present their own hazards, Allen said. Last year, for example, snowmakers on Dollar ran into wolves at the top of Sepp’s Bowl.

“I’m always preaching safety. The single most important thing is making sure our [snowmakers] are closely following the weather,” he said.

“The guns are actually checking themselves and communicating back to the main computer,” Allen said.

Compared with Baldy’s 620-plus snow guns, Dollar has around 70 snow guns, all manually operated by a crew of just over a dozen full-time snowmakers. From a pumphouse near Dollar Lodge, water is piped up the mountain to a network of snow guns, each with its own on-board air compressor.

“You need to turn on the pump, fill the system up with water, pressurize the water, turn on the compressors and open each [nozzle] head,” Allen said of the laborious process.

“When the temperature changes, snowmakers need to go out, stand underneath the guns and adjust them by hand,” he said.

Before the winter of 2006, Dollar Mountain had a small snowmaking system that only covered the top of Quarter Dollar and base area. Today, the mountain’s snow guns are able to coat nearly 100 percent of its groomed skiing runs, Allen said.

One exciting development this winter is the acquisition of a demo TechnoAlpin TR-8 fan gun at the base of Dollar—the “latest and greatest,” Allen called it. The cylindrical, single-motor gun is more energy efficient than its double-motor counterparts and uses significantly fewer cubic feet of air per minute.

“Something that the resort really pays attention to is chasing new technologies and keeping current,” he said.

Allen attributed that mindset to the late Earl Holding, who bought Sun Valley Resort after the notoriously dry winter of 1976-77 and converted Baldy’s snowmaking system to a fully automated one in the early 90s. Allen said Holding was correct in his belief that a more advanced system would put the area on the map.

“Mr. Holding was an absolute revolutionary, about 20 years ahead of his time. Our snowmaking system was the largest in the world up until the early 2000s,” he said.

“I feel like the rest of the mountain doesn’t get the praise they deserve. We have a lot of people helping us get through this busy push [of snowmaking] in November and December,” he said. “There’s no snowmaking without our groomers and lift mechanics, and no lift mechanics without ski patrol.”

One thing people may not think about is the extensive maintenance work that happens on Baldy and Dollar every summer, Allen said. The work involves hiking up and down ski runs, dragging heavy wires and checking on everything from guns to hydrants. Snowmakers upgraded around 300 of Baldy’s underground hydrants and strengthened communication networks this summer, for example.

“It’s because of this very detailed maintenance program that we’re able to make snow,” Allen said. “As soon as snowmaking season finishes, it’s on to the next season.”

Corey is a good guy doing a good job making the place where all the new riders and skiers come from! Thanks to all Dollar mountain employees!

And Corey also designed the snowmaking at Rotarun. Way to go!