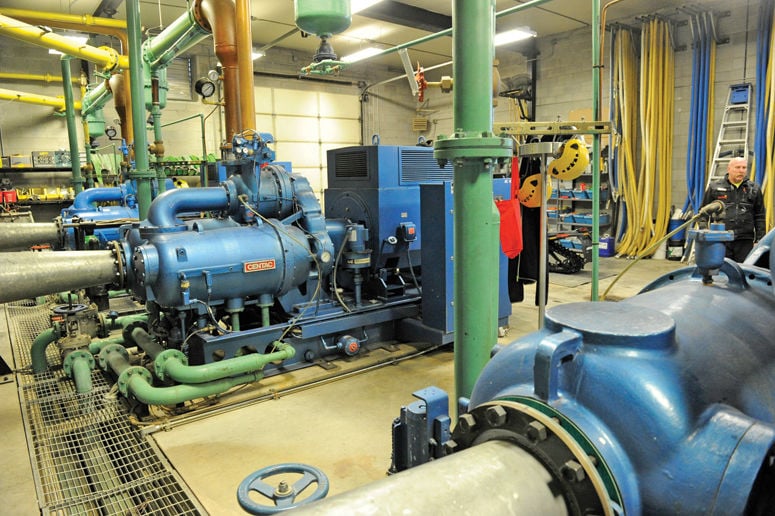 In one of the snowmaking department’s buildings on Bald Mountain, three compressors help pump air out to the fleet of snow guns. 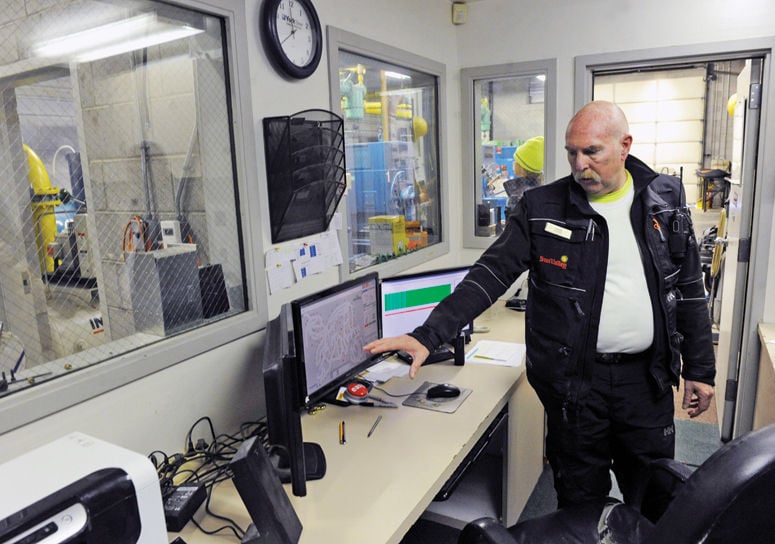 Sun Valley Resort’s snowmaking guns lay down a fresh coat of snow on the slopes of Bald Mountain.

In one of the snowmaking department’s buildings on Bald Mountain, three compressors help pump air out to the fleet of snow guns.

Mother Nature is fickle when it comes to supplying winter snow to Sun Valley, which is a tricky proposition for a resort founded 82 years ago on the idea that it would provide a European alpine skiing experience in the U.S.

Few winters have proven that more resoundingly than this one. At the beginning of the new year, the Ketchum Ranger Station had no measurable snow on the ground for the first time since record keeping began in 1938. (During the notorious drought winter of 1976-77, there was 1 inch of snow on the ground at 8 a.m. on Jan 1, 1977, according to the National Weather Service.)

Even so, Sun Valley Resort has been operating Bald Mountain continuously since it opened on Thanksgiving Day. Dollar Mountain opened fully in December and has been open since then.

The resort has an armada of 578 automatic snow guns that run along 38 miles of steel pipe, which have kept the runs filled with a skiable base. The resort has weather stations on every fifth gun, which record temperature and other data.

The resort’s snowmaking department can cover about 645 acres with manmade snow, or about a third of the 2,100 acres of skiable terrain. So far this winter, Sun Valley has turned 125 million gallons of water into snow, said Dennis Harper, the resort’s master snowmaker.

Harper has worked for Sun Valley since 1998. The most snow he can remember producing in one season was from 178 million gallons of water, which entailed making snow into March. On a tour of the resort’s system last week, Harper said he doesn’t think this winter will require snowmaking for that long.

Sun Valley isn’t the only Western resort to experience a lack of natural snowfall this winter. In Colorado and Utah, the snowpack in early January was rivaling a record low, according to the National Oceanic and Atmospheric Administration’s Western Water Assessment.

In California, the state government’s survey of the snowpack at one spot in the Sierra Nevada on Jan. 3 found it was just 3 percent of the historic average.

In December, Aspen Skiing Co. set up a soup kitchen for workers who hadn’t started their jobs yet because of a lack of snow, according to the Aspen Times.

But Sun Valley has hardly missed a beat. Hotel occupancy in the Wood River Valley during the crucial holiday weeks matched last year, according to Scott Fortner, executive director of the marketing organization Visit Sun Valley. At the end of December 2016, Ketchum had received 64 inches of snow for the month.

The valley has plenty to offer tourists who many not want to spend several days skiing Baldy, but Fortner said the snowmaking system gives Sun Valley an edge.

“I think they’ve done an excellent job, for what they had to work with,” he said. “That’s our competitive advantage.”

Sun Valley Resort started making snow in 1974, and experienced one of its skimpiest winters for snowfall in 1976-77.

Mother Nature simply refused to bring snow for the first few months of that winter. The serious snowfall throughout the West didn’t come until March, forcing two major downhill ski races to relocate to Sun Valley because it had manmade snow.

“Mr. Holding knew what he was getting himself into,” he said.

In those early days, snow guns were manually operated. The resort still has some of those early models on Baldy, and uses them to augment the snow created by the automatic guns, Harper said.

The snowmaking department will use the manual guns to prepare for the U.S. Alpine Championships, which Sun Valley will host in March. The resort also hosted that ski competition in 2016, which was the first time it had hosted a major ski racing event since 1977.

The manual guns are small and squat, bearing a resemblance to artillery cannons.

“We don’t have an unlimited amount of air,” Harper said. “The more air you use, the costs get higher.”

The guns rely on a mixture of compressed air and water to blast out snow.

On the River Run side of Baldy, the resort pumps water from an underground well. On Warm Springs, it siphons the water out of the Big Wood River.

The water is pumped uphill. On the River Run side, it moves through a gray building that’s a stone’s throw downhill from the Roundhouse restaurant.

The building has massive fans on the side, which help cool the water to the coldest temperature possible, Harper said. A similar conveyance happens on Warm Springs, though the snowmaking department will also pump water downhill so it can reach specific runs.

In the building near the Roundhouse, the department has six pumps ready to move water out on the pipes to the snow guns. It also has three compressors that each have 1,100 horsepower and the capability of producing 5,000 cubic feet per minute of compressed air. A central computer system controls the automatic guns.

Harper notes that the manual guns could take an entire compressor to run.

“A lot of resorts, that’s all they have is manually operated snow,” he said.

About 20 years ago, Harper said, the resort started to install snow guns made by a company called York, which later combined with TechnoAlpin.

That class of guns sits atop poles that are about 20 feet tall, and have two nozzles, one for air and one for water. Those guns use 200 cubic feet per minute of compressed air.

The newest class, called the TechnoAlpin Rubis Evo and SR, has three nozzles that are miniscule in diameter. It needs just 20 cubic feet per minute. The manual guns have nozzles with a much larger diameter. The new model introduces a tiny bit of water to create a small ice crystal. It varies in how much snow it can produce, depending on temperature.

However, they can’t be located everywhere on Baldy because they require 300 pounds per square inch of pressure to operate.

The resort can make 20 gallons a minute with one gun from the older class of York guns. Or, with the same amount of power, it can turn on 10 of the new guns and create 200 gallons a minute, said snowmaker Corey Allen.

There’s a difference in the size of ice crystal, too, which influences the kind of snow base that’s created. The older York units produce a smaller crystal, while the newer guns create a larger crystal, Allen said.

“You have these two crystals,” he said. “It’s like the difference between a bucket of sand and a bucket of gravel.”

With the help of Idaho Power, Sun Valley has been replacing the older guns with the newer ones. Since 2014, the utility has spent $289,078 to help Sun Valley replace 282 guns total, which has saved 1.6 million kilowatt hours of electricity.

The cost for Sun Valley to produce an acre-foot of snow using the older York models is $437, Harper said. With the new models, it’s $22.50 per acre-foot.

For Idaho Power, it’s cheaper and easier to save energy compared to developing and paying for a new energy source, such as a natural gas plant, said Randy Thorn, the utility’s energy efficiency engineer. Throughout the Wood River Valley, the program has implemented 196 energy-savings projects that have saved 6.7 million kilowatt hours of electricity since 2013.

“Why would we give Sun Valley money to put in these new guns?” Thorn asked. “What’s the cheapest resource out there? It’s energy efficiency.”

Harper said Sun Valley likes to use the maximum amount of water available in its water right if the conditions call for it. That’s not considered a consumptive use, because the snow will eventually melt back into the river and aquifer. In a single day, it’s 3 million gallons.

“Back in the day, we didn’t really pay attention to how much power we were saving,” he said. “These guns make us more productive.”

Sun Valley Resort’s snowmaking department has been replacing its snow guns over the past four years, with the help of an incentive program from Idaho Power Co. The utility has been helping to pay the cost of the replacements because newer models use less electricity. Over the life of the program, Idaho Power and the resort have saved enough electricity to power 127 homes for a year.

Here is a year-by-year look at the replacement program: