A photo taken by contractor Hobble Creek Services and entered as an exhibit in federal court in Boise shows a helicopter allegedly owned by David Boren’s brother, Michael Boren, hovering over a machine building a trail across the Sawtooth Mountain Ranch. 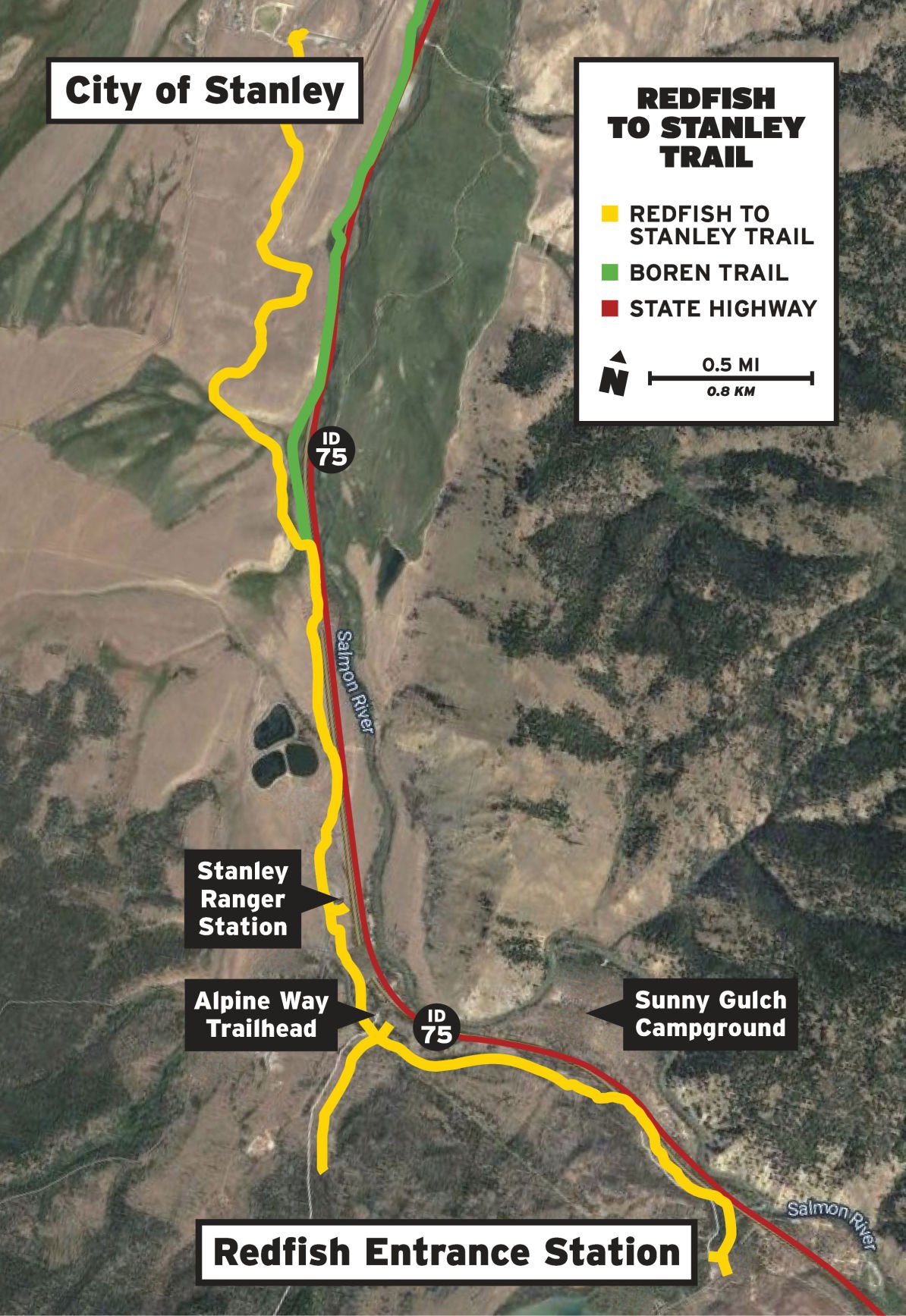 The northern 1.5 miles of a trail under construction between Stanley and Redfish Lake, shown in yellow, crosses the Sawtooth Mountain Ranch on an easement. Ranch owner David Boren is proposing an alternate route, shown in green, for that portion of the trail.

Despite an ongoing lawsuit by a private landowner and alleged harassment of workers by a low-flying helicopter on Saturday, construction is underway on a 4.5-mile pedestrian, biking and equestrian path between Stanley and Redfish Lake.

Approved in 2017 by Sawtooth National Recreation Area Ranger Kirk Flannigan, the $2.5 million trail would connect Pioneer Park at the southern end of Stanley with the Redfish Lake Road just west of its intersection with state Highway 75. The 6.5-foot-wide path will be composed of compacted gravel and natural surfaces, and will be accessible to wheelchairs.

Construction of the trail was delayed last summer by the filing of a lawsuit in the U.S. District Court for Idaho by Sawtooth Mountain Ranch owner David Boren and his wife, Lynn Arnone, residents of Boise. The trail crosses about 1.5 miles of the 1,781-acre ranch at its northern end just south of the airport, using an easement sold to the U.S. Forest Service by a previous owner before Boren bought the ranch in 2016. Boren and Arnone claimed that the proposed trail deviated from the location granted in the easement. They also objected to its size and to the extent of development, contending it is inconsistent with the type of primitive trail common on the SNRA.

U.S. District Judge Candy Dale denied their motion for a preliminary injunction against trail construction last summer, but they have since filed two amended motions for an injunction, based on alleged violations by the Forest Service of federal environmental laws.

A hearing on the most recent motion was held on Friday, June 19, but Dale had not issued a decision by press deadline Thursday.

In an interview, Flannigan said trail construction began June 16, and by this week about a mile of it had been roughed out by various kinds of machinery. Much of that work is on the easement within the Sawtooth Mountain Ranch. He said the Forest Service decided to start at the trail’s northern end because construction conditions are easier there than at the southern end.

Flannigan said he expects the trail to be done or nearly done by this fall.

On Saturday, David Coyner, co-owner of Hobble Creek Services, a Springville, Utah,-based contractor hired to build the trail, provided a statement to the Custer County Sheriff’s Office alleging that he and his workers had been harassed by a low-flying helicopter earlier that day.

Coyner stated that he and his crew were working just south of the Stanley Airport when a red helicopter flew by about a quarter of a mile away, then turned and flew over them. He stated that the helicopter stopped three times for about 30 seconds each time 15-20 feet above the ground at spots close to workers on the machines. According to the statement, there were two people on board with one person taking pictures or video of the workers.

“He was close enough it blew my hat off and was throwing dirt and debris,” Coyner stated.

Another worker stated that the helicopter was only about 8 feet off the ground and 40-50 away from the machine he was driving.

A spokeswoman for the Sheriff’s Office said the complaint has been turned over to the Federal Aviation Administration.

On Wednesday, the U.S. Government filed a motion in federal court stating that the helicopter belongs to David Boren’s brother, Michael. The agency is seeking a temporary restraining order and preliminary injunction ordering David Boren and Lynn Arnone to stop interfering with construction of the trail.

“That the purpose of the unsafe and dangerous low-level flights was, at least in part, to harass the workers building the Trail was evident in the obscene hand gesture made by the helicopter’s passenger towards the workers,” the government stated in a memorandum in support of its motion.

Boren and Arnone filed a response Thursday stating that the Forest Service provided no evidence that they were acting “in concert” with Michael Boren. Their response also contended that the court has no authority to issue an order against Michael Boren since he is not a party to the lawsuit. (According to Custer County records, Michael Boren owns land in the area several miles south of the project.)

A website has been created advocating that an alternate route be chosen for the trail that would get it out of the center of the ranch and along its eastern edge parallel to the highway. The website, buildabettertrail.com, contends that the alternate route would eliminate conflicts between trail users and cattle, get it out of wetlands, elk calving areas and sandhill crane habitat, avoid marring the landscape in front of the Sawtooths and be in a cooler location off the open sagebrush-covered bench.

The website contains no contact names. It states that it represents a “coalition of Idahoans” and “a non-partisan group of recreationalists, conservationists, and ranchers” as well as “aviators, parents of children who use ADA-compliant trails, and landowners who want to find a viable and safe solution.”

Sawtooth Mountain Ranch spokeswoman Erin Hudson with Atlas Strategic Communications in Boise did not answer a question from the Idaho Mountain Express asking how many people are involved in the “coalition” and did not respond by press deadline Thursday to a question of whether the web site had been created by David Boren. She did say that petition signers had not been asked to help fund the web site.

Flannigan declined to say whether the Forest Service had received the petition.

Stanley Mayor Steve Botti said in an interview that he expects the trail to be “one of the most popular trails in the state of Idaho,” particularly for visitors on bikes as a safer route than the highway between Stanley and Redfish Lake.

“He was close enough it blew my hat off.”

I have experienced the same low flying by this red helicopter in the last month or so on Shaw Mesa, who are these people? Concerned...

This guy isn't making many friends in the way he is acting. He started a web site to promote his cause and I did a mass mailing trying to drum up support and now pulls off this latest stunt.

meant to say he did a mass mailing not me.

Bring a rifle and fire a warning shot. If they want to die in a helicopter crash then so be it.

Do you often promote a felony as your best advice?

Not when your defending yourself on the job from thugs physically threatening your life with a helicopter. Stand your ground applies. Besides they have already been advised to bring a rifle to defend themselves from these thugs. If you don't want to die in a helicopter crash don't use it as a weapon to threaten American Workers. Hope they do push it and get blown out of the sky. They would deserve it.

Another internet tough guy. Your concerns are best addressed by the FAA and Custer County sheriff. Who advised them to "bring a rifle"?