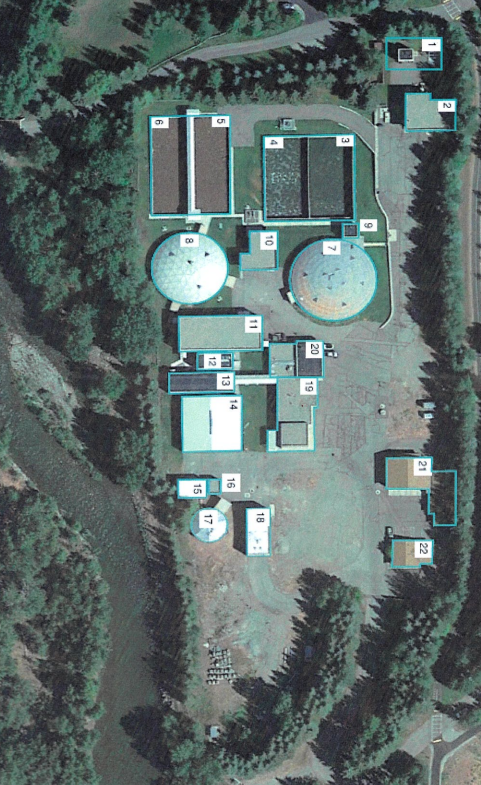 The plant as it is today, viewed from above. 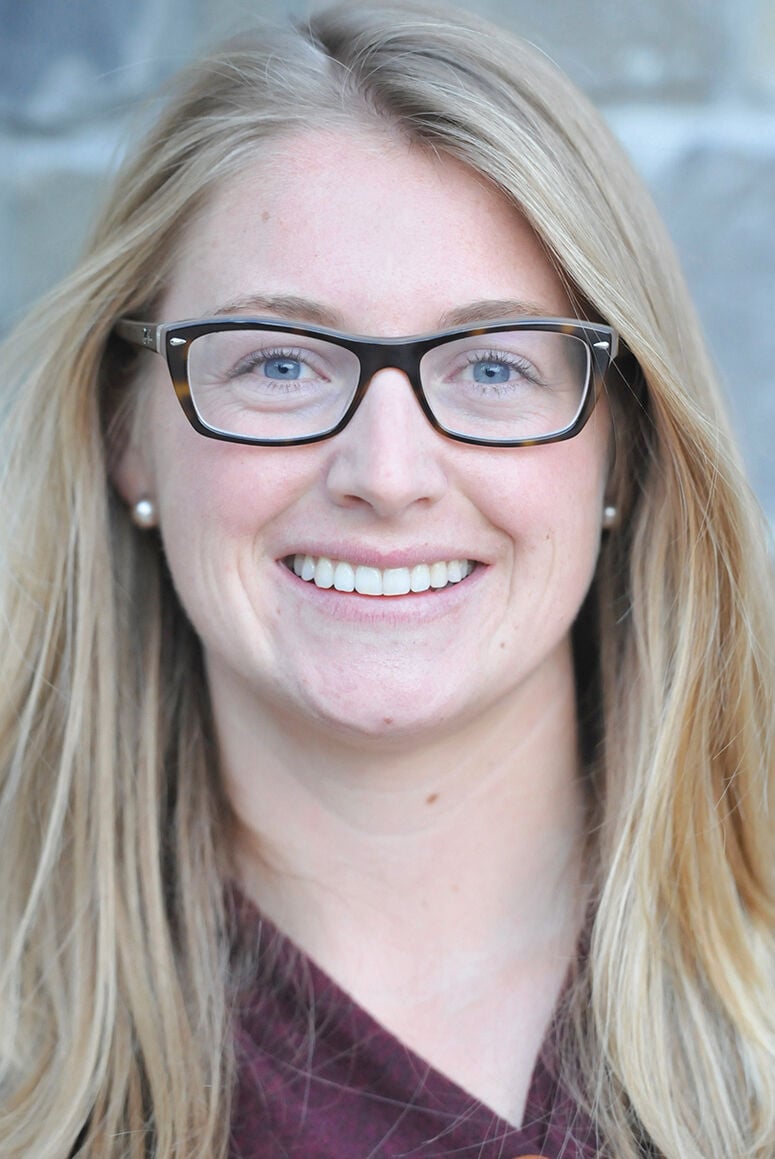 Ketchum city leaders are moving forward with a plan to have citizens vote in the Nov. 8 elections on whether to approve a revenue-bond issue of up to $14 million to help fund major improvements to the wastewater treatment plant it co-owns with the Sun Valley Water and Sewer District.

City Council members gave their first formal nod of approval to the plan Monday by voting 4-0 to conduct a first reading of an ordinance to establish ballot language for the vote and to request that the county clerk prepare ballots for the election. Council members must approve three readings of the ordinance for it to be enacted, though they can vote to waive subsequent readings.

The plan presented to the council by City Administrator Jade Riley and bond consultants calls for selling municipal revenue bonds to buyers and combining the proceeds with income from a series of single-digit sewer fee rate increases. The combined funding would be put toward Ketchum’s share of an estimated $37 million set of projects to make necessary upgrades to the wastewater plant.

Zions Bank adviser Michael Keith said the plan is to sell $6 million to $7 million in revenue bonds in fiscal year 2023 and to withhold the sale of the remainder of the $14 million in bonds for a later date. Bonds could be sold “as needed” to cover approved upgrades, he said.

“That $14 million has a little bit of flexibility in it, meaning that, you know, it’s an amount slightly more than we think we need today,” Keith said. “But it’s also an up-to amount and also doesn’t mean that the city needs to issue everything that’s going to be asked on the ballot question.”

The jointly operated wastewater treatment plant south of Ketchum along the Big Wood River serves the cities of Ketchum and Sun Valley. Earlier this summer, a consultant presented to Ketchum leaders an analysis of the facility that concluded it needs some $37 million in upgrades between this year and 2042. Some components of the plant are more than 50 years old and degraded, the consultant noted.

The costs would be split evenly between Ketchum and the Sun Valley Water and Sewer District. Ketchum plans to cover its share with funds from the revenue-bond issue and income from monthly user fees. The fees would be bolstered by a 7% rate hike in fiscal year 2023, followed by 5% rate increases in subsequent years, subject to annual review.

The Sun Valley Water and Sewer District is working on its own funding plan. Ketchum is working with the district to update an agreement to share the costs of the facility and its operations.

Revenue bonds are commonly used to generate income to fund major municipal projects. Though they are a form of debt, unlike general-obligation bonds, they are not paid for with the municipality’s tax income. Revenue from the facility at issue—in this case, sewer fees paid to the city—are used to make interest and principal payments to the purchasers of the bonds.

Approval of and issuance of the bonds would not affect property taxes.

The proposed ballot language for the bond question notes that if the city pursued a “non-debt” funding plan paid for only with income from sewer fees, it would have to raise the fees by 60% in fiscal year 2023 and 25% in the following two fiscal years. That approach would not only dramatically raise ratepayers’ out-of-pocket costs, Riley has said, but would place much of that cost burden on existing ratepayers, instead of spreading it out over the duration of the bonds.

“We as a council were given multiple choices. One is increase rates by a lot, one is issue these bonds, and one is do no capital improvement.”

Currently, the monthly sewer fee for a single-family home in Ketchum is $39.12.

Issuing $14 million in revenue bonds would require paying interest to the buyers. Based on a current market rate of 4.16%, the city estimates it would pay about $10.8 million in interest in addition to the principal amount of $14 million.

In a public hearing Monday, Ketchum resident Perry Boyle asked city staff and city leaders if all viable funding options had been assessed, and whether the city had adequately ensured the plans to upgrade the wastewater plant meet goals for environmental sustainability.

“And so, I just push back a bit on the process here,” Boyle said. “You’re about to approve a very, very major expenditure for the taxpayers, and it just feels like not all of the aspects of this project have been vetted by the council.”

“They all feel that our wastewater treatment is very sustainable in the way that it operates, and continue to seek the best technology that they can in terms of minimizing any of their greenhouse gas emissions,” she said.

Hamilton said she believed the City Council was making an “informed decision.”

“We as a council were given multiple choices,” she said. “One is increase rates by a lot, one is issue these bonds, and one is do no capital improvement.”

The city needs to get final approval of the ordinance from the City Council by early September, in order to submit final ballot language to Blaine County by a Sept. 9 deadline.

To proceed with the bond issue, the city would need to garner 50% approval from voters, a lower threshold than for taxpayer-backed general-obligation bonds.  

I wonder if Ms Hamilton would swear to her statement in an affidavit?

In June, this bond issue was supposed to be $10mm. In July it inched up to $12mm. Now in August, it has reached $14mm. We vote on it in Nov--will it be at $20mm by then? The Council publicly considered no alternatives, and has considered no alternatives to offset any of the costs. For example, a large amount of treated water is provided, at no or low charge, to Sun Valley Co and to Weyyakin for their irrigation. No wonder they are so green. Can they be charged more for that? This is water that would otherwise be put into the Big Wood River. Or maybe it could be offered to Ketchum users for irrigation? What is the highest and best use for this water?

We are going to spend $37mm to rebuild a 1984 water treatment facility (WaTF). There has been no public disclosure of the green house gases (Methane, Nitrous Oxide, Carbon Dioxide) emitted from this facility and the options around mitigating this off-gasing. How much would it cost to build a modern WaTF? We don't know, because we never asked.

As one example, Milton FL, population 27,000 is spending less than $30mm for its new plant (including land) and is offsetting that with $4mm from the CARES Act.

Why the rush? Why not consider all options? This seems to be the norm in Ketchum.

Yes, one has to question a banker that is selling bonds on the claim of only two ways to fund it: buy my bonds or raise rates extremely.

My guess is that a stream of smaller increases would fund this...it takes years to design and construct improvements. Collect the money from rates while you plan the work.

What's up with Ketchum and debt lately... someone have a need to spend too much?

"The Sun Valley Water and Sewer District is working on its own funding plan."

I respectfully suggest that Peter Hendricks, Michelle Griffith and the other members of of the Sun Valley City Council do the following to support this much needed infrastructure upgrade:

1. Figure out the funding plan;

...BEFORE spending their constituents' (the taxpayers) money to pay for a gratuitous mutilation of Festival Meadows and the proposed design by BYLA Landscape Architects.

Give yourself raises, ignore your city staff and ask for a bond....well played!

The bond issue spreads the cost out over the future 20 years to address that issue.

I have an idea. Stop all the building and there would be no need for more sewer capacity......

Another idea would be to have the new comers pat for it through increased building fees.

Why do present residents have to bear the cost of servicing newbies?