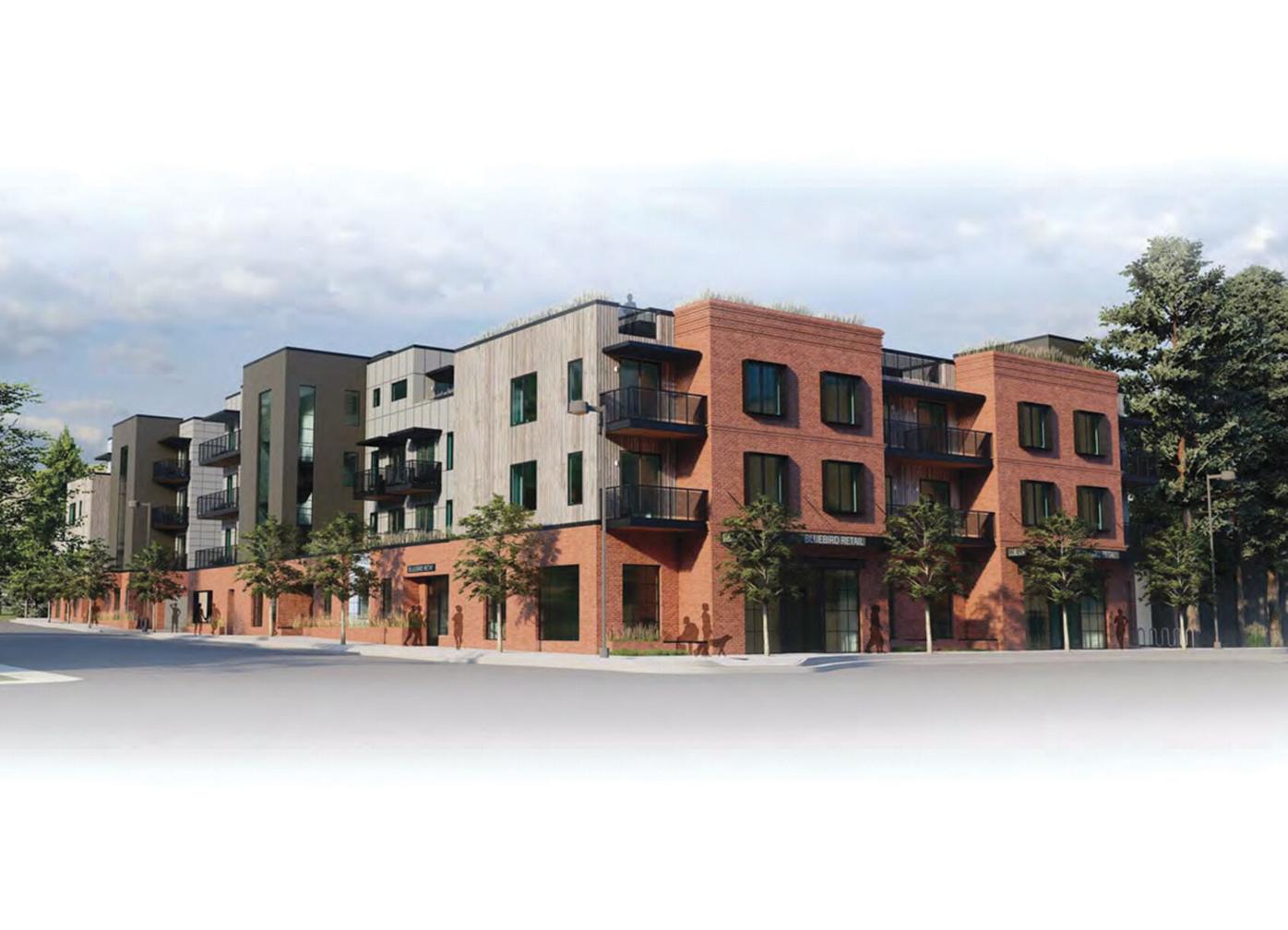 The Bluebird Village workforce-housing project planned for the site of City Hall in downtown Ketchum includes 51 rental units and a variety of amenities. Plans call for renting units to local workers who would be subject to income requirements and employment verification. 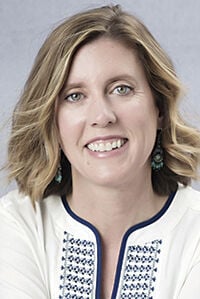 The favorable votes bring the long-debated project past most of the significant hurdles for approval, but some steps remain before construction planning starts in earnest.

Ketchum City Council members cast two unanimous votes Monday to advance the 51-unit project. On a motion by Councilwoman Amanda Breen, the council voted 3-0 to affirm the Planning and Zoning Commission’s approval of the project’s design, to approve a height bonus and to allow a fourth floor in the two buildings. Council President Courtney Hamilton recused herself from the discussion and vote because of a conflict of interest related to her employment.

The City Council also voted 4-0 to approve the first reading of an amendment to the zoning code that would change a mandatory 10-foot structural setback on the fourth floor of projects that are 100% community housing to an average setback of 10 feet. The Bluebird Village project design is based on approval of the code change, which requires three public readings before it is enacted.

“It’s going to have such a positive impact on our community,” Councilman Michael David said, referring to the project.

Breen said she is “really excited” about the proposed development.

“I think it’s really going to add a lot of vibrancy,” she said.

“We need to build this as soon as possible,” he said.

Several citizens spoke out against the project, including longstanding opponent Perry Boyle, a Ketchum mayoral candidate who has called Bluebird Village “a 10-pound bag of manure in a 2-pound bag.”

Seattle-based GMD Development is working in partnership with the nonprofit Ketchum Community Development Corp. to develop Bluebird Village, which consists of two four-story buildings totaling approximately 68,000 square feet at 480 East Ave. For decades, the 0.6-acre site with two lots has been the headquarters of Ketchum City Hall, the Fire Department and Police Department. The Fire Department moved to a new headquarters last month. Other city operations are scheduled to move to a new facility later this fall.

The existing City Hall building would be demolished and the city land would be leased for the project for up to 99 years. The city is providing the land and has reserved $1.4 million from its Housing In-Lieu Fund—funded with money collected from developers who pay the city a fee instead of building required workforce housing—to potentially assist in some expenditures. The Ketchum Urban Renewal Agency has reserved some $565,000 to potentially fund infrastructure work on the project.

Tax-credit financing being applied to the project mandates land-use restrictions that would require the development be maintained as affordable housing for at least 40 years. In the complex financing model, the Ketchum CDC—a nonprofit organization that works on revitalization projects in the city—would assume ownership after 15 years.

The two buildings—with maximum heights of approximately 51 feet and 49 feet—would include a combination of studio, one-bedroom, two-bedroom and three-bedroom units, ranging in size from about 460 to 1,100 square feet. The deed-restricted residential units would be built on three floors over ground floors that include offices, commercial spaces, 46 parking spaces and 133 bicycle spaces. The buildings would be connected by an enclosed, elevated walkway over the city alley dividing the site.

“I pray for Ketchum.”

Amenities for residents include decks, storage lockers, a small fitness center and a rooftop community area.

The project takes advantage of development bonuses in city code for buildings that are 100% community housing, including a density bonus and a provision that it is eligible to reach a height of 52 feet.

On Aug. 10, the P&Z unanimously approved the design-review application for the project, as well as other pieces of the developer’s set of applications. Ketchum code requires that the City Council approve building heights that exceed 48 feet and the fourth floor of buildings approved by the P&Z.

In presenting the project to the City Council, Dunfield said he has tried to address concerns expressed by neighbors of the site, numerous citizens and the P&Z. The process of developing the Bluebird project started in 2018.

“It’s been a long road for us to get to this point,” Dunfield said.

“I truly believe it will be one of the most beautiful and attractive buildings in downtown,” he said.

In a public hearing, Boyle objected to the project and the cost to taxpayers, saying the city could have pursued better options for providing workforce housing.

Sue Dumke, owner of property adjacent to City Hall, said the project would significantly impact her residence, with light pollution and imposing bulk.

“I pray for Ketchum,” she said.

John Melin, owner of the nearby business Ketchum Kitchens, said Bluebird residents would use up parking in the neighborhood and hurt businesses.

“We need housing for all of our employees,” Michael said. “Businesses are closing, and if we can get this built, I think we’ll have a more vibrant Ketchum.”

Councilman David said he believes the project is highly preferable to the existing City Hall building, saying it would be “a huge improvement, aesthetically and for the vibrancy of downtown.”

Breen asked Dunfield to describe the qualification process for renters.

Dunfield said a “very professional” process would verify that renters meet the income requirements, which would be reviewed annually with issuance of leases.

Bradshaw said the city is developing its local-preference policy for renters. The policy can favor local workers but cannot fully exclude some other candidates.

“What we have here is an excellent product, and a much-needed product,” Bradshaw said.

Breen said the long process of approval for Bluebird provided a better development in the end. She also criticized the dissemination of “untruths and lies” by some opponents about Bluebird Village and the vetting process for renters.

“This is not a project that’s going to end up as some millionaire’s ski locker,” she said.

City officials must still develop a lease agreement for the site and discuss potential financial contributions, City Administrator Jade Riley said. Other procedural steps for the developer include obtaining a building permit.

Financing for the project is in place, Dunfield said in an interview Monday. However, some elements of the financing must still be finalized.

Dunfield said he intends to start construction next March.

What's to keep the owner of BlueBird from turning the building into condos? A couple of snarky lawyer and boom.

Ketchum was ruined a long time ago. You idiots deserve each other and this misguided project. Another terrible mistake. That anyone is surprised by this, is laughable.

Where will all the customers of the down town businesses park ? What happens to parking in winter

The Mayor has been very clear on this point. The consultants he has hired with taxpayer money say there is no parking problem in Ketchum. People who say there is a parking issue are just rich NIMBYs against his housing project.

Great question that I have been asking all along…

First off, I agree that the parking proposal is overly optimistic at best, even if you assume that given the income limits some people will go carless.

That being said, most businesses by Bluebird are largely surrounded by 2 hour limits. And hell, Ketchum Kitchens is a block away from a parking lot that basically never fills up.

If you're a business that actually serves the working and middle class of Ketchum, then I fail to see how having more potential customers nearby is a bad thing. When someone in Bluebird needs a household essential ASAP, they'll go to Chateau Drug. When they need a quick meal to go or forget something, they'll go to Atkinson's (I mean, let's be real, they won't do most of their grocery shopping there though).

Also, am I the only person who essentially never has trouble finding parking in Ketchum? My girlfriend and I both work in the central core and always are able to park within a block or two. Same when we visit friends. The bus system is also incredibly regular and serves huge swathes of Ketchum during winter (and summer to a lesser extent; slack hours can suck, especially for going out).

Those 46 parking spots are no all available to tenants. 2 are for handicapped. 1 is for the retail facade. 8 are “tandems” where one car blocks in another. An unspecified number will be dedicated to the yet to be explained car sharing program. There also doesn’t seem to be enough turning radius in the garage for a pickup truck. So much for worker friendly housing!

Public records show that his friend Greg did let name him pick the name and he chose Bluebird. .

This is a for profit project. The seattle based developer is putting in no money of its own and is taking out a development fee. It looks like that money is already being reinvested in a mansion going up, not in Ketchum, but in Sun Valley.

"Major hurdle?" What a joke. This thing has been a done deal since Nov 5, 2017. The City hasn't held this building to any kind of safety standard. You couldnt build a hotel like this--it would not be deemed safe. GMD has never published its financials for this project. To get a $12mm tax credit we are giving away $20mm in taxpayer resources. Think of all the housing deeds we ciuld have bought! Now--not years from now. This is just dumb.

Before final approval the City Council needs to go into further detail regarding the "local preference policy" for renters of units in Bluebird. As a reminder, Mayor Bradshaw is on record staying that because Bluebird is being financed with TAX CREDITS, they can not restrict renters who do not work in Ketchum. We must know up front what the exact plan is before final approval of Bluebird. It is well known that in the case of Northwood Place the qualification process is loose making it possible for some renters to take advantage of it. It should never be the case that a renter who exceeds the income require be allowed to take the place of someone who doesn't. I am also very concerned about the ADA requirements for Bluebird. It is stated in the agenda packet that Bluebird will be carefully scrutinized by the State of Idaho to make sure it is in compliance, again this is not an option that can be overlooked.

it is not about how much money a person makes to live there, who decides if they work at essential jobs ? If that is the intent ?

It’s not an issue. There is no requirement to work to live in Bluebird.