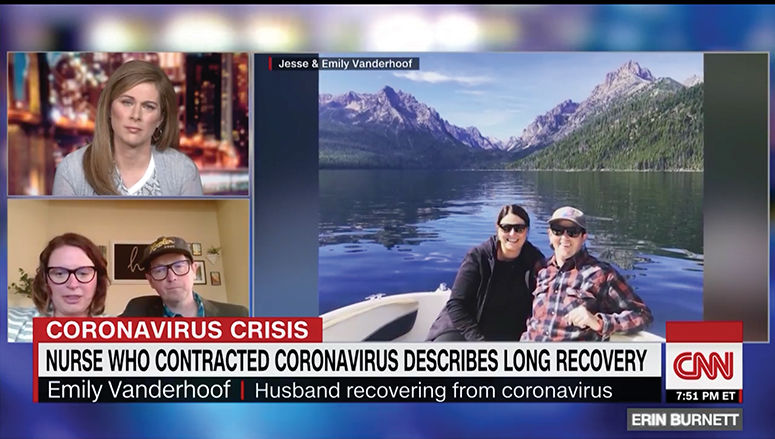 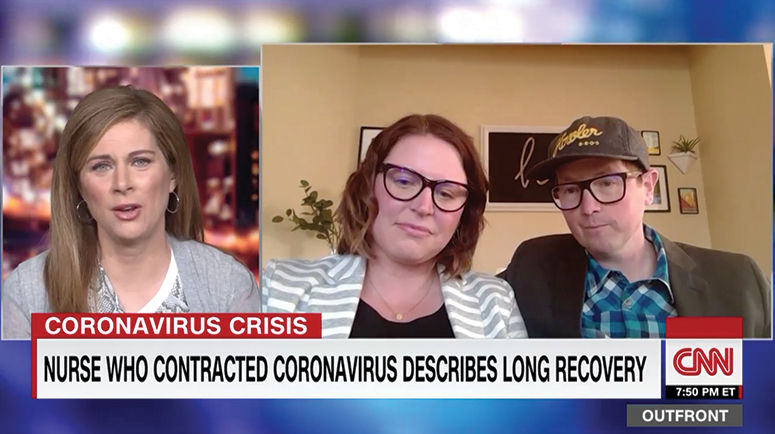 Nearly two weeks after being discharged from the intensive-care unit at St. Luke’s hospital in Boise, Hailey nurse Jesse Vanderhoof continues to make daily strides in his recovery from COVID-19. But coming out of a medically induced coma hasn’t been an easy walk in the park, Jesse and his wife, Emily, told CNN anchor Erin Burnett in a Wednesday interview.

“I don’t totally feel like I got run over by a Mack truck anymore, but I still feel the effects of COVID,” Jesse told Burnett.

“My brain wanted to keep on looping over and over. I kept on asking questions, without realizing I’d [already] asked,” he said. “I woke up on my birthday with 50 texts. … I didn’t understand at all what was happening.”

Jesse said his thoughts have slowly begun to clear, though recollections of working at the COVID-19 testing site outside St. Luke’s Wood River remain hazy. He still isn’t sure whether his delirium came from the sedatives he was given while on a ventilator or the virus itself.

“We’re almost through [the delirium], but it’s been a rough few days of him trying to clear his head,” Emily said.

When Jesse was first discharged, he needed a walker to navigate the house. Emily made a makeshift bed downstairs, slept on the floor next to him and checked on him throughout the night.

“[Recovery] is not as simple as picking someone up from the hospital and driving home, and they’re fine,” she told Burnett.

“If I’ve learned anything in this experience, it’s that I want to help people more than I ever have before,” he said.

What were you thinking??? Mountain biking and trail-building destroy wildlife habitat! Mountain biking is environmentally, socially, and medically destructive! There is no good reason to allow bicycles on any unpaved trail!

Bicycles should not be allowed in any natural area. They are inanimate objects and have no rights. There is also no right to mountain bike. That was settled in federal court in 1996.

Got Compassion or Empathy?

Wow! What a fine example of replying waaay off topic. Why not wait to express your opinion on the next mountain biking article in the sports section rather being triggered by this article?

He’s a nurse, a neighbor in our valley, one of the ones we howl for. Because of his taking care of others he’s gone though a life altering experience being on a ventilator and not being able to hear his wife’s voice or feel her hold his hand. He could have long term damage to some organs.

I wish Jesse and Emily well and hope that he will be back on his bike soon.