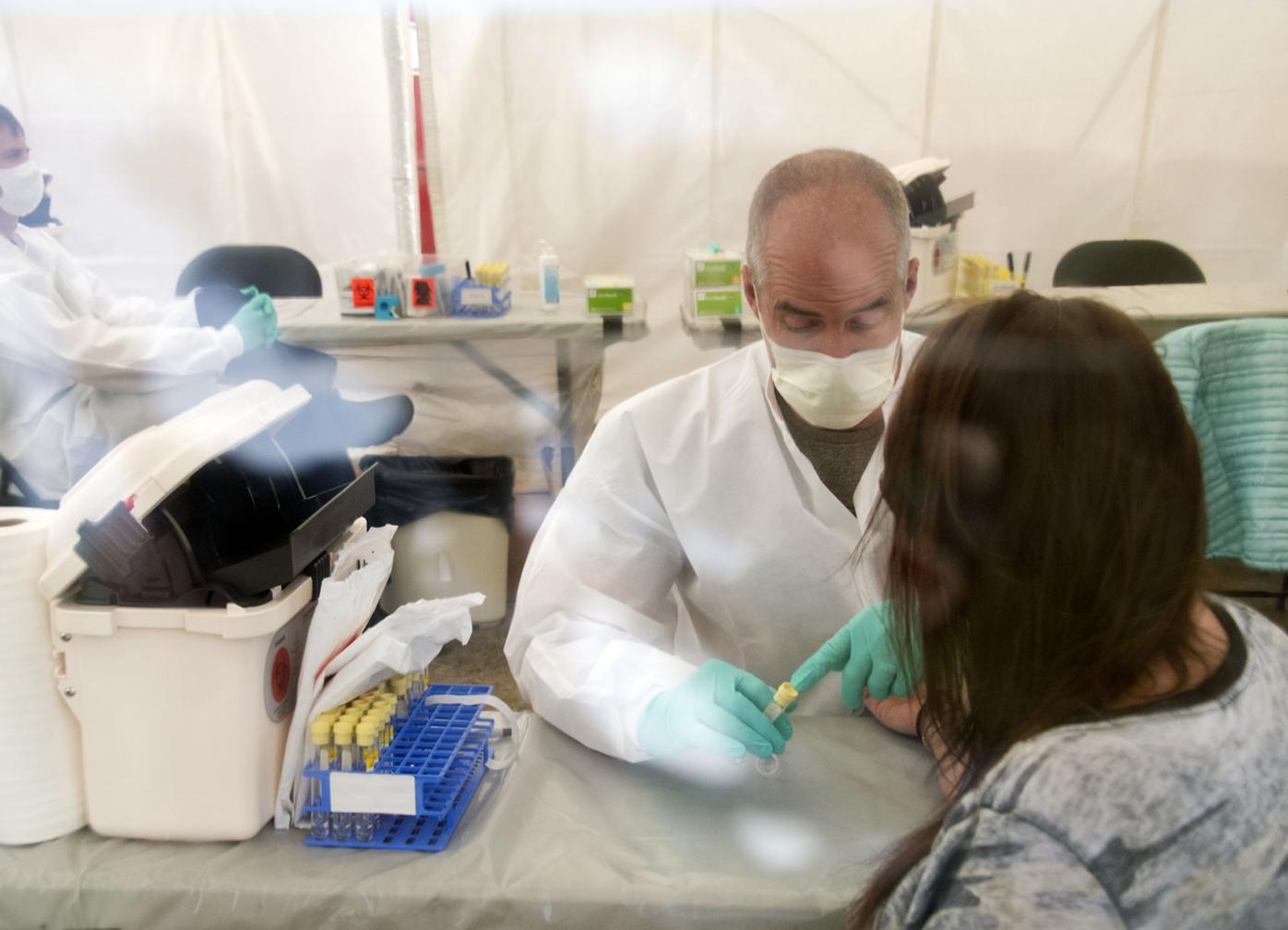 As lateral-flow testing ceased in downtown Ketchum, ELISA testing for a city-led COVID-19 antibody study continued in the parking lot of the Wood River YMCA on Tuesday morning. A collaboration with Albany College of Pharmacy and Health Sciences in New York and the Fred Hutchinson Cancer Research Center in Washington, that aims to test a 400-person sample as part of a broader body of research. 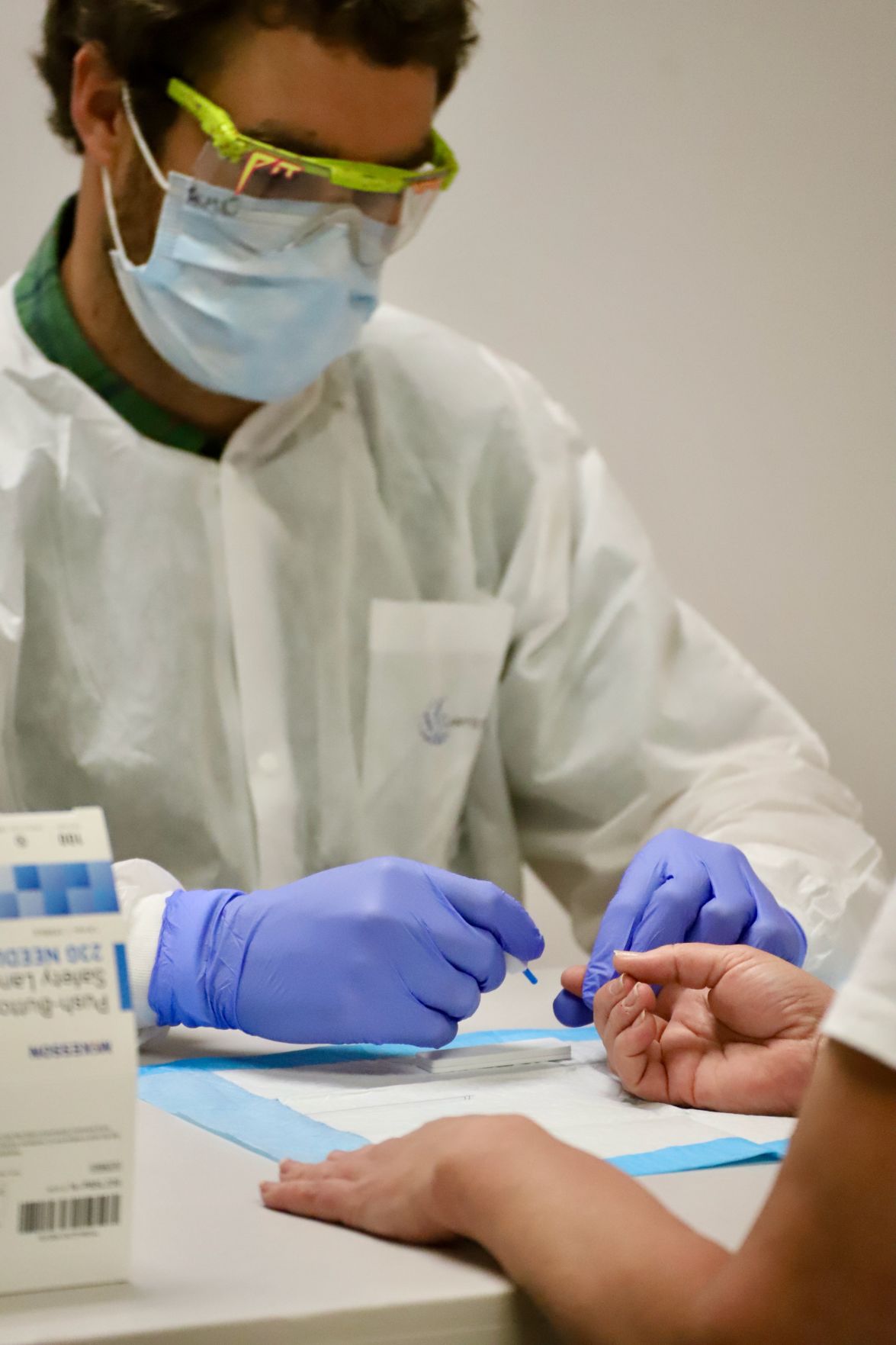 The COVID-19 Response Group suspended its free coronavirus antibody testing project in Ketchum three days after its launch, the group said in a Tuesday statement.

“We chose to suspend operations beginning May 12, as we navigate the landscape of changing federal regulations,” a sign outside the Ketchum testing site on Washington Avenue reads. “We will move forward in a way that provides the best testing project for our community. Your support is greatly appreciated, and we thank you for your involvement with this project.”

The group had been using finger-prick lateral flow testing kits to screen patients for IgM and IgG antibodies generated by COVID-19. The kits had not yet received FDA approval, according to product seller Confirm Biosciences.

“Results from antibody testing should not be used as the sole basis to diagnose or exclude SARS-CoV-2 infection, or to inform infection status,” Confirm Biosciences’ website states.

To better understand the pros and cons of lateral flow testing, the Mountain Express spoke with Boise-based infectious disease specialist Dr. Sky Blue. According to a World Health Organization publication, the testing kits from Confirm Biosciences—manufactured by China-based Orient Gene Biotech Company—showed in preliminary studies an overall sensitivity, or true positive rate, of 83 percent, and specificity, or true negative rate, of 100 percent.

“You can think of specificity as the accuracy of a negative test, or how likely that someone is truly negative when they get a negative test result,” Blue explained.

Though the Orient Gene test used in Ketchum had shown promising results in a Dutch study earlier this year, Blue said lateral flow tests, as a general rule, tend to be less accurate than two other COVID-19 blood tests on the market: ELISA (enzyme-linked immunoabsorbent assay testing) and CLEIA (chemiluminescence enzyme immunoassay testing).

The valley's other antibody test, a collaboration between the city of Ketchum, Blaine County Ambulance District and a pair of research institutions, utilizes ELISA testing. As of Tuesday morning, that study remains ongoing.

“ELISA and CLEIA tests have had more robust validation studies that have run thousands of samples,” Blue said. “With the lateral-flow test, it’s really been the Wild West out there.”

“After IgM is pumped out, it will bind to the virus, creating a feedback loop to produce more of itself,” he said. “IgM indicates recent or active infection, and IgG—which is much smaller and more tailored to the virus—will appear in the bloodstream later, indicating past infection.”

IgM usually shows up three to five days after the onset of symptoms and IgG can appear in as soon as seven days, Blue said. But getting back a positive IgM lateral-flow test result could mean you’re fighting another virus, like the common cold—not COVID-19—or could be a false positive, he said. And even if a test result is accurate, it’s difficult to know what to do with that information.

“If someone is IgM-positive, they probably had [COVID-19] recently, but the lateral-flow test doesn’t tell them whether they are still infectious or how severe of a case they will have,” Blue said. “We hope—and you always hate to use the word ‘hope’ in the medical field—that IgG means you won’t get a severe form of the virus again, but we don’t know that.”

That’s because studies have yielded conflicting results, he said. In laboratory tests, monkeys infected with COVID-19 haven’t gotten a severe form of the disease again, but virologists can’t say that also applies to humans. And, unlike hepatitis B, Blue said, respiratory-based viruses—coronavirus being one—don’t always produce IgG antibodies that offer long-term protection against future infection.

“Flu vaccines can produce IgG antibodies, for example, but they can’t always prevent respiratory infection,” he said. “What they can do is send IgG antibodies into the bloodstream to neutralize the virus once it gets there.”

Blue added that if a patient with cardiac or blood-clotting issues receives an IgG-positive lateral flow test result, that could help doctors create a better treatment plan knowing the individual had had coronavirus.

“One benefit of lateral-flow testing is that it can pick up IgG long after molecular tests,” he said.

Blue recommended that everyone follow CDC advice: Consider yourself potentially infectious for 10 to 14 days after symptom onset, regardless of what a test result might say. And, most importantly, always consider yourself and others susceptible to the virus.

“I worry that people who test positive and think they’re immune may change their behavior and become part of the transmission cycle, because now they’re not washing hands or wearing masks,” he said. “Right now, people really need to think of others around them.”

Did you find that info on The View on ABC???

more jive for a fake pandemic freakout. you've been duped-----it's the flu.

Over 83,900 Americans and their families would disagree with you - as would anyone who works in a hospital or is rational.

Read an interesting article recently about conspiracy theories and those who believe and latch onto them.

Oh, you again. The one with no "off" switch. Because none of those sick or elderly people would have died from the flu or something else, right? Those are very distorted stats you keep referencing for those who paid attention in school. Give it a rest. You and your Libiot friends predicted our valley would be overrun with cases. You demanded tests. Yet, here we are. Life is moving along and we have almost no new cases or deaths. When will you stop being moronic?

Good to know up front that you’ve appointed yourself the arbitrator of who is expendable.

Unfortunately because of limited resources and an overwhelming number of people in need of ICU care, many doctors are having to make those decisions for real daily.

In our valley the daily/weekly documented Covid cases have gone down thanks to the majority of people who took the right actions for the right reasons. Hopefully we can keep this trend.

Wishing you a good life

Your comment about ICU care is about as ridiculous as most of your "perspectives". My girlfriend works as an ER nurse here in the valley and confirmed that exactly THREE people were in the I CU on ventilators since March 1st. If deception could fly, your "perspective" would need a runway.

Well, this is a surprise and a disappointment!

I raised the question of FDA/CDC approved back on April 26. For those that missed that post...

In a typical Hollywood stunt Inside Edition journalist/anchor Deborah Norville took the antibody test, which consists of drawing a small amount of blood, at the same time her daughter who she thought may have contracted the virus after attending Mardi Gras in New Orleans also took the test. The results are in they both have or had Covid-19.

Oh, wait a minute neither Norville nor daughter have Covid-19. It appears Norville’s test kit was not FDA approved. There are only four FDA-approved tests made by these companies Cellex, Chembio Diagnostics Systems, Ortho Clinical Clinical Diagnostics and Mount Sinai Laboratory.

Hate to report but this was VERY mismanaged from the beginning!!

We booked our appointments, drove up from BV with high hopes only to come to a locked door....no one answering phone....no email response. Not one peep!!

I hope this gets to re launch soon because it is in theory a great idea...forget about the wasted gas.

Anyone who tested positive with one of these tests will need to have an actual blood test to confirm results. These rapid tests, unfortunately, are wildly inaccurate and useless.

It would have been nice if they had notified individuals who had appointments.

Thanks a lot Trump you stupid idiot.

Weijia Jiang is that you? You sure get around.

you mean... thanks a lot CDC you stupid idiot.

Isn't there a Klan rally you need to go to Joe Bob.

Isn't there a Race Baiting CNN "PROGRAM" You need to watch Caramel Popcorn.

opps you mean.... Thanks a lot CHINA you stupid idiot.

No. Trump disbanded the Pandemic team and has killed Americans.

How many Americans did Nancy and Andy kill, carmex? 'Come to Chinatown'! 'Ride the subway'! We need a TDS vaccine.

TDS vaccine would be very beneficial for:

Your brain is broken. #sad

Too bad, Another defective, 'TDS' is already appropriated - 'Trump Derangement Syndrome'. It's a mental disorder, only in the liberal. You'll have to come up with something new to bash the Trump supporters, if your brain is capable.