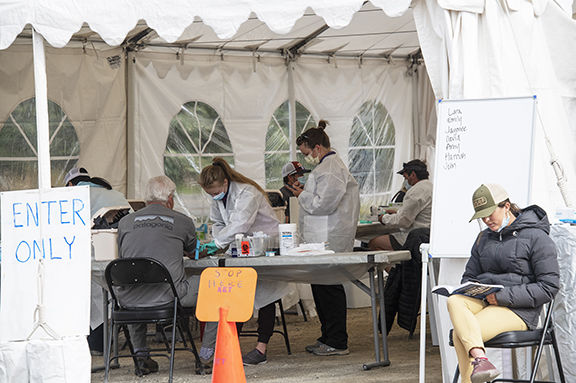 Tuesday, May 12, 2020. Antibody testing at the YMCA parking lot in Ketchum.

As Idaho enters into its third phase of reopening—with bars and movie theaters permitted to open beginning May 30—public health districts are warning that a second wave of the novel coronavirus will be inevitable and continue to encourage proper health and safety measures to prevent a dangerous surge in COVID-19 cases.

South Central Public Health District Public Information Officer Brianna Bodily says a second wave cannot be avoided, and that the next round could be more severe than what we’ve seen so far.

“Prepare for a wave that was worse than the first one,” Bodily told the Mountain Express on Friday.

Public health districts follow guidance and recommendations from the Centers for Disease Control and Prevention and the state. Those guidelines have changed rapidly, sometimes multiple times in one day, as more information is discovered about the virus almost constantly. Due to these continued developments, planning as far out as the fall is near to impossible, according to Bodily.

“We’re all anxious for things to get back to normal,” Bodily said. But, she added, until a vaccine is created, approved and widely distributed, what was considered normal pre-pandemic is still a longways off. Currently, experts predict a vaccine to be available by the beginning of next year. That leaves businesses, school districts, hospitals and individuals to prepare to live in some state of restriction for at least the next six months.

Initially, most residents were on board with following restrictive measures, Bodily said. That has changed in the past couple weeks. Some people reached through the Health District’s contact tracing investigations have been resistant to following guidance, including recommendations to self-isolate for 14-days after exposure, according to Bodily.

“The longer we resist, the longer we’re going to have to fight this disease.”

“They really want life to go back to normal,” she said. But for now, the safest way to protect the community is by taking precautions and implementing the measures championed by the CDC and health officials, like social distancing, scrupulous hand washing and wearing face masks when out in public.

By incorporating these little measures into day-to-day life, these will eventually become habits that may better protect the population in the long run, Bodily said.

Idaho looks to be on the decline of its first wave. As of Friday afternoon, 44,511 Idahoans had been tested for COVID-19. During the week spanning May 17 to May 23, 4,960 people received tests statewide, and 4.3 percent came back positive, according to the state’s coronavirus website. That’s a significant drop from the state’s peak during the week of March 29, when 7 percent came back positive. However, wide-scale testing is still underway, with at least three food processing facilities across the state conducting cluster testing after a significant number of employees fell ill, driving up caseloads in the South Central Health District.

Right now, it is still too early to give any guidance for August, when schools are scheduled to reconvene for the 2020-21 year. South Central’s lead epidemiologist has been in contact with school districts throughout its eight-county jurisdiction, Bodily said, but only to offer guidance. Those recommendations will depend on when the second wave of COVID-19 cases comes and how citizens handle it. It will ultimately be up to individual school districts to decide how to proceed come fall.

If the second wave comes at the same time as flu season—which typically ramps up in November and peaks in January/February—it could mean hospitals will face a significant surge, potentially making it more difficult for health care to keep up with demand. That could make the second wave worse than the first, which came towards the end of the 2019-2020 flu season.

Bodily said the most important thing businesses can do, particularly those that have employees who interact with the public in their job capacity, is to implement a plan to protect employees and customers in the event they’re exposed to the virus. Masks only work if both parties are using them and leave policies need to be flexible to allow for employees to stay home when sick or awaiting test results. In addition, a plan should be in place for how to handle other employees who may have worked closely with a co-worker who has tested positive.

“There has to be some level of reality,” Bodily said, and business owners should expect at least one of their employees will contract the virus if they haven’t yet.

Residents also need to make their own plans. Family emergency contacts should be updated, and supplies need to be available in the household in the event that one should suddenly become ill and can’t get to the store. And, Bodily said, people should be taking a close look at their finances and figure out a way to put some money aside in case they fall ill.

As the economy spools back up, community members should continue to take measures to remain healthy and safe, including when they do decide to leave their homes and where they go, according to Bodily. On example: If someone walks into a restaurant or store and notices those inside are not following proper social distancing protocols, they have the power to walk out and go elsewhere. Blaine County was somewhat of a gold-star county, Bodily said, when it came to community buy-in to follow mitigation measures and protect themselves and their neighbors from further infection but, “We are far from the end of this fight,” Bodily said.

“People have the most power to protect their health,” she said. “The longer we resist, the longer we’re going to have to fight this disease.”

"Dr. Anthony Fauci says a second wave of coronavirus is ‘not inevitable’." Yup, that was last Monday on CNBC. Now according to our local experts the second wave will be worse than the first. I guess that is a better headline? Still looking for the headline reporting the CDC's announcement this past week that the death rate for Covid is now figured at .03% for the country. Or that according to the CDC 69 young people (0-24) have died in the US from Covid. In the same time that same demographic has had 131 deaths to the flu. (As of last week) Lets back away from the panic button, get kids back in school were they belong, and take care of those who have pre-existing conditions. We are getting this thing figured out and it is not the big bad monster that we first thought it was. The facts are helpful. That is data. Look at and report all the science please.

due to the absolute bias of this "newspaper" you can only possibly get one side of things. we find this paper good for things like for sale items and garage sales is about it as far as ACTUAL facts.

Lots of maybes and if’s. Get a dart board, spin the wheel.....whatever. A little over 4% of the newly tested and during the height only 7%. Why would you not resist if your family is in danger of bankruptcy?

Lots of ifs because it's dependent on how people act since people are the vectors of the virus. It's not a matter of resisting it's a matter of adjusting, but I know using words like resist lets you develop the anger that you naturally seek.

How about O'riellys auto parts in Hailey where none of the counter help wears a mask or gloves yet they are all over the merchandise and customers at check out. They are in close contact with 100's of people a day. The credit card machines don't work properly so that adds time and congests the check out area. Any company that so disregards their duty to the public and their own employees needs to be avoided.

And if my aunt had balls she'd be my uncle. So what... jump in a casket now or wait a while

Given this sentence within the article, "During the week spanning May 17 to May 23, 4,960 people received testes [sic] statewide", your aunt may be in luck. :-)