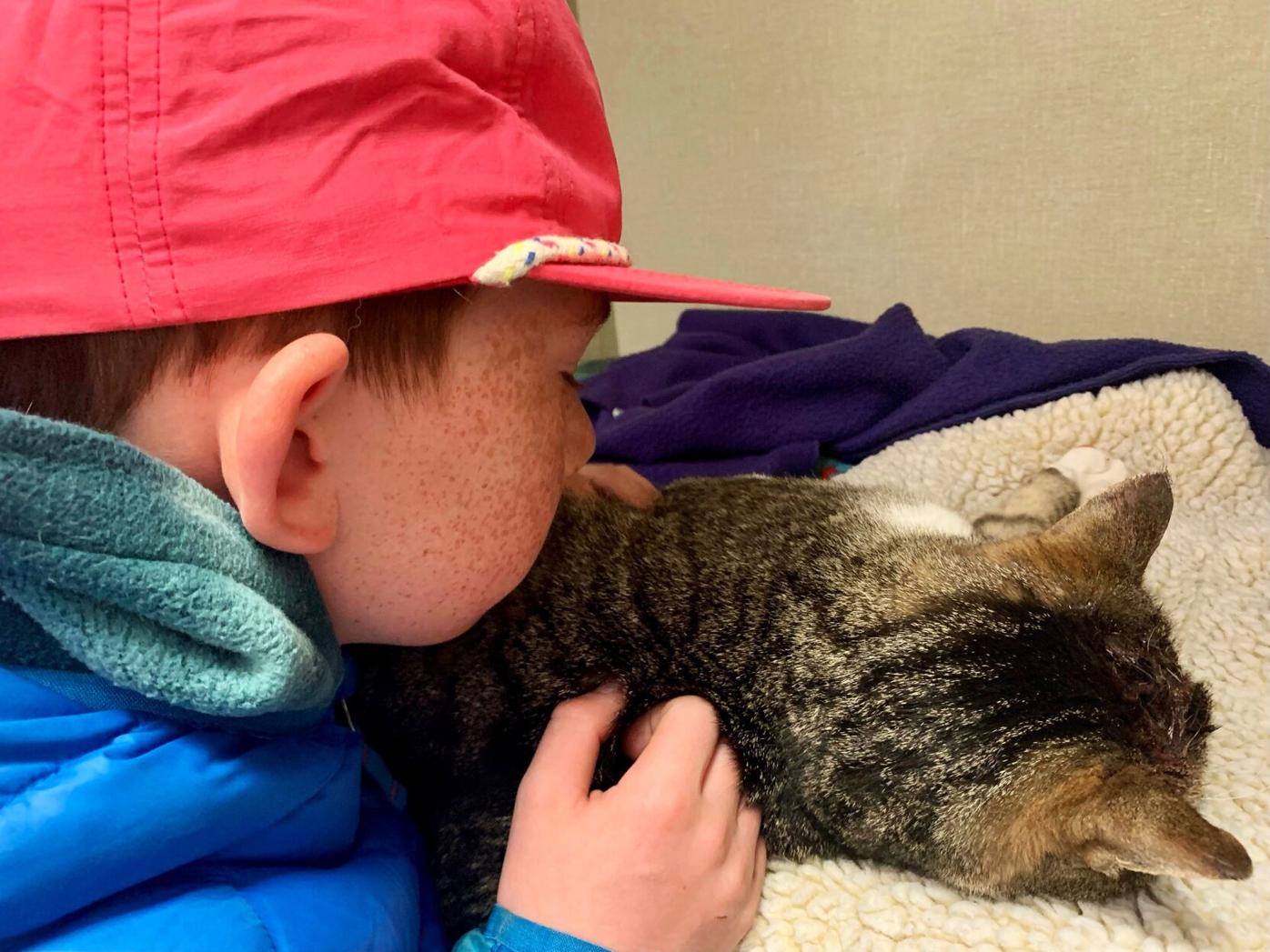 The Chizum family bid farewell to their seven-year-old cat, “Chunk,” on Sunday, April 17, following a mountain lion attack in Hailey. “He was the sweetest,” Susan Chizum said. 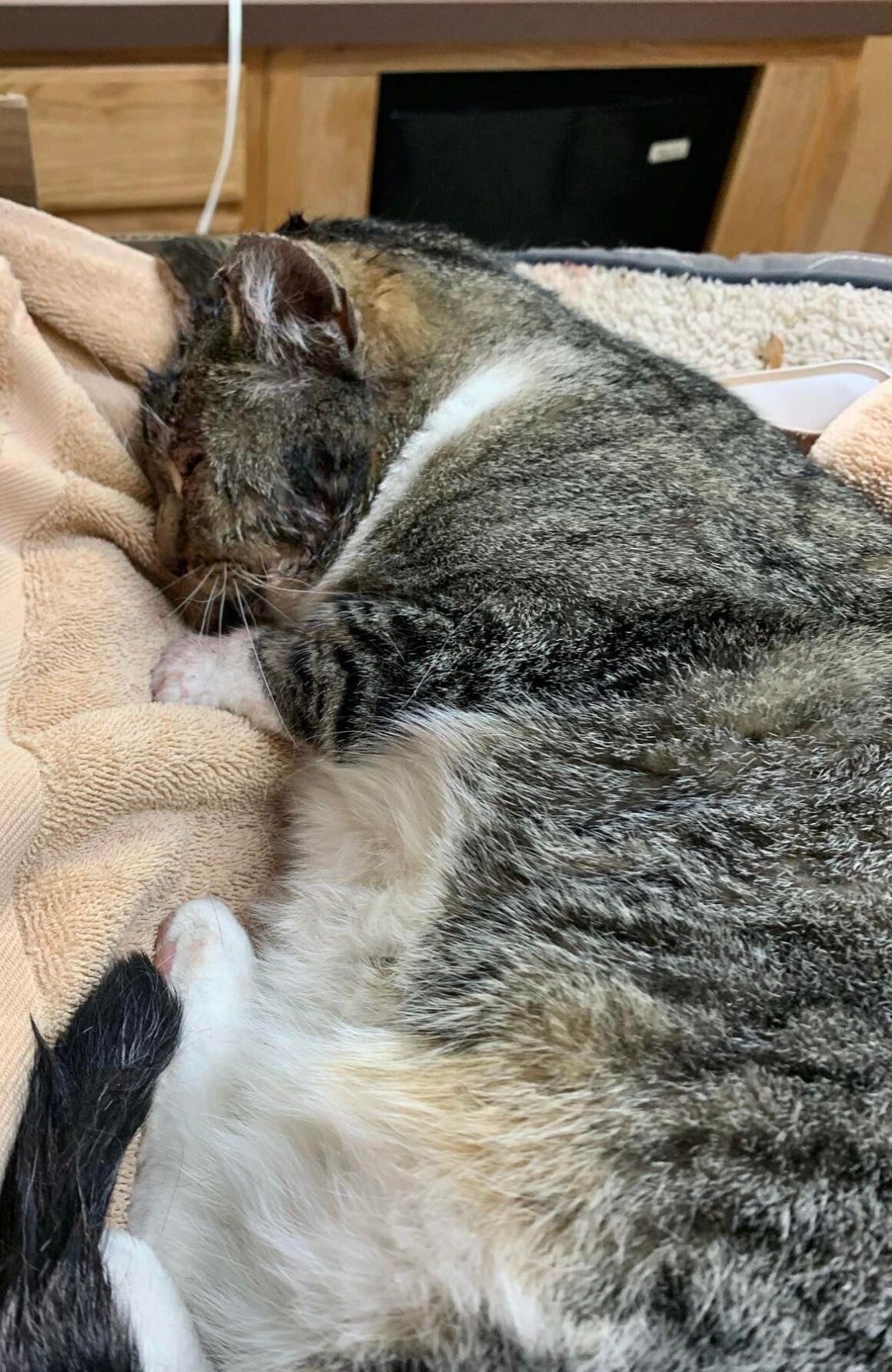 A mountain lion strolls through Hailey’s Buttercup subdivision in the early morning hours of Thursday, March 17, 2022. “Lions inside city limits and laying in front yards of homes just three blocks from downtown Hailey is not normal lion behavior,” Fish and Game spokesman Terry Thompson told the Express last month, around when residents began to report a large mountain lion wandering through town.

Officers from the Idaho Department of Fish and Game are planning to trap and euthanize a large mountain lion in Hailey that reportedly killed at least two domestic cats in recent weeks, the department announced Monday.

Thompson said the lion will be euthanized out of concern for resident and pet safety, as well as its own.

“Relocating mountain lions (predators) is not something the department does by our established guidelines,” he wrote in a Monday email. “Another factor is that lions are very territorial. While it may seem to some that relocation is an option, we have to realize that if we put another lion into another lion’s territory, the odds are high are that one of them will be killed.”

Since mid March, Hailey residents have reported seeing what Fish & Game officials presume to be the same large mountain lion wandering through various neighborhoods, from China Gardens and Little Indio subdivisions along the Big Wood River to Buttercup subdivision on the northeast side of town.

In late March, a large lion was sighted in Old Hailey walking toward the BCRD bike path, seemingly unafraid of two onlookers.

“Fish and Game biologists are concerned that this particular lion is becoming habituated to living within the community,” Thompson stated in a Monday press release.

According to Susan Chizum, a China Gardens resident, her family’s outdoor cat, Chunk, became the latest victim of a mountain lion attack on Saturday.

Chizum said she found Chunk on a neighbor’s porch around 10:30 a.m. that morning, suffering from a skull fracture, “two side-by-side” puncture wounds through his skull and multiple other puncture wounds on his face and eyes. He’d been attacked earlier, around 2 a.m., in another neighbor’s front yard, she said, based on yowling noises that the neighbor had heard.

“He had major trauma, swelling in his throat,” she told the Express.

On Easter Sunday—24 hours after finding Chunk and rushing him to the Sawtooth Animal Center in Bellevue—the family made the hard call to say their goodbyes while he was under anesthesia. Chizum said Dr. Laurie Breedveld had offered to install a metal plate in the cat’s skull, but there “was no guarantee” he would come out of surgery without brain damage.

“Chunk was seven years old and lived a beautiful life,” she said. “Someone made a comment that we shouldn’t complain if we leave our pets out. I’d like to think that we gave [Chunk] the best life we saw fit.

“I’m devastated with how his life ended,” she added, “but I think he got to live his best cat life.”

When asked about Fish and Game’s plan to trap the lion, Chizum said she was on board with the decision as long as the animal was the “same cat that has attacked the others [pets].”

“We just want to know our families are safe,” she said. “But to euthanize ... I think the tricky part is knowing if there is one mountain lion or five mountain lions at play.”

Chunk’s death was “heartbreaking,” Chizum concluded, “but I know we live in their [mountain lions’] neighborhood—not the other way around.”

Two other mountain lions have been found deceased or in poor health lately, according to Fish and Game—one “malnourished” young adult mountain lion found dead in Hop Porter Park on or around April 7, and a “young, abandoned” 30-pound mountain lion kitten found near death in the lower Broadford area near Bellevue over the weekend.

Thompson said the department euthanized the kitten because it also showed signs of malnutrition when examined by local conservation officers. The kitten has since been sent to the Fish and Game wildlife lab for testing, he said, noting that rumors of “possible feline distemper” have not been confirmed in either animal.

The kitten is the sixth mountain lion that Fish and Game officers have euthanized in the Wood River Valley in the past four years, and the only euthanasia unrelated to human-lion or pet-lion conflict.

"I know we live in their [mountain lions'] neighborhood—not the other way around.”

In 2018, the department euthanized an older female mountain lion in Gimlet that had attempted to kill a dog and a young lion at Friedman Memorial Airport that had delayed a commercial flight by sitting on the runway. In 2019, officers euthanized two mountain lions in the Warm Springs area of Ketchum after the animals attacked and killed residents’ dogs. In 2020, officers shot a large male lion in Hailey’s Woodside subdivision due to the animal’s proximity to children. No lions were euthanized in the Wood River Valley in 2021.

According to Fish and Game, any mountain lion encounters should be reported to the Magic Valley Regional Office at 208-324-4359 during business hours, or the after-hours line at 800-632-5999.

Regional Conservation Officer Clint Rogers encouraged residents to also call Fish and Game if they find mountain lion tracks around their homes or come across caches—or carcasses covered in grass, leaves, and other debris.

“Our officers are always willing to work with local residents to make sure that they and their pets stay safe,” Rogers stated in a Monday statement. “Our goal is to encourage mountain lions to live in wild habitats, outside of our communities.”

"Our goal is to encourage mountain lions to live in wild habitats, outside of our communities."

To keep the predators away from city limits, Fish and Game is urging all valley residents to close up sheds, under-deck hideaways and other potential “daybed” spaces, and better secure their garbage to avoid attracting skunks, raccoons and other easy prey for mountain lions.

The department is also asking residents to practice the following safety measures:

Leave the mountain lion alone. He is doing us a big service by eliminating stray cats. People have it in their mind set that it is okay for cats to roam. Not So. Fish and Game (squirrel and guppie Department) have said that cats kill game birds in large numbers. You have the right to have a cat, but not on my property.

An ignorant state increasingly occupied with incredibly ignorant people. F & G continues to be an evil enforcer of the states’ ignorance. From P & Z

To the governor, what an embarrassment to the country. Beautiful state, ugly people.

You just said a mouthful.

While I am fully sympathetic to those have lost pets, I find this approach of killing mountain lions (esp to the degree that we are killing them here) HIGHLY concerning. The reason they are coming into town is likely due to imbalances in their ecosystems (probably due to climate change factors). This is so beyond irresponsible in terms of harming our already fragile ecosystem. As someone else said above, the odds of a lion surviving if re-located are a lot better than the 100% odds of it dying here in town. Just take the time to tranquilize and relocate. That should always be the priority. ESP in that case at the airport. Why didn't they tranquilize it? Absolutely insane. I"ll be contacting Fish and Game with my concerns about this policy. It's bonkers.

Have Idaho Fish and Game be like, Kitty Uber drivers. Give them a lift back to the mountains after a hard night on the town?

If only they’d kept their cats indoors like responsible owners.

Relocate = less than 100% probability of death

Why aren't we relocating?

Why are we promoting irresponsible pet people ????? Pet owners are required to keep their pets within their own responsible areas under control ! This is a outrage and no different than what other areas are doing to protect their livestock with wolves ! But Blaine county is one of the biggest hypocrites when it comes to wildlife responsibility. And when are people going to get it that Idaho Fish and Game saves NOTHING??? People STOP calling them ! Shame on you Blaine county !!!! These poor animals are in the midst of litters and you are promoting cats who do more wildlife damage to be out whenever ! Stop sterilizing our natural river areas .

i know for a fact a lady who lives between little indio and northstar subdivision/angela drive has been GRAIN FEEDING 6 impressive male elks for their antlers for a minimum of 2 years, we also have it on video.the cat finally showed a few weeks ago looking for them....this kind of nonsense has to stop. her altler collection is not worth peoples best friends

posting that here is a waste of time. can you send it to the Blaine County Sheriff's Office?

Perry she can do what she wants . There is no law that says you cannot feed elk or deer . Do your homework .

My bad. I just couldn’t fathom that it’s legal to treat wild animals like personal livestock. But your point on pets is a good one.

Also Perry and not trying to be nasty here but , never take the word of someone in this valley without investigation . I’ve been the victim of many so called “so gooders “ who are just Karen’s trying to anthropomorphise what their reality is or is not . Maybe the lady just happened to give them some grain as many people feel bad for the elk in harsh winters since we now have taken all their winter habitat . Maybe they dropped their antlers in her yard . Great ! Fair exchange . Now if she was sawing them off that’s another issue .

this is a truly uneducated comment from a person who fancys themselves an idahoan. of coure it is illegal to bait in wildlife of any kind...seems it may be the only way you know how to hunt. F&G has been called perry and showed the video .you really need to think about what you preach elkhunter or change that handle to elkpoacher

Who/what do you think is most to blame for high inflation in the U.S.?