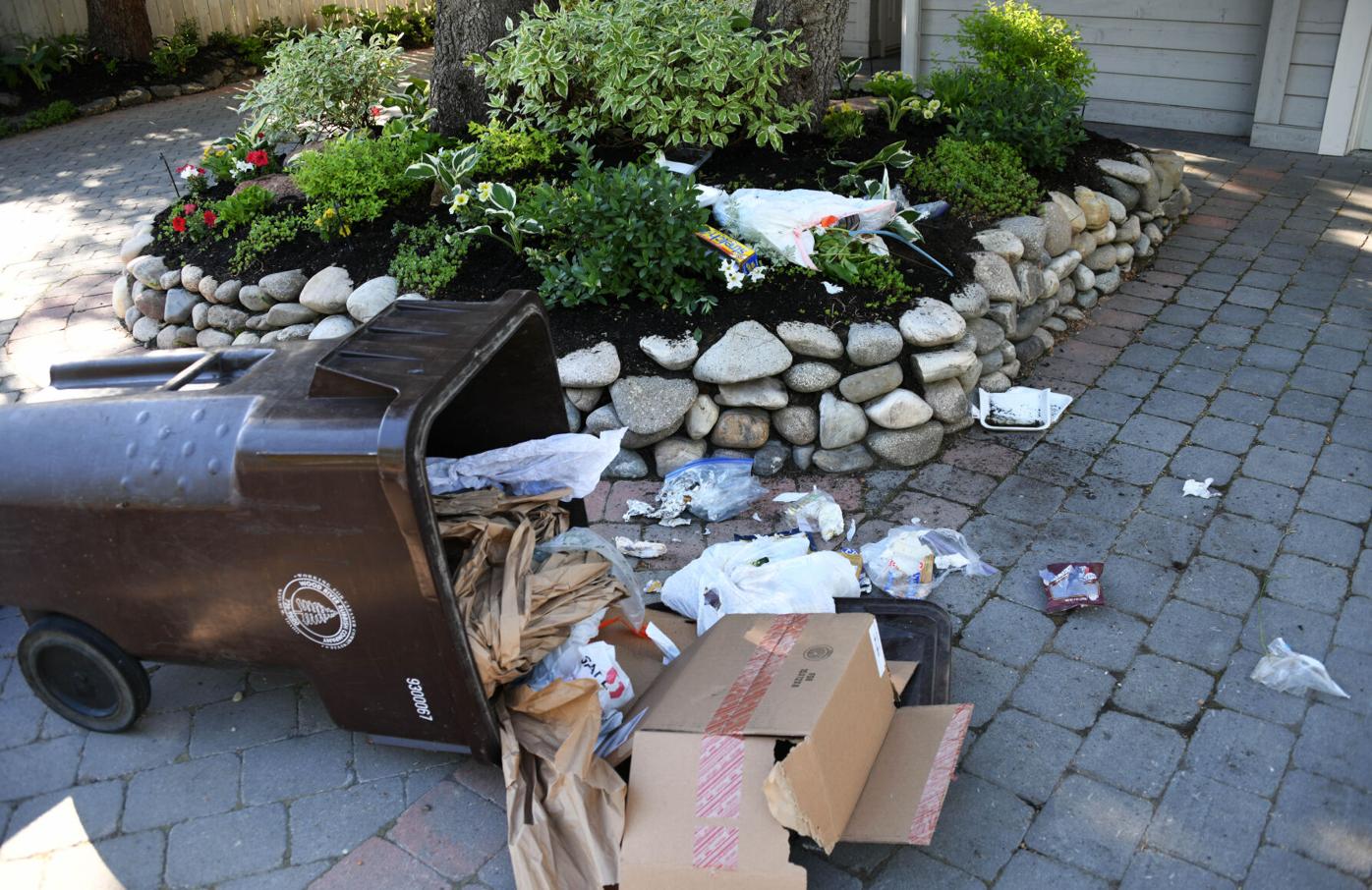 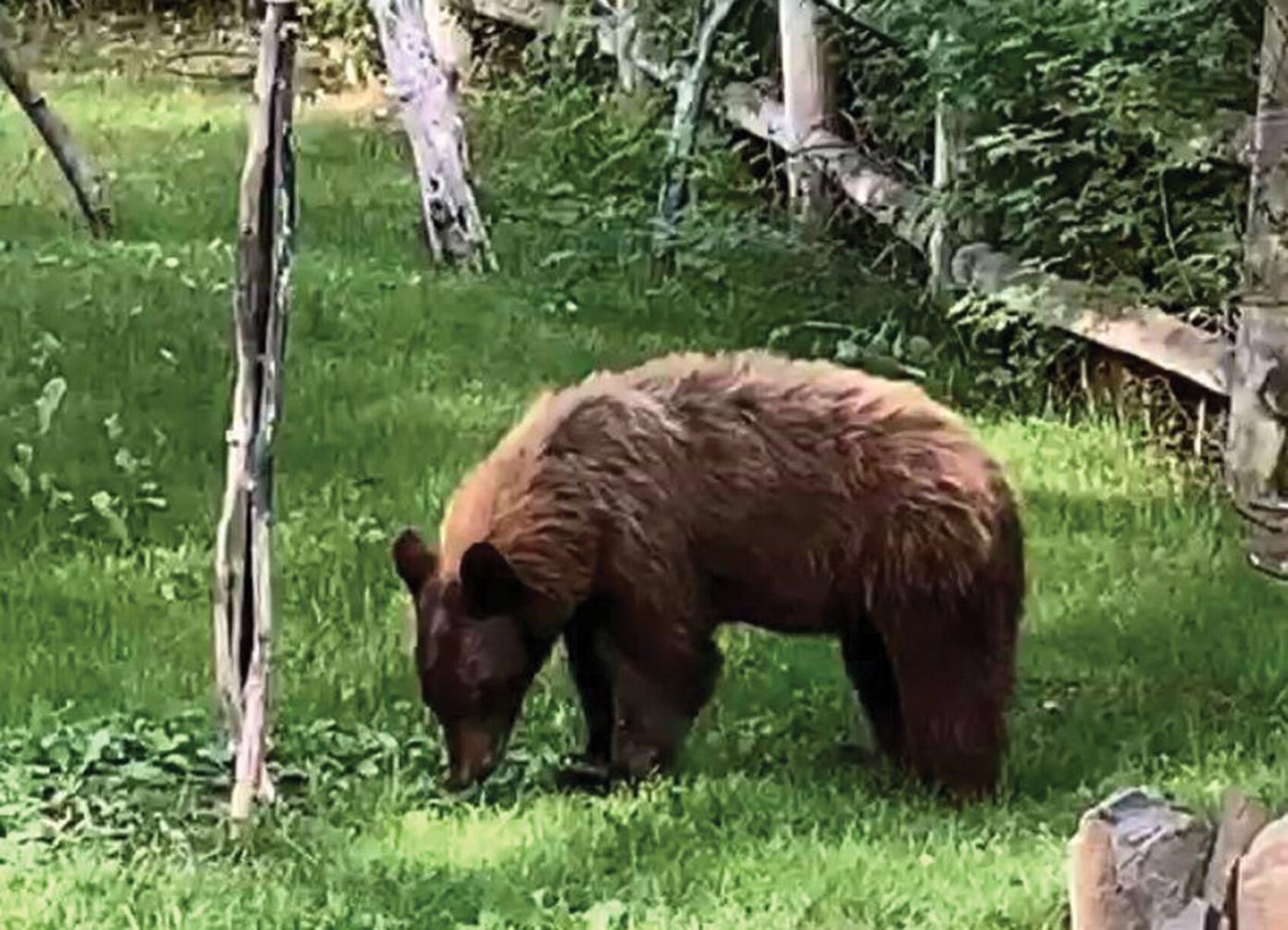 Fish and Game euthanized this young black bear on Aug. 3, 2020, after it established a pattern of eating from garbage bins, bird feeders and beehives in an East Fork neighborhood.

Idaho Fish and Game officers are attempting to trap and euthanize a food-habituated black bear in the Warm Springs area of Ketchum that reportedly charged a resident in the early morning hours of Monday, July 11.

According to a statement from the regional Magic Valley office, a woman opened her door to verbally haze away the bear after seeing it rifle through garbage outside her home. The bear responded by charging at her, Fish and Game said.

“She quickly closed the door, and the bear collided with the door. The bear then charged a window as the woman banged on the glass in an attempt to scare the bear away,” the department stated.

The woman was unharmed and reported the incident to Fish and Game.

The incident marks the second case of an aggressive bear charge in the Warm Springs neighborhood in about a year and the third consecutive summer of hungry bears rummaging through unsecured trash in the area. It also follows two months of bear sightings in residential Ketchum, Fish and Game stated on Tuesday.

"The Wood River Valley has had persistent problems with bears raiding garbage cans."

In June 2021, another female resident was charged at by a large sow while walking along Bald Mountain Road late at night. The resident ran, contrary to Fish and Game advice, and was cornered by the bear on a porch. After the woman’s desperate shout for help, the bear, inexplicably, stopped short, woofed and retreated into the dark. The agency’s attempts to capture the bear with a barrel trap in the following days were unsuccessful.

Garbage problem years in the making

At the time of the 2021 incident, “streets were lined with garbage carts prior to pick-up the next day, which frequently attracts black bears into neighborhoods,” Fish and Game stated. On Monday morning, too—hours after the reported incident—trash cans could be seen, some filled to the brim, outside Warm Springs garages from Bald Mountain Road to Broadway Boulevard.

“The Wood River Valley has had persistent problems with bears raiding garbage cans and finding other sources of food at or near homes,” Fish and Game spokesman Terry Thompson said.

In August 2020, the department reported that the same large sow was pawing through garbage cans along Irene Street and teaching her cub to do the same. Euthanasia was proposed, but called off that summer.

Regional Wildlife Manager Mike McDonald said that the Fish and Game’s Magic Valley office did not have verified information on the age and sex of the bear involved in Monday’s incident, and there was no indication that the current “problem” bear is the same bear from the past.

As of Thursday, the agency was using a live culvert trap to attempt to capture the bear. If caught, it will be trucked out of town on the back of a Fish and Game patrol car and euthanized in a quiet spot.

Thompson said that Idaho Fish and Game has a policy of not relocating black bears that wander too close to homes and eat from trash cans because the bears “will return in 80% of cases” and, in the other 20%, “will become someone else’s problem.”

"If a black bear charges and attacks you, fight back with everything you have.”

“No one wants to see wildlife harmed, but we have no tolerance for bears that are aggressive toward people, or repeatedly return to homes and neighborhoods in search of food,” he stated Tuesday. “If we are able to trap this bear, our only option is to euthanize it. We can’t risk public safety on account of one animal that has developed a bad habit of roaming neighborhoods in search of food. We want wildlife to remain wild, but unfortunately, when there’s bear food in the form of garbage or other attractants, bears will follow.”

Several other state wildlife management agencies in the West—Wyoming Game and Fish, Colorado Parks and Wildlife, Alaska Fish and Game and Arizona Game and Fish, to name a few—will consider relocation as an option for food-habituated black bears. So will the Pennsylvania Game Commission and Connecticut Department of Energy and Environmental Protection, according to agency reports.

At least five black bears across the country have been relocated away from populated areas this month, news reports indicate.

Earlier this month, regional Fish and Game officers planned to trap and euthanize a black bear that was interacting with campers along North Fork Road over the Fourth of July weekend.

The bear was reported wandering between dispersed campsites along North Fork Road behind the Sawtooth National Recreation Area headquarters north of Ketchum and reportedly damaged camping gear and attempted to break into vehicles in search of food.

Another bear frequented Baumgartner Campground in the Sawtooth National Forest’s Fairfield Ranger District over the holiday weekend, drawn to the area due to overflowing dumpsters, Fish and Game said.

The bear in the SNRA this month prompted a campsite closure at North Fork Campground area to ensure camper safety while Fish and Game had a culvert trap set, but McDonald said officers pulled the trap over the weekend due to a lack of bear activity in the area. All campsites at North Fork are now open, according to Forest Service spokeswoman Elizabeth Wharton.

“No one wants to see wildlife harmed, but we have no tolerance for bears that are aggressive toward people."

According to the National Park Service, black bears may use ferocious but non-dangerous “bluff charges” to intimidate potential threats—a behavior marked by puffing themselves up to look larger and bounding on their front paws in large leaps, but then stopping short or veering off to one side.

“Often bears retreat after a bluff charge, or they may vocalize loudly,” the agency states on its website. “If you can see a bluff charge is about to happen, slowly back away while waving your arms above your head and speak to the bear in a calm voice … do not run during a bluff charge [as] it may trigger the bear to attack.”

An “aggressive charge” from a black bear, on the other hand, requires the person being charged to fight back at all costs with bear spray, sticks or stones, the agency states. This type of behavior generally includes several warning signs such as yawning, clacking teeth, huffing and pounding front paws on the ground and, if those signs are ignored, cumulates in a direct “freight train” charge in which a bear will not veer off path.

“Aggressive charges are very dangerous … If a black bear charges and attacks you, fight back with everything you have,” the National Park Service states.

Fish and Game officials are asking anyone “who sees or finds evidence of” a food-conditioned bear in Warm Springs or west Ketchum to make a report at 208-324-4359.  

"Aggressive Warmsprings Bear?" Turns out she has two young cubs. Don't worry Ketchum humans. They will all be dead within the hour. You can all go back to your normal lives now, leaving trash out with impunity because those scary bears won't bother you any more. At least until the next one comes along. Way to go F&G.

City of Ketchum! Can we PLEEEASE change this cruel scenario that plays out EVERY YEAR?!!!!! Bear-proof trash receptacles are the only option. Don't we have a record budget surplus this year? C'mon. Don't just keep killing our wildlife mamas and babies because you don't care enough to solve the basic problem.

I'm missing any culpability on the residents who created the problem. $$ is there only way to get people to change this kind of totally reckless behavior. Can't we just fine anyone who puts the garbage out before the morning of pickup? $500 outta do it.

Thank you for such an informative article. It is worthwhile to note that other states don't necessarily euthanize their bears but relocate them. Idaho F&G. Want to rethink this? Or plan for the next year and next year. Can't there be some way that the campgrounds and North Valley get bear proof cans? Other places have done this too. Why can't we?