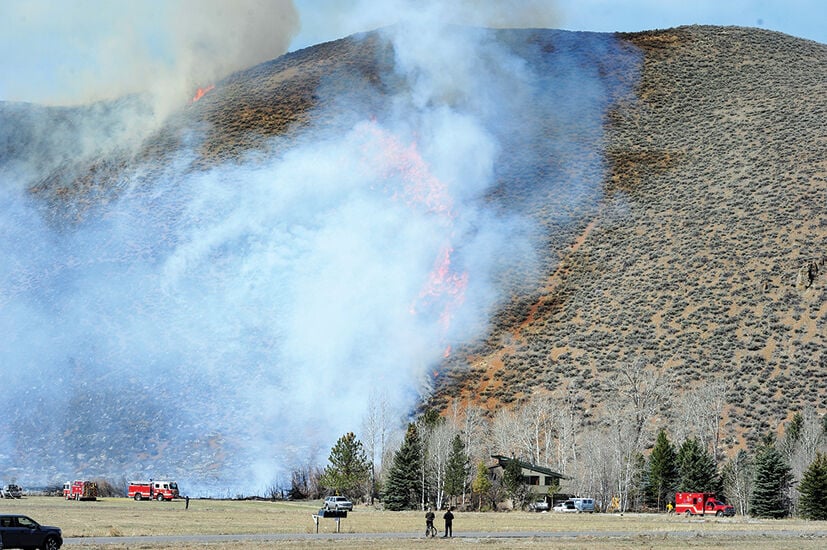 Blaine County saw an early preview of fire season in April, when around 40 firefighters responded to a human-caused blaze in Indian Creek. 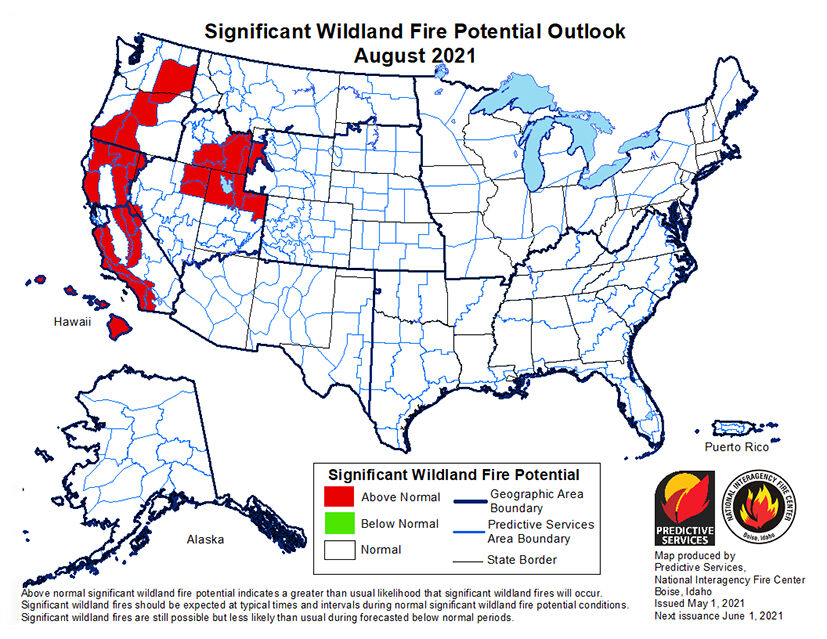 Blaine County, classified by the National Interagency Fire Center as part of the country’s Great Basin region, can expect to see elevated fire risk in late June, July and August due to ongoing drought.

Despite some recent precipitation, Blaine County and much of the western U.S. will not get a reprieve from high fire danger this summer, according to two wildfire forecasts published this month.

In a report issued May 1, the National Interagency Fire Center projected “significant wildland fire potential” for the May-to-August wildfire season across the West.

Central Idaho, classified by the center as part of the Great Basin region, can expect to see elevated wildfire danger in late June, July and August, it said, due to ongoing drought, below-normal snowpack at high elevations and potential lightning events.

Blaine County joins a large belt of Western U.S. states, including Utah, California, Nevada and Colorado, in severe-to-exceptional drought. Most of the county’s northern half falls under “severe” drought, according to federal monitoring by the National Oceanic and Atmospheric Administration. Northeastern Blaine County, including Trail Creek Summit and the Big Lost drainage in Custer County, are experiencing “extreme” drought, NOAA’s second-worst classification.

A report issued May 5 by worldwide forecasting service AccuWeather predicted that “dangerously dry conditions” in the West’s severe-to-exceptional drought areas will result in wildfires consuming 9.5 million acres of land this summer and fall.

“Unfortunately, in a nutshell, it looks like it’s going to be another busy season,” AccuWeather Senior Meteorologist Dave Samuhel stated. “We’re seeing a lot of drought. Almost half of the country is experiencing drought, and the bulk of that is to the west.”

Springtime fire activity has remained low in central Idaho and the Great Basin region due to La Niña-driven cold fronts and precipitation, the report states. But La Niña—a weather pattern marked by cooler sea temperatures in the tropical Pacific—is weakening, according to the National Interagency Fire Center, meaning that warmer, drier conditions are ahead.

Samuhel said fire activity isn’t typically observed in “places like Washington state, Idaho and Montana” until late July, but residents should still be on alert due to underlying drought.

Ahead of wildfire season, some of the country’s top fire experts assembled over Zoom last week for a panel discussion, “America’s Fire Fix: A Deep Dive Into Solutions,” hosted by The Nature Conservancy.

“We really face a new reality in which millions of acres can burn in a single week, residents are sent fleeing and you have enormous plumes of unhealthy smoke,” said Marek Smith, the organization’s North America fire director. “We’re dealing with ever-increasing firefighting costs, lost habitats, lost livelihoods. We really need to bring natural areas back into balance with fire and transform communities into places where people are able to live with [fire], rather than fighting it at every turn.”

Kelly Martin, retired chief of fire and aviation at Yosemite National Park, agreed. One of her goals is to improve public perception of prescribed burns, she said.

“We have an incredible backlog of unmet need for fire on the landscape. We’ve been suppressing fire now for 100 years,” she said. “It really takes a local effort for people to understand [the benefits] of prescribed burns, accept some smoke … because in the long run we know this will help prevent wildfires.”

“We really face a new reality in which millions of acres can burn in a single week.”

This is the perfect time to start BANNING all campfires in the BLM, SNRA, etc....