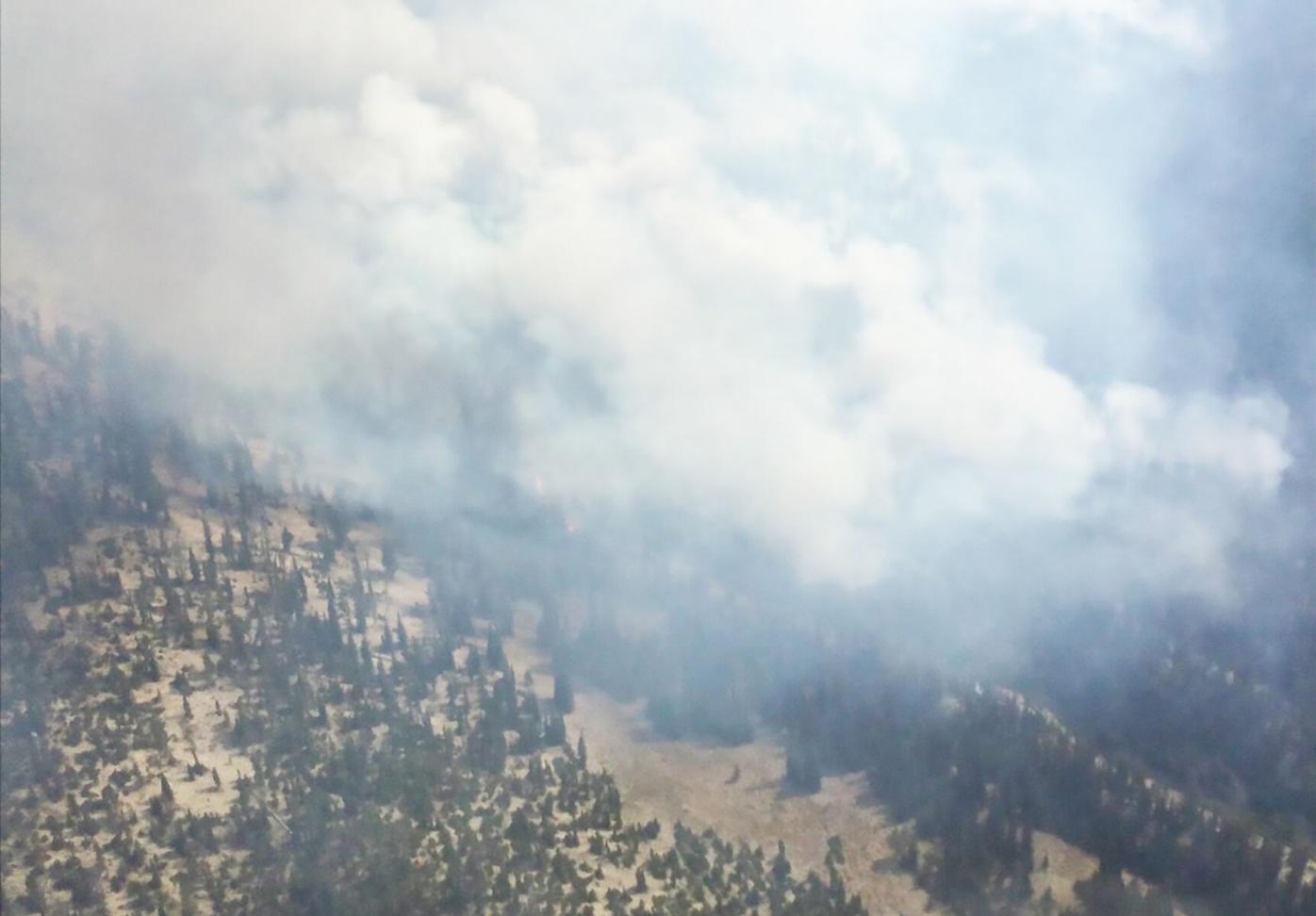 The Jakes Gulch wildfire is burning in steep terrain about 25 miles south-southwest of Stanley. The fire sent a visible smoke plume into the air on Monday, the National Weather Service said. 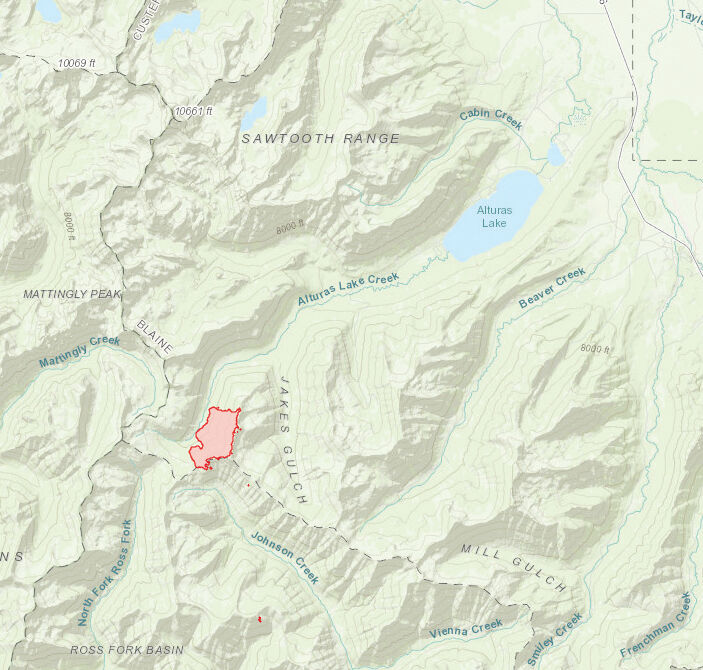 The Jakes Gulch Fire, outlined in red as of Sept. 7, is burning southwest of Alturas Lake. 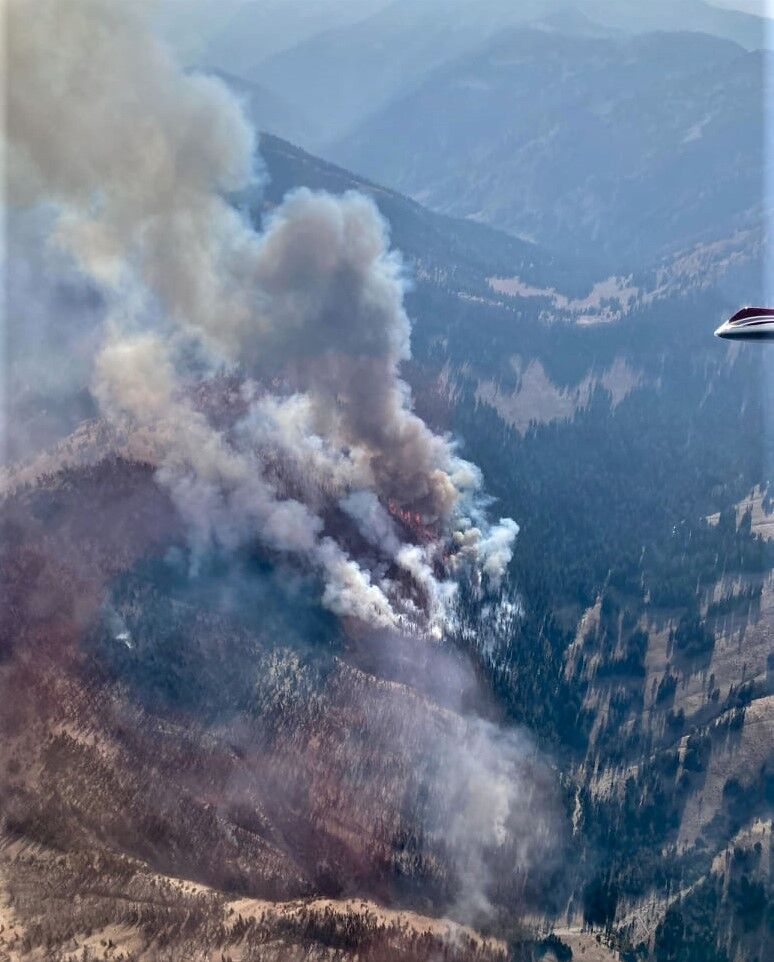 The Jakes Gulch Fire held steady around 360 acres on Wednesday after adding about 40 acres on its southwest edge Tuesday, according to BLM Fire Information Officer Ryan Berlin.

The fire has backed down towards Alturas Lake Creek Trail in heavy dead and down fuels, requiring crews to remove vegetation from the trail, Berlin said.

Earlier on Wednesday, the Sawtooth National Forest announced a closure order to aid ongoing firefighting efforts. All public access to Alturas Lake, Perkins Lake and surrounding campsites and trails has been closed until Oct. 30.

While conditions Tuesday and most of Wednesday aided efforts, stronger wind gusts from the southwest will challenge firefighters on Wednesday night and throughout Thursday, Berlin said.

“Tonight and tomorrow will be a big test for us,” he told the Express Wednesday. “We’re looking at above-normal temperatures and near-red-flag conditions on Thursday, with very low relative humidity.

A 330-acre human-caused wildfire that ignited Sunday afternoon in the Sawtooth National Recreation Area near Alturas Lake prompted the evacuation of hikers and campers on Monday and Tuesday.

The Jakes Gulch Fire is burning through lodgepole pine and subalpine fir stands near Jakes Gulch, about 3 miles southwest of Alturas Lake in Blaine County.

Hikers near the lake and campers at Alturas Inlet, Smokey Bear and other surrounding campgrounds were told to evacuate starting on Monday, according to BLM Fire Information Officer Ryan Berlin. Four nearby organizational camps were also evacuated, he said, among them the Camp Perkins Lutheran Outdoor Ministries camp along Perkins Lake, whose members were asked by the Forest Service to pack up and evacuate by Tuesday.

“Aerial resources are being used to assist those working on the ground,” the Forest Service stated on Monday. “Evacuation of campers and hikers is being conducted to ensure the safety of the public as well as fire personnel.”

Berlin said the adjacent Alturas Lake Trail was closed to the public Monday. Further road closures had yet to be announced as of press time Tuesday.

Dozens of wildland firefighters, including smokejumpers and a hotshot crew from Boise, had arrived or were arriving at the fire on Monday and Tuesday, Berlin said. Another hotshot crew was on the way from Navajo County, Arizona.

“We have smokejumpers trying to hold the ridgetop, and the Boise Hotshots are holding the Alturas Lake Trail right now,” Berlin said.

Containment of the fire is estimated by the end of the month, he said.

Dozens of wildland firefighters, including smokejumpers and a hotshot crew from Boise, were arriving at the fire on Monday and Tuesday.

On Monday evening, the BLM described the behavior of the Jakes Gulch Fire as “extreme” and with spotting and isolated torching. Spotting refers to the creation of small new fires beyond the initial ignition point due to wind-blown embers, while torching refers to the engulfment of a tree or group of trees, usually bottom to top. By Tuesday afternoon, however, fire growth was minimal due to a temperature inversion that had settled into the area, trapping cooler air and smoke in place, Berlin said.

“As long as the inversion lasts through the day, which fortunately it looks like it will, fire activity will be minimal,” he said on Tuesday. “I expect fire personnel on the ground and in the air to reach some containment.”

While classified as man-made, Berlin said the fire is still under investigation.

On Sept. 1, the BLM Twin Falls District lifted Stage 1 fire restrictions for rangelands and forest land in Blaine County, allowing the public to build campfires in areas managed by the BLM or state of Idaho. The Sawtooth National Forest, however, remained in Stage 1 restrictions.

Fire danger in the forest remained “very high” over the holiday weekend and on Tuesday as humidity percentages dropped to the lower teens and single digits across central Idaho.

Can’t believe we did this . Omg ‘Trail runner ‘ been shaking my head on that one since day 1 . We won’t be happy till we can burn it all down .

The BLM eliminated fire restrictions before one of the busiest camping weekends of the year? Who's bright idea was that? They should be fired! Fire restrictions are poorly understood in the first place and largely ignored here in the Sawtooth Valley. This is a recipe for disaster given the high fire risk throughout the Sawtooths. It's time to abandon the idea that a campfire is a God given right. An outright ban on ALL campfires from May 1 to October 1 is needed.

Can we get more LE Rangers on the Forest Service land? I feel like they could easily pay for themselves by writing up $5k tickets for not following fire regulations.

Nunya sadly the guys that were hired really were a “overreach “ in the law and doing things that should not have been instead of actually getting off the atv and getting up in there . They played “policeman “ for wood cutters and campers . And that got positions cancelled it’s a tough balance but it would help of the USFS we had actually did something other than drive around with Bicycles hanging off the trucks . We are really out of balance .