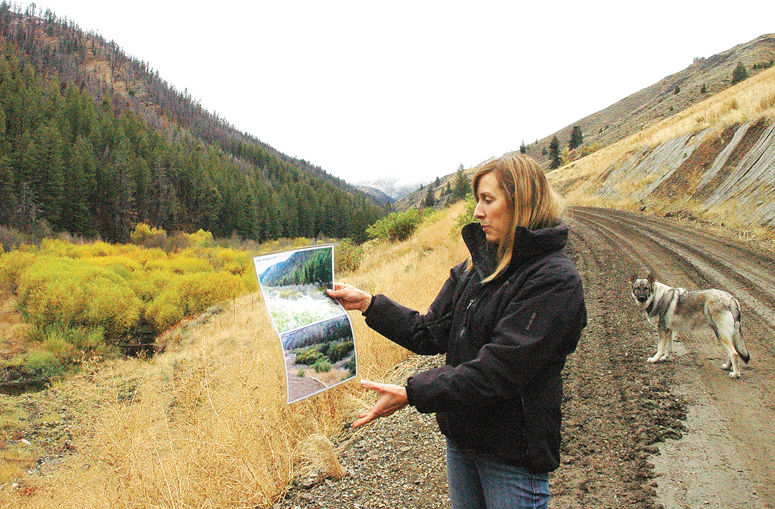 Five years after the Beaver Creek Fire, Ketchum Ranger District biologist Erika Phillips compares before and after photos of a newly built road during a tour of Deer Creek drainage on Wed., Oct. 10. 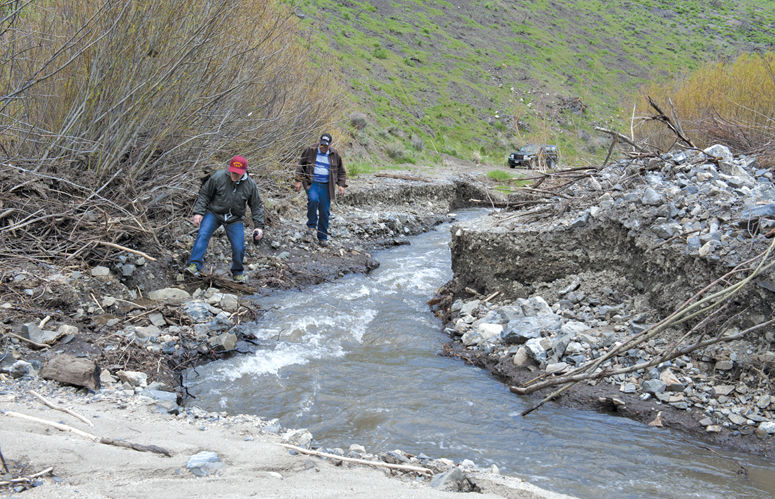 County Commissioner Jacob Greenberg and county Disaster Services Coordinator Chuck Turner assess damage in the Deer Creek drainage in the spring of 2014, after the 2013 Beaver Creek Fire burned much of the area, followed later by heavy rains and mudslides.

Five years after the Beaver Creek Fire, Ketchum Ranger District biologist Erika Phillips compares before and after photos of a newly built road during a tour of Deer Creek drainage on Wed., Oct. 10.

County Commissioner Jacob Greenberg and county Disaster Services Coordinator Chuck Turner assess damage in the Deer Creek drainage in the spring of 2014, after the 2013 Beaver Creek Fire burned much of the area, followed later by heavy rains and mudslides.

First came fire, then came flood, but five years after nature ravaged the Deer Creek drainage northwest of Hailey, the U.S. Forest Service and its local partners unveiled a $1.6-million restoration of the canyon Wednesday afternoon.

It took some help to get there.

Through Blaine County’s Land, Water and Wildlife Program, taxpayers committed $496,000 to the project, which rehabilitated floodplain, restored habitat, relocated 3,500 feet of forest road and rebuilt some 20 campsites and 28 miles of trails connecting the south valley to the extensive northern network.

This week brought an amiable end to a contentious process, as stakeholders and old opponents came together to tour the healing landscape.

“So many different interests have been addressed here—it’s remarkable,” said Commissioner Larry Schoen, who voted against the 5B Restoration Coalition’s request for county money to spend on the federal land in 2016. “There was controversy about the use of levy funds, and I voted my conscience. But, I don’t want that to be construed as lack of support for what everyone here did, and what they accomplished.”

The Land, Water and Wildlife contribution was the “catalyst” for the money that followed, according to Commissioner Angenie McCleary. The board’s liaison to the 5B Restoration Coalition, she supported bolstering its initial $188,000 with public funds.

“The county was integral to this from the beginning, right after we realized the impact of the [Beaver Creek] Fire and the rains,” she said. “Without the 5B Restoration Coalition, the Forest Service, the Idaho Conservation League being able to come to the county to ask for funding, I don’t think we’d have been able to leverage our resources into something on this scale.”

Seventy percent of the Deer Creek drainage was burned by the 2013 Beaver Creek Fire, according to Ketchum District Ranger Kurt Nelson. The rain that followed sloughed off the charred hillsides, destroying roads, trails and the streambed in the process.

“It was wall-to-wall water in here,” Nelson said, looking back down valley from the new trailhead, about 11 miles west of state Highway 75. “We had to build our way back. This project was kind of like a Rubik’s cube. It took time to find the right way to approach it.”

The Forest Service had already been studying Deer Creek prior to the fire. For years, it maintained an old mining road that followed the stream. The grade blocked the floodplain, and was frequently washed out—but, would have cost too much for the Forest Service to replace on its own, according to Nelson.

“We knew we had to put it back together after the fire,” Nelson said. “To me, it’s a community effort. That’s how we think about doing projects on public lands. Sometimes, we come up a little short on our green Forest Service money, and we need to come up with other ways to get things done.”

About $400,000 of the county’s money went to moving the road up to the toe of the hill. Other grants helped foot the bill for heavy equipment, which crews used to pull the old road, grade the new one, and remove debris from the floodplain.

Already, the former route is scarcely visible snaking through the orange brush along the stream.

“Ultimately, in the next five years, you won’t be able to tell there was ever a road through there,” said Erika Phillips, a biologist with the Ketchum Ranger District.

Now that the rocky debris is out of the channel, wildlife, she said, should follow.

Much of that gravel ended up substrate on the 20 designated campsites up the trail. On Wednesday, as deer season began in earnest, most we’re already filled with tents and trailers—a reminder of the area’s recreational draw.

“When the fire happened, people told me they were selling their bikes—there was no place left to ride,” said Chip Deffe, owner of Sun Summit South, a cycling shop in Hailey.  “Now, people—especially south valley people, Hailey people—are using these trails, big time. And, they’re loving it.”

There’s still a bit of work to complete, and some heavy equipment to move out, but those trails are open. Next year, they’ll likely see even more traffic—along with the vegetation along the upland hillsides.

“When the Castle Rock Fire occurred, there really wasn’t a role for the county,” Schoen said. “The Beaver Creek Fire, it was a whole different thing. The level of local involvement—I think it can be a model for what can happen when the federal and local government come together, develop a shared vision, and put it into action. It’s something I hope we can repeat—not just here in Blaine County, but elsewhere.”

Cutting up the mountain so radically can only result it more erosion and silt in the creek. The natural hillsides are now exfoliated rock and weeds, with a lame attempt to hold it back with netting. As Blaine County has helped fund the Army Corp of Engineer`s road work, to the tune of $500,000, the county road to get there is in total disrepair. This was a destructive fix to a natural process that will never be controlled. Road building in our National Forest is not a conservation effort.

Don't you love the "before and after" approach to selling the supposed success of the rehabilitation...duh, it looks better five years later.

I guess I will take credit for the sun shining today!