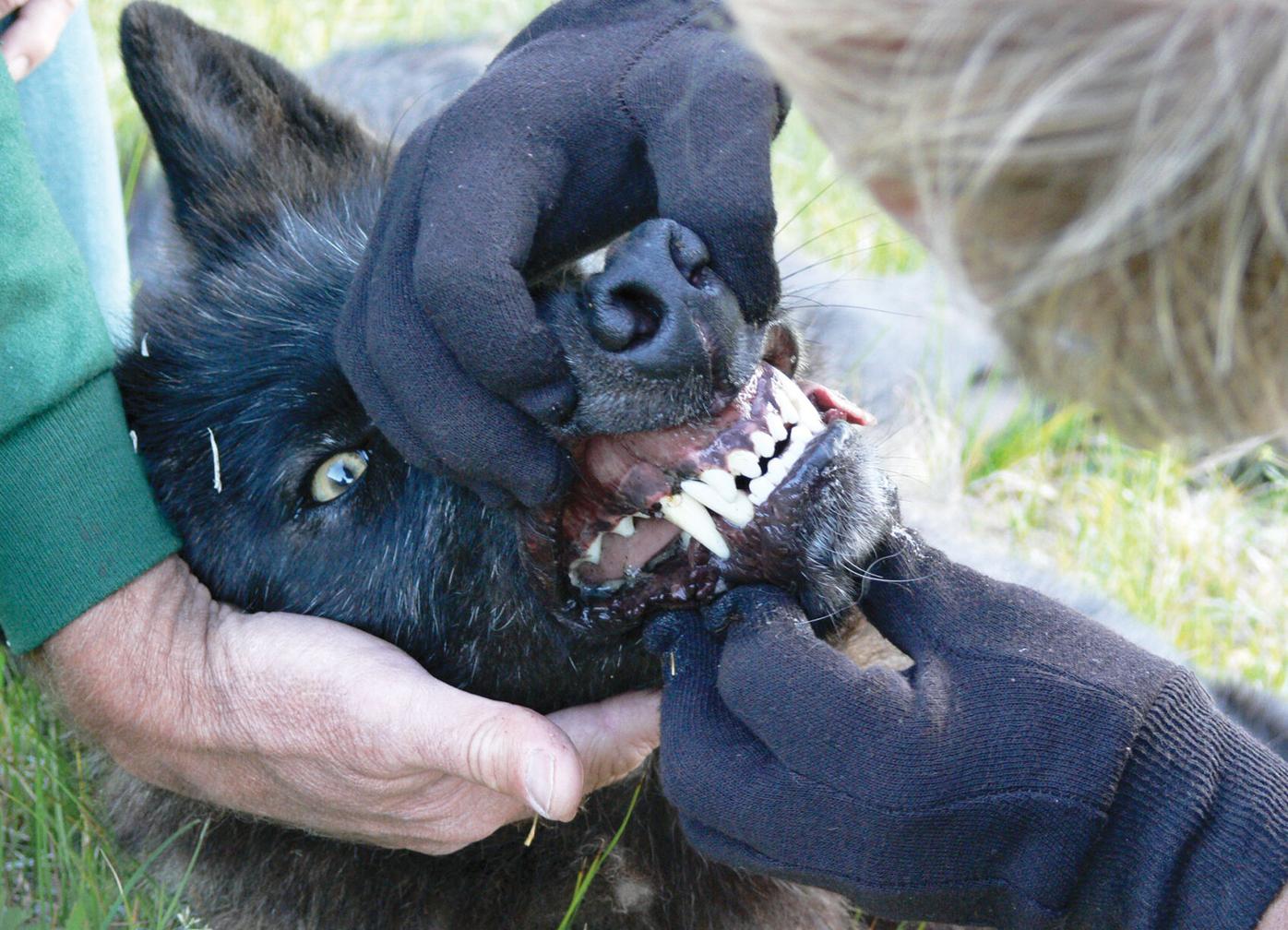 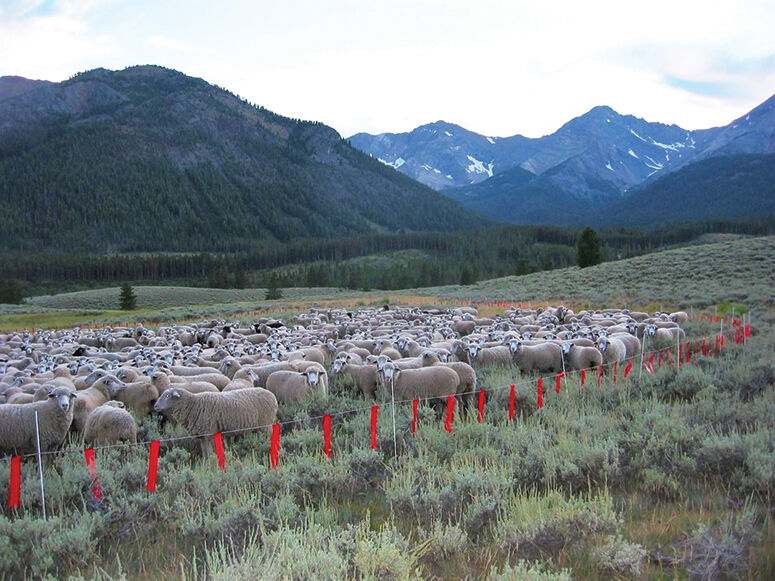 This is the fourth part in a series on wolves. The next story will highlight two local ranchers’ perspectives on wolf management and explore long-term coexistence.

It was a cold January morning in 1995 when cattle farmer and former state representative Merrill Beyeler stumbled upon a sight he’ll never forget.

A heavy snowstorm had come hours earlier, making the trek down to the barn a bit longer than usual. Not far away, Beyeler and his son found one of their calves on the ground. A wolf stood guard nearby.

“The cows were bawling and bunching around the [calf]. It was the one that my wife had rescued from the ice just a week ago—both of us remembered that one because she’d saved its life,” he said. “And then there was the wolf. My son, at first, thought it was a very large dog with a collar.”

The family’s gruesome discovery marked one of the first wolf kills that occurred in Idaho on livestock, just two weeks after 11 gray wolves—transplants from Alberta—were federally reintroduced into the Frank Church Wilderness. One livestock kill around the same time took place near the Pahsimeroi River south of Salmon; the other was on Beyeler’s cow-and-calf operation in Leadore, which runs over 700 head of cattle on a mix of private and public land in the Lemhi Valley.

“I don’t think anybody wanted to admit that quickly that wolves were traveling out from the wilderness into cattle country and killing livestock,” Beyeler said. “I didn’t believe it. One guy had told me earlier, ‘You watch, and they’ll be here.’ I said, ‘Yeah, right.’”

In 2011—just over fifteen years after wolves made their official debut in Idaho, following a long absence—Rep. Mike Simpson helped pull the canines from the federal Endangered Species Act and handed wolf management to the Idaho Department of Fish and Game. The wolf population had surpassed the original reintroduction criteria of 10 breeding pairs, or about 100 animals.

“Since then, we haven’t seen many wolves on the ranch. I can count the number I’ve seen since delisting probably on both hands,” he said. “They’re just not a common sight anymore.”

There was one major exception.

Around four or five years ago, the multi-generational family operation lost about nine calves to wolves in the span of a week and a half. Beyeler remembers picking up one calf in the willows.

“We got it home but as time went on, you could see the trauma was unimaginable and we couldn’t save it. It was in shock and the bite into the muscle, even though we couldn’t see it, was fatal,” he said.

Excluding that incident, Beyeler’s losses have remained close to zero in the last decade—and cattle weights have remained consistent. He attributes that to two things: maintaining constant human presence out on the ranch and shifting calving season from February and March to August and September.

“We realized we were losing calves during the latter part of August, right around when elk calves were becoming stronger, faster and not as easy of prey. Our thought was that wolves’ attention was going in a different direction onto [our] livestock,” he said. “So, we moved when we calve from the spring to the fall so we wouldn’t have calves out on the range during that time anymore.”

This past grazing season, the operation lost only one adult cow, which Beyeler said he can’t attribute to a wolf kill.

“When wolves were first reintroduced, I thought, ‘Well, this is the end of us,’” he said. “And here we are 25 years later, coming off the range in one of the wildest places in the lower 48, with every cow but one. It might sound crazy coming from a rancher, but by and large our average losses have not really changed over the years.”

Unlike other producers he knows, Beyeler believes wolves have played a vital role in keeping elk herds strong and shaping Idaho’s ecosystem into what it is today. In 1959, he said—not long after wolves were eradicated in the continental U.S. by the federal government—elk herds were “out of control.”

“Before we had wolf presence here, you’d go out into the aspen groves on BLM land and see a huge amount of damage by elk. For a while, people thought cattle were responsible,” he said. “Now, you go to those same groves and see rejuvenation. There are even fairy rings [mushrooms] that you can date to [1995] when wolves were reintroduced,” he said.

Elk herds have also come more into line with what they should be, Beyeler believes.

“This is a really hard thing for a rancher to say with the current wolf sentiment, but I’m just going to say it. Wolves have had an absolutely positive effect on the ecosystem,” he said. “You need to have grazers and predators to maintain our very large ecosystems. Today, Idaho is in a golden age of hunting because of wolves.”

With only one cow lost this season, the Beyelers are looking forward to sending their yearlings to market in early October and another batch of cattle the next month. (“That’s payday,” Beyeler said with a laugh.) But other ranchers in the Lemhi area and beyond have faced steeper losses this year.

“When you sell by the pound, every pound counts,” he said. “Some ranchers I know in the Yellowstone region are losing 18 percent of their cattle to grizzly bears and wolves. There’s no way to stay profitable if you lose that much. You’re done.”

Beyeler said lethal control of wolves is often requested in his region because nonlethal deterrents are difficult to implement and many ranchers prefer to operate as their parents and grandparents did.

“The problem that you have when you get in these large landscapes is that you’re not going to be able to gather the cattle every night and put them behind fencing with fladry,” he said. “Also, not everyone has livestock guardian dogs.”

Ultimately, Beyeler says losing animals, especially ones he helped birth, is difficult financially and emotionally. Compensation from the state’s Wolf Control Depredation Board can help, he said.

“Ranchers are already operating on very small profit margins, so you have to really like what you’re doing. Many are underwater,” he said. “My brother told me you’d have to be crazy to run a ranch with such a low return on investment—maybe I’m crazy.”

Lethal control of wolves in moderation can be helpful in some cases, Beyeler said, though completing paperwork and a depredation investigation can be somewhat of a hassle.

“If we do have a wolf kill, it can feel like it’s not worth the effort for [Wildlife Services] to come out,” he said. “However, I do believe there has to be some wolf management, and if you have a pack hone in on your herd, you should be compensated.”

“The recommendation from his research is that if you have a pack of wolves that is preying on cattle, or a grizzly bear that preys on cattle, relocation is not going work and those animals need to be eliminated from the population,” he said. “I think that’s kind of where I sit, but elimination needs to be very strategic because there are some packs that don’t prey on cattle at all and don’t have that genetic predisposition to prey on livestock.”

Three main players currently lead wolf management in Idaho, Beyeler said: the Idaho Fish and Game Commission, the Idaho Wolf Control Board within the Office of the Governor and the Foundation for Wildlife Management. Each organization, almost entirely governed by sportsmen and ranchers, is connected to the others by cash flow.

The Idaho Wolf Control Board, for example, receives about $400,000 in taxpayer dollars every year along with funding from the Idaho Fish and Game Commission and the livestock industry. Up to $715,000 per year is then funneled from the board to Wildlife Services to carry out wolf-control operations; the Idaho Department of Fish and Game is also eligible to receive up to $110,000 in reimbursement funds per year from the Wolf Control Board for killing wolves.

“There is no doubt that wolf reintroduction has changed how we’ve had to do things, and some management is necessary,” Beyeler said. “But, I do see the benefit in [reintroduction].”

“Here we are 25 years later, coming off the range in one of the wildest places in the lower 48, with every cow but one.”

Unlike other producers he knows, Beyeler believes wolves have played a vital role in keeping elk herds strong and shaping Idaho’s ecosystem into what it is today. In 1959, he said—not long after wolves were eradicated in the continental U.S. by the federal government—elk herds were “out of control.”

Educate yourself, pleasewearamuzzle, if it's not too late. The Forest Service isn't doing any of that. It is Wildlife Services, controlling problem animals. 'Problems' usually arise from humans, putting their trash out at night for the bears; are you one of those lazies that can't get up early enough in the morning to put your trash out? When has a baby moose - or adult - ever been killed, other than a fatally injured one, probably hit by a car, driven by a human?

Stop Idaho from wasting taxpayers dollars on paying for profit companies to shoot and leave dead wolves on public lands , cattle ranchers have taken over Stanley ! They destroyed the local ground water , it now has cow poop in the ground water and in the river everyone survived on for years now has cow poop in the water , and now these wealthy cattle ranchers want to push the cattle and sheep deeper public forest lands and demand the government kills all wolves in the state while farmers loose money to the worst crop damage in 30 years because now Idaho has almost no wolfs the elk population in check , go to Stanley the wealthy cattle ranchers have taken over like the show Yellowstone