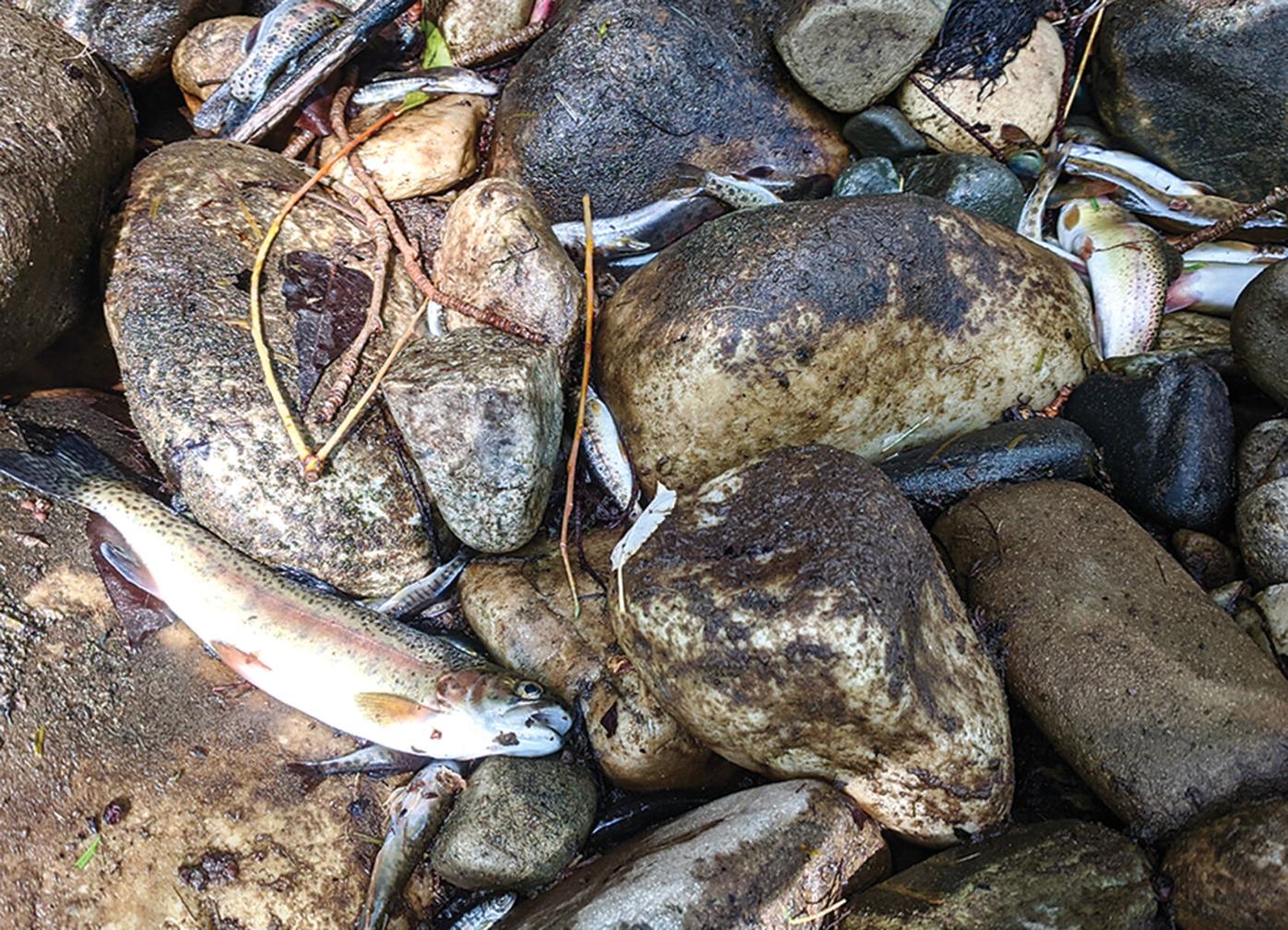 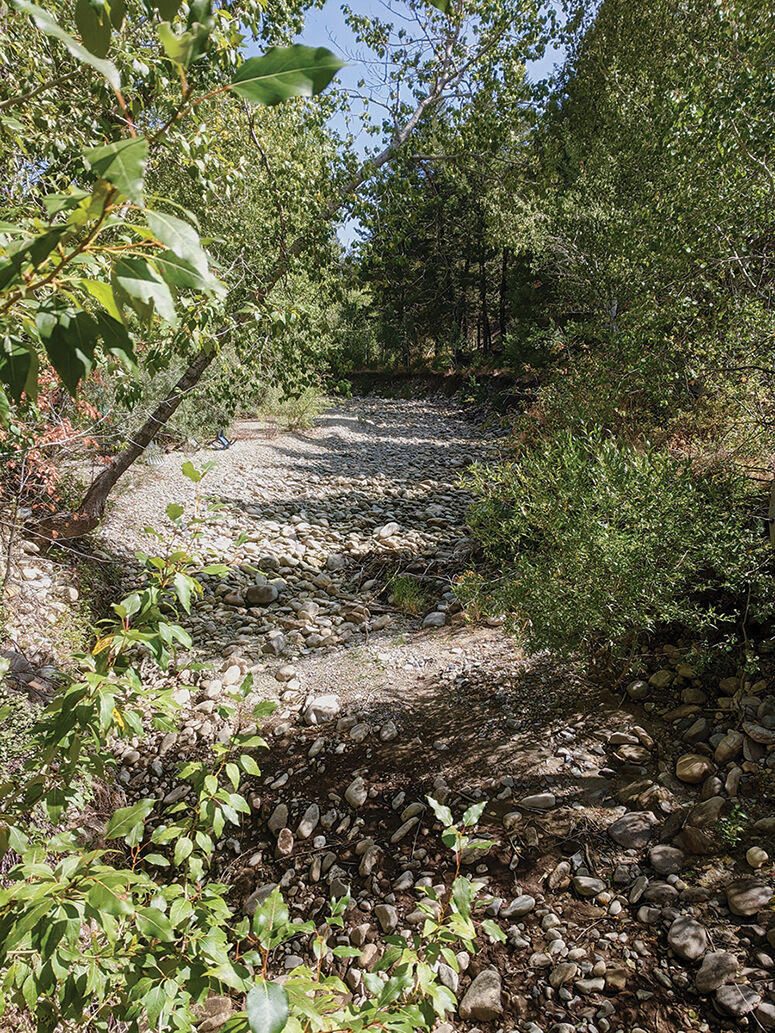 A property owner on Hyndman View Drive allegedly drew over 1 million gallons from the East Fork of the Big Wood River last Monday to fill a private pond, causing a 3-mile stretch of the channel to go dry for 27 hours.

The incident resulted in a significant trout die-off, according to Balthasar Buhidar, regional quality manager for the Idaho Department of Environmental Quality. Buhidar said the entire event, which started Monday morning, was captured by the U.S. Geological Survey’s East Fork stream-gauge located off Timberline Road.

“The flow during the dewatering period was essentially zero, except for those areas where water was held in small pools or holes. The [incident] created a fish kill of predominantly rainbow trout,” he said.

Kristine Hilt, floodplain manager for Blaine County Land Use & Building Services, told the Express that the property owner had an 1884 water right for irrigation purposes and a 1985 groundwater right. But neither of those gave the person permission to divert surface water from the river to fill a pond, she said.

“It’s really important to make sure that things like this don’t happen again, and that folks are mindful of the consequences of their actions,” Hilt said. “We have an entire industry based on fishing and river recreation. This is a really low water year—we are far below the median daily discharge—and this was a lot of water [diverted], enough to fill up a small reservoir.”

The property owner in question reached out to the Express on Tuesday with a different story, told on the condition that his name not be used in print. He said Water District 37 Deputy Manager Ryan Fuchs had given him authorization to fill his pond with river water for irrigation purposes.

“At the bottom of my pond is a pump to irrigate 150 of my trees. I don’t fill my pond just to look at fish—it’s for irrigation, and I do it with permission from the Water District. [Hilt] may not have known that,” he said. “Also, I didn’t take water out until [from] Monday evening until dawn the next morning. My family has pictures to prove that.”

The property owner added that a windstorm with gusts up to 50 mph had knocked down several trees on Saturday and Sunday, temporarily blocking part of the river.

“I don’t want to be accused of killing all of these fish,” he said. “I’m not going to make any assumptions until I have the facts, but saying that I personally dried up the river is untrue. It’s totally impossible.”

The Idaho Department of Water Resources is investigating the possible water diversion.

“We’re gathering information at this point and don’t have much information to share,” department spokesman Aaron Golart said on Tuesday. “There are consequences for diverting water without a water right or altering a stream channel without a permit, but it’s premature to say that’s what occurred here.”

District 37 Watermaster Kevin Lakey said he wasn’t aware of any illegal diversions last week but took responsibility for the incident.

“The dead fish behind my house were in a pool as wide as the river and about 40 feet long,” one neighbor, who wished to remain anonymous, told the Express. “The important part is that the river was completely dry for [a day]. No fish can survive that completely unscathed.”

“It’s really important to make sure that things like this don’t happen again.”

I am in awe that some ego driven maniac can reduce the river to nothing and divert all that water for a "water feature" on his property. He should be fined for every fish that he wasted just like anyone else.

Is this the same person that was responsible for the Hyndman Fire on 4/23/2020 which eventually escaped to public land?

seems to be.....the fire department gave him a burn permit which was stupid given the conditions and now a permit is given to drain the river during a time when east fork is the lowest its been in over 20yrs, again stupidity on the part of the public official. Now one might expect the person(s) given these permits might exhibit an ounce of common sense and not burn on a hot, dry, windy day or divert the river on an extremely low year ruining the fish habitat downstream. But common sense or appreciation for the risk of their actions are not present with this person(s). Both cases sad and avoidable. If it's the same person, they need their head examined.

Don't think he could drain a whole river.....

Exactly.... he could not drain a whole river.

It's not a 'whole river'. It's a drought-stricken river with significantly reduced flow from average. Investigators just need to look at his pump size/gpm/cfs rating and compare it to the paltry flow in the East Fk right now. What's the Democrat buzz word right now? Science. Even if the flow at a meter location on the river exceeds the pump flow, many streams in the valley go partially or fully underground in different sections.

Of all the crazy bull——- things that have happened this year.... This takes the cake. Public shaming is justice. The total disregard for our environment during COVID is amazing and depressing.

Now those are some words of integrity..." public shaming is justice". You are really classy.

How can you divert a whole river and get away with this? it does not matter if this is a misunderstanding. Someone has to be held accountable! I hope this is a continuing story and not 'water under the bridge'.

Must be from California

you know it. print his name and picture,hopefully his mug shot. AND--follow the money. this is beyond a "miscommunication"

Now I can see what the true definition of white privilege is. SCUM BAG!

white has nothing to do with it. jerks come in every color.

Throw the book at this idiot.

Not that hard to find the property owner. Takes 5 minutes. BC GIS, satellite map, zillow.

Out the person who did this. The public has the right to know who this person is and if he did anything illegal, prosecute him.

He did nothing illegal, you need to get all the facts before you comment.

Quote - "But neither of those gave the person permission to divert surface water from the river to fill a pond, she said."

My qoute..."IF (a big IF) he did anything illegal" read my comment before you respond.

Just another rich, entitled, a-hole, selfishly taking whatever they want to the detriment of everything! Blaine county is a sell out!

You are an ignorant person who has no idea of the facts of the situation. Come to the table with facts and you will realize the homeowner did nothing wrong. Pretty sure you are the a-hole.

wow,you are jaded. tell your story to the dead fish.

And why did you plant 150 trees ? Another example of gross overplanting in this valley. Cmon newbies, enough with the excess landscaping. Time to stop the waste

It's called a FARM. Perhaps you should look into what a legal tree farm means.

your ignorance is astounding. it is better to have people think you are stupid than it is to open your moth and prove them right.