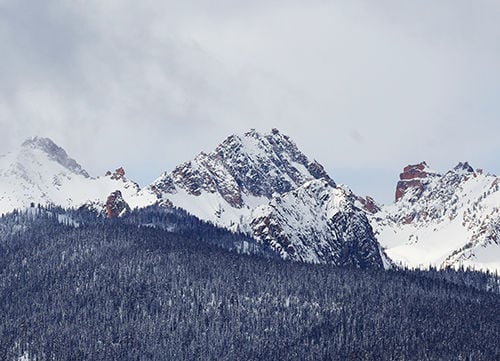 The Arrowhead, seen here in March 2019, sat between Dave’s Peak, left, and Sevy Peak, center, in the Sawtooths. It collapsed following a March 31 earthquake. 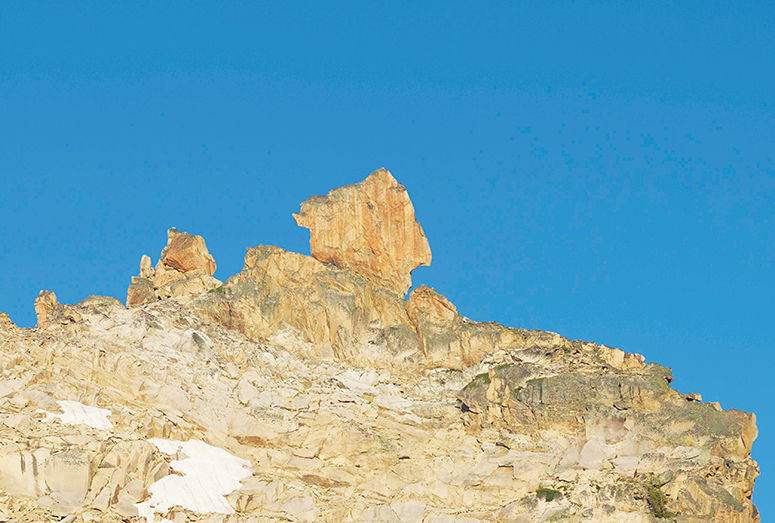 Amid a pandemic, Idaho also experienced its most forceful earthquake in more than 36 years, the state’s second strongest earthquake ever recorded. Though the Custer County Sheriff’s Office reported no damage in Stanley, the town closest to the epicenter, the viewshed of the Sawtooth Mountains from state Highway 75 has been forever changed.

The Arrowhead, a distinctive and striking rock formation in the Sawtooths, fell during the 6.5 magnitude earthquake on March 31, as did the summit block and smaller block at the apex of the Finger of Fate, one of the Sawtooth range’s most-climbed rock formations.

While the Arrowhead was a lesser-ascended rock-climbing route, to some it held history.

Though born and raised in Ketchum, Tristan Potters, 34, only did the picturesque climb once, on July 28, 2018, with another Ketchum local, Matt Hansen.

Described as having a “spicy traverse”—an exposed lateral move—followed by a “short, beautiful hand crack to the summit,” the two-pitch climb—about 180 feet total—was roughly a four- to five-hour approach from the Hell Roaring Lake trailhead to the base of the route.

Potters and Hansen opted to split the approach, camping at the base of the Finger of Fate before rising early on July 28 to finish the hike to the base of the Arrowhead.

Hansen described the full approach as long, but “full of eye candy,” including the peak of Mount Cramer, three-quarters of a mile northeast of the Arrowhead and numerous lakes along the way.

The first pitch was described as “chossy”—rock that is unstable—and “exploratory,” but generally mellow. The second pitch is where the fun is: a hand crack with a slight overhang, “then you’re pretty much there,” Hansen said.

The top of the Arrowhead was hyper-exposed, straddling three of Idaho’s major drainage systems, the Salmon River drainage to the east and the Payette River and Boise River drainages to the west. According to summitpost.org, a crowdsourced informational page for rock climbs, the top fin formation was so thin that it would whistle during a strong wind. Hansen agreed, telling the Mountain Express that the summit felt extremely exposed, almost as though the top flake of the rock formation was moving when a sharp wind hit it.

Like the Finger of Fate summit, the Arrowhead had a registry at the top—essentially a notebook with climbers’ names and the date they summited the climb. Hansen said that from the registry, it appeared the climb was seldom done, with few names recorded.

As far as the collapse goes, “it’s pretty sad, but also a part of a pretty incredible time, geologically,” Hansen said.

What else may have changed in the Sawtooths has yet to be determined, but between these two ascents, a chapter of what had been climbed for seven decades has closed.

“It’s pretty sad, but also a part of a pretty incredible time, geologically.”

A frequent traveler in the Sawtooths, MESH Gallery’s Jeffery Lubeck chronicled the landscape and often admired its legendary peaks. His photos of the range—including one contributed for this story—line the walls of his Ketchum Gallery. To read Lubeck’s take on the collapse, click here.

The Sawtooth Mountain Range of Idaho is perhaps best known for its sharp tooth-like peaks. Many of the peaks possess imaginative and descripti…