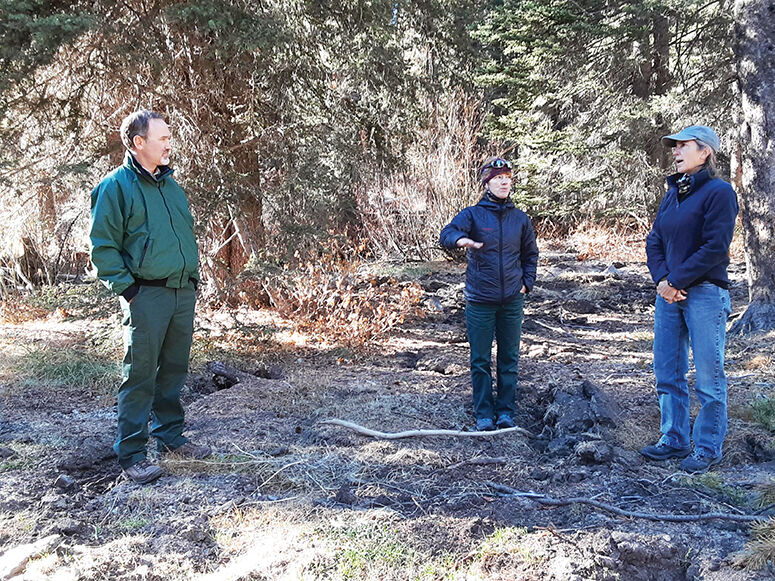 During a press tour along Prairie Creek Road on Wednesday, SNRA Area Ranger Kirk Flannigan, left, Recreation Program Manager Susan James and wildlife biologist Robin Garwood stand on an area tilled by machinery to loosen up compacted vegetation so new plants can take hold. “It’ll look rough for a while,” Garwood said, and may take three to 10 years to look natural again, according to James. 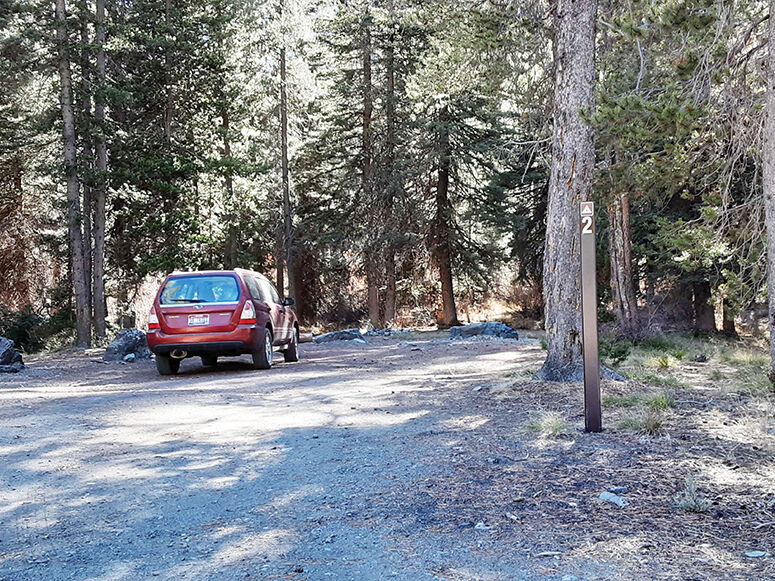 Twelve designated campsites have been created along Prairie Creek Road north of Ketchum. An additional 17 are planned for the area next year.

People can’t camp wherever they want to on the Sawtooth National Recreation Area north of Ketchum anymore.

In response to a steady increase in use and associated degradation of the land and creeks, the U.S. Forest Service is creating 77 designated campsites in the North Fork Canyon and Prairie Creek areas. The result is a situation similar to that of the Ketchum Ranger District, where about 150 designated campsites have been created over the past 15-20 years in the Corral, Warm Springs, Deer and Baker creek drainages.

SNRA Recreation Program Manager Susan James said she’s seen camping use in the Big Wood drainage increase by about 40 percent since she started working here seven years ago. The result, she said, has been an extension of unauthorized vehicle tracks, destruction of riparian vegetation, compaction of soil, erosion of streambanks and sedimentation of creeks.

The increase in use was particularly apparent this summer, as the COVID-19 pandemic has restricted most people’s travel to nearby destinations.

“I saw campsites in places I had never seen campsites before,” James said.

The work on the SNRA, done this summer and fall, is part of a Big Wood Travel Management Plan, begun in 2014 and signed in August 2018.

James said 29 sites will be created in the North Fork area, 22 in the Prairie Creek drainage and 26 on the east side of the highway in the area of Prairie Creek and Russian John Guard Station.

Twelve designated sites have already been created along Prairie Creek Road and six across the highway. James said the remaining sites should be done in the spring.

Parking spots at designated campsites along Prairie Creek Road have been blocked with rock barriers to keep vehicles away from the creek, and metal fire rings will be installed to eliminate numerous rock fire rings, she said.

Areas at campsites that have been compacted by human use have been dug up to loosen the soil and allow vegetation to recover.

“The ground in these areas was so compacted from vehicles and foot traffic that trees were dying and shrubs, grass and other ground vegetation could no longer grow,” James said. “Decompaction is a common practice and key to natural revegetation.”

Wildlife biologist Robin Garwood acknowledged that those areas will “look rough for a while.”

James said that “based on extensive experience doing this kind of work on the Sawtooth NRA, we anticipate improved conditions within three to 10 years depending upon the site.”

In an interview, Ketchum resident Michael S. Marin, who said he has camped with his family in the Prairie Creek area for many years, objected to what he has seen of the work done there.

“It was not done with any consciousness whatsoever,” Marin said. “If they’re going to leave it that way, in this high desert climate it will take decades to restore itself, as anyone who has grown up here can attest to. This is scarred land, not restored land.”

James said that in areas where it is necessary to accelerate recovery, the Forest Service has and will continue to spread native seed and plant willows.

“This will be an ongoing effort,” she said.

In addition to creating the campsites, the Forest Service has consolidated the Prairie Creek, West Fork of Prairie Creek and Mill Creek trailheads at one spot 2.5 miles up the road from the highway. About half a mile of new trail has been built to connect with the original trail to Mill Lake. James said the SNRA hopes to get funding through the Great American Outdoors Act to fund the replacement of a poorly functioning toilet there.

Horse trailer parking space has been created at the two designated campsites closest to the trailhead.

In addition to restricting camping areas, the Big Wood Travel Management Plan involves closing about 12 miles of roads, some of which are being converted to nonmotorized trails.

A parking area for the Harriman Trail just up from the highway will be removed. James said the spot gets little summer use and is inaccessible in the winter.

SNRA Area Ranger Kirk Flannigan said that when funding becomes available, the large parking area at the headquarters building at North Fork will be expanded by 30 spaces and converted to a one-way, pull-through configuration. James said the lot gets full in the winter.

Garwood, the wildlife biologoist, said it is expected to take another two to three years to complete all the projects under the new travel plan. Part of that work will involve restoring unauthorized roads in the Galena Lodge area to natural conditions, she said.

“I saw campsites in places I had never seen campsites before.”

Susan James, SNRA recreation program manager, on this summer’s use

I haven't been in all of the locations, but the N Fk of the Big Wood in particular, they took out a lot of great camping spots 'too close to the river'. That seemed to be the theme. Those that they did retain, they did OK on them, putting up boulders so you couldn't drive in too close to the river, but you could still put large tents up close to the river (they didn't rip the ground up). A lot of spots were eliminated/made unusable.

TOTAL BS, FOREST SERVICE! CLOSING ROADS, TAKING AWAY DISPERSED CAMPING, TOTALLY TAKING AWAY WHAT HAS MADE MY 6 GENERATIONS OF FAMILY FROM THIS VALLEY LOVE THIS PLACE FOR SO LONG......YOU ARE RUINING OUR FOREST EXPERIENCE. POLE CREEK, BEAVER CREEK, NORTH FORK, OWL CREEK, JUST TO NAME A FEW . RUINED BY YOUR OVER MANAGEMENT!