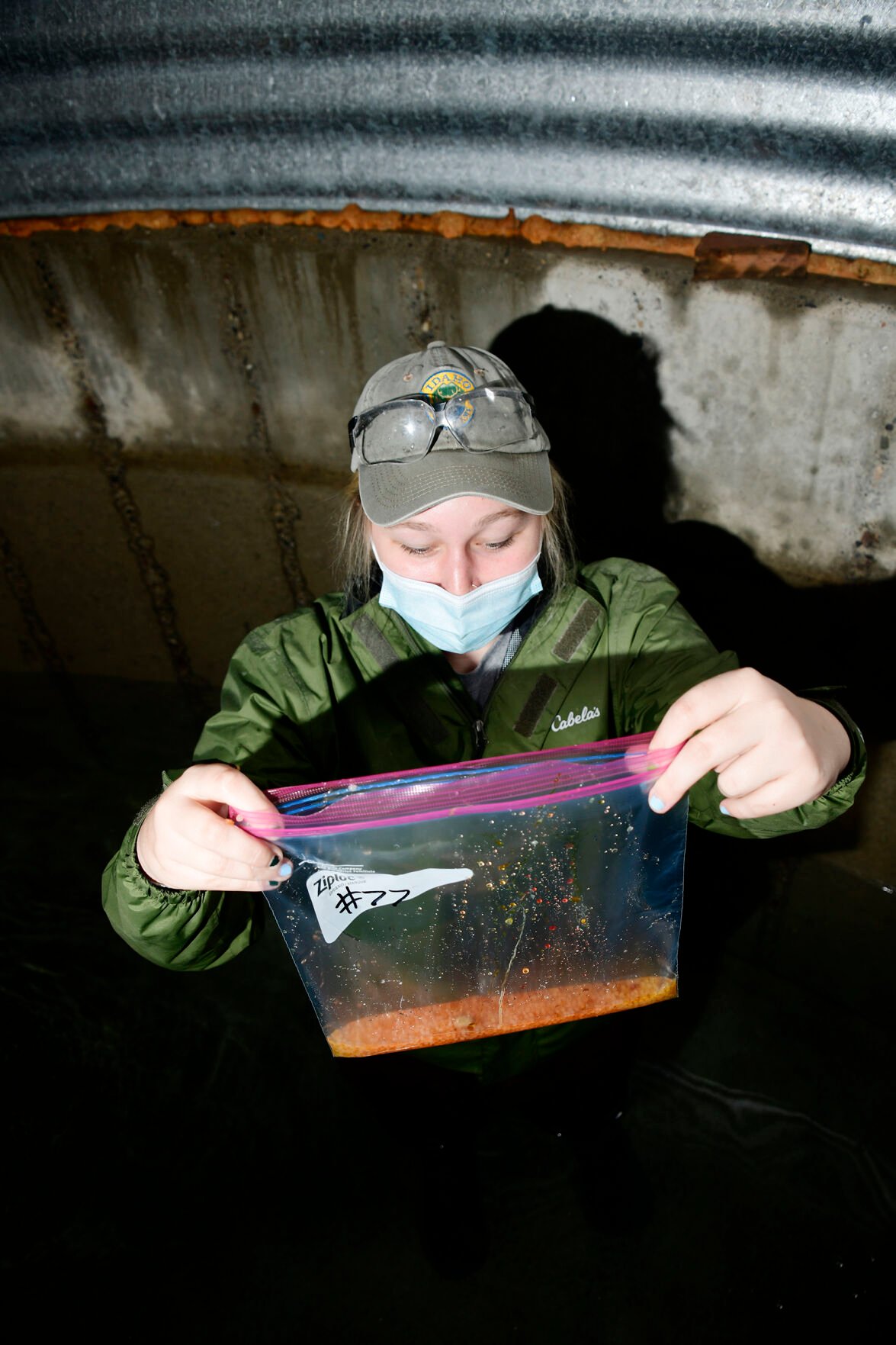 The YY “super-males” selected for breeding are chemically drugged in large white plastic bins. As their thrashing movements becoming more sluggish, a fishery technician (pictured: Hannah Zigman) dries the belly of a fish with a towel, massages its belly and collects milt in a plastic bag. The same process is used for collecting eggs from female brook trout. 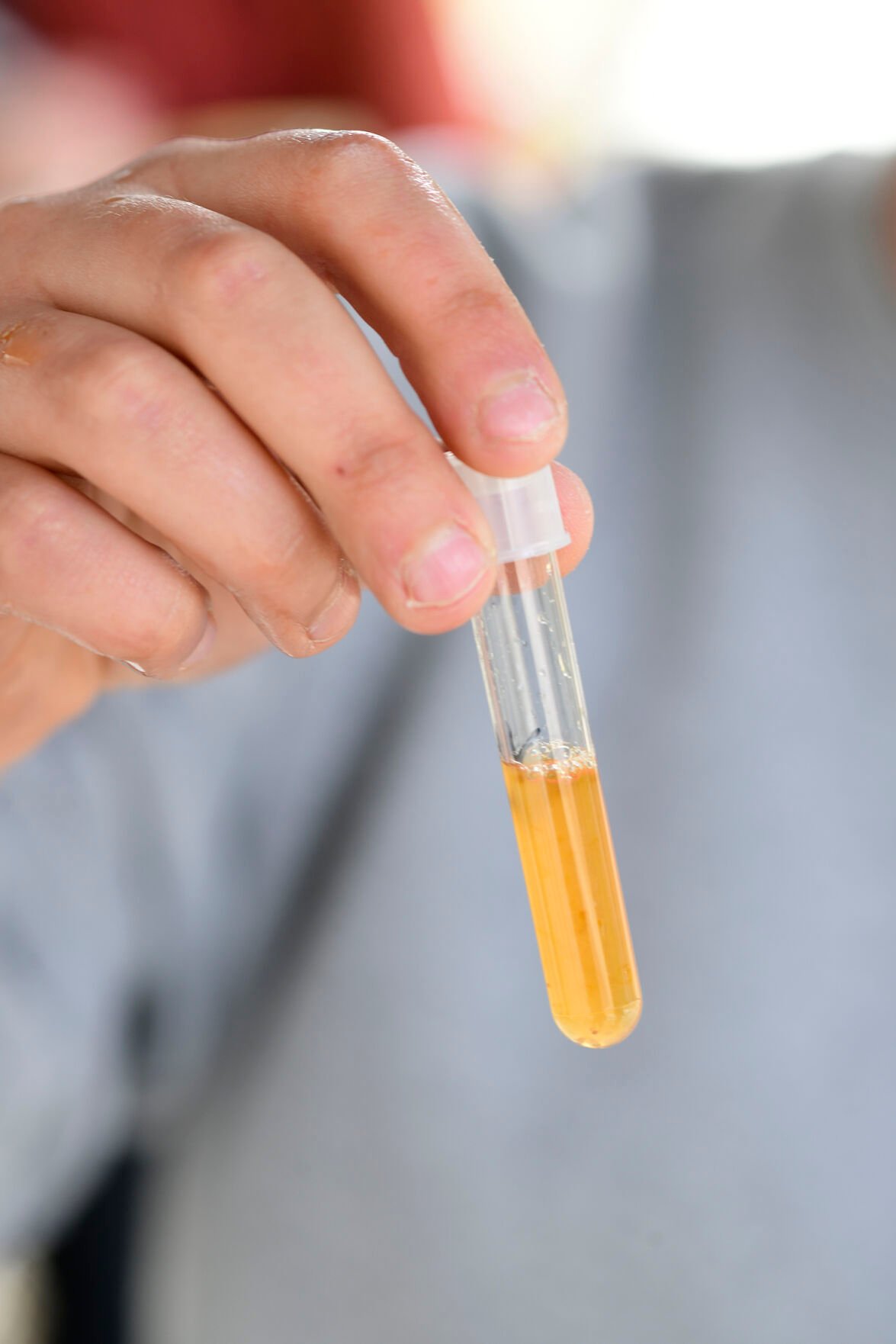 Hayspur Hatchery Fishery Technician Paula Fanta uses eyedropper to collect ovarian fluid from brook trout eggs. Any “bad” batches with bacteria detected are culled, while “good” batches are placed in a cooler to await fertilization. The eggs are then shipped to other hatcheries across the country. 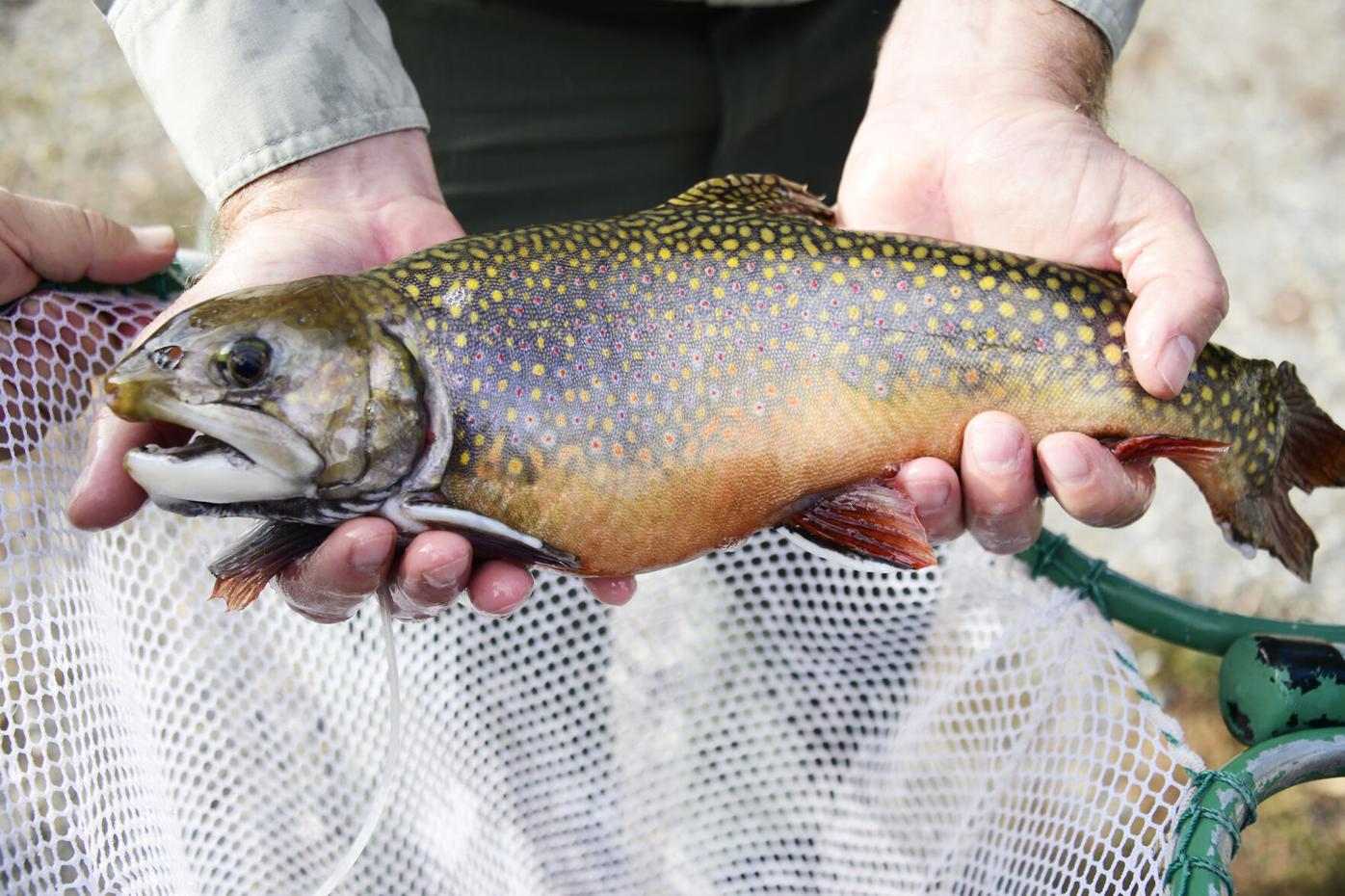 Jared Riemenschneider scoops up two-year-old super-male brook trout in one of the Hayspur Fish Hatchery’s enclosed silos on Tuesday, Oct. 19. Technicians place the broodstock in a large plastic bin--looking for fertility indicators like vibrant coloration--and toss back the fish that don’t make the cut for breeding.

The YY fish are released into the Big Lost drainage and other sections of Idaho and can only produce males when they spawn, leading to fewer females and population collapse.

With their aggressive feeding habits and spectacular colors—olive-green backs, white-tipped fins, a spattering of yellow and red spots ringed in pale blue and fire-red bellies—brook trout are arguably one of the most attractive sport fish in North America.

But while regarded as an iconic predator in their native range—that is, cool, well-oxygenated lakes and streams in the eastern U.S. and Canada, from northern Georgia up to the Hudson Bay—the fish are an unwelcome presence in the Western U.S.

That’s for two reasons, according to Gregg Anderson, Idaho Fish and Game Hatchery Manager for the Magic Valley region. Ever since brook trout were first introduced in the West in the early 1900s to expand fishing opportunities, he said they’ve taken over high mountain lakes throughout central and eastern Idaho, particularly in the Big Lost region near Mackay.

The fish are so abundant that they have threatened native cutthroat and bull trout populations. And while they can reach over 20 inches in captivity, Anderson said, overpopulation limits them to much smaller sizes in the wild. The stunting effect makes them unappealing to anglers, Anderson noted.

“They are an introduced, prolific species from the Eastern Seaboard that did better than they should have,” Anderson said. “What happens is that they’ll overpopulate and cut out what is supposed to be in our streams—cutthroat trout, bull trout and rainbow trout.”

In the early 2010s, biologists at the Idaho Department of Fish and Game began brainstorming solutions to eradicate the non-native fish. A few possible solutions were introducing tiger musky or tiger trout in alpine lakes, chemically treating the lakes to kill all fish present or enlisting fishermen to catch and cull brook trout one by one. But none of those methods were efficient or cost-effective. So, in 2013, the department established its YY Male Brook Trout Research Program to collapse the population in a more sustainable, less invasive manner.

The goal is simple: to skew the ratio of males to females by intentionally creating “super male” trout that can only produce male offspring. The super-males have two Y chromosomes instead of the usual XY arrangement and are created through selective breeding, Anderson explained.

“This is a first-in-the-world program.”

The hope is that eventually, the unwanted fish population--infiltrated with YY males--will produce fewer and fewer females and die off.

Since 2015, when Hayspur Hatchery technicians first began rearing YY brook trout, the project has excited fish biologists and fishery managers around the world, Anderson said. If proven successful, the methodology could be used to target problematic non-native fish populations in the Eastern U.S., such as Asian carp that have infiltrated the Mississippi River and surrounding waters.

Located south of Bellevue in Blaine County, the Hayspur State Fish Hatchery was established in 1907 and began rearing trout in the early 1920s. Today, the facility produces anywhere from 6 to 7 million trout eggs annually.

The campus is large, with an incubation building for trout eggs, a hatchery building with rearing vats, an office building, steel silos, and 10 raceways, or concrete channels.

On a particular Tuesday in October, hatchery technicians scoop pellets out of a large 5-gallon bucket and distribute them in one of the facility’s rainbow trout raceways, covered with steel wire to bar fish-eating herons, pelicans and mink from entering. (Regulations are strict and all waters must be kept disease-free. If a feral cat gets into one of the raceways, for example, all fish in the channel must be culled.)

Nearby, brook trout are housed in large bins and circular ponds enclosed by steel silos, one for each age group: first-years, second-years, third-years and fourth-years.

In one of the several enclosed silos, a batch of young brook trout is exposed to low doses of estradiol, a female sex hormone. While the females are unaffected by estradiol, the hormone causes the males in the group to essentially go through female puberty and produce eggs. The ovulating males are then bred with standard XY males, producing YY “super males” about 25% of the time.

The new super-male generation of trout--indistinguishable from XY males--go on to produce exclusively male fish when bred with any other brook trout. At the hatchery, the reproduction process is expedited by collecting milt and eggs on Tuesdays and fertilizing the eggs in large plastic bags.

All standard XY males that hatch at Hayspur are chemically culled, while YYs are either kept as broodstock or released into the wild to breed with wild females and amplify the wild male population.

By age four, the YY brook trout weigh up to 2 pounds each and are culled due to size constraints. (In the wild, brook trout are rather short lived, averaging about three years.)

Currently, 3-inch “fingerlings” and 10-inch YY brook trout are released in the wild via helicopter, from high mountain lakes near Cape Horn Mountain north of Stanley to Spencer, according to Jared Riemenschneider, assistant manager of the hatchery.

“All the indications that we’ve seen so far are very good,” Anderson said. “This is a first-in-the-world program.”   

Toxic masculinity to the rescue! |:^)