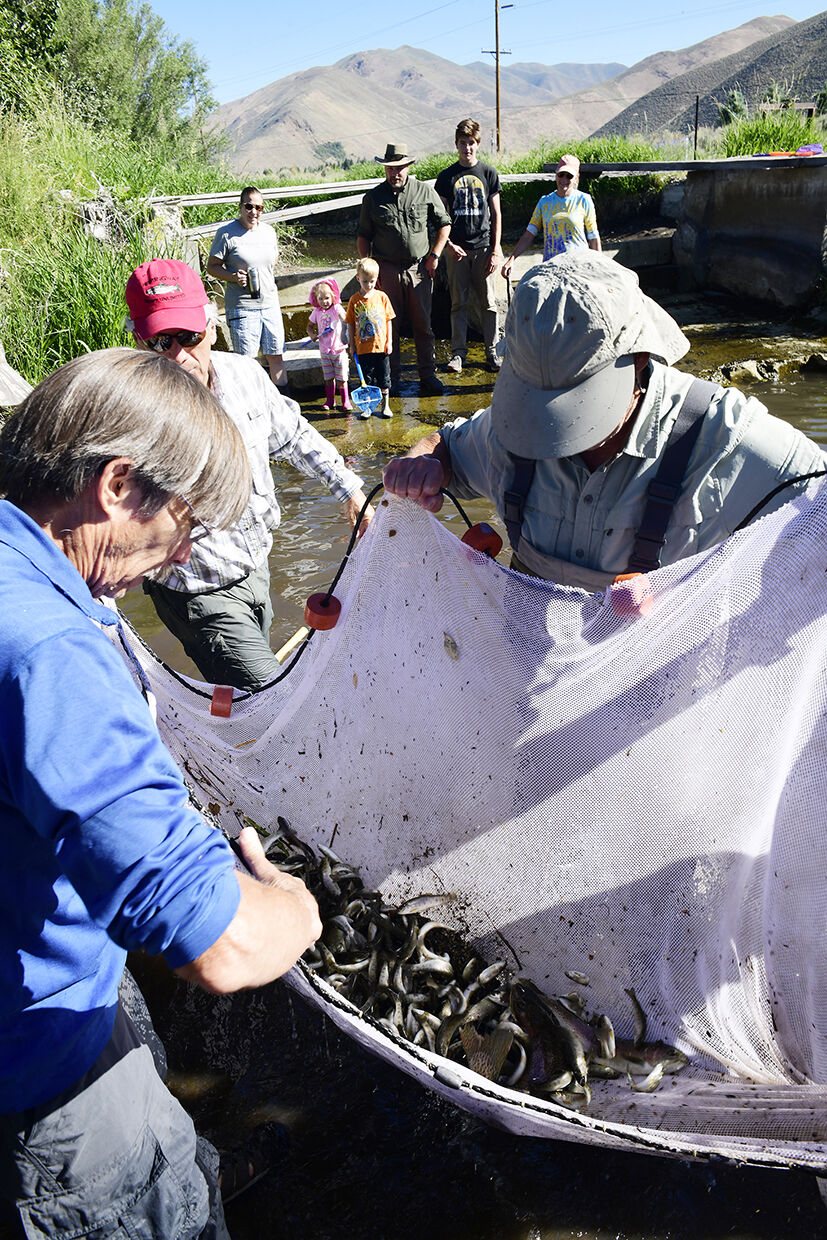 Fish rescues—like this one conducted near Bellevue by Trout Unlimited earlier this month—are increasingly commonplace as portions of the Big Wood River dry up.

The National Oceanic and Atmospheric Administration’s U.S. Drought Monitor upgraded Blaine County’s drought status from “extreme” to “exceptional” last week, bumping most of the county from the NOAA’s second-worst drought classification to its worst.

In May, most of Blaine County was experiencing “severe” drought and only small portions of northeastern Blaine and southern Custer Counties, including Trail Creek Summit and the Big Lost drainage, were listed under “extreme” drought.

By June 10—the day Magic Dam shut—the bull’s eye of the drought had intensified from “extreme” to “exceptional,” shifting in color accordingly from red to crimson.

Following the early end to irrigation season, Agriculture Secretary Tom Vilsack officially designated Blaine County a “primary natural disaster area” along with Lincoln County, including the latter because of its dependence on Big Wood River flows.

“[Vilsack’s] natural disaster designation allows the [Farm Service Agency] to extend much-needed emergency credit to producers recovering from natural disasters,” the USDA stated late last month. “Emergency loans can be used to meet various recovery needs, including the replacement of essential items such as equipment or livestock, reorganization of a farming operation or the refinance of certain debts.”

By July 13, the scope of the drought in central Idaho had expanded substantially, according to NOAA data. The “exceptional” area had swept north into Custer County, east into Butte County, south into the entire Wood River Valley and west into Camas County. The underlying “extreme” drought area also grew to cover the northern tip of Blaine County.

On July 20, Blaine County’s “exceptional” drought area spanned from Craters of the Moon National Monument to Easley Peak and included all cities in the Wood River Valley.

As of Tuesday, Blaine County’s “exceptional” drought area spanned from Craters of the Moon National Monument to Easley Peak and included all cities in the Wood River Valley.

Precipitation, too, has been at a sustained record low since June 15. On Tuesday, the county’s six SNOTEL stations—at Chocolate Gulch, Dollarhide Summit, Galena Summit, Deadend Canyon, Enid Gulch and Park Creek Campground—recorded 15.7 inches of accumulated precipitation for this water year, according to the Natural Resources Conservation Service. The previous minimum accumulated precipitation record for that day was 16.9 inches, recorded in 1994.

In typical water years, the Big Wood Basin will have accumulated about 27 inches of precipitation by July 20.

Trout in the Wood River Valley are facing grim conditions this summer due to the drought and recent heat waves, according to a Friday report from Joe Kozfkay, Idaho Department of Fish and Game state fisheries manager. But, he said, fishing isn’t likely to contribute much to that die off.

“While some heat-stressed fish will die from angling-related mortality, basing fishing closures on reduced risk to a relatively small portion of the local trout population is unlikely to change the overall numbers in the near or long term,” Kozfkay stated. “Above-average water temperatures may increase natural mortality rates for trout as they are forced into completing longer-distance migrations to seek out colder waters or succumb to stressful environmental conditions.”

Local fishing guides and trout advocates urge anglers to closely monitor water temperatures on the river, and call it a day when it gets too warm.

“Plan on getting your fishing done early and plan to take the afternoon and evening off once water temperatures hit 67 degrees,” Bret Bishop, a guide for Ketchum’s Silver Creek Outfitters, wrote in his weekly fishing report. “As always, please land fish quickly and keep them in the water while releasing.”

On Thursday, July 22, Fish and Game will host a public meeting in Hailey on trout management during drought conditions, explaining why the department will not be implementing fishing closures this summer. The public meeting will be held at 7 p.m. at the Hailey Community Campus Performing Arts Theater.