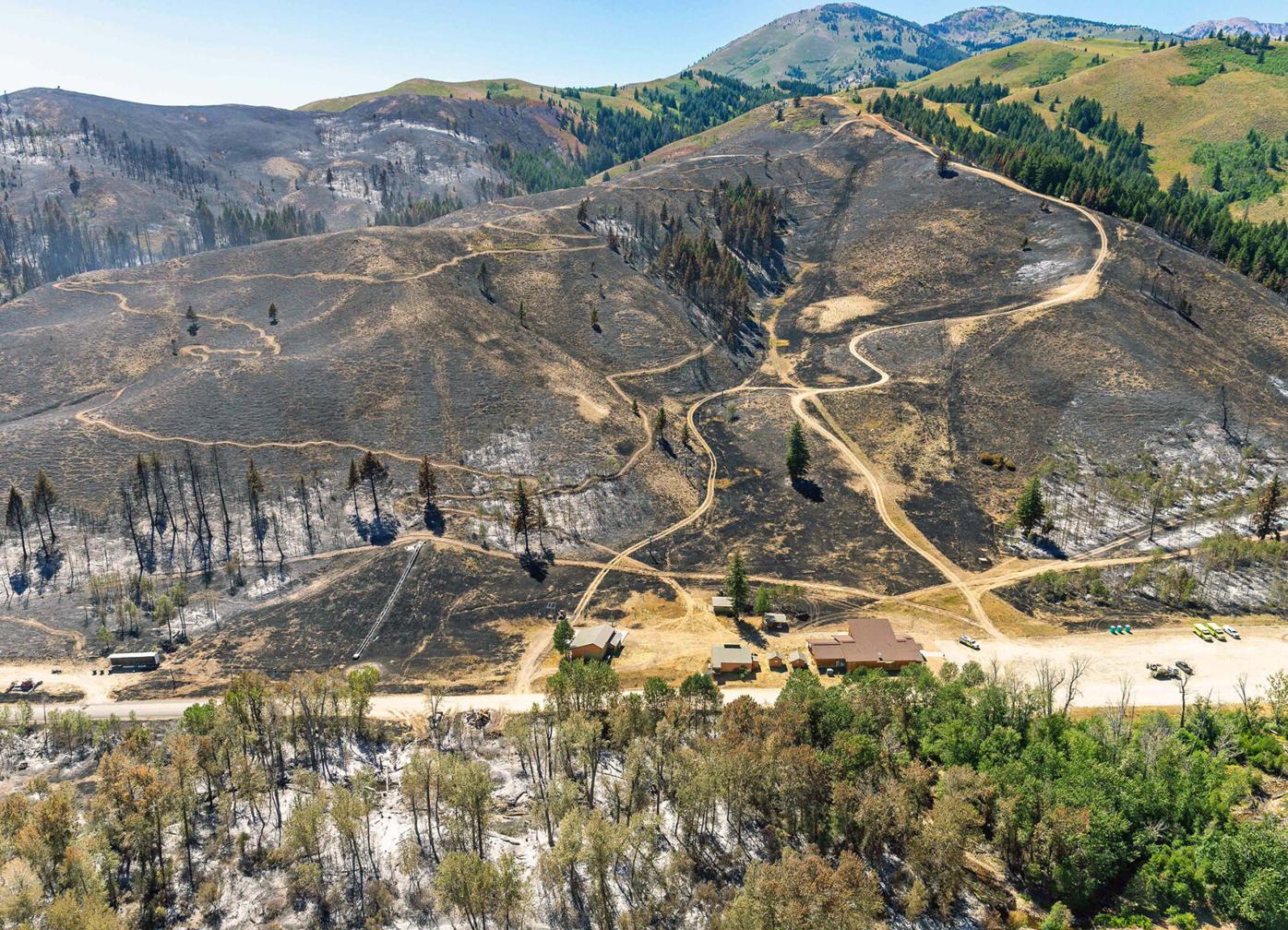 The Phillips Creek Fire scorched Soldier Mountain Ski Area over the weekend, though most of the resort’s major infrastructure emerged unscathed. 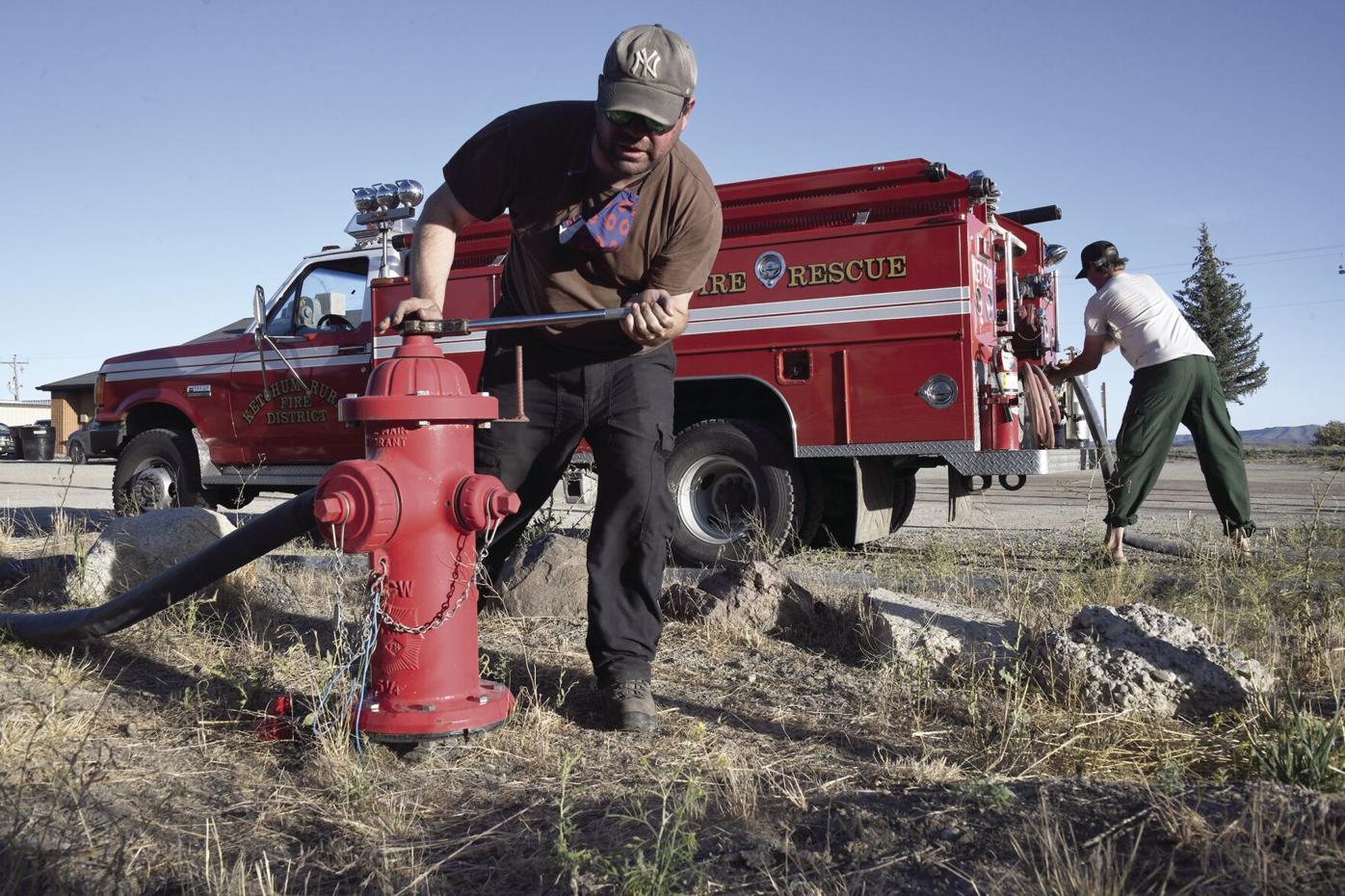 Hundreds have joined the effort to contain a wildfire north of Fairfield. On Saturday, Ketchum firefighters Brian Tierney, left, and Mike Curry filled up their truck with water, grabbed a bite to eat and then headed back to the fire.

More than 400 firefighters beat back the Phillips Creek Fire near Fairfield on Monday night into Tuesday, freezing the spread of the blaze at 2,112 acres and closing in on containment.

By Tuesday morning, the fire was 86 percent contained—up from 7 percent 24 hours earlier—with a crew of 414 under the command of the Great Basin Incident Management Team 3 working towards controlling the blaze.

The progress comes as welcome relief for many in the Wood River Valley, for whom the fire bore grim resemblance to the massive Beaver Creek Fire of 2013, which was sparked by lightning less than 15 miles from the source of the Phillips burn seven years ago Saturday.

On Tuesday, forecasters for the National Wildfire Coordinating Group seemed confident in the ongoing attack, which will continue this week. Strong winds, hot temperatures and possible thunderstorms could amplify already ripe wildfire conditions in the area as the week progresses, though they “are not anticipated to produce more than minimal fire activity,” according to the Phillips Creek Fire report on InciWeb, the federal wildfire information system.

The fire, ignited by lightning on Wednesday, Aug. 5, in the southern end of the Sawtooth National Forest, grew from 150 acres on Thursday, to nearly 700 on Friday, to more than 2,100 on Saturday, spreading north into the Free Gold Creek and Soldier Creek Drainages.

High winds caused “extreme” fire behavior throughout the day on Friday, according to U.S. Forest Service spokeswoman Julie Thomas. The growth caused the forest service to call in the Great Basin team, a Type 2 incident management team, in order to coordinate the effort.

“We’re putting everything we have on this,” Thomas told the Express on Friday evening.

That day, the fire ran through brush and timber, she said, threatening several structures in the Phillips Creek, Free Gold Creek and Soldier Creek drainages, including the Soldier Mountain Ski Area. Soldier Mountain delayed opening its new mountain bike trail system this weekend due to the fire. As of Saturday afternoon, the lodge and lifts were “intact,” according to Soldier Mountain’s Facebook page, though outbuildings and an access bridge appeared to be damaged.

“We are heartbroken to inform you that the [Phillips Fire] passed directly through the heart of our beautiful mountain,” Soldier Mountain announced on Facebook on Saturday. “Since the fire is still an active threat, we will have to wait to further assess the extent of the damage.” So far, it appears to be limited to just that, with homes and major structures intact—though the fire did destroy the access bridge to Soldier Mountain. Camas County staff are working to replace the downed crossing.

As of Tuesday morning, closures around the fire remained in effect. So did a restriction on aerial traffic over the area.

“Today, firefighters will monitor completed fireline, implement suppression repair, and be ready to respond to any new starts near the fire area,” a spokesperson for Great Basin Incident Management Team 3 said in a press release on Tuesday. “Suppression repair includes repairing hand line and dozer line by smoothing out the berm on the sides and creating water bars to help prevent erosion.

“We ask that the public stay away from the fire area for the safety of the firefighters and the public.”

On Monday night, Hailey Fire Chief Mike Baledge commended the hundreds of firefighters dispatched to the area since the fire began last Wednesday.

“The fire is pretty much out—good on them. There’s no active burning right now,” he said during a Monday council meeting. “There are some internal hot spots they’re watching, and they’ll be watching the edges over the next few days especially with possible lightning strikes on Wednesday.”

Emily Jones contributed to this story.

“We’re putting everything we have on this.”

Zero PPE being used by either firefighter? Clearly those are not members of the Ketchum Fire Department. They are, instead, members of the Ketchum Rural Fire District and it's contract partner, Sun Valley Fire Department. You can tell by the complete lack of PPE and training. Firefighting in baseball caps and flip flops? Completely unprofessional, untrained, amateur hour.....

Really, hark? I would rather have them there ASAP, getting things ready for those close behind them, probably with PPE.

You think these two responded from the Wood River Valley and got there early on and were there setting things up "for those close behind them"? Clearly, you don't know what you're talking about. PPE is mandatory, period. And that's a federal rule, not a local one. On a real department, they would have their credentials taken away. Only takes a second to put on a helmet and proper footwear.....at least, if you're well trained.