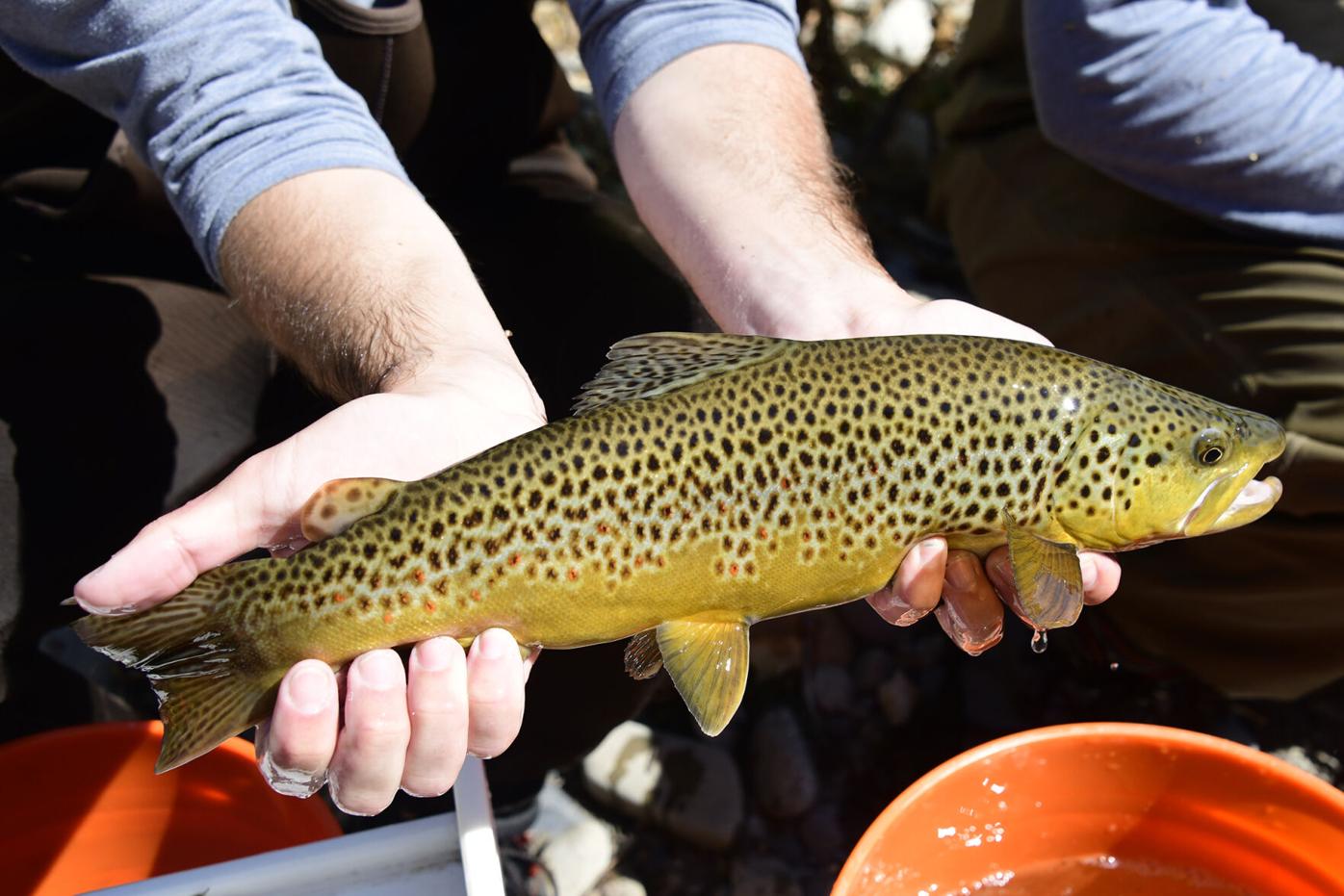 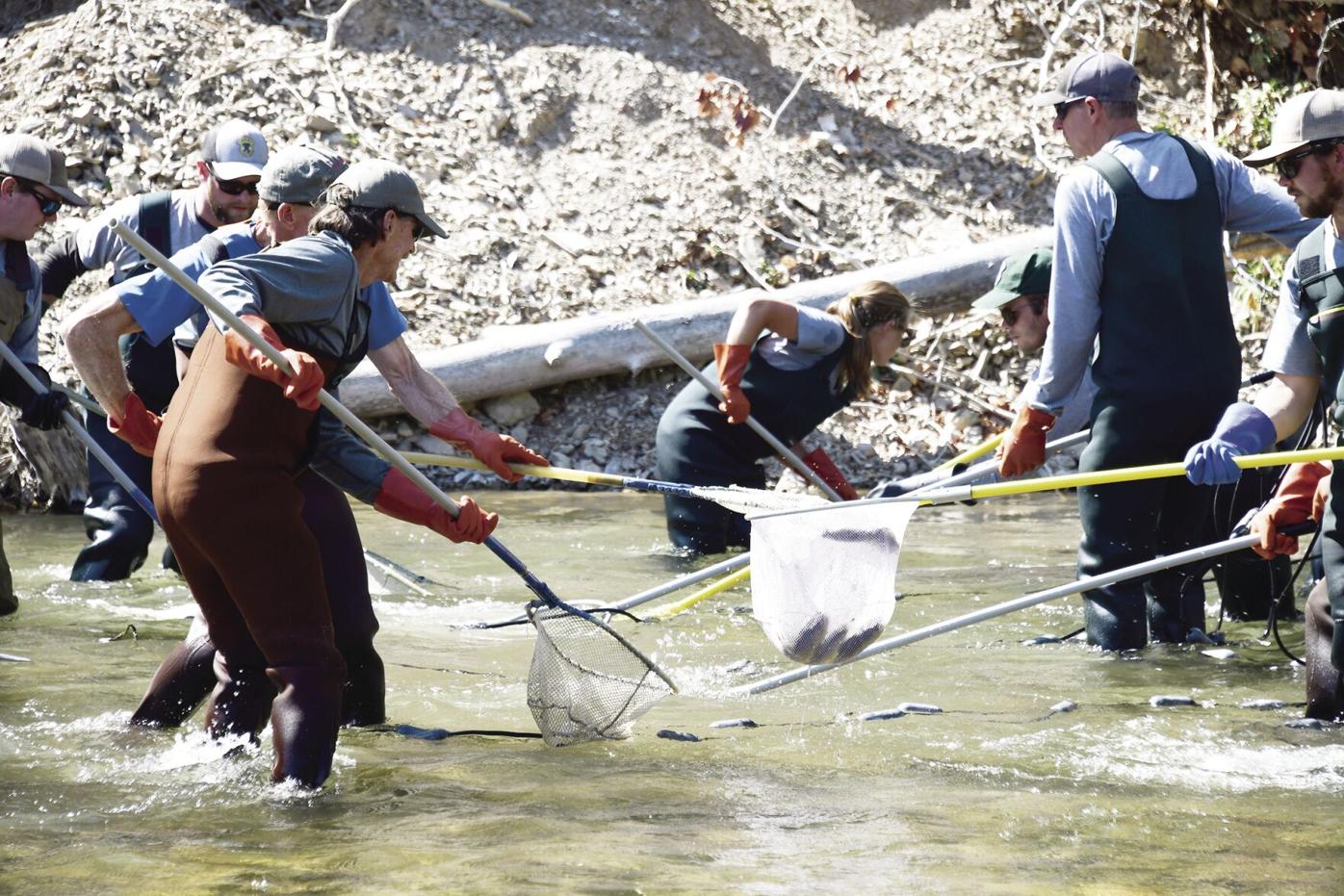 Fish and Game crews net fish on the Big Wood River near Hailey on Friday, Sept. 17.

A survey of fish populations on Friday in the Big Wood River where it flows through Hailey showed that brown trout outnumber the rainbows there.

The study of the Hailey stretch of the river is part of a larger fish count by the Idaho Department of Fish and Game that will continue through the end of the month and include reaches of the Big Wood at Gimlet and farther north in the Boulder Mountains.

The survey, which takes place every three years, is conducted using electroshock devices that stun fish into a sluggish state so they can be temporarily captured, measured and weighed, before being returned to the river unharmed.

The survey’s goal is to gain data on the number and sizes of a variety of fish species, including brook trout, rainbow trout, brown trout and mountain whitefish. The fish survey data has been used since the 1970s to monitor fish populations in what has become a very popular river for anglers.

The crew netted and measured hundreds of fish in a stretch of the river south of the Bow Bridge.

“We had a 21-inch brown trout and some long and snaky rainbow trout,” Thiessen said.

He said the rainbows could be in that condition due to age or lack of food.

“They only have four years to grow,” he said.

A bit farther downstream the crew of a dozen net-wielding Fish and Game employees, and a few volunteers, excitedly captured hundreds more fish. In a hundred-yard stretch, they hauled in a full load in a live-well on a raft, including a surprisingly large number of hefty brown trout, which are known to compete for food with rainbow and brook trout.

“The big news is that in this stretch the brown trout outnumber the rainbows,” Thiessen said.

Three years ago, the larger brown trout species, which was introduced from Europe in 1883, was still in the minority in the Hailey reach.

According to a 2018 Fish and Game survey report, the Big Wood had been seeing a decline in brook trout density and a simultaneous increase in brown trout density since 2012. The report states multiple possible reasons for the change: species competition (brown trout grow faster and bigger), landslides during the 2013 Beaver Creek Fire that impacted brook trout and nutrient loading in Magic Reservoir that benefit brown trout, which have as a result migrated upstream into Hailey.

The 2018 report showed that brown trout were still relatively rare in the northern reaches of the Big Wood. The current survey is expected to show if this has changed. Thiessen said the new survey report would not be completed until April.

Thiessen said due to historic conflicts over the various desires of local anglers, including some advocating catch-and-release rules and others not, the Big Wood has come to have the most complicated set of fishing regulations of any body of water in the state.

He said those differences led to litigation in the late 1970s. Times have changed, he said, as evidenced by a recent collaboration among irrigators, nonprofits and the Department of Fish and Game to help save and transport fish north from where the river went dry recently south of Bellevue. Some Trout Unlimited members who worked on the fish rescue last week said they would favor holding back more water in the river from irrigators to support fish populations.

Hailey resident Nick Miller said he supports a stricter interpretation of water rights law in Idaho, which favors the earliest claims on the water. The law is often characterized as “first in time, first in right.”

“Only the fish were here first, before the irrigators, so they should have the water first,” Miller said.

Whether the upstream migration of brown trout is considered a problem will likely be a topic of conversation next spring when Fish and Game holds a series of public gatherings to discuss the regional fisheries, including the Big Wood. Thiessen said that based in part on input from anglers at that time, fishing regulations could be tweaked to favor one species over another.

“We are in a better spot right now to satisfy everyone, including the fish,” he said. ‘The last time everyone was talking they ended up suing one another.”

“We are in a better spot right now to satisfy everyone, including the fish.”

Whether it is water rights laws or mining laws, we seem to be bound and determined to stand by and let what makes Idaho special auger into the ground.