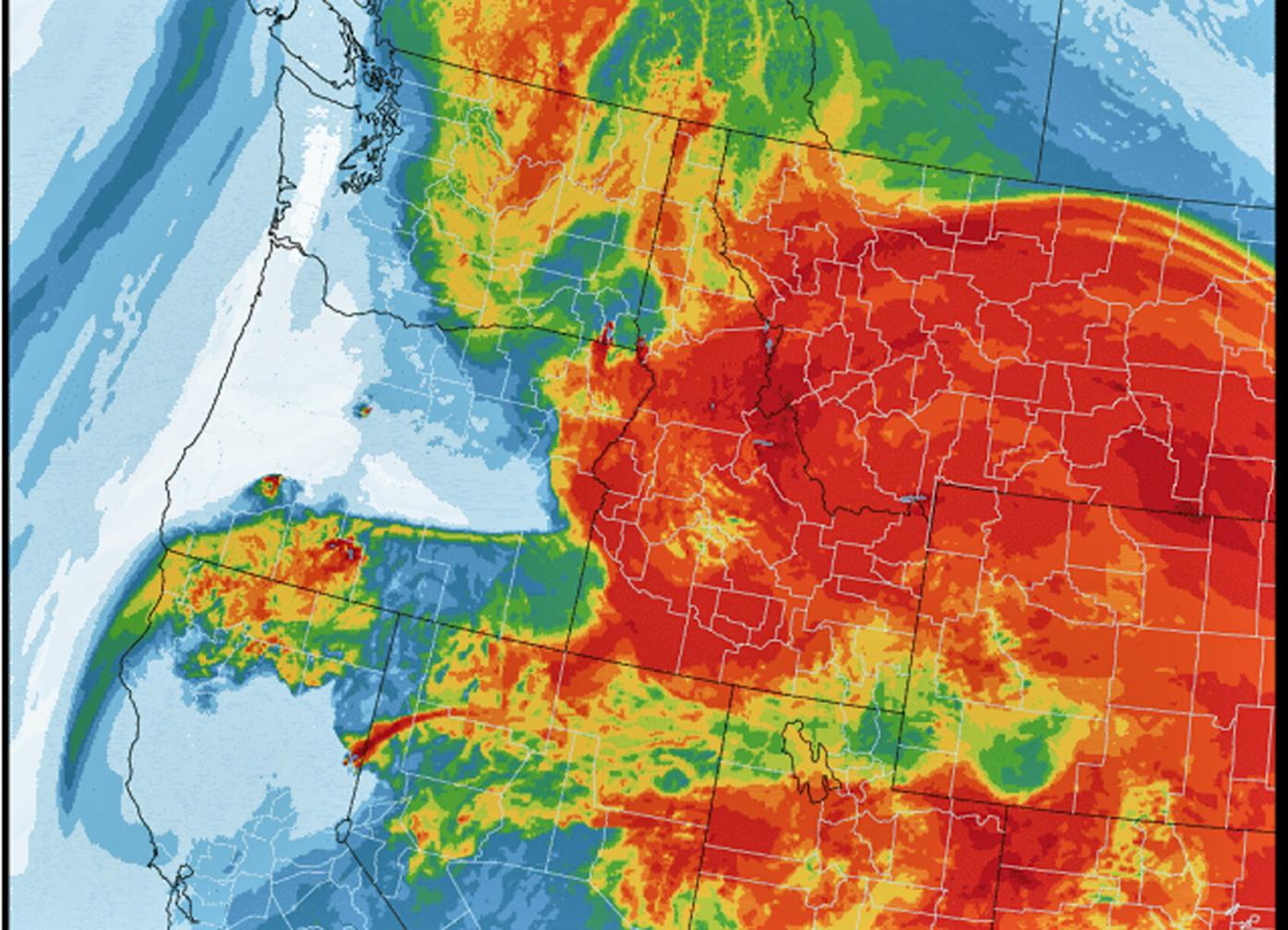 Smoke circulated throughout much of the state on Monday afternoon, causing moderately unhealthy to unhealthy air. 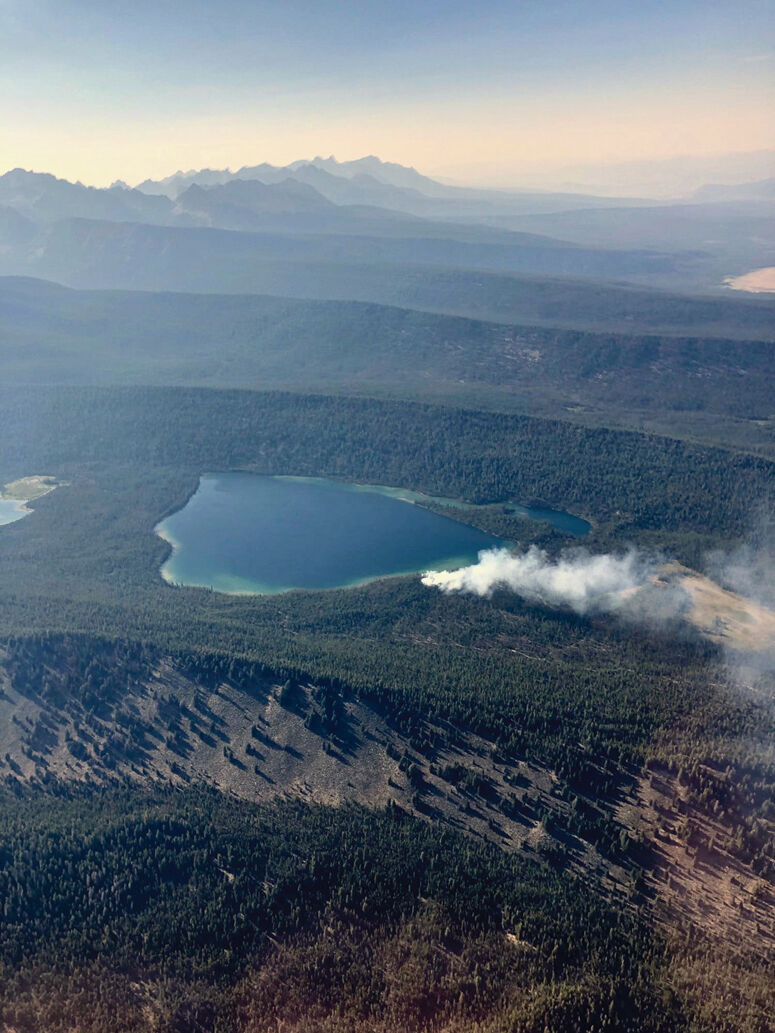 The one-acre Yellow Belly Fire, pictured here burning through lodgepole and fir stands on Saturday, is being investigated as human-caused.

An intensifying heat wave this week will make existing fires and possible new blazes much more difficult to contain, according to the U.S. Forest Service.

On Tuesday, the National Weather Service issued a red flag warning for the entirety of Blaine County and much of the Sawtooth National Forest indicating “critical fire weather conditions.” The region scored 6 out of 6 on the fire-predictive Haines Index, the Weather Service said. The Haines Index measures the dryness and stability of air over a fire.

Fire danger will only increase heading into the weekend as highs in the low 90s build to a blistering 100 degrees in the southern Wood River Valley and much of southeastern Idaho, further drying out timber and sagebrush.

Crews put out two fires in the Sawtooth National Forest over the weekend, according to the Forest Service.

Last Thursday, the Aspen Gulch Fire was spotted by a firefighter pilot near Mormon Hill, a remote area about 17 miles northeast of Hailey. The fire—located in Blaine County’s “exceptional drought” zone—grew to 65 acres by Friday afternoon. Helicopters, military aircraft and single-engine air tankers began suppression efforts on Friday using fire retardant, and additional crews arrived Saturday to improve the containment line around the fire and put out hotspots.

The blaze was cut back to approximately 37 acres and declared “contained” around 10 p.m. Saturday, Sawtooth National Forest spokeswoman Julie Thomas said. Its cause remains undetermined, she said.

A second, human-caused fire in the Sawtooth National Forest ignited over the weekend along Yellow Belly Lake, between Pettit and Redfish Lakes. The approximately one-acre fire was first observed burning in lodgepole and fir stands around 5:30 p.m. Friday. Firefighters established a containment line around the fire by 7:30 p.m. Saturday and fully controlled the fire on Monday afternoon, Thomas said.

“Full containment” indicates that fire personnel have established a fuel break around the perimeter of the fire but does not mean the blaze itself is out, while “full control” means that crews have mopped up spot fires and the fuel break is secure.

Two lightning-ignited fires in the Salmon-Challis National Forest should take longer to contain due to their more erratic behavior. Those include the 140-acre Fritzer Fire and the 4,050-acre Mud Lick Fire, ignited on June 22 and July 8, respectively. Both fires are burning about 20 miles west of Salmon.

Two-hundred fifty fire personnel are now on the scene of the Mud Lick Fire, which has caused a five-mile airspace closure due to its uphill runs and “extreme” fire behavior. The fire was 0% contained as of Tuesday morning and is not expected to be contained until Aug. 31, according to federal management site InciWeb.

Meanwhile, the Fritzer fire is 80% contained and its fuel break line should be finished by July 31. Several smaller one-acre fires continue to burn or have burned in the forest.

Amid the recent fire activity, the Salmon-Challis National Forest outside the Frank Church-River of No Return Wilderness announced on Monday that it will implement Stage 1 fire restrictions on Thursday. The restrictions, already in place in the Sawtooth National Forest, ban campfires and smoking with a few exceptions—campfires can be built on existing Forest Service grills if signs say so, and smoking is allowed inside enclosed vehicles and buildings.

“If you are in an area where campfires are allowed, if you light it, be prepared to fight it,” the Salmon-Challis National Forest stated Monday. “Should you start a wildfire, even if it’s by accident, you could be held liable for damages and firefighting costs.”

Wildfires hundreds of miles away in Oregon and California have already left their mark in the Wood River Valley. On Friday afternoon, smoke created a thick haze over Bald Mountain, and air in Ketchum was rated “unhealthy for sensitive groups” at 119 on the Air Quality Index.

“There may be brief periods of clearing [smoke] … but it will be temporary.”

“It’s OK to be active outside but take more breaks and do less intense activities. Watch for symptoms such as coughing or shortness of breath,” the agency suggests. “People with asthma should follow their asthma action plans and keep quick relief medicine handy.”

Central Idaho can expect a smoky week ahead, according to Sally Hunter, smoke analyst at the Idaho Department of Environmental Quality.

The region will see a combination of smoke coming from larger fires in the Pacific Northwest, such as the 154,000-acre Bootleg Fire in southern Oregon, and more regional smoke from Idaho, Hunter said in a Monday forecast.

“There may be brief periods of clearing over southern Idaho,” Hunter said, “but it will be temporary.”

I find the statement from the Salmon-Challis National Forest a bit refreshing ...." "if you light it, be prepared to fight it,”. However, we all know that most campers are not prepared. They do not carry water or a shovel.

But here is the real puzzle, WHY ARE ANY CAMPFIRES ALLOWED ANYWHERE IN IDAHO OR THE WEST? What gives?

It is very bizarre that the Governor of Idaho declared a state of emergency almost two weeks ago, and yet any unprepared camper could still go have a campfire. I understand state wide restrictions are finally going into effect tonight.

But why does the public tolerate this situation? The Forest Service, BLM and Idaho Department of Lands keeps telling us that “only YOU can prevent forest fires”. Baloney! Those agencies are responsible for a forest fire prevention plan and they do not have a plan that any reasonable person would find sound.

So why is does this situation exist? Like all other things that are bad for people, health and society…..there must be money involved. If anyone knows how money is related, please chime in. The only thing I can think of is that people who make money from fire fighting (like helicopter companies and heavy equipment companies), spend time lobbying against fire restrictions. If they are financially motivated to have a few fires to fight so they can get a per diem payout on their bulldozer, then let’s figure out a way to disincentive them from lobbying. Let’s pay them each and every day we do NOT have a fire for the opportunity to use their equipment if we DO have a fire. Like a retainer.

To illustrate this….from my work on EMS Boards in Idaho I learned that the majority of costs associated with municipal fire departments is the “stand by cost”. It costs money to keep the fire engines ready and maintained. It costs money to train the firefighters, and so forth. Even if we have ZERO structure fires in a year, we still incur these costs. This is as it should be. So as a community we should be figuring out a way to compensate the companies that own wildland firefighting equipment to simply “stand by” at the ready.

Ok maybe this is not the reason this bizarre situation exists. Maybe it is….as I have been told twice by the Forest Service….”Diane, folks just want to roast marshmallows”. Now that logic is deeply bizarre and disturbing. How is it fair, in any way, that someone who wants a campfire in a 100 year drought, can have one with absolute disregard for the hundreds of thousands of people who have to breathe unhealthy air, the thousands of firefighters who risk their lives, and the homes that can be lost, and the millions of taxpayer dollars spent.

And that is why the Forest Service, the BLM and the Idaho Department of lands MUST start acting responsibly regarding our forest fire prevention plan (if we even have one).

A fire is magic. Man`s fire is a primitive security blanket, an expression of freedom, control and dominion over nature. Fire restrictions are a threat to independence and the connection Man has to the planet. Fire restrictions represent the failure of the Forest Service to protect Man`s liberty. (I don`t believe a word I say [wink]0.