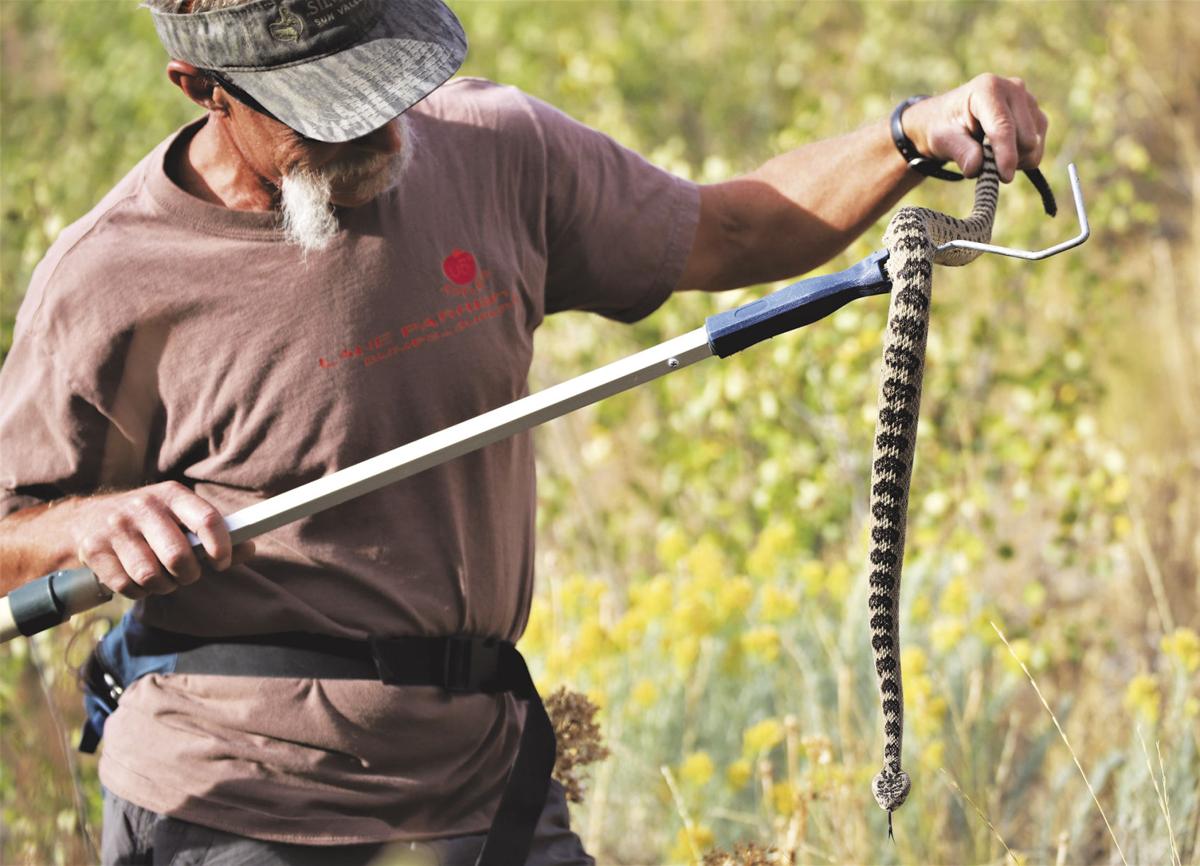 Alan Rickers uses a snake hook to display a Great Basin rattlesnake. Though rattlesnake bites can prove fatal, Rickers says the reptiles will avoid confrontation at all costs. 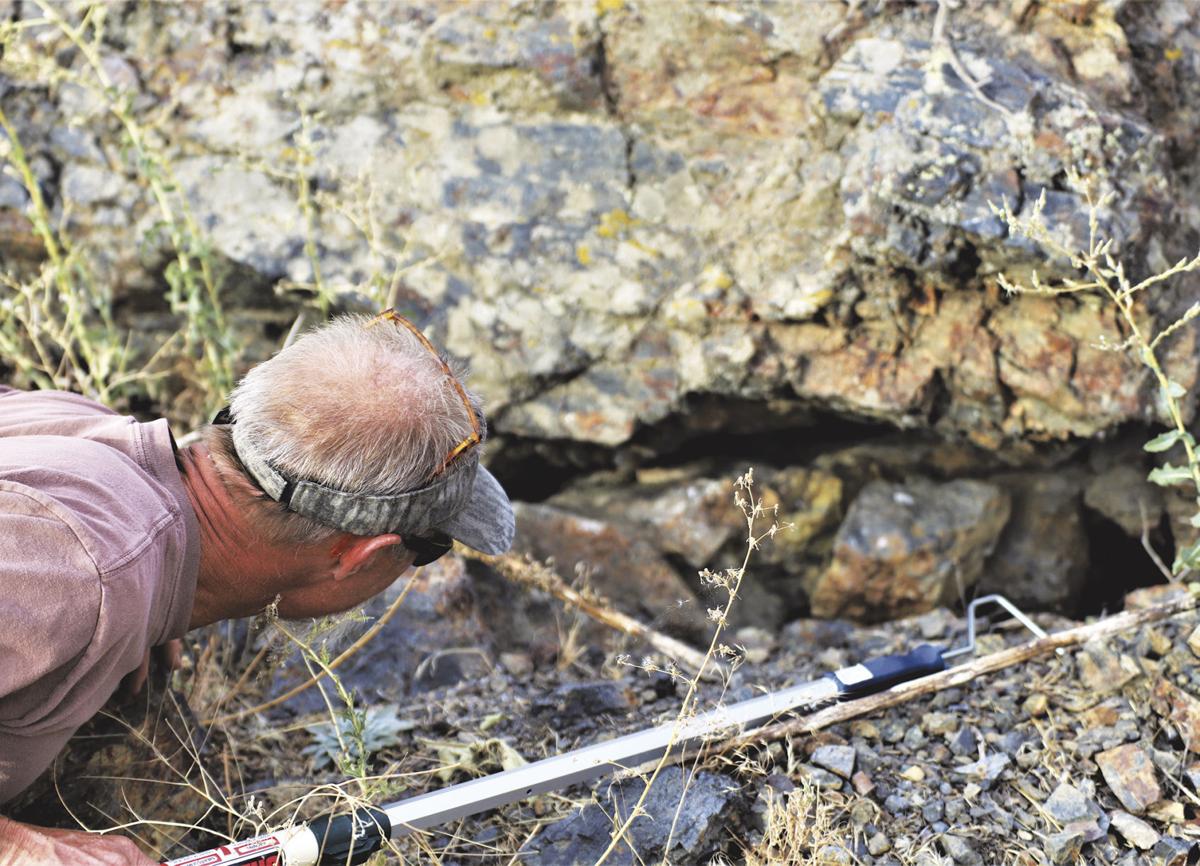 Rickers inspects the entrance of a popular rattlesnake den, or “hibernaculum,” in Croy Canyon. Every fall, generations of Great Basin rattlesnakes return to the same hibernacula to mate and settle in for winter.

It’s early September in Croy Canyon—the wheatgrass is brittle from warmer days, and every step along the gravel road sends grasshoppers flying for cover.

Alan Rickers’ truck hums behind us. It’s 6 p.m., a Thursday, and the sky is overcast and windless—“It doesn’t get much better than this for snake-watching,” he says.

He crouches down to examine faint crisscrosses in the gravel.

“You almost always see tracks going across here,” he says. “This is one of the busiest crossings.”

He traces one of the lines out to the grass. It’s fresh, he affirms.

This is how Rickers’ love affair with Great Basin rattlesnakes started 15 years ago, when he first began jogging through the canyon. On a whim, he followed one of the road-crossing reptiles to its den up the hill; 18 others were basking near the entrance.

“I could smell them from feet away,” he recalls. “You don’t forget that scent.”

We hop back in his truck and continue up the foothills of mullein and sagebrush, gravel crunching under the tires. He cuts the engine.

“We’re going to take a little hike,” he says.

Rickers has been drawn to reptiles for his whole life. Hooked on dinosaurs as a kid, he used to go out lizard watching, kept snakes as a teenager and bred boas as an adult. Though the 47-year Wood River Valley resident hasn’t formally studied herpetology, he’s a walking encyclopedia on snake behavior.

“If someone says you have to get bitten by a rattlesnake, and you get to choose your snake, the Great Basin would be a good candidate,” he says, sensing my apprehension.

With Rickers in front, we walk through a grove of aspen trees on a thin trail carved out by moose and elk. While he ambles ahead, parting the brambles and tall grass with his snake hook, I freeze at every snap of a branch.

It’s the thought of rattlesnake venom—potent enough to melt away tissue and turn human blood into a viscous, congealed jelly—that makes me want to run.

Then a loud buzzing goes off.

Rickers dives into action, searching through the brush with the zeal of the Crocodile Hunter. The buzzing, a strange blend of a cicada and a high-voltage power line, gets louder.

When he stands up, a giant snake is writhing on his hook.

An emblem of magnanimity

The Great Basin rattlesnake—Crotalus oreganus lutosis, Latin for “rattle, Oregon, full of mud”—is actually a subspecies of the Western rattlesnake, whose range spans from the Baja Peninsula up to British Columbia and as far east as Colorado.

Based on territory and coloration, Rickers can recognize a handful of snakes in western Hailey. There’s the huge blonde one about a mile down the road, for instance, and two or three charcoal-colored morphs he visits.

They all have their own personalities, he says, but share something in common: They’ll do anything not to fight. The same philosophy applies to hunting.

“They’ll strike a gopher, retreat and wait for the venom to work before eating it,” he says.

Since being scooped up, the first snake we encountered has fallen silent. Though he can’t be 100 percent sure, Rickers thinks he has a calming effect on the reptiles.

Though not yet at its maximum 5-foot length, the snake on Rickers’ hook commands respect with its furrowed brow and downturned mouth.

Rickers sets it down gently. “See you in the spring, buddy,” he tells it.

As the snake clumsily uncoils itself and looks for an escape route, I wonder if perhaps Ben Franklin was right when he penned a letter to the Pennsylvania Journal in 1775: “The Rattle-Snake … is an emblem of magnanimity … she never wounds ’till she has generously given notice, even to her enemy, and cautioned him against the danger of treading on her.”

In September and October, Great Basin rattlesnakes return to Croy Canyon from miles around the valley as they head back to their dens—or “hibernacula”—to breed and settle in for the winter. Rickers points out an exposed rock face hundreds of feet above, a popular overwintering site.

We’re headed there next. The terrain is ankle-twisting; if I don’t lean forward with every step, piles of volcanic rock give way and tumble down the ravine.

Rickers hands me his snake hook and easily maneuvers up to the hibernaculua, which resemble small caves. His steps are deliberate and light; part of the reason he treads “like an Indian,” he says, is to avoid detection by other hikers and hunters who may want to harm the snakes.

“It’s really important for these guys to be able to come home every year,” he says. “If someone came in with gasoline and burned out the dens, they would kill off most of the population.”

For that reason, he refuses to give guided tours and often dresses in camouflage, crouching down out of sight when other hikers approach.

He also requests that I don’t disclose the den locations for the snakes’ own safety.

“The less they have to do with people, the better,” he adds.

It’s clear that Rickers has a great deal of respect for the land, too. After all, he’s seen its rise and fall, and now its regeneration: razed by the 115,000-acre Beaver Creek Fire six years ago, much of Croy Canyon was reduced to a thick layer of soot.

Rickers was on scene before firefighters arrived.

“All the willows were gone, the beaver ponds were gone,” he says, pausing. “A lot of the snakes burned up, but I went back in the fall and checked on one of my dens, and saw four snakes. They’d made it.”

With the sun finally peeking over Kelly Mountain in the distance, Rickers stops to admire the view.

“It might be the worst place to walk your dog,” he says, “but this place is special. It’s magic out here.”

He’s interrupted by a sudden buzzing.

In one of the den’s entryways, a rattlesnake eyes us lazily while its roommate retreats into darkness. The remaining snake produces different rhythms with its rattle before fizzing out and going silent.

“It might be the worst place to walk your dog, but this place is special. It’s magic out here.”