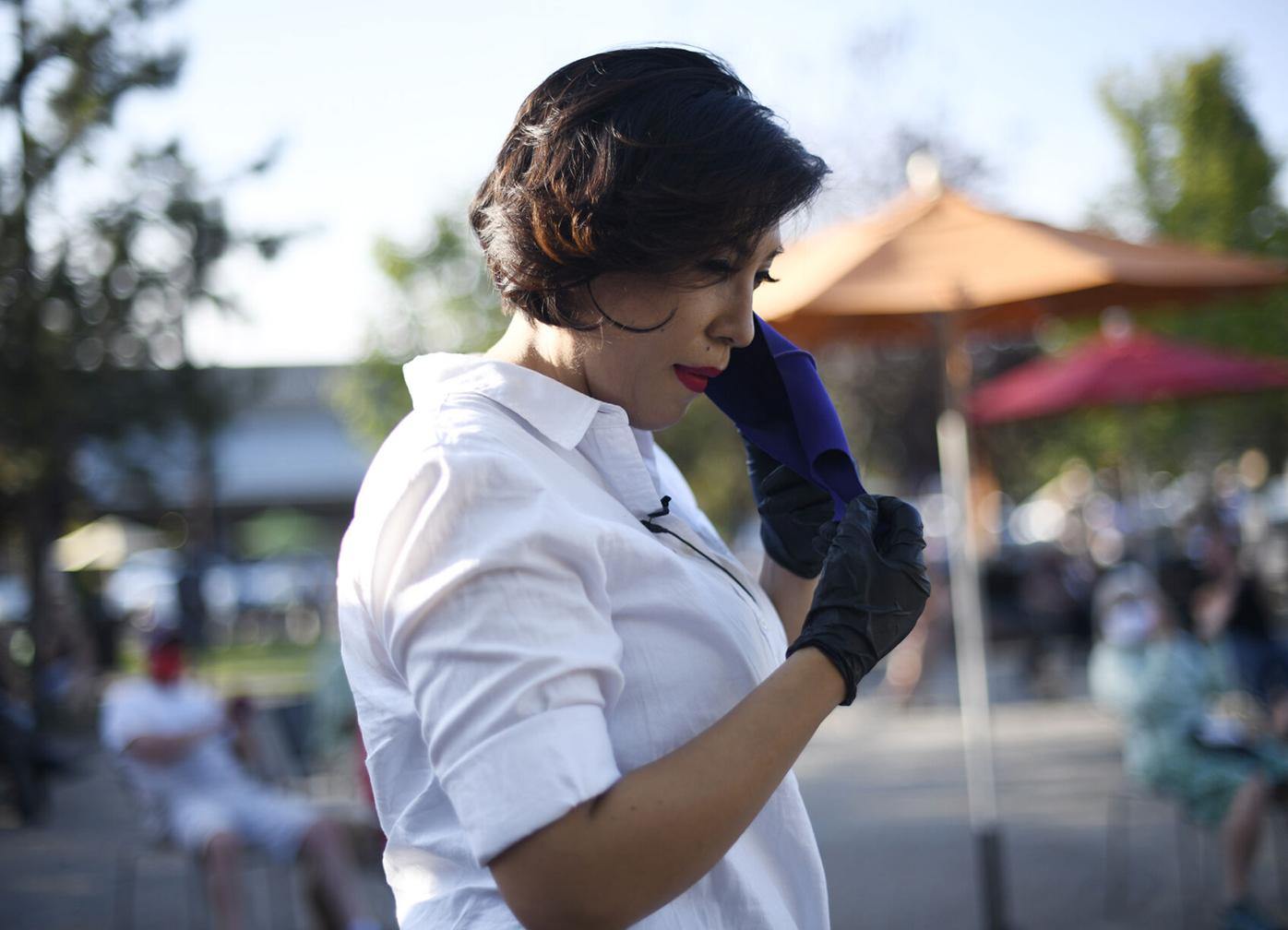 About 50 people turned out to see U.S. senate candidate Paulette Jordan in Ketchum on Saturday, Sept. 5. 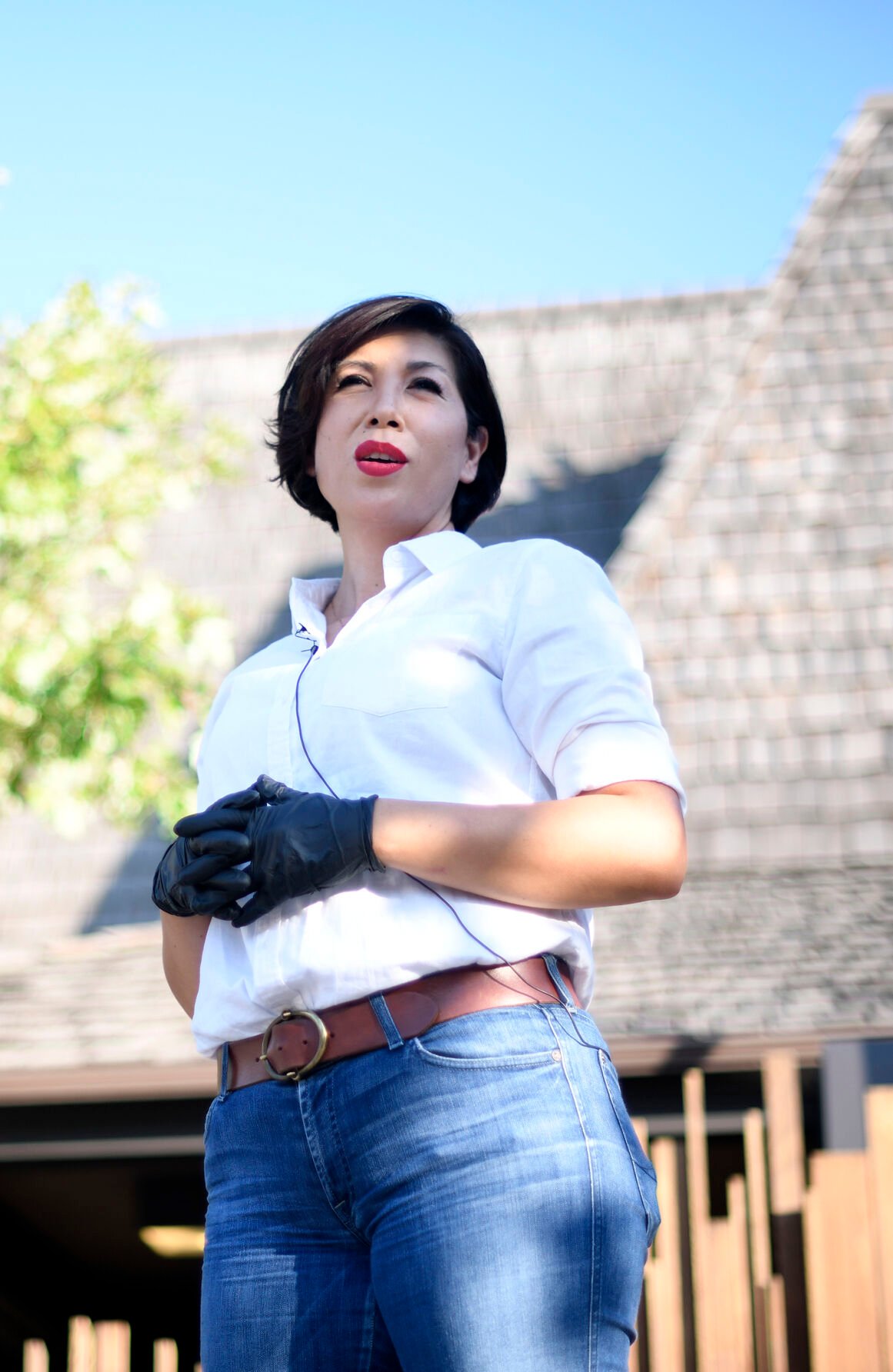 Paulette Jordan, a Democratic candidate for U.S. Senate, stopped in Ketchum Town Square on Saturday as part of her tour of southern Idaho.

Paulette Jordan, former candidate for Idaho governor and current Democratic candidate for U.S. Senate, made a stop in the Wood River Valley on Saturday for a town hall in downtown Ketchum.

Jordan, who is challenging Sen. Jim Risch for his seat, delivered brief comments to the 50 or so people gathered in the Ketchum town square before taking questions from the socially-distanced and mostly-masked crowd.

“In 2018 I came here, and in 2018 I said, ‘We need more humanity, more empathy, more love,’” Jordan told town hall goers, referring to her campaign for governor against now-Gov. Brad Little. “We need ambassadors of the environment. We need warriors for the people.”

Two years later—in the midst of the COVID-19 pandemic—those values are needed more than ever, Jordan argued.

Saturday marked Jordan’s first public appearance in the Wood River Valley in her campaign for the U.S. Senate—one stop of many in the campaign’s tour of southern Idaho, which began in Driggs on Tuesday and will wrap up with a virtual town hall in Salmon next Thursday.

A member of the Coeur d’Alene Tribe and a native of north Idaho, Jordan served on the Coeur d’Alene Tribal Council before running for the Idaho House of Representatives in 2014. She served one term and was elected to another before leaving the Legislature in 2018 to run for governor. She won the Democratic nomination but ultimately lost by 21 percentage points to Little in the general election.

“We have to break up the corporate greed and corruption, the divisiveness and the hatred and the racism,” Jordan told the audience on Saturday. “But none of that ends, it doesn’t end, until we sign up to register and vote.

“We cannot wait one more day, one more week, one more year, one more election cycle to be moved to take action,” she continued. “I’m not just talking about the climate crisis we’re in. I’m talking about the political and financial crisis that we’re in. There are too many people suffering, and it should not be his way. Even here in Ketchum.”

Questions from the audience included a question from a 10-year-old boy about how best to address the current financial crisis that has arisen from the COVID-19 pandemic, a question that elicited applause from the crowd.

“[Your senator] should be working on bipartisan legislation for COVID relief funding that will go back to the people, because we have to inject funding into the middle class,” Jordan said in response. “When people are spending and supporting local businesses, it helps our economy thrive again.”

I wish this rag of a liberal excuse for a paper would cover the local GOP as closely. No mention ever of the upcoming debate between Parker and Stennett sponsored by CI4L.org. That flies under their radar. But what do you expect, Clint had a piece of this paper back in the day.

Get honest because you aren't a very good liar.

From the August 5th edition below.

'“We cannot wait one more day, one more week, one more year, one more election cycle to be moved to take action,” she continued.'

Yawn... In other words, 'We are the ones we've been waiting for.' Barf!

Jim Risch...backed by the , Alt. Right, The Real 3%ers, White Nationalists, KKK, to name a few groups that support him.

So do you think any of the members of those mentioned groups will be voting for Paulette???

No one will be voting for her. She will be a two time loser like she deserves.

You're making stuff up, fishhog. Your child-like logic is embarrassing.

fish, KKK is a democrat organization. They want their slaves back.

You sure, or just drinking the kool aide? Prove it or shut the f up!