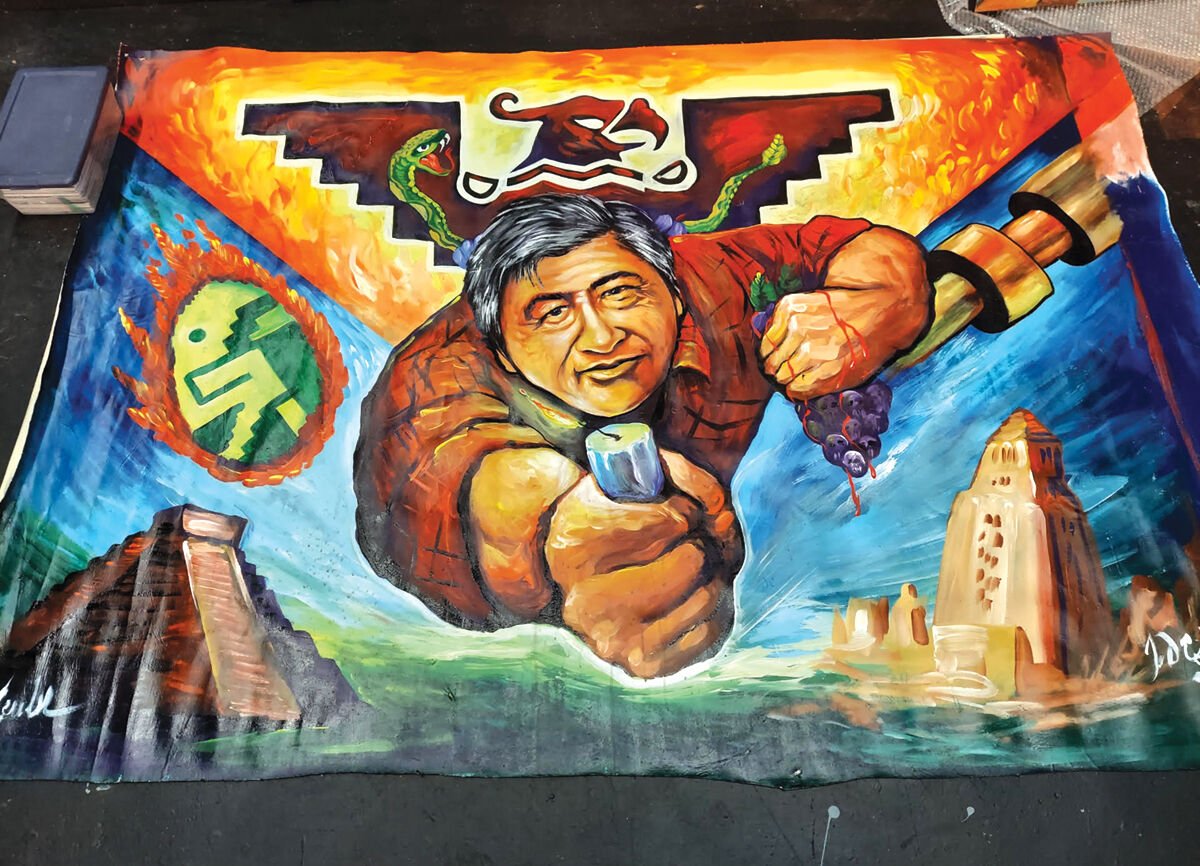 John Zender Estrada’s painting of Cesar Chavez is on display at The Spot in Ketchum.

Marchers locked arms in Ketchum on Tuesday, March 23, to celebrate the life of Cesar Chavez.

When Herbert Romero’s son was 10, he was assigned a school project that asked the question: “Who is your hero?”

Rather than choose a fictional character, friend or family member, he turned to his father for advice. Romero suggested that he research farm labor activist Cesar Chavez—a pivotal figure in Romero’s own life.

“The new generation doesn’t really know about him,” Romero told the Mountain Express in a phone interview. “I talk to many young people in the valley, and they don’t have an understanding [of his work].”

It was his son’s project that inspired Romero, two years later, to help bring awareness of Chavez and his legacy to a larger number of young people in the Wood River Valley. This week, Chavez’s grandson Eduardo, a filmmaker, visited Blaine County to meet with members of the community and show his new documentary about his grandfather, “Hailing Cesar.”

While a number of young people attended a showing of the film at The Community Library on Tuesday, marching down Ketchum’s Main Street with signs reading “Sí se puede”—the motto of the United Farm Workers of America—before the event, Chavez also came directly to local high school students in a virtual conversation last week organized by Wood River High School’s Nosotros United club.

For Aaliyah Rojas, a senior at Wood River and president of Nosotros United, the film and discussion hit home: After Rojas’ grandfather immigrated to the United States, her mother grew up picking sugar beets in southern Idaho.

“She got paid so little,” Rojas said of her mother. “If it wasn’t for everything Cesar Chavez did at the time, she probably would have gotten paid way less. Having that background in my family made [the project] more sentimental for me.”

“Past, present and future voices: that’s the goal.”

Rojas said she believed Chavez’s story would hold personal meaning for a number of the other 500 students at Wood River who ultimately viewed the film as well.

“It was a perfect film that connected not only with one student but many students, because a lot of our school is made up of Latino students, and many have this background,” Rojas said.

One of those students was sophomore Adan Hernandez, marketing director of Nosotros United, whose parents worked as farm workers after moving to the U.S. To prepare for the conversation with Chavez, Hernandez produced a short introduction film with his fellow students, in which they described their thoughts on, and personal connections to, Cesar Chavez’s story.

“I really felt a big connection seeing this documentary,” Hernandez told the Mountain Express. “And those [students] who didn’t connect could see what some of our parents went through.”

Romero first came up with the idea to bring Eduardo Chavez to the Wood River Valley at the suggestion of his friend John Zender Estrada, who had been involved in the making of “Hailing Cesar.” A Los Angeles-based artist who has painted Cesar Chavez, Estrada also visited Blaine County this week as part of the commemorative events, with his work on display at The Spot all day Tuesday.

“It takes more than one person to make a change, and that’s what [Eduardo Chavez] is working for.”

For Romero, learning about Cesar Chavez’s work as a young man was a sort of turning point. He first familiarized himself with Chavez’s organizing work when he was 23 and his mentor at the time took him on a trip with a surprise destination. That destination ended up being Chavez’s burial, attended by an estimated 40,000 people in 1993.

“It was an awakening, and from there I followed him,” Romero said.

To Romero, the significance of Chavez’s work lies in the fact that “he was a policy-changer—not just a protester.”

“I think that’s what we need to continue,” Romero said. “It’s not just about conversations and talking, but let’s do something about it. Let’s take action.”

Nearly 30 years later, the high-schoolers’ discussion with Eduardo Chavez was something of an awakening for Rojas, too. Prior to the conversation, she said, she had never really discussed her opinions on migrant labor with anyone outside her family.

“It’s a touchy subject for a lot of people,” Rojas said. “A really touching moment was learning that I wasn’t the only one who saw those injustices. There were other people. It takes more than one person to make a change, and that’s what [Eduardo Chavez] is working for.”

On Tuesday night, roughly 40 people joined the march through Ketchum. Some had traveled from hours away—from Twin Falls, Burley, Gooding, Boise and even Utah—for the event. Marchers locked arms—literally and, in the eyes of Romero, symbolically.

“We have to step back, lock arms with [young people], help them continue different legacies and help them cultivate that leadership,” Romero said. “Past, future and present voices—that’s the goal.”

After the civil rights movement movement peaked around 1970, leftist activists targeted Mexican migrant workers as their next political identity group and raised Chavez, who was then a small time activist, to national prominence. Against the sentiments of many in the mexican-american community, they set to identify that community as separate from its growing assimilation into American society and Chavez was their poster boy. They wildly succeeded by creating the Hispanic identity and were another step down the road to where we find ourselves today---a nation of separate competing identity groups which are pulling the country in different directions for their unique benefit. While Chavez had success in improving the lives of migrant workers, the leftist academics who were his earliest supporters, had larger goals in mind...to deconstruct America from within. Of course Chavez is now celebrated and our students are getting a highly politicized view of his life. Read "the Plot to Change America" by Michael Gonzalez to learn about this strategy to change America from its post WWII beginnings to the present. It's a well researched look at the tribalization of America.

That the “book” you tout is promoted by The Heritage Foundation (a right wing think tank) speaks volumes about the historical merits of its contents.

One of my favorite Amazon reviews, by Victoria:

“Hilarious but impossible to get through without throwing up. This guy writes like a highschool student trying to meet the minimum amount of words for their essay. Not to mention the thinly veiled racism, sexism, homophobia and transphobia”