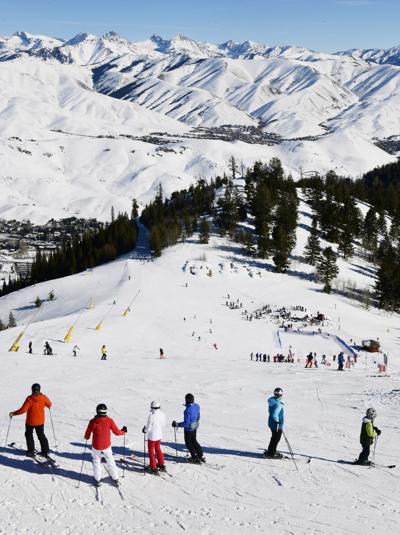 The famous groundhog Punxsutawney Phil saw his shadow and effectively predicted six more weeks of winter on Wednesday, Groundhog Day, in west-central Pennsylvania. Though the prognosticating rodent has been known to be wrong sometimes, there’s little doubt many residents and managers of Western mountain resorts are hoping the prophecy rings true, bringing not only cold temperatures, but more snow.

In Sun Valley, after a bountiful December that brought snow by the foot, January was marked by abundant sun and little precipitation, as a strong ridge of high pressure forced storm systems aside.

Dan Valle, lead forecaster at the National Weather Service office in Pocatello, said the high-pressure system that has been hovering over much of the West since early January has been pushing storms to the north, where they then drop into Montana, Wyoming and the plains.

“It’s not letting anything pass through,” Valle said.

Sun Valley Resort has been making snow at Baldy and its smaller ski area, Dollar Mountain, in recent days, as cold, clear weather continues to dominate the region.

“Only Mother Nature knows what is truly in store for us.”

Peter Stearns, the resort’s director of mountain operations, said Thursday that the cold temperatures have allowed the resort to use its vast snowmaking system—coupled with its trail-grooming teams—“to enhance the already great skiing and riding experience.”

Sun Valley reported having 99 trails open on Baldy on Thursday, 44 of them groomed. Conditions on the mountain were “machine groomed” and “packed powder,” the resort stated on its website.

As for whether the powder days enjoyed by many skiers and riders in December will return, Stearns implied that mountain enthusiasts can only hope Punxsutawney Phil is right.

“Only Mother Nature knows what is truly in store for us,” Stearns said. “But with any luck, we will see a shift in the high-pressure weather pattern soon,” he said.

Bridget Higgins, the resort’s director of marketing and public relations, said the 2021-22 winter season has been “great” so far, with December snowfalls making for “a powder-filled holiday season.” However, the COVID-19 pandemic continues to cause some staffing shortages, she said.

“Our staff and business is not immune to the challenges created by the recent spike in COVID cases, but fortunately our team has been able to rally to maintain a high-quality experience for our guests,” Higgins said. “You may have even seen the resort leadership team, including ownership, helping in operations during the holidays, which was needed this year.”

“You may have even seen the resort leadership team, including ownership, helping in operations during the holidays."

As the winter season progresses from February into March, most Western mountain resorts are often measuring three-digit snow depths.

Valle said the massive high-pressure dome in the region is expected to last at least through mid-February, when models predict that some weaker storm systems might encroach. The Weather Service is predicting a “slightly above-average chance” of snow in the second half of February, he said, though some systems could still bypass central Idaho.

“There is some hope,” Valle said.

One of the nation’s leading travel publications, Condé Nast Traveler, published in late January a feature story that tells readers how to get the most out of a visit to Sun Valley in the winter, when it “really sparkles.”

The story, “How to Spend a Winter Weekend in Idaho’s Sun Valley,” gives advice on how to get to Sun Valley, what to do, where to eat, and where to stay. It highlights activities and events, as well as several businesses and the region’s history, including its links to acclaimed author Ernest Hemingway.

To read the story, go to https://www.cntraveler.com/story/sun-valley-idaho-eat-stay-play.