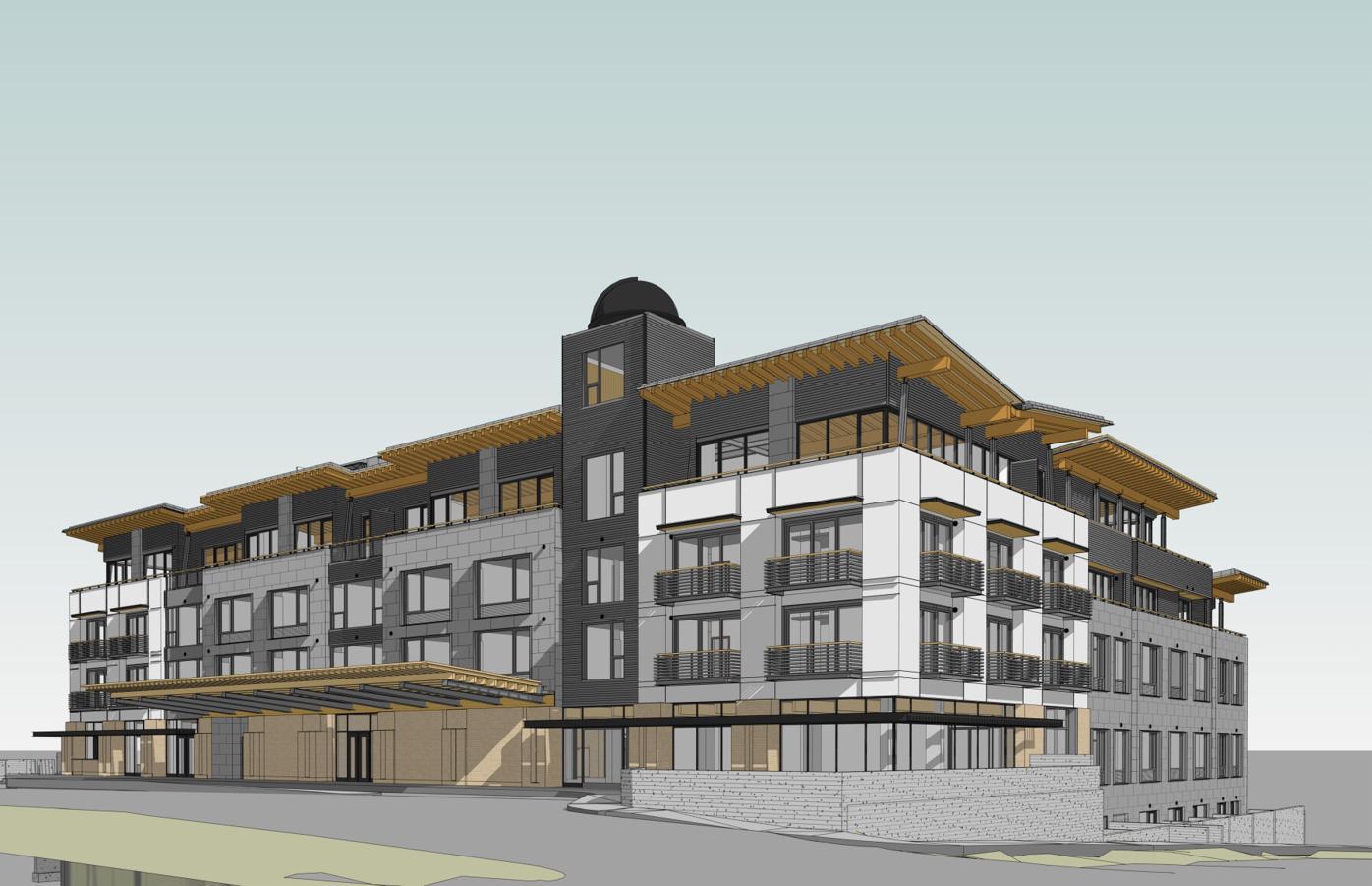 A new hotel company has released preliminary renderings of the project it has planned for 300 River St. E. in Ketchum, if approved by the city. 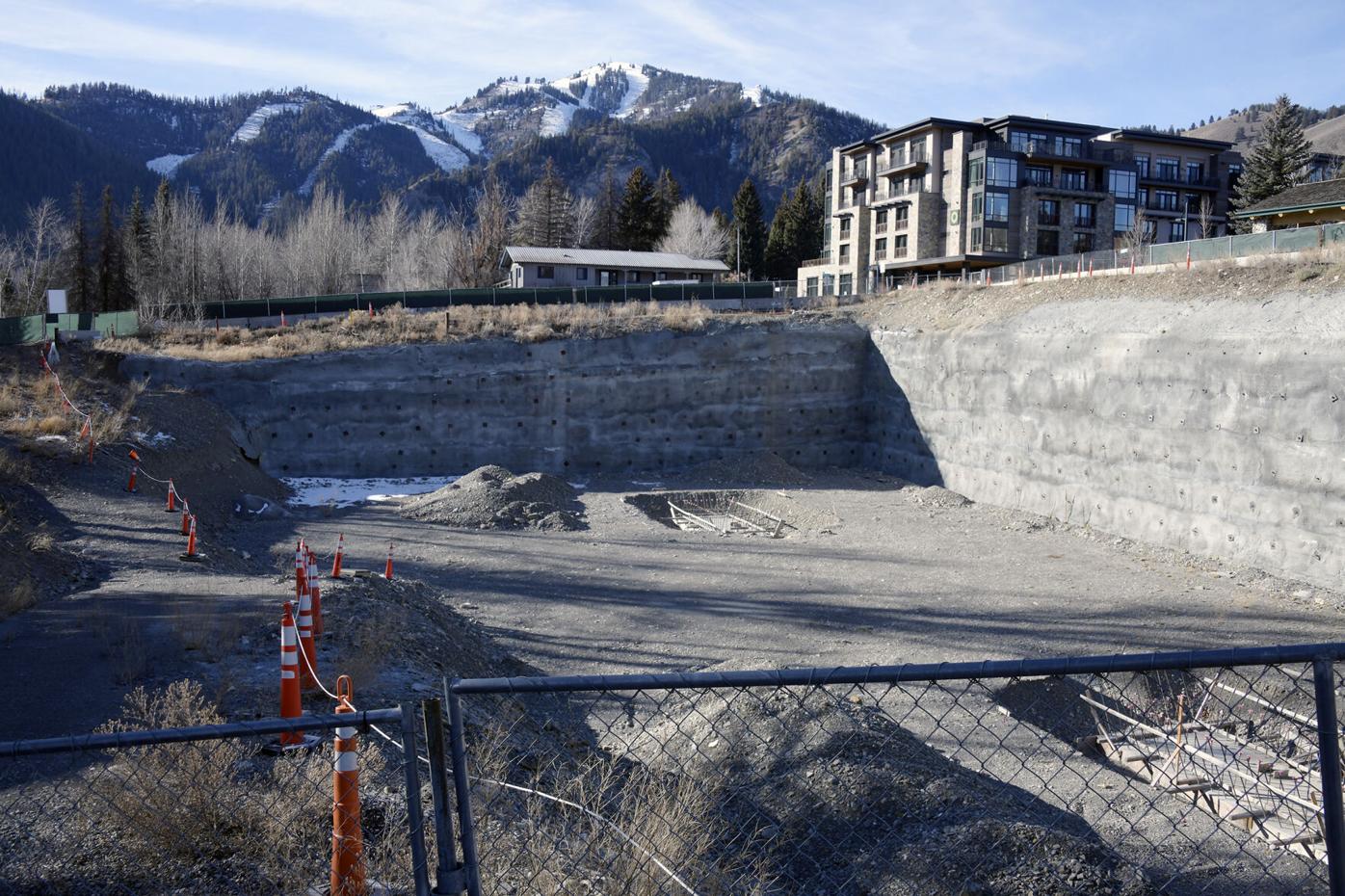 The site of the proposed Harriman Hotel project was formerly a rustic shopping center with two restaurants. Excavation of the site started in 2016 and construction fully stalled in 2020. 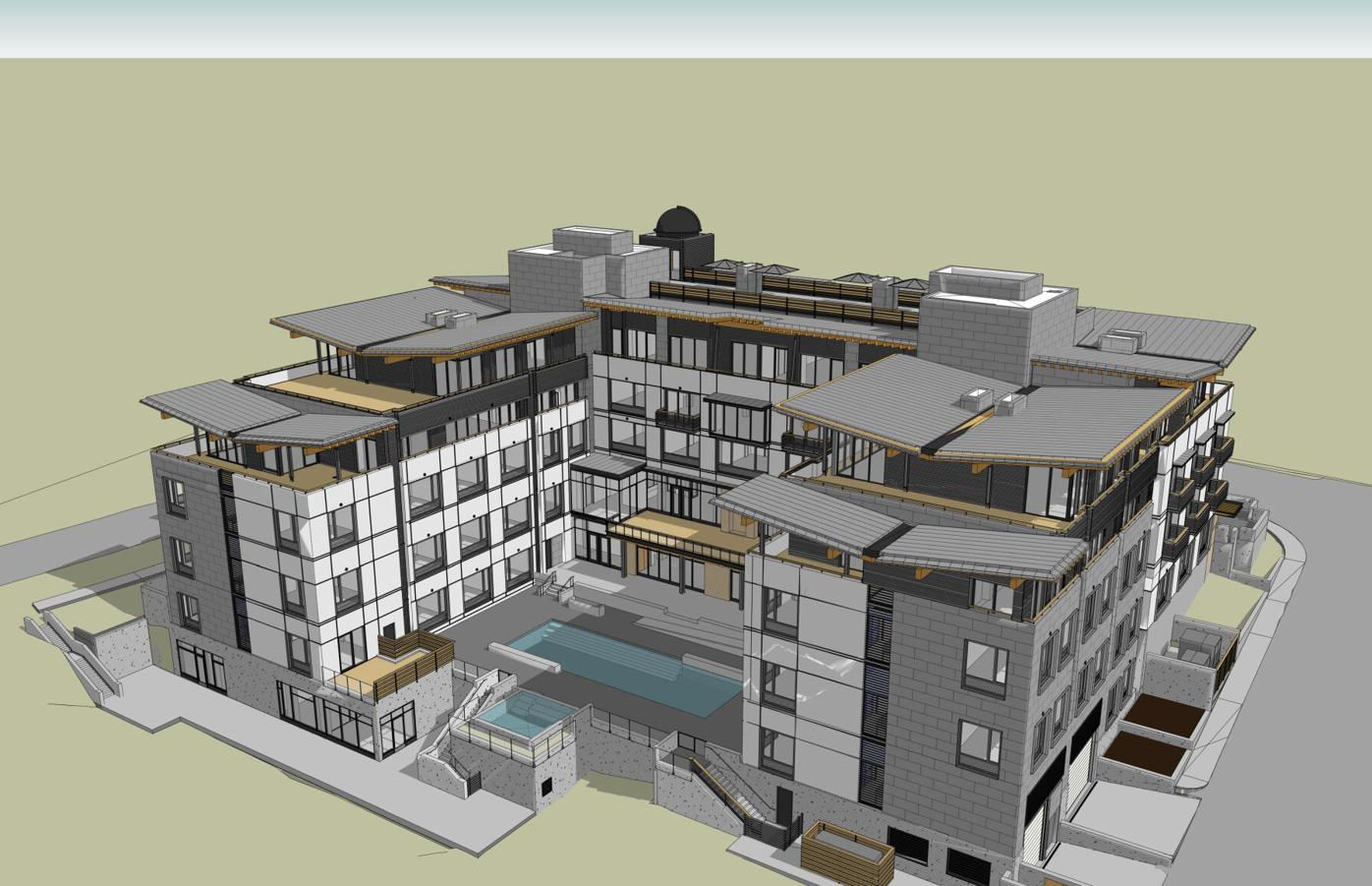 A preliminary rendering of the proposed project, as seen from the rear of the building.

The city of Ketchum and the developer behind delay-plagued plans to build a luxury hotel at the southern entrance to the city have come to a tentative agreement to revive the project behind investment from a new partner.

The city on Thursday released a draft settlement agreement with developer Jack Bariteau and his company, Harriman Hotel LLC, that could bring a hotel project to the site and end a standoff that included the company filing a $100 million tort claim against the city and some officials. The City Council is scheduled to consider the proposed draft settlement agreement at a special meeting at 4 p.m. Thursday, June 23, at Ketchum City Hall.

Harriman Hotel LLC, owner of the hotel project and site at 300 River St. E., “has secured an investor who is prepared to bring the remaining capital necessary to construct and complete the project,” the city stated Thursday in a news release.

On Wednesday, acclaimed chef Charlie Palmer and Four Seasons hotel veteran Christopher Hunsberger announced the launch of a new “culinary-first” hotel brand, Appellation, with one of the first hotels to be opened in the Sun Valley area. A company spokesperson confirmed Thursday that the Appellation hotel is planned for the 300 River St. E. site, on the southeast corner of River and Main streets.

However, approval of the draft agreement would have to come first, said Lisa Enourato, spokesperson for the city.

“This is not a done deal,” she said. “We really want to first hear from the public on this.”

The project site is currently a large hole, after construction of the 65-room, 14-residence hotel structure stalled in 2020.

The project has a long history that dates back nearly 15 years. In June 2008, Bariteau cleared the first hurdle of approval for a project called Hotel Ketchum—now the name of a different hotel farther north on Main Street. Plans went through different iterations after the Great Recession halted most development, and the Harriman Hotel project was eventually approved by the city.

Over the years, the City Council granted extensions and various amendments to the development agreement, which included timelines for completion of the project. The most recent extension was a 2018 amendment to the development agreement, which included a condition requiring proof of construction financing for the project and a $453,000 site restoration bond.

In November 2020, the city deemed Harriman Hotel in breach of the 2018 development agreement for failure to provide proof of project financing. A 60-day “cure” period was initiated to meet the financing terms of the agreement.

That month, Harriman Hotel’s attorney issued the “notice of tort claim” to the city for up to $100 million in damages. A tort claim is a civil action taken outside of court that alleges a “tort”—or civil wrongdoing—and typically demands damages for that wrongdoing. A notice of tort claim essentially gives a public agency notification that the claimant has a formal complaint and—if the matter is not resolved to the claimant’s satisfaction outside of court—could ultimately choose to file a lawsuit against the agency.

The city then sought to secure the site restoration bond to remediate the excavated site. However, “the insurance company that issued the bond has so far denied the city’s request for the bond,” the city stated Thursday.

The city also stated that “Harriman Hotel LLC asserts that the effects of the COVID-19 pandemic and its economic impacts be construed as force majeure considerations to extend the timeframe to cure the breach. Force majeure would allow an extraordinary event or circumstance beyond its control to release the owner from a contractual obligation.”

Now, the city and City Council are seeking public comment on the proposed settlement agreement that would reinstate the 2008 project approvals and clarifications made in 2016. The new investor, called Harriman SV Properties, has conditioned participation on the City Council reinstating the project’s development rights and the city and the owner resolving their disputes through the settlement agreement.

The settlement agreement would also:

A new financing arrangement has been entered into between Harriman Hotel LLC and entities controlled by Andrew Blank, the city stated Thursday.

“Blank and his father, Jerry, have long-term family ties to the cities of Ketchum and Sun Valley, and a history of investing in similar types of hotel projects,” the city stated.

Blank has proposed changes to the project that would require the new company to go through a full process of approvals by the Ketchum Planning & Zoning Commission, the city stated.

“If the commission denied the changes, the project could still move forward with the reinstatement of the 2008 entitlements,” it stated.

City staff has not made a recommendation to approve or deny the settlement agreement, the city stated. If approved, it “would lead to an amicable resolution,” it stated.

Public testimony will first be heard by in-person attendees at the June 23 meeting, followed by testimony from online attendees. The city also accepts public comment via email at participate@ketchumidaho.org.  

“This is not a done deal. We really want to first hear from the public on this.”

Let's leverage the last recall effort and get the additional signatures quickly. Is everyone tired of the lies?

You need to organize, create an email list. Find like minded people to help. One brick at a time.

Perry, Summertime is the best time to start the recall of Mayor Bradshaw. Everyone will be in town. The hotel project already got more than they should have, now they want more. Bradshaw is ruining Ketchum

Personally, Jack should be receiving accolades for standing his ground on this. This project has been his baby for years and he never walked away even after being drug through the mud for years. I back Jack!

Another terrible project which will continue to alter the ambiance in Ketchum. Why do you people vote for these on the City Council?

2008- Ketchum City Council approves the project in one meeting. 2018- Council approves 4th extension, and accepts a bond for remediation if not built- insurance company denies coverage for bond. 2021- City provides notice of default and “voids” all approvals for non performance. 2022- public notice of pending settlement agreement under threat of $100M lawsuit by developer who has failed to perform. To obtain a PUD you must provide a public benefit- developer’s benefit is a telescope on the 5th floor. Agreement states if modifications proposed are not granted by P&Z, developer gets his original project reinstated. It also gives him until 2026 to complete his project, 18 years after original approval. What’s wrong with this picture? The optics of transparency by this City government is and should be suspect. If you care, go to the meeting on June 23rd, and let your voice be heard- the developer will surely have his minions there! Something is seriously broken in Ketchum.

Mr. Simon, as a former Ketchum Mayor, what are your thoughts on the Marriott? Thanks.

That is one butt ugly building!!

That is way too tall way too big. That would be what we see as we drive in to Ketchum. Please everyone don’t let this happen again‼️

The Marriott is taller.

Remember Bariteaus building on Sun valley Rd, was it the Devils Bedstead renovation? That was a style that really was appropriate for the community, log and wood with interesting design elements, an interesting building set back from the street. Now what we get, stacked shipping containers that tower over the community.

What's needed is designs that are really are mountain designs.

Given his pathetic track record, Ketchum should NEVER give Bariteau authorization for any further projects of any sort, not now or EVER. PERIOD.

PEG told the city in its last public presentation that it would open up jobs in its Ketchum property to workers from all over the country. Consistent with Ketchum’s zoning requirement (one of the few this hotel conforms to) it will house about 20% of its workers on site. The rest will compete with everyone else in the valley for housing. Some portion of them will qualify for subsidized housing in Bluebird (at Ketchum taxpayer expense). Is there a link between these two projects?

Please stop lying to us. Please.

In addition Ketchum needs to reset it's value on building design and stop these junky building designed by bankers, accountants and investment vultures.

How ugly is it? It so ugly it should be in Hailey.

Mayor Bradshaw has never been interested in public comment. I would rather look at that hole in the ground than a giant, unwanted ,monstrosity.

I agree. The hole is more attractive than the building.

That's right. The City approves these projects tacitly and then pretends to take public comment. The PEG project set a standard for breaking all of the rules and the Bariteau project was supposed to start over. I think all of the neighbors affected should sue the city for $200 million. Basically, many places will have their values lowered to accommodate two large hotels. Thank you Mayor Bradshaw. You should have not been re-elected. The council has shown zero backbone

There is talk about a recall of the mayor. Any interest?

Not only is this a done deal but something that the city has obviously working on for months. Don’t waste your time. The city will sulk and pretend that they have no options…you can’t get to a detailed settlement like this in a day…if the city cared about public comment this wouldn’t have come out now…

The Marriott is a real issue. Looks like they are about to start construction. First mass market chain hotel for Ketchum. The biggest hotel. Right at the entrance to town. The council threw out the zoning code that was designed to prevent that kind of mass. And there is no housing plan for 3/4 of the workers that PEG plans to import.

The Marriott is even worse. Neil wrote a letter of recommendation for an out of town developer and pretended like public comment mattered…

you realize there are two Best Western hotels in Ketchum, right?

Good point! Then why do we need a third?

By "this is not a done deal," she means "get ready for another 6-story goober." Of course it's a done deal!

Why are the elected officials so incackwards to develop this town? What

“Not a done deal” is exactly what Mr Bradshaw said about Bluebird. Yet the City has given almost a blank check to that developer who keeps coming back for more taxpayer money and keeps getting it.